Today marks the end of an era at Cheltenham Town Football Club as long-standing chairman Paul Baker has informed the Board of his decision to stand down.

Paul has served as Robins chairman for 21 years, during which time the club has undergone a transition from part-time to full-time professional football with four promotions, four appearances in the League Two play-offs and the moment that started it all off - the FA Trophy win at Wembley Stadium 20 years ago this month.

In an email to his fellow directors this morning Paul wrote: "As you will be aware I have been considering my position as Chairman for some time now and this has been one of the most difficult decisions I have ever had to make.

"There will never be a good time for me to stand down. I have wanted to do it before but circumstances have conspired against me, such as the very sad passing of Colin Farmer and our narrow avoidance of relegation last season. I have always put the club first.

"But now I want to channel my energy and time into other things. My re-election [to Cheltenham Borough Council] last Thursday gives me an opportunity to take a more responsible role on the Council, something I could not consider if I continued as Chairman or Director. I am enjoying my new role as a School Governor, my business is growing and I would like to spend more time with my family.

"I have had 20 plus years at CTFC, my role has taken up a huge amount of time and money and emotion, I have loved it, it has been a huge privilege and an honour and I do believe I have made a difference but only because I have enjoyed tremendous support from my fellow Directors.

"I also feel that the current Board collectively is very strong, very able and very capable of taking the club forward in a sustainable way. It has a tremendous range of skills, as good as any business. Above all you are, first and foremost, fans of the club.

"Furthermore, the club has a very loyal, qualified and committed staff, the best we have had in many many years, it is essentially free of debt and recently received our best ever endorsement as a going concern from our auditors. When I arrived the club was insolvent."

"I will remain a fan, I will hope to attend most games, and I will be on the end of the phone whenever needed." 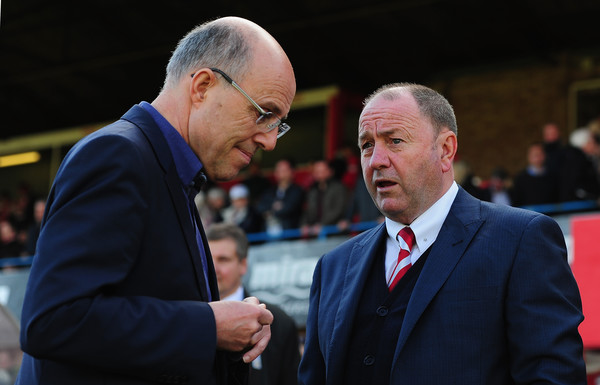 Cheltenham born and bred and a former pupil of the town's grammar school, Paul Baker joined the Board of Cheltenham Town Football Club in 1995. Two years later he took over from Arthur Hayward as chairman following the club's promotion back to the National League (then Football Conference) and one of his first acts was to appoint Steve Cotterill as manager. A period of unprecedented success followed with promotions, cup runs, ground developments and an established place in the Football League.

While the club has endured some inevitable ups and downs during the last 21 years including relegation back to the National League in 2015, the remarkable feat of an immediate bounce-back promotion was achieved only 12 months later.

Vice-chairman David Bloxham said: "Paul Baker's contribution to Cheltenham Town Football Club cannot be over stated. Without him we probably wouldn't be in the Football League and it is a huge testament to him that we have achieved so much over the past 21 years.

"He will be impossible to replace but on behalf of the Board and everyone else at the club we wish him nothing but the best for the future."

Director and Club Secretary Paul Godfrey said: "When I finally finish writing up the history of Cheltenham Town FC the contribution of Paul Baker will be recognised as probably the largest in the whole 131 years since Alfred Close White first introduced football to the town.

"We may have lost our best ever chairman but the magnificent town of Cheltenham still has one of its greatest champions, who is fiercely proud of his roots and will continue to do all he can for the people who live here."