One hundred years since the death of Walter Tull - one of the country’s first black professional footballers and the first man of black heritage to become an officer in the British Army - the EFL is backing ‘Tull 100’, a commemorative project celebrating Tull’s legacy which will officially launch on Monday 26 March.

In conjunction with the Ministry of Housing, Communities and Local Government and Big Ideas, the EFL is encouraging Clubs, Community Trusts and fans alike to take part in the Tull 100 project to undertake initiatives which promote inclusion in the community.

The initiative will offer small scale funding to organisations including local community groups, schools and football teams, amongst others, and the EFL is backing Tull 100 in order to spread the “no barriers” project message across the country.

Having started his football career playing for Clapton and Tottenham Hotspur, Walter Tull went on to make his name in the professional game at Northampton Town where he made over 100 appearances for the Cobblers before the outbreak of war in 1914. 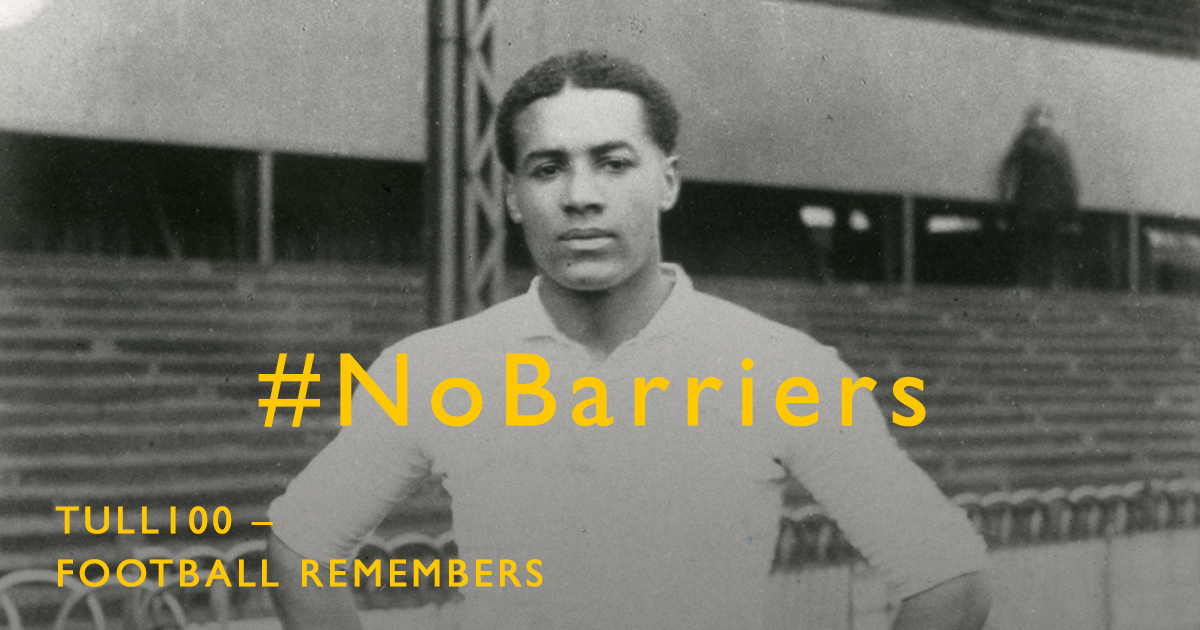 Tull was killed in action while leading his men on the Western Front on 25 March 1918, his body was never recovered. A century on from his death, the project will launch with the aim to inspire others through his memory.

Northampton Town will be celebrating the legacy of its former player with various commemorating activities taking place, including the laying of a wreath by chairman Kelvin Thomas and manager Jimmy Floyd Hasselbaink at the Arras Memorial in Northern France.

The Cobblers chairman and manager have also recently visited the field in France where Tull lost his life to learn more about the story of one of Northampton Town's most remarkable players. The club will dedicate the Charlton Athletic home game on Good Friday to Tull, with activities planned including a pre-match service at the Walter Tull memorial at Sixfields, a special edition of the matchday programme and a period of silence before kick-off. Before then, the community of Northampton will also remember Tull with a special service at All Saints Church in the town, which will include a reading from club chaplain Haydon Spenceley, on Sunday March 25, the 100th anniversary of Tull's death.

Meanwhile, the Club's Community Trust are currently running very special Walter Tull workshops in schools commemorating his achievements and highlighting the importance of inclusion and diversity.

EFL Chief Executive, Shaun Harvey said: “Walter Tull was an extraordinary individual and his story is deeply rooted in the heritage of the EFL through his career at Northampton Town, with the Walter Tull memorial proudly positioned at Sixfields Stadium.

“It is important that his life continues to be recognised as he is one of football’s true heroes.  The EFL is therefore proud to commemorate his achievements at this landmark time, coming 100 years after he lost his life.”

In addition, the EFL, FA and Premier League will collectively be reactivating the Football Remembers initiative for the Armistice 100 commemorations in what is the final year of the First World War Centenary.

Initially launched in 2014 to commemorate the anniversary of the beginning of the war in 1914, each of the three footballing bodies will be supporting Tull 100 in a variety of ways under the Football Remembers banner. Other First World War Centenary initiatives will be announced by the football family throughout 2018 as part of Football Remembers.

To find out more about the project visit www.big-ideas.org, email tull100@big-ideas.org or watch HERE.