A host of celebrities are set to descend on the LCI Rail Stadium in March for a special football match – as they aim to raise vital funds for the Midlands Air Ambulance and British Heart Foundation.

The match – organised by Sellebrity Soccer – promises to be a fun-filled occasion for all the family as two teams made up of celebrities take to the pitch at the home of the Robins on Sunday, March 25 (kick-off 3pm).

The match is being held in conjunction with the Lewis family. Karen and Richard’s son Ben was injured in an accident on the M5 in Gloucestershire. They have been working with the club to organise the game to raise funds for the Midlands Air Ambulance.

Money raised will also go to the British Heart Foundation – one of Cheltenham Town’s official charities for this season.

Celebrities scheduled to play on the day so-far include*:

“We have worked closely with the Lewis family to arrange the fixture and it is a huge honour for Sellebrity Soccer to bring this celebrity match to the LCI Rail Stadium for these two amazing causes.”

VIP packages are also available for £40, and includes a meet and greet opportunity with the celebrities. Call 01242 573558 for more details and to book.

They will also be online by clicking HERE, with a £2 booking fee per order. 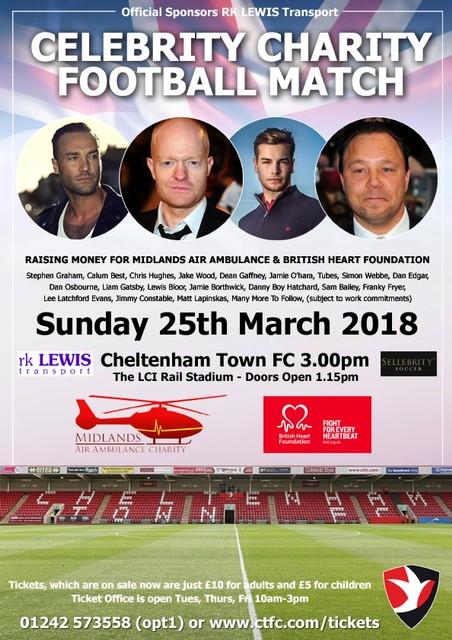