This season we are celebrating 20 years since Cheltenham Town lifted the FA Trophy with a series of 'Road to Wembley' features with the players and staff from the Robins of 1997/98. Here striker Dale Watkins reflects on his memories of the season...

Electrician Dale Watkins was the man who sparked Cheltenham Town’s FA Trophy cup success – but he admits it was lights out for him during the big Wembley celebrations after the most memorable day in his goal-scoring career!

Watkins remains a cult terrace hero at the Robins, a free scoring sensation who hit the floor running after his move from cross county rivals Gloucester City in 1997.

He scored 29 goals in his first season at Whaddon Road before injuries began to bite and admits, even two decades on, the club remains close to his heart.

“Cheltenham’s result is one of the first scores I look for on a Saturday,” said Watkins, who still keeps in touch with a number of his former team-mates.

“I’m a Liverpool fan but the club has a strong affinity for me, it was a good time in my career, full of memories and we had a little bit of success.

“I had a great relationship with the manager (Steve Cotterill) – most of the lads did. His man management was excellent, you would run through walls for him. He was excellent with the lads who weren’t involved too, he kept us together.”

Watkins arrived at Cheltenham in the summer of 1997, a player who needed little introduction in non-league circles after an earlier spell at Rushden & Diamonds that started in 1993 and saw him net an impressive 98 goals in 162 games.

His career had actually started at Sheffield United, with loan spells at Grimsby Town and Rotherham United before joining Peterborough United. It was in the summer of 1991 that he first dropped down to non-league football with Peterborough City and Wisbech Town before joining Grantham Town.

It is, however, his spell at Cheltenham that the striker, now based back in his hometown of Peterborough, rates as the best of his career.

“I scored more goals at other clubs, but at the Robins I was a better all-round player. I was involved in the build-up and it was probably what the pundits would call my prime,” said Watkins, who runs his own electrical company.

“Wherever you go you try and score – if you do it helps with the fans,” he laughed. “I had a good partnership with Jason Eaton that first season. I was full of confidence and when you’re like that you score tap-ins and 40-yard screamers. They all go in during those spells!” 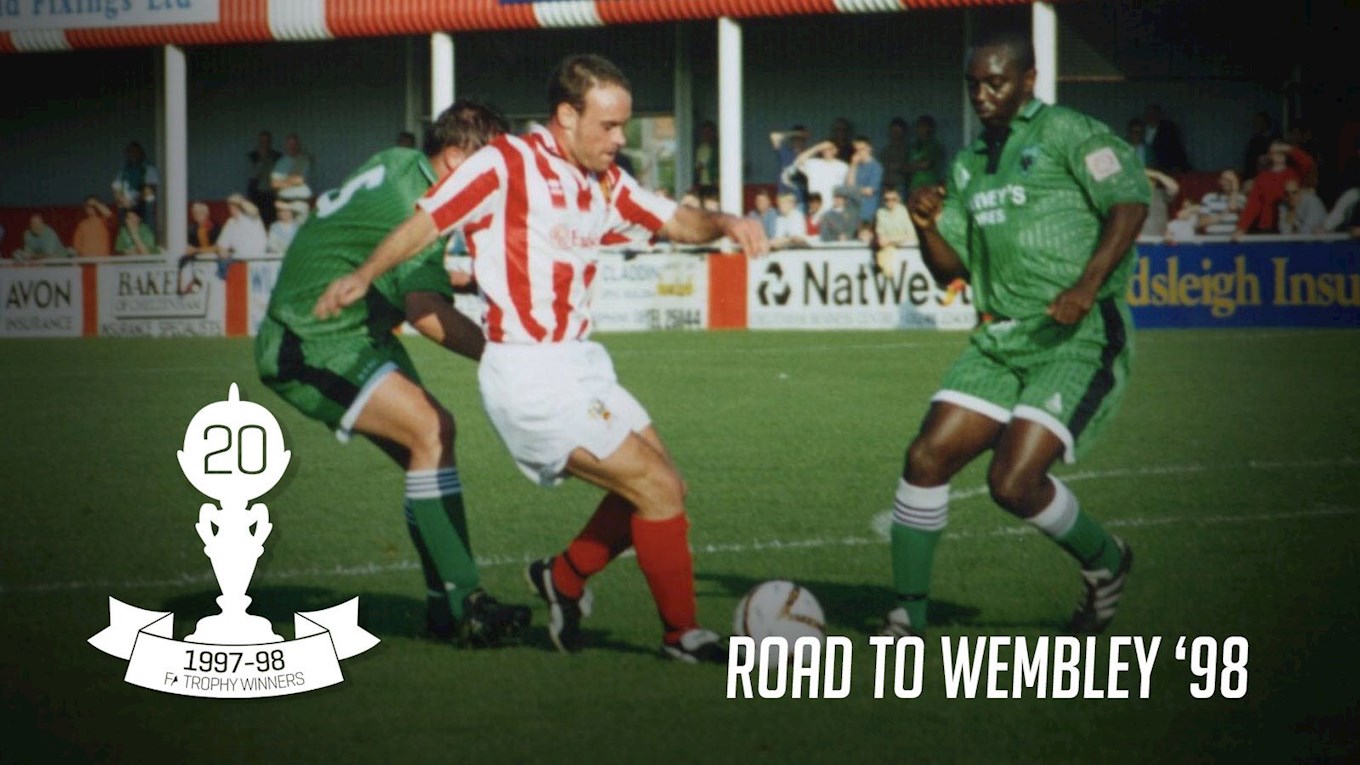 Watkins still regards his time under Cotterill as a time when he experienced his greatest moments – not only as a key member of Cheltenham’s promotion push, but at Wembley for the FA Trophy triumph over Southport in 1998.

“Every non-league players looks at the FA Trophy as a route to Wembley – and I was never going to play there for England,” he laughed. “It was an obsession of mine, especially because I got to the semi-finals three or four times and kept missing out.

“As soon as you get to the last 16 you still to dream it. That season we always looked capable of a cup run and I think we all thought deep down we could do it.

“The day itself was special – I think I took three coaches myself full of family and friends!

“People tell you to take it all in; with all the nostalgia, atmosphere and the Wembley twin towers it’s easy to let it sap your energy. You’ve got to try and not get too excited and I felt I handled that side.

“It was everything I dreamt it would be. From the changing rooms to the pitch, it’s a day you don’t forget. As for the game, I remember Southport creating more chances and I remember them going through one-on-one with Bookey (Steve Book) standing tall to deny them.

“The fans didn’t see the best of me and Jason (Eaton) that day, but we had one chance and he took it. After that we worked our socks off to keep it and lift the trophy.”

As for the celebrations, Watkins admits the night after was not so much a blur as a moment missed. “I never drank that much but on the bus on the way home I drank some champagne and by the time I got back to the team hotel my head was spinning.

“I went to my room and decided to have a quick two-minute power nap. Next thing you know it’s the morning – I missed it all and nobody came to get me,” he joked. “I guess that’s my only regret, but I more than made up for it on the bus tour with fans around the city!”

More success followed for Watkins and Cheltenham when they returned to the Football League the following season. “It was great to achieve that too, you always want to prove yourself at a higher level and having been released by clubs it was always my ambition to get back.”

There was certainly no major falling-out when Watkins later left Whaddon Road in 1999 and moved to Kettering. And to this day he remains a true hero to many Cheltenham fans, a man to this day dubbed ‘Super Dale Watkins’ on the terraces and about whom legendary stories remain told.

“Don’t believe all the stories you hear about me,” chuckled Watkins. “The lads like to twist them to poke a bit of fun. I’ve heard them all. The one people always remind me of is the game away at Farnborough… when I went to the wrong Farnborough – that is true!

“We didn’t have Sat Navs back then, you went by maps and written directions, so I ended up in the middle of London in the wrong place totally. That was an interesting call to the gaffer and I’ve never got across the capital so fast!

“People still laugh about it now and I guess that is what we always had at Cheltenham that was special – we could have fun and smile, but always get the job done. It was a special season in 97/98 and the memories still make me smile to his day.”