For the first time in their history, Cheltenham Town are turning blue – but don't worry, it's all for a great cause.

The Robins will wear a one-off blue strip for the next month's match against Crewe Alexandra to raise awareness of the British Lung Foundation, the only UK charity looking after the nation’s lungs.

The idea is the brainchild of the Robins Trust, who have worked closely with the club and the charity in creating a event to put on a show of togetherness for the club's fitness coach Ian Hutton and his fiancee Vicky Veness.

The 30-year-old personal trainer, runner, non smoker and healthy eater received the shock diagnosis despite looking perfectly fit and healthy and has set out to challenge preconceptions about the illness.

We wanted to play our part and we hope that by turning blue for one match only we'll be able to create more awareness of this important cause, and raise vital funding in the process.

We want the community to come together and get behind this idea – in blue of course – from the stands.

Chairman Paul Baker said: "We are delighted as a club to come together as one to show our support for the British Lung Foundation and, of course, our coach Ian Hutton and his fiancée Vicky.

"We hope the move from our traditional colours to a striking new one-off blue kit, the colour of the charity, will give a very visual show of support and raise both awareness and vital funds for this important cause."

And Gary Johnson has embraced the idea, having being personally affected by the disease: "It is going to be a very special day for the club as we wear a blue kit for the British Lung Foundation and also to show our support for Ian and his fiancée Vicky.

“We know that Vicky is going through a very difficult time and a member of my own family is also struggling with lung cancer so I know exactly what they are going through and how hard it is.

“We are doing something for a great cause and as a football club we are always happy to be able to something like this, especially when it is something so close to home for us.

“It’s a terrible disease and anything we can do to fundraise and improve awareness in this area, by backing the British Lung Foundation. is vitally important. We need everyone to get behind it.

“We will certainly need to get used to playing in blue at home and will train in it before the game, but it’s important that it’s a very visual message of support from everyone at Cheltenham Town."

Murry Toms, Fan Elected Director said: “The important thing about football is that it is not just about football, and this is a great way to show some support with Ian and Vicky at a difficult time.

“This is a simple idea to use the community around the club as a force for good and drive a greater understanding of this disease.

“It affects 85,000 people a year, as well as those closest to them, and at the moment that unfortunately includes two of our own and we want to help in what little way we can.”

The players showed their support for Ian and Vicky back in August during the warm-up for the West Ham United cup match (below), wearing special T-shirts and we used the scoreboard to spread the message. 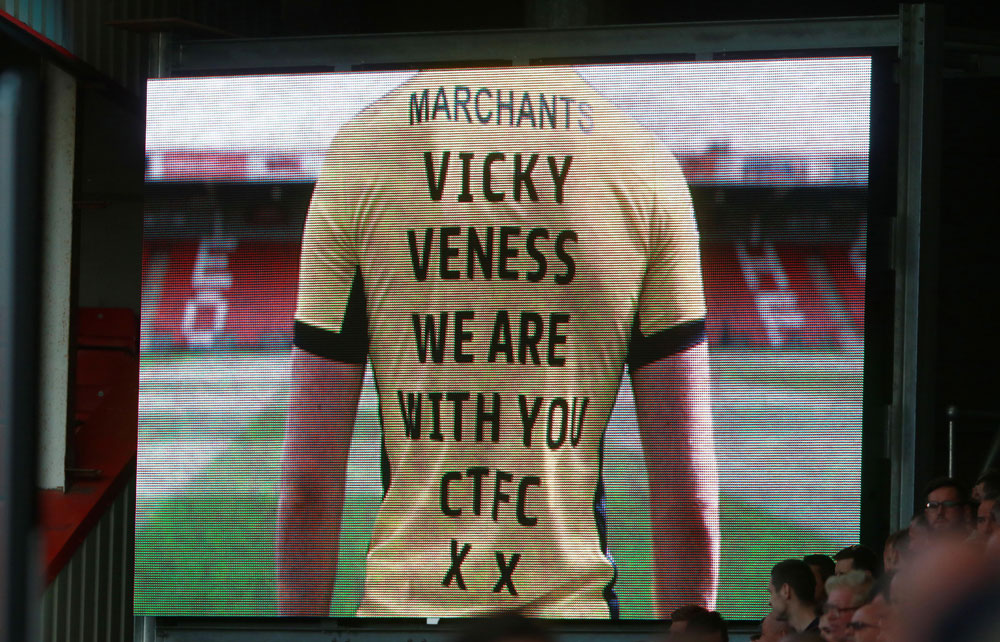 There are 85,000 people living in the UK that have received a lung cancer diagnosis including people living with the condition, those in remission and those who have been cured.

The British Lung Foundation has been researching lung conditions for 30 years and their main aim is always to improve care - and to prevent, treat and cure lung diseases.

“Every week, around 10,000 people in the UK are diagnosed with a lung condition. This means every week, a family member, loved one or friend, will also hear that someone they care for has a serious lung condition.

“It’s thanks to the amazing fundraising efforts of people like The Robins that we are able to continue our vital work, researching new treatments and supporting people living with lung disease across the UK.”

Regular kit sponsors Mira, Marchants and RK Lewis have been fantastic in allowing the British Lung Foundation logo to become the sole sponsor for the day, pride of place on the chest of the shirt.

For that we thank them for the amazing support.

Kit suppliers Errea have also played a big part in making it happen, producing a kit for our squad at short notice.

Tim Bernard, the MD at Errea said: ”Errea Sport are delighted to have been able to play a small part in supporting such a worthy cause and wish the club and the event organisers all the best for a successful day."

How supporters can get involved

Our aim is to drive awareness of the work done by the British Lung Foundation, and raise vital funds.

In the coming weeks we will be helping the charity to raise awareness of the illness across all of our channels from the website through to the matchday programme and scoreboard, and we urge fans to read and share them.

We will ask supporters to swap red and white for wear blue at the game, bringing red balloons to show solidarity.

We will be revealing the distinctive blue kit next week and a limited run will be available in the shop ahead of the match, with a suggested donation of £5 towards the charity with each purchase.

There will also be a bucket collection on the day, plus a special Robins Trust party.

The 'Blue Christmas' Fans Fest will feature local legend DJ Shippers in the bar to build the atmosphere before the game.

Afterwards the Trust will auction one of the match-worn shirts in the bar, and everyone is invited to come along and take part. At the same time the man-of-the-match shirt will be auctioned in the commercial boxes, where the star player is usually selected.

The remainder of the squad's shirts will be auctioned online to raise more money for the charity.

We will be releasing more details on everything in the weeks to come, so keep your eyes peeled.

Supporters can donate £3 to the British Lung Foundation by simply texting CTFC17 £3 to 70070, and every penny will go directly to the charity. It's open now and will remain so until after the game on December 9. We can make a difference today.