The big fixtures keep on coming for Cheltenham Town in League One with a trip to Sunderland's Stadium of Light up next on Tuesday night (kick-off: 7.45pm).

It's 16 years since the Robins last faced Sunderland at their impressive stadium in the north east in a League Cup game, with Tuesday's clash the first ever league meeting between the two clubs.

Having faced top of the table Wigan Athletic on Saturday, there's no denying the challenge of the task that awaits the team again against a Sunderland side tipped for promotion to the Championship.

The squad will travel though aiming to deliver a performance to add to a pleasing start to the season while backed by a loyal army of fans making the 518 mile all-round trip to the former top flight side.

Defender Charlie Raglan will miss the trip as he's yet to reach full fitness on his return from an injury.

Forward Kyle Vassell (pictured) will be assessed after picking up a knock in the match at Wigan Athletic.

Will Boyle is unavailable through injury. Callum Ebanks is back in training having returned to fitness. 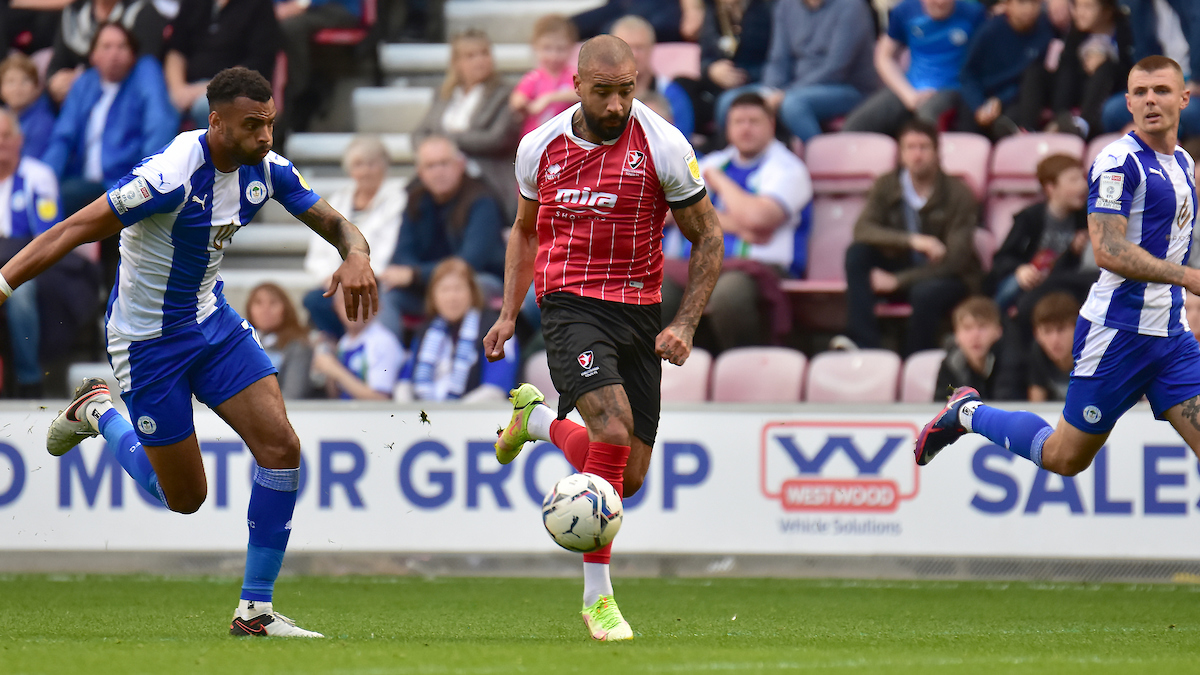 Ahead of Tuesday's game Michael Duff has been praising his side's start to the club's first League One campaign since the 2008/09 season.

He said: "We've won three, drawn three and lost three and other than this Saturday we've been competitive in every game.

"The start has been a positive start. It's our 14th game of the season and we've had four games at home. We've done a lot of miles and travelling.

"If you had offered anyone this start they would have taken it."

Watch the full interview with the Robins boss for free on iFollow.

Midfield man Liam Sercombe has also been looking ahead to the game. Watch what he's had to say on iFollow. 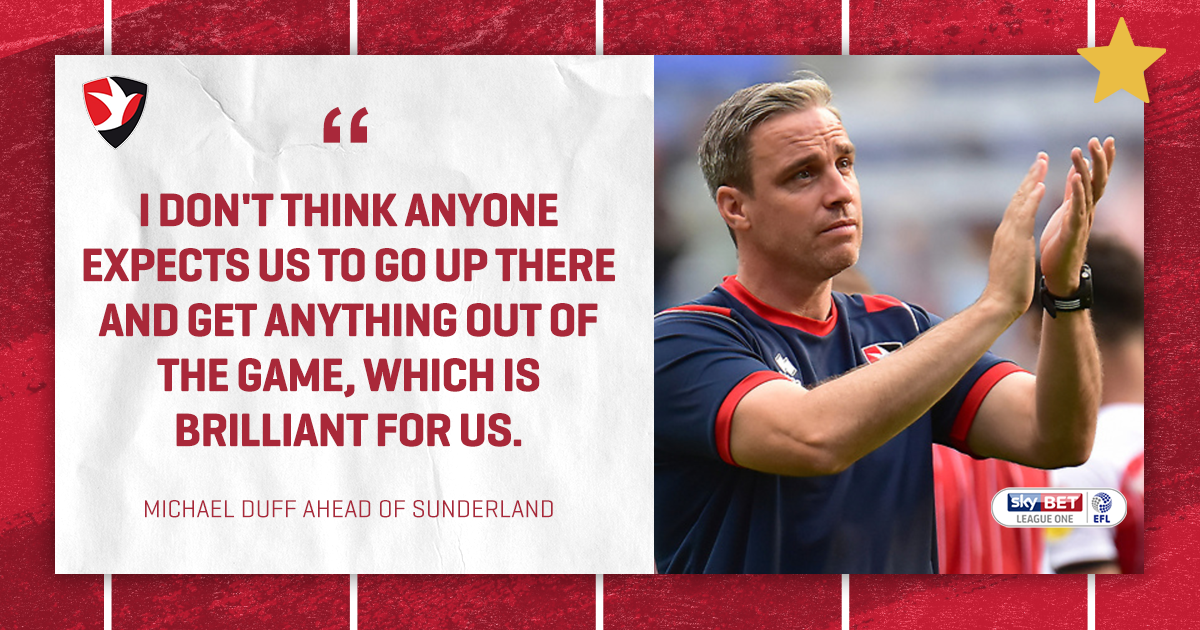 Except for a loss at Burton and away draw at Fleetwood, Sunderland have won all of their League One fixtures so far, so it's unsurprising to find them positioned second in the division as they aim to secure promotion to the Championship this term.

They boast a glittering squad at this level with full internationals backed by an impressive home support at their 49,000 capacity Stadium of Light home.

It was 2017 when they were last in the Premier League where their stay ended after ten consecutive seasons. They suffered back-to-back relegations when they dropped out of the Championship in 2018 and this is their third season in a row at this level.

In midfield former Huddersfield Town man Alex Pritchard is one to watch, as is England youth international Elliot Embleton who has played against the Robins previously while on loan at Grimsby Town. Wide attacker Aiden McGeady has 93 caps for the Republic of Ireland having enjoyed a career with the likes of Celtic and Spartak Moscow.

Sunderland boss since December 2020, Lee Johnson is already in his fourth different managerial role as a 40-year-old having taken on his first position in 2013 when he was appointed manager at Oldham Athletic.

Since then he's managed Barnsley and Bristol City before taking on the role at the Black Cats who he led to last season's Papa John's Trophy title.

A midfielder in his playing days, he turned out for the likes of Yeovil Town, Hearts, Bristol City and Kilmarnock. 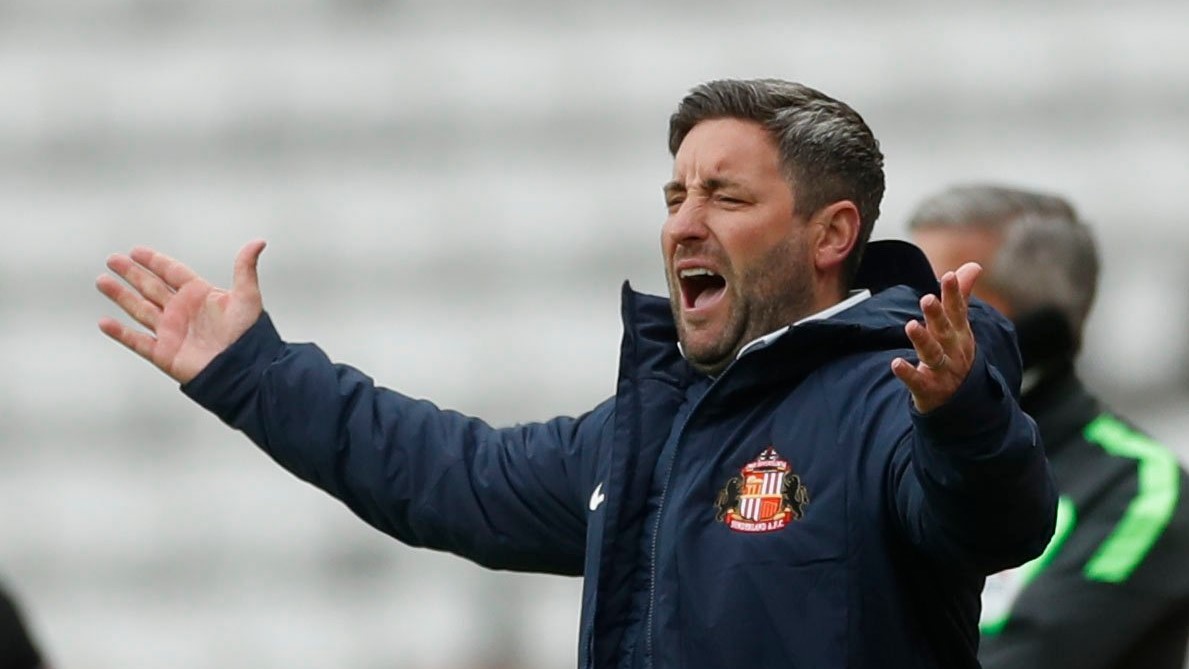 The one previous meeting between Sunderland and Cheltenham took place at the Stadium of Light in September 2005.

The first meeting between the two clubs came in the League Cup second round, and Sunderland, who were a Premier League side at the time, needed an extra time winner to make it through to the next round.

It arrived on 92 minutes when Anthony Le Tallec, on loan from Liverpool, pounced to score to seal a 1-0 win - a result that saw Sunderland take on Arsenal next time out. 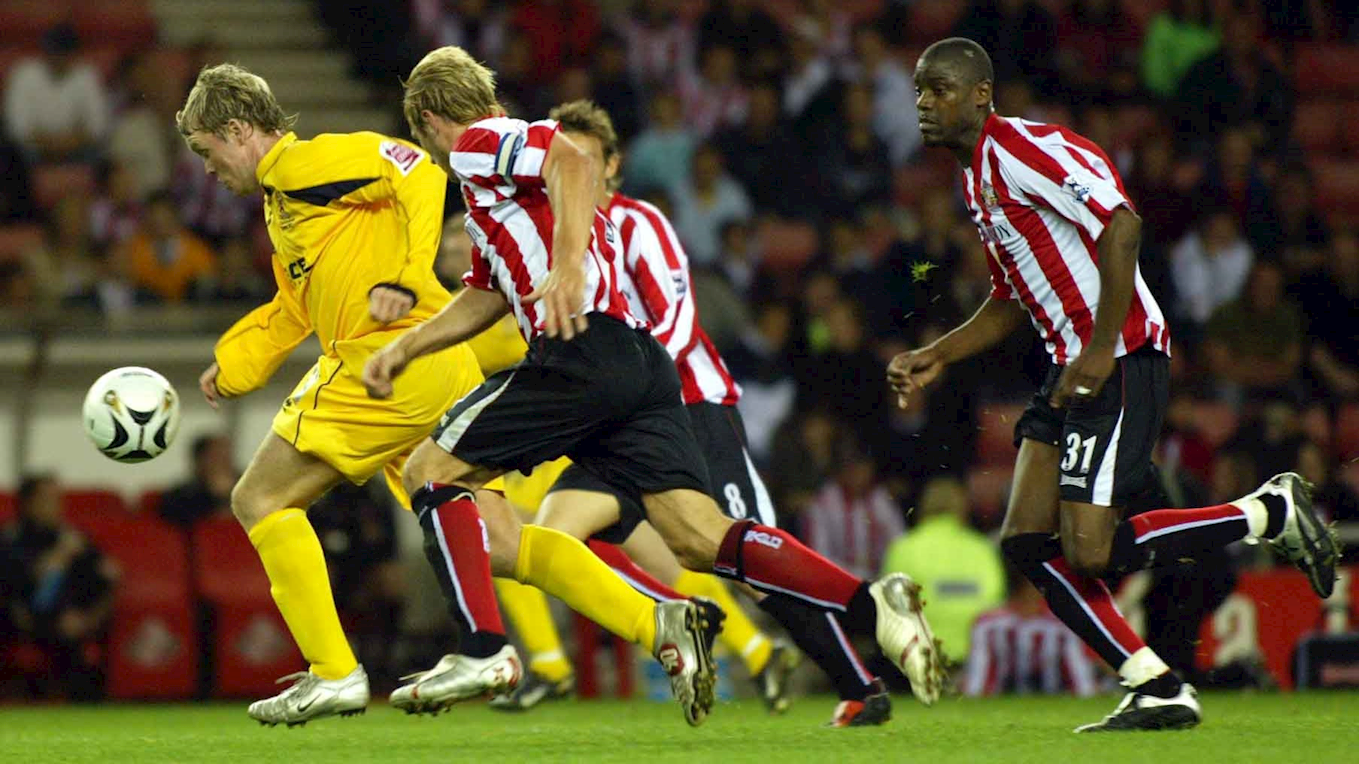 All tickets for the game must have been purchased in advance of the game. There are no sales on the day.

Cheltenham fans who have purchased tickets will be located in the North Stand Upper, tier 3.

Supporters booked onto the Travel Club coach are reminded that it leaves from the Jonny-Rocks Stadium at midday. There will be a service station stop on the way.

Any tickets that have been purchased but not collected will be available from the Sunderland ticket office in Black Cat House.

The Stadium of Light is a fully cashless venue.

Cheltenham Town completed a marathon week of matches in the north with a comprehensive defeat by Sunderland.

Michael Duff's men have travelled more than 1,000 miles in seven days to face Preston North End of the Championship and two League One giants in Wigan Athletic and Lee Johnson's side here at the hugely impressive Stadium of Light.

True, they were missing key players through the spine of the team with the likes of Will Boyle, Callum Wright and Kyle Vassell missing, and there is no doubting Sunderland's title credentials.

But Duff's depleted side were the architects of their own downfall on Wearside with all the damage being done before the break.

"I've said all along that could happen," Duff said afterwards.

"We've had a really tough week and we've got four or five big players that aren't available.

"When we come to clubs like this we have to do more but we can't carry those type of injuries when you come to these type of places.

"We looked young and naive today. The frustration is we've conceded from two set pieces again, and we don't look like scoring from a set play so it's difficult.

"They're not in our league. We know that. If anyone expected us to come to these last two games and take points they would be optimistic.

"We have to do more. We have to fight more but it's not all doom and gloom. We'll stick together and learn." 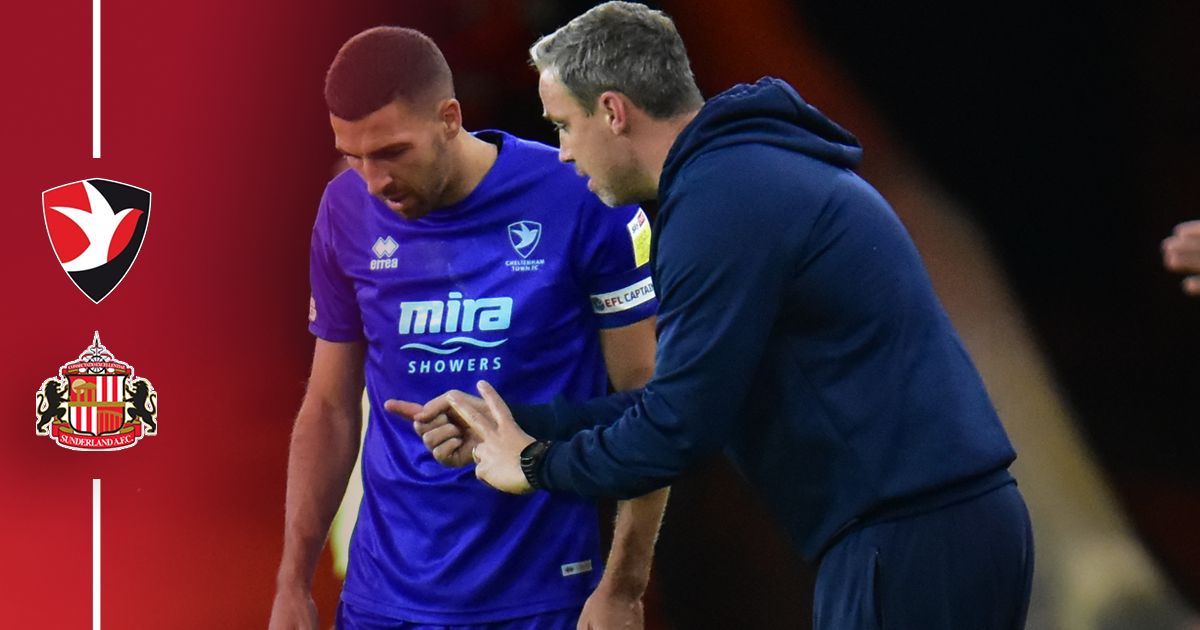 It was already going to be an uphill task against the former Premier League outfit but a series of sloppy mistakes handed the the Black Cats a three-goal advantage at the interval.

Sunderland were dominant from the start and Mattie Pollock was called into a pair of last ditch clearances in the opening exchanges which lead to the first corner of the game.

From there Bailey Wright headed the hosts into an early lead, meeting Aiden McGeady's corner from the left with a downward header to beat Scott Flinders with 11 minutes on the clock.

Pollock was a whisker away from an immediate response with a header of his own but it dropped inches over the bar, his side's only chance of the opening 45 minutes.

The second arrived after a mistake by Lewis Freestone, gifting the ball back to Winchester who found Ross Stewart in the centre and he made no mistake.

Stewart then guided McGeady's cross over from a great position in the centre before heading another over moments later. 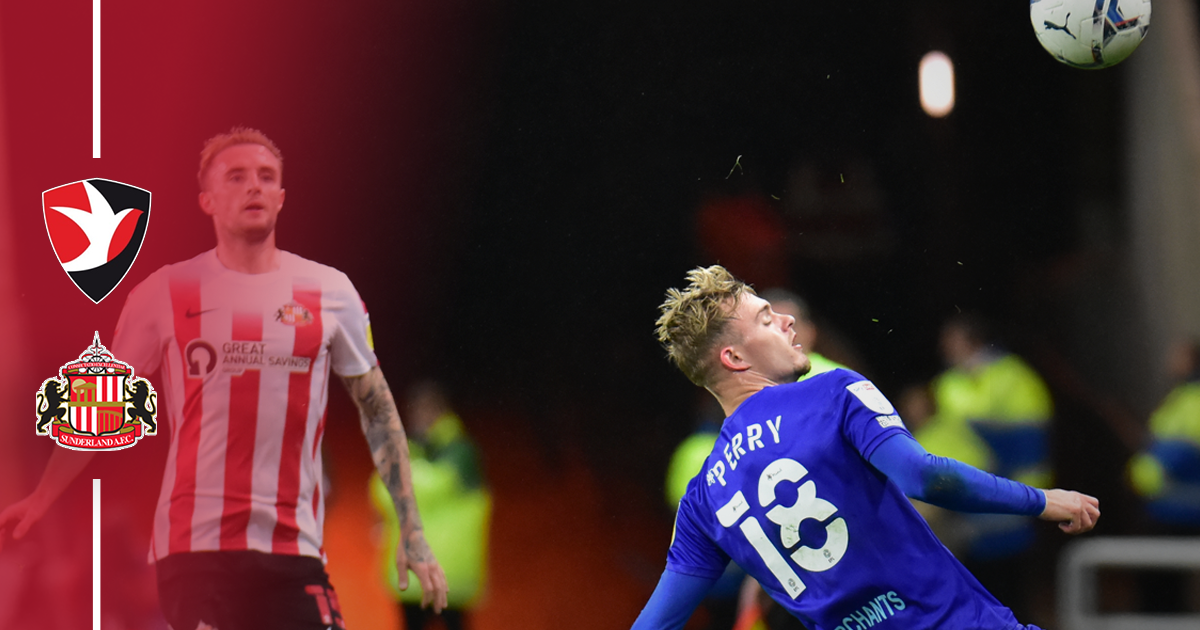 But he added the third seven minutes before the interval, this time meeting Carl Winchester's centre to complete the easiest of finishes.

Broadhead should have made it four on the stroke of half-time but he blasted high and wide.

Alfie May replaced Pollock at the interval and Duff reverted to a 4-4-2 formation for the remainder of the game, matching Lee Johnson's side.

May vollied the first chance of the second period a couple of minutes after the restart but at the other end, Sunderland continued where they left off with a chance for Stewart, who was denied by a diving tackle by Sean Long.

However the fourth and fifth goals arrived in quick succession through Luke O'Nien and subsitute Leon Dajaku to put the seal on a big win for the promotion hopefuls.

It was Duff's heaviest defeat as manager and a steep learning curve for these players but they must now must quickly prepare for this Saturday's match against Rotherham United. 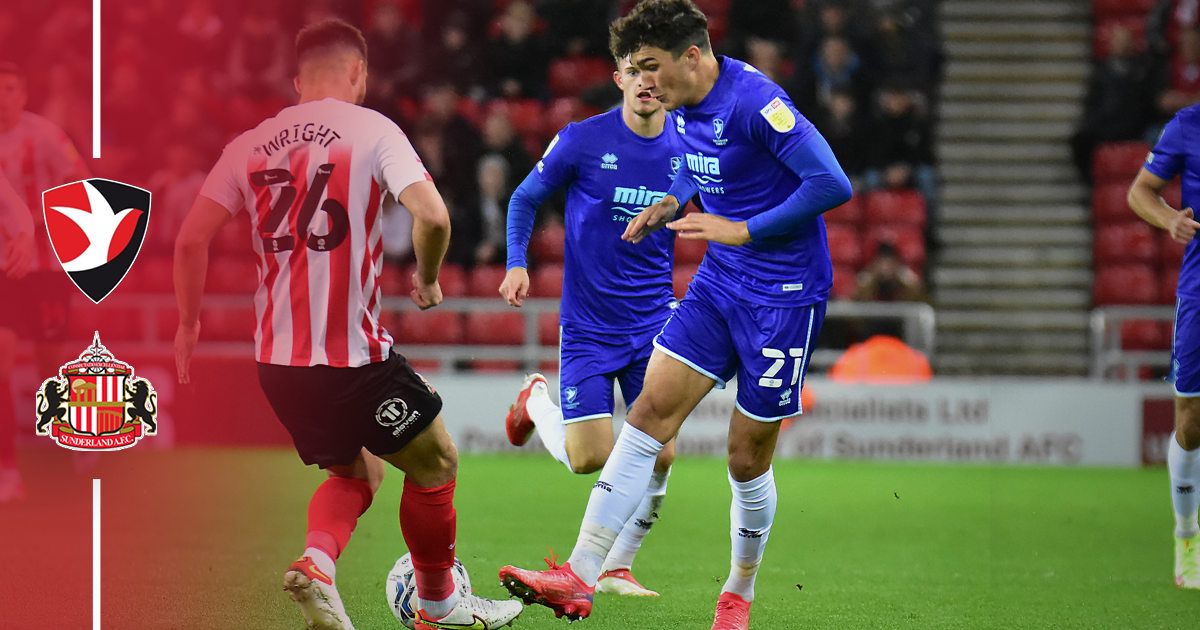 Tickets and away travel for the League One match at Sunderland on Tuesday 28 September are on sale.

Supporters can buy tickets and away travel through the ticket office - both in person and online.

All tickets must be purchased in advance. There will be no sales on the day.

Robins fans will be located in the North Stand Upper, tier 3.

The Travel Club coach heading north will leave from the Jonny-Rocks Stadium at 12pm. There will be a service station stop en route.

Travel Club members who have regular seats will have these held until 3pm on Thursday when they will then be released for general sale.

Cheltenham receive 5% of income for all tickets sold through the Robins.

Any uncollected tickets will be available to pick up from the Stadium of Light on the night, located in Black Cat House at the Sunderland ticket office.

The stadium is fully cashless. 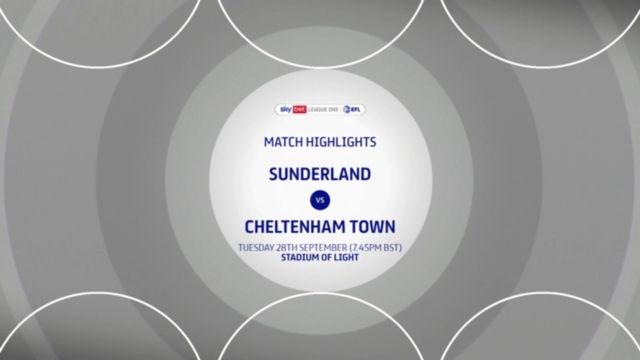 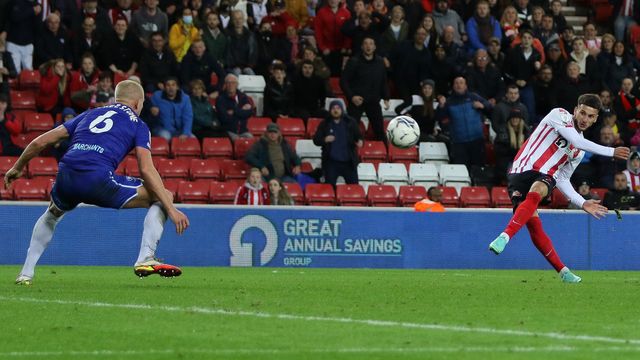