Cheltenham Town and Sheffield Wednesday go head-to-head against one another for the first time in a competitive fixture on Saturday (kick-off: 3pm).

There's going to be a huge crowd at the Jonny-Rocks Stadium for Wednesday's visit to Gloucestershire.

The four time champions of England and three time FA Cup winners offer a stern test for Michael Duff's side who will be looking forward to another big fixture in the club's first third tier campaign since 2009.

Tickets for the game are available to buy online and from the ticket office.

With a large crowd in attendance it's strongly advised that supporters who are collecting or buying match tickets on the day should leave plenty of time to do so before kick-off.

For details about ticket collections, off-pitch entertainment and more check out our match information guide.

Outside the stadium volunteers from St John Ambulance will be appealing for donations for their fantastic medical support in the local community, while inside the Robins Nest bar staff are fundraising for Macmillan Cancer Support, so if you can please give generously.

There are no new injury concerns ahead of Saturday's game with just four continued absentees due to miss out. 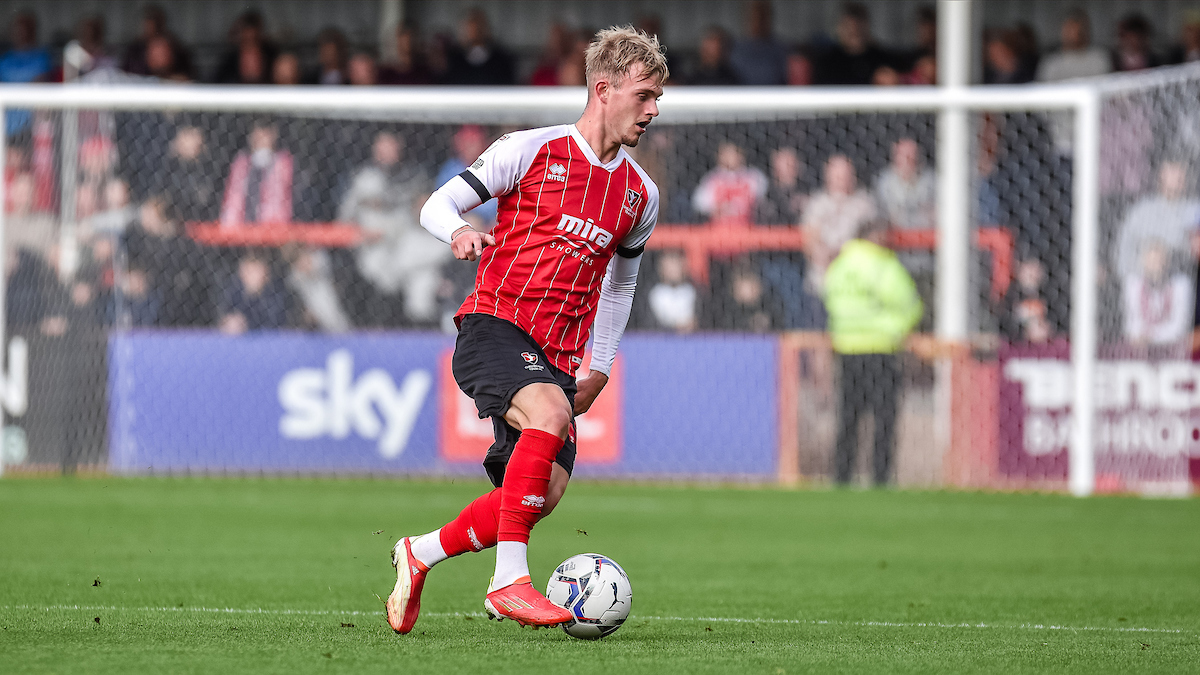 Boss Michael Duff knows Sheffield Wednesday are not far off firing on all cylinders ahead of this weekend's meeting.

He told the press: "They have probably drawn too many for their liking. They're up there anyway but if they'd turned some of those draws into wins they'd be right up there.

"I think when it comes to fanbase and size of stadium Sheffield Wednesday and Sunderland you could argue could be in the top ten in the country in terms of size. Everything is geared up for them to get back into the Championship and then the Premier League. They would be a big club in the Premier League.

"Darren (Moore) is a very good manager and when you play for a club that size everyone's up for it."

You can watch the full pre-match press conference with Duff by watching on iFollow.

Goalkeeper Scott Flinders has also been looking ahead to Saturday's game, watch on iFollow as he prepares to take on the club he grew up watching as a boy.

Sheffield Wednesday's squad boasts a number of big names at League One level who have enjoyed careers in the Premier League and on the international stage.

Midfield talent Barry Bannan is a Scotland international who has been with Saturday's opponents since 2015. He's played in the Premier League for the likes of Aston Villa and Crystal Palace, while Burundi international forward Saido Berahino was signed in the summer after a spell in the Belgian top flight having impressed early on in his career in England for West Bromwich Albion.

Another Scotland international, Callum Paterson, can recall time spent with Hearts and Cardiff City before moving to Wednesday, while the long-serving Sam Hutchinson is in his second spell having started his career at Chelsea, and goalkeeper Bailey Peacock-Farrell is on loan from Burnley and is currently the Northern Ireland number one shot-stopper.

Appointed towards the end of last season, Sheffield Wednesday is Darren Moore's third club as a manager having taken charge at West Bromwich Albion and Doncaster Rovers previously.

He led West Brom briefly in the Premier League, while he guided Donny to a play-off position in League One before leaving to move to Wednesday.

As a player he was a strong centre back who featured for the likes of Torquay United, Portsmouth, West Brom, Derby County and Barnsley among others. 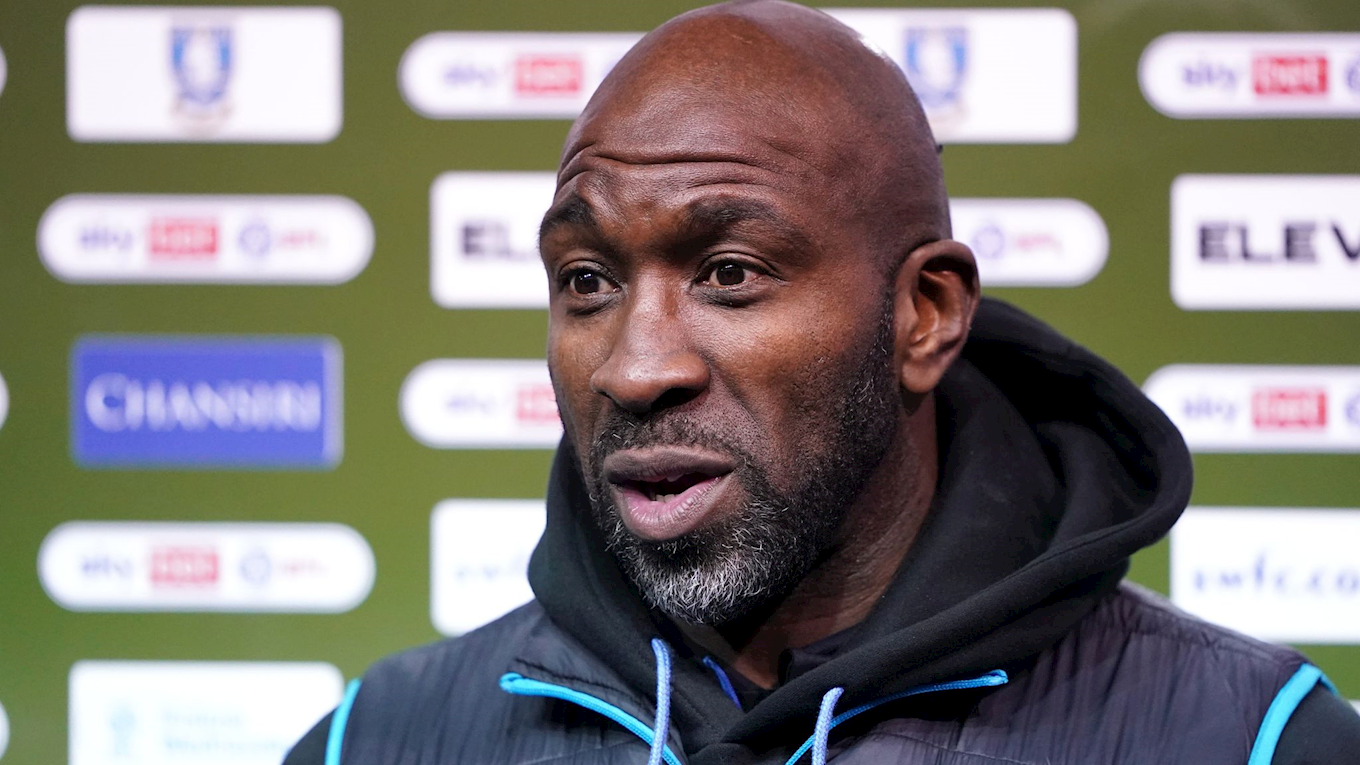 Purchase tickets online before midnight on Friday and you can save £2 on matchday prices.

If choosing to buy on the day, only standing tickets are available, and these can be purchased from the portakabin in the car park.

You can buy tickets all day in the lead up to kick-off from the ticket office, while they will no longer be available to buy online from 12pm.

Fans are encouraged to arrive early to either collect or purchase tickets on matchday because of the large crowd that will be in attendance.

Make sure you get your hands on a match programme for the first meeting between the two teams by buying around the stadium where it's available at a price of £3.

The big interview is with defender Sean Long reflecting on the impact he's made in the backline this season.

There's also the latest from chairman David Bloxham, midfield loanee Taylor Perry discusses his European football experiences with Wolves, Michael Duff previews the fixture and there's a look back at one of the club's stand-out League One wins from down the years to read about plus all the usual bits and pieces too.

The programme is also available to purchase online via the ACA Creative website. 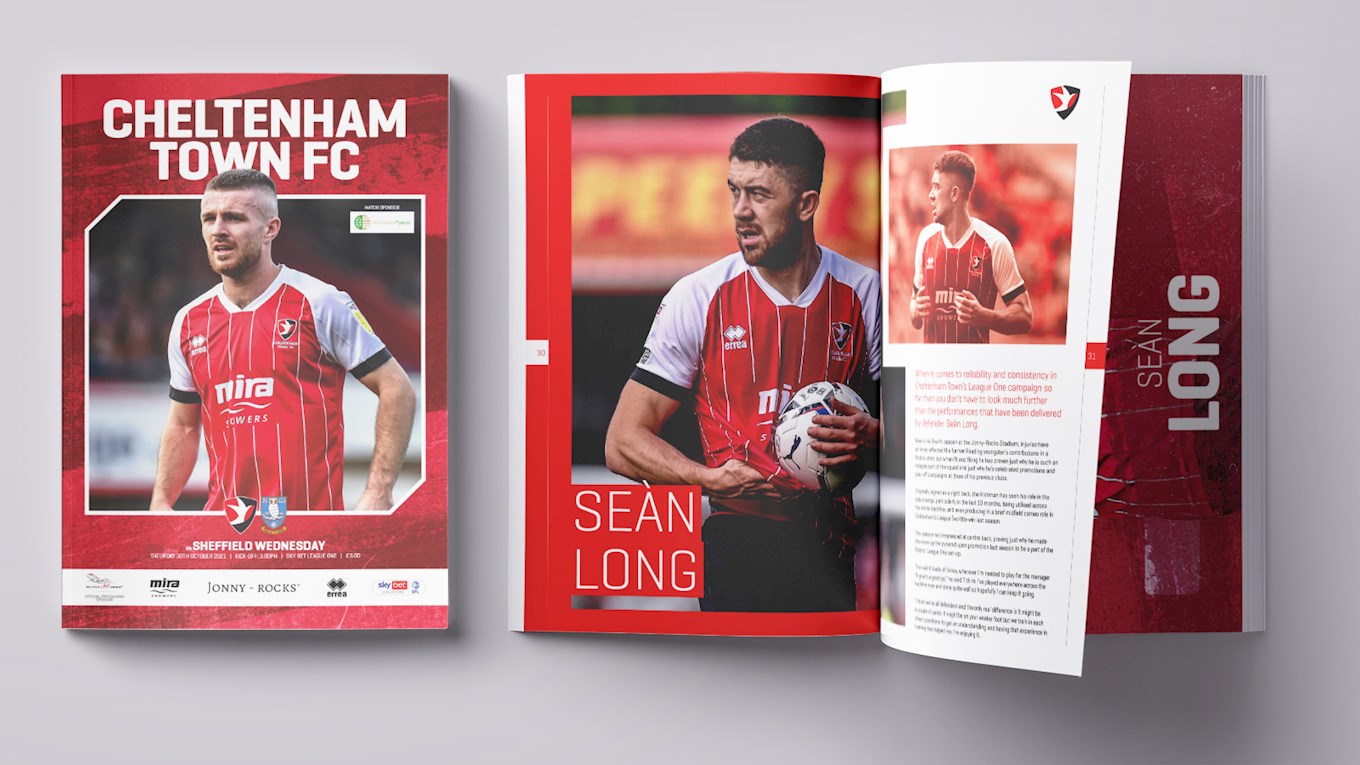 Kyle Vassell opened the scoring with his second league goal of the season on 14 minutes with a half volley from inside the box.

Chey Dunkley scored and then flicked on a header for Blair to concede an own goal to complete a turnaround for the Owls, but then Blair earned the Robins a point with a last-gasp equaliser.

Cheltenham avoided an early scare when Mattie Pollock thwarted Lee Gregory from close quarters with a lunging block to divert the ball behind.

Dan Crowley floated a sumptuous diagonal ball to the back post, which Pollock cushioned down into the danger area. Vassell was deemed to have upended Bailey Peacock-Farrell before crashing the ball against the post.

The Robins began to establish a threat from set pieces with the dangerous free-kick deliveries of Chris Hussey and the equally threatening long throws from Sean Long.

Hussey’s delivery fell invitingly for Long at the far post but his thunderous strike was impressively hoisted over the woodwork by Peacock-Farrell. Wednesday failed to heed the early warning and Vassell scored his fourth goal for the Robins in all competitions to break the deadlock on 14 minutes. 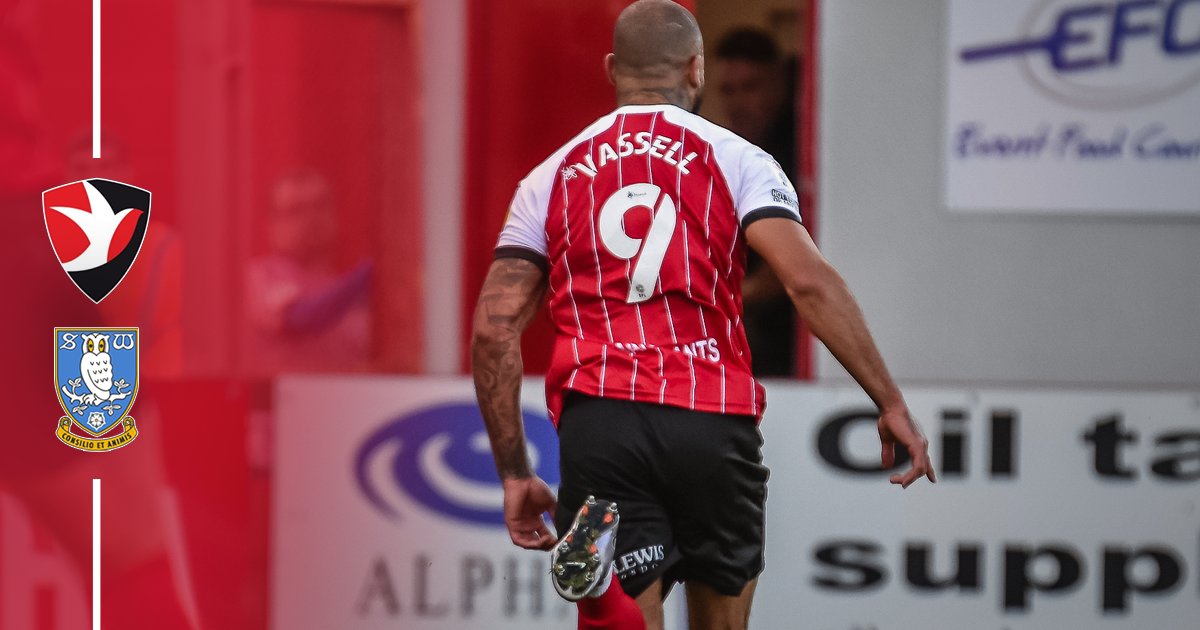 Pollock was influential in the build-up once again. He was sandwiched between two players as he battled for the ball in the air and Ellis Chapman unleashed a low shot towards the target. His strike ricocheted into the path of Vassell, who remained composed to dispatch an emphatic half volley into the bottom corner.

Cheltenham started to apply considerable pressure just before the break but both Flinders and his defence dealt admirably with a series of crosses. Liam Sercombe played exceedingly well, extinguishing fires all over the pitch and slotting into right-back to facilitate the advancing runs of Matty Blair.

The visitors had only their second clear chance of the first half when Callum Paterson scooped Barry Bannan’s cross over the target at the back post.

Wednesday started on the front foot after the interval but Cheltenham nearly caught them cold on the counter-attack. Crowley released Joseph, who was one-on-one with Peacock-Farrell, but his attempted lob was gathered with ease by the Northern Ireland international. 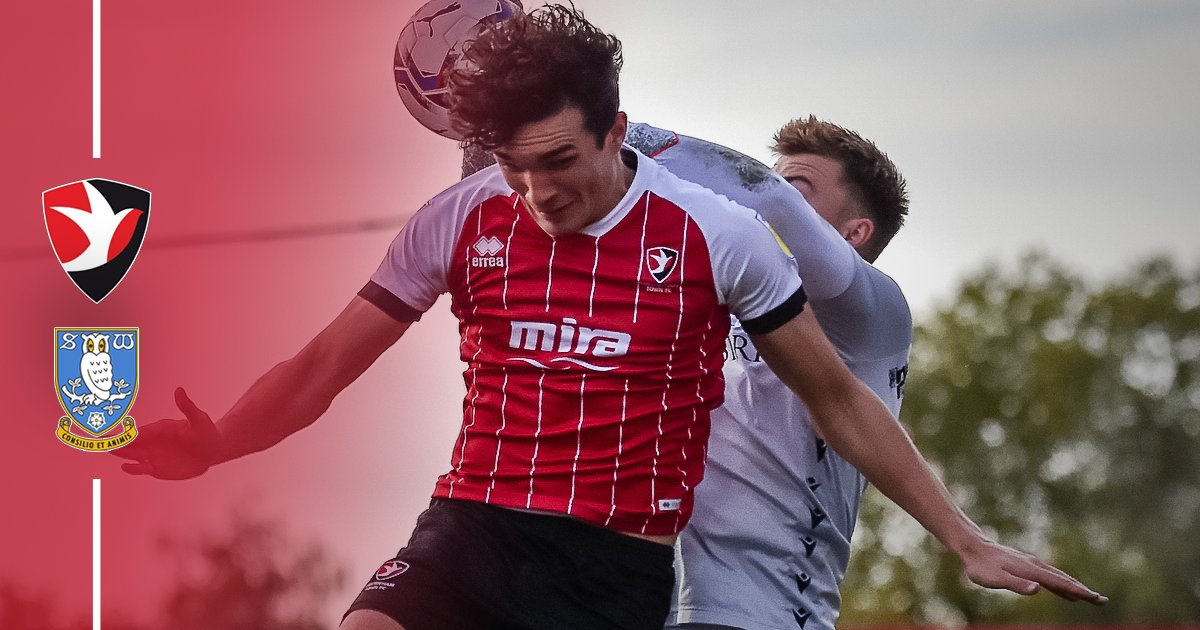 The Owls equalised on 65 minutes when Dunkley climbed highest to head Bannan’s corner past Flinders at his near post. Cheltenham looked to respond quickly but Joseph’s close-range effort was blocked in front of goal.

Joseph was then left ruing his missed chance when Dunkley added his second with eight minutes remaining. Bannan’s free-kick was flicked on into the danger area and Dunkley ghosted away from his marker to loop his header over Flinders via a heavy deflection off Blair.

Michael Duff responded by introducing Christian Norton, who came close when his effort flashed just wide of the far post. But Cheltenham continued to fight and were rewarded when Blair levelled in the first minute of stoppage time.

Pollock knocked down Alfie May’s corner and Blair was positioned inside the box to flick his header past Peacock-Farrell.

Wednesday leapfrogged Burton Albion to move into 8th place on goal difference, while Cheltenham fall to 16th despite avoiding defeat.

Don't miss out on tickets for Saturday's huge League One fixture against Sheffield Wednesday at the Jonny-Rocks Stadium.

The Owls are in town for the first ever competitive meeting between the two clubs at 3pm on Saturday.

It's expected to be the largest attendance yet this season and tickets are on sale right now online and from the ticket office during office hours.

Buy early to avoid disappointment and to receive a £2 discount on the cost of matchday prices when you buy after midnight on Friday.

You can purchase online for the game and then collect your tickets before Saturday from the ticket office or on the day before the game.

With a large crowd expected it is strongly advised that you leave plenty of time getting to the stadium to avoid queues at the ticket collection points and ticket office.

The club car park is already full and there will be entertainment, food and bars open ahead of the game for supporters on the Autovillage Stand side of the stadium. 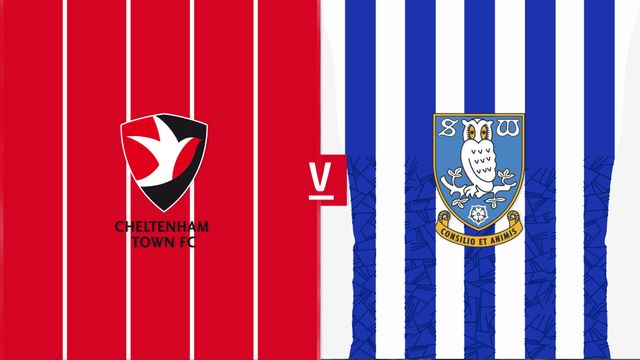 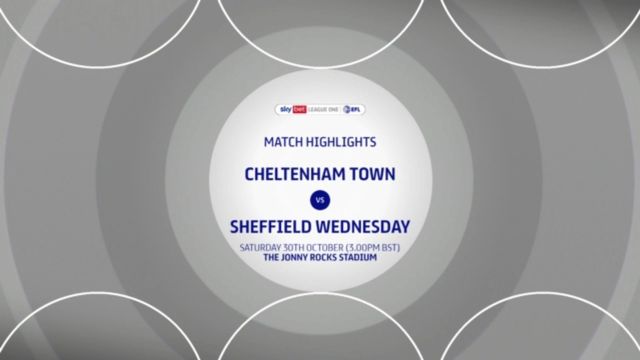 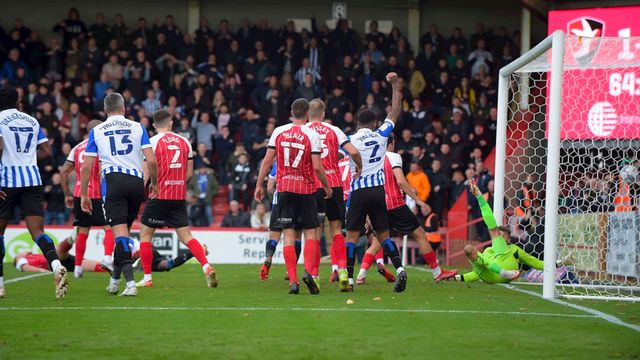