It's a Kids for a Quid matchday at the Jonny-Rocks Stadium on Saturday when Accrington Stanley are the visitors (kick-off: 3pm).

If you buy before midnight on Friday, under-18s can enjoy £1 access to all areas of the stadium for the first meeting between Cheltenham and Accy since December 2018.

Having had a weekend off last week because of the international break, Michael Duff's side are eager to get back into action as they continue their exciting League One campaign with the first of back-to-back home games in four days.

In the build up to the action you can enjoy some of the new food on offer at the Robins Retreat in the car park, while you can also make a visit to the expanded outdoor bar at the Robins Nest where the Cheltenham Town Community Trust will be in position with some fun activities for supporters.

Make sure you're part of the action on Saturday by buying tickets for the game online. Save £2 on matchday prices by buying before midnight on Friday.

Charlie Raglan and Will Boyle face a fight to be fit after recent injury problems.

Callum Wright is definitely out and Liam Sercombe (pictured) is unlikely to feature due to a small niggle. 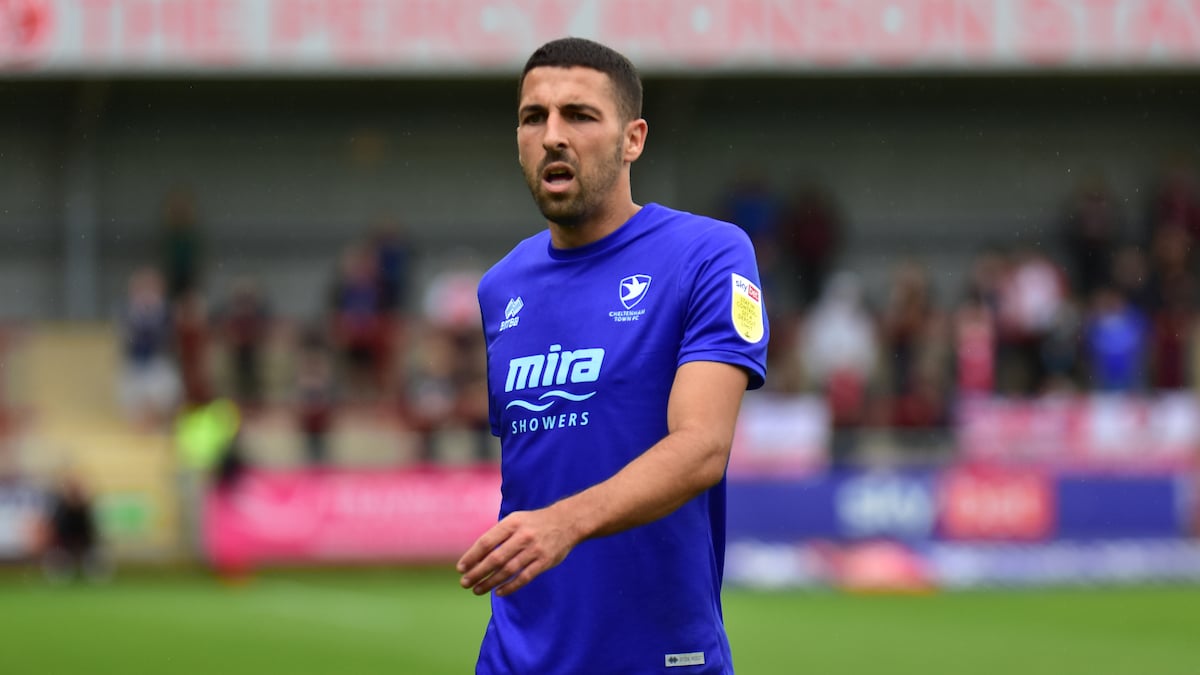 Michael Duff believes the international break has given his team a good chance to rest as they head into another busy run of League One fixtures.

"It has been a good time to reset. We've got a busy run of games now, more home than away, its a good opportunity to pick up some points," he said on iFollow.

Forward Kyle Vassell has also been previewing the clash on iFollow as he gears himself up to play a bigger role after building up his match fitness.

Looking to build on a pleasing start to the month in League One which saw them record a 2-1 home win over Ipswich Town, Accrington visit Gloucestershire on Saturday positioned 11th in the division.

It's their fourth consecutive season in the third tier and 16th season overall in the Football League.

Though one of the smaller clubs in the division, they've sustained themselves brilliantly at this level, gaining huge accolades for their on field performance and player recruitment.

Wide man Sean McConville is another, like Conneely, who has been a huge part of their rise in recent years having been at the club since 2015 in what's his second spell with them, while the likes of Yeboah Amankwah and Jovan Malcolm are useful loanees from Manchester City and West Bromwich Albion.

With 20 years of managerial service at Accrington, John Coleman is unsurprisingly seen as a legend at Saturday's opponents.

The 58-year-old, who played non-league football in his playing days as a striker in the north west, has managed the club twice - guiding them to the Football League originally in 2006.

He started his managerial career at Ashton United and has also had stints in the dugout at Rochdale, Southport and Irish side Sligo Rovers. 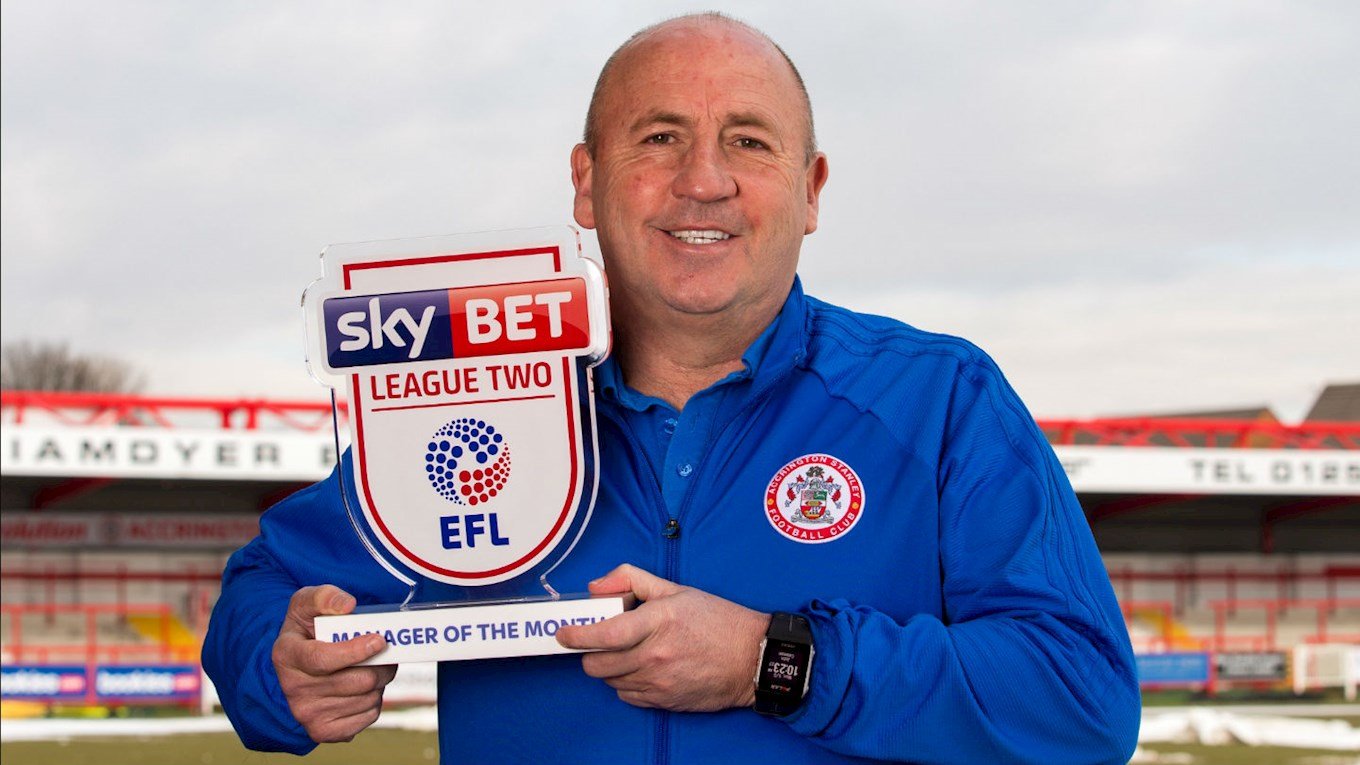 Buy tickets before midnight on Friday and save £2 on matchday prices. You can buy online or from the ticket office.

For Saturday's game it's £1 for under-18s when buying before midnight on Friday. Use the voucher code QUIDKID online to take advantage of this brilliant offer in all areas of the stadium.

If choosing to buy on the day, buy for the Colin Farmer Stand from next to the Parklands turnstiles, or for the Autovillage Stand from the ticket office. All standing tickets are available to buy from the portakabin in the car park.

You can buy tickets all day in the lead up to kick-off from the ticket office, while they go offline on the internet at midday.

The big interview in Saturday's match programme is with on loan defender Mattie Pollock who discusses his time at the club so far, his experiences since joining his parent club Watford, his father Jamie's former top flight career and more.

There's also an interview with Kyle Vassell, the thoughts of Michael Duff, chairman David Bloxham pens his regular notes plus loads of other great reads to enjoy alongside your matchday.

The programme is available to purchase around the stadium at a price of £3 and can also be bought online. 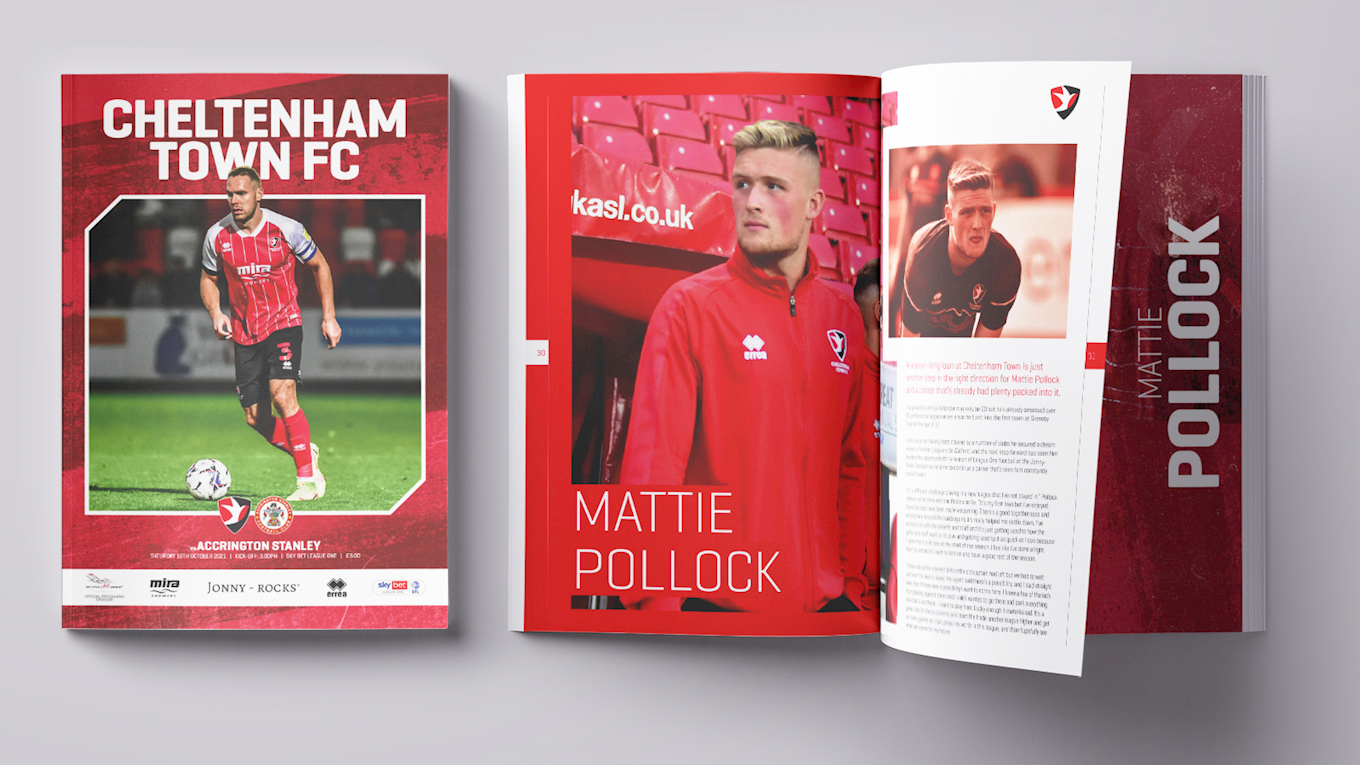 Kyle Vassell scored his first League goal for Cheltenham Town in a 1-0 victory over Accrington Stanley at the Jonny-Rocks Stadium.

Will Boyle’s shot from just inside the box was saved by Toby Savin but Vassell finished the rebound on 79 minutes.

Accrington, meanwhile, have registered just four league points on the road and remain 11th in League One.

Michael Duff said the international break gave his team a good chance to reset. They were also boosted by the return of captain Boyle from injury, while Dan Crowley made his League debut for the Robins.

Stanley and Cheltenham had conceded more goals than any other club in League One before kick-off (20) but both did their utmost to keep each other at bay in the first half.

Vassell was presented with a prime opportunity inside the opening five minutes following some industrious work by Alfie May down the left. The Cheltenham forward sprinted away from his marker and squared to an unmarked Vassell, who after initially fluffing his lines, drew a comfortable save from Savin. 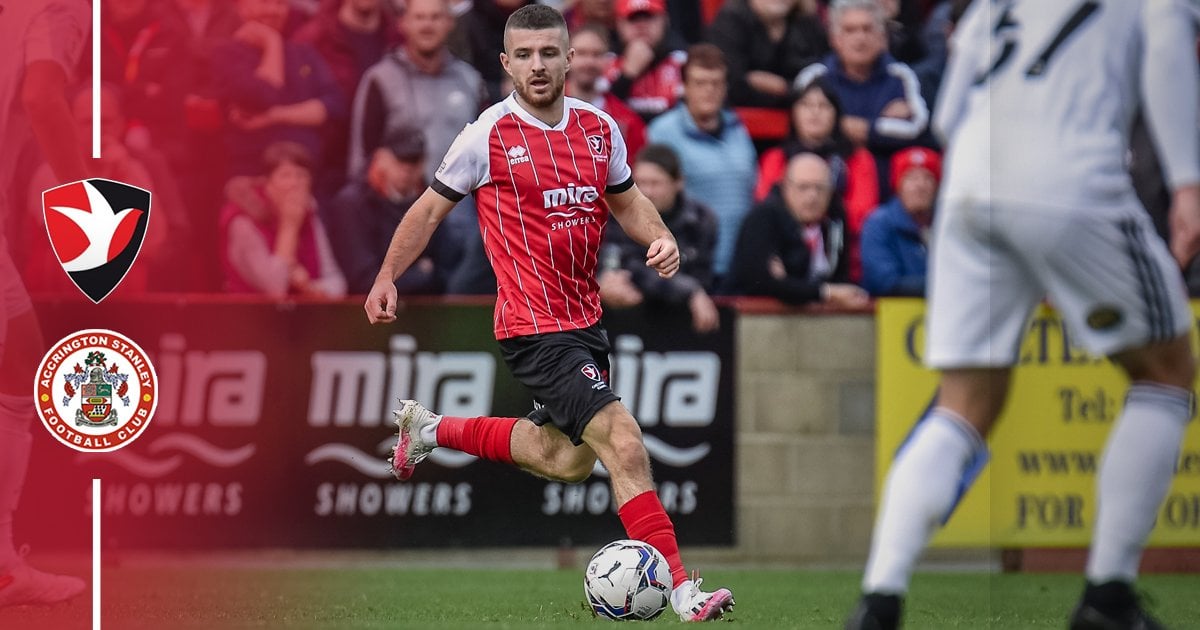 Crowley entertained the home crowd with a confident and energetic performance. He helped Cheltenham tick in the centre of midfield and posed the biggest threat to Stanley’s aerially supreme centre-backs with his teasing crosses.

His corner from the right set-up Cheltenham’s next chance when Mattie Pollock’s downward header was clawed away by Savin before Boyle’s hooked cross was to no avail.

Boyle had perhaps the best chance of the first half. Crowley, buzzing around the pitch incessantly, breezed past a series of passes before rolling a low ball out to Sean Long. He picked an inviting cross for Boyle but the Robins defender’s header was wayward and sailed over the crossbar.

Stanley, who rarely threatened in the final third, nearly caught Cheltenham cold against the run of play on the cusp of half-time. Conor Thomas’ interception inadvertently found former Robins midfielder Harry Pell. Scott Flinders did very well to narrow the angle and sprawled into a low save.

Taylor Perry had to be withdrawn due to an injury and his replacement Ellis Chapman made a good impression at the beginning of the second half. A lung-busting run down the left was followed by a low cross to Vassell but his low strike deflected wide. 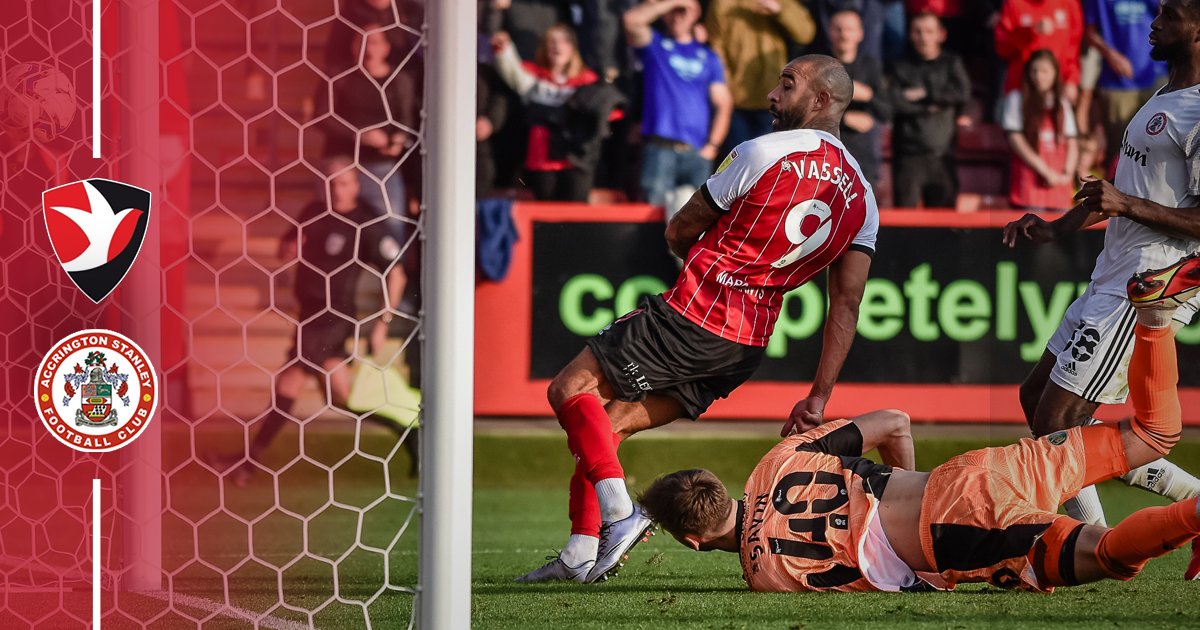 Cheltenham faded slightly and allowed Stanley into the game. They very nearly punished them when Pell was denied by a spectacular save from Flinders. Sean McConville tiptoed his way past Chris Hussey and Pell met David Morgan’s cross with a thunderous header but Flinders proved impenetrable.

Boyle needed treatment during the final 25 minutes but battled onto play a key role in the winning goal. Vassell declared this match as the point where his “season starts” and marked it with his first league goal for the Robins on 79 minutes. Boyle weaved his way into the penalty area and unleashed a dangerous shot which Savin parried straight to Vassell to convert.

Cheltenham had two late chances to add a second with Kyle Joseph and Matty Blair coming close. Joseph poked his finish wide of the far post and turned provider for Blair whose hesitant finish deflected wide.

Once again under-18s can enjoy watching Cheltenham Town for just £1 on Tuesday night when buying tickets for the upcoming game with Morecambe online before midnight on Monday.

The Kids for a Quid offer was a huge success for Saturday's 1-0 home win over Accrington Stanley.

Under-18s are again being encouraged to come along to the Jonny-Rocks Stadium for Tuesday's clash with Morecambe, which gets underway at 7.45pm on the night.

To take advantage of this brilliant offer buy online and use the code QUIDKID when purchasing to get your £1 under-18s ticket.

The offer is available for under-18s online until 1.45pm on Tuesday afternoon.

The match is another important League One fixture for Michael Duff's side during a busy run of home games in October with an upcoming Papa John's Trophy tie with Chelsea under-21s also offering youngsters the opportunity to support the team for just £1. 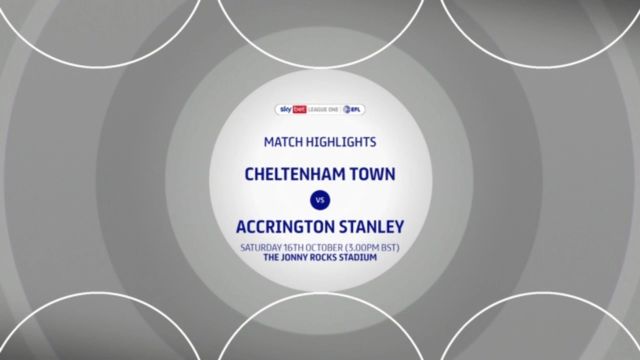 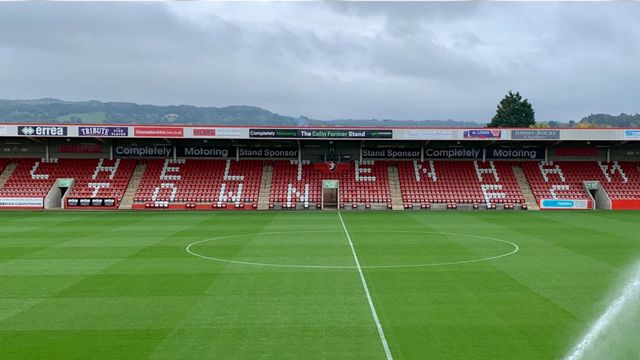