Cotterill's achievements in his time as manager of Cheltenham have set the platform for the Robins' historic Football League success over the last two decades.

But on Saturday any memories of what's gone on before for 90 minutes at least will be put to one side as the focus is on the here and now and another crucial three points that are up for grabs.

Unbeaten in five games, Michael Duff's men are in good shape, and Duff lines up for the first time as a manager against the boss who gave him his big break in the game.

Tickets are available to buy online. Buy before midnight on Friday to save £2 on matchday prices.

Ellis Chapman (pictured) will face a late fitness test to see if he is available after suffering a muscle injury at the start of the week.

Callum Wright, Taylor Perry, Will Boyle and Charlie Raglan remain out due to injury. 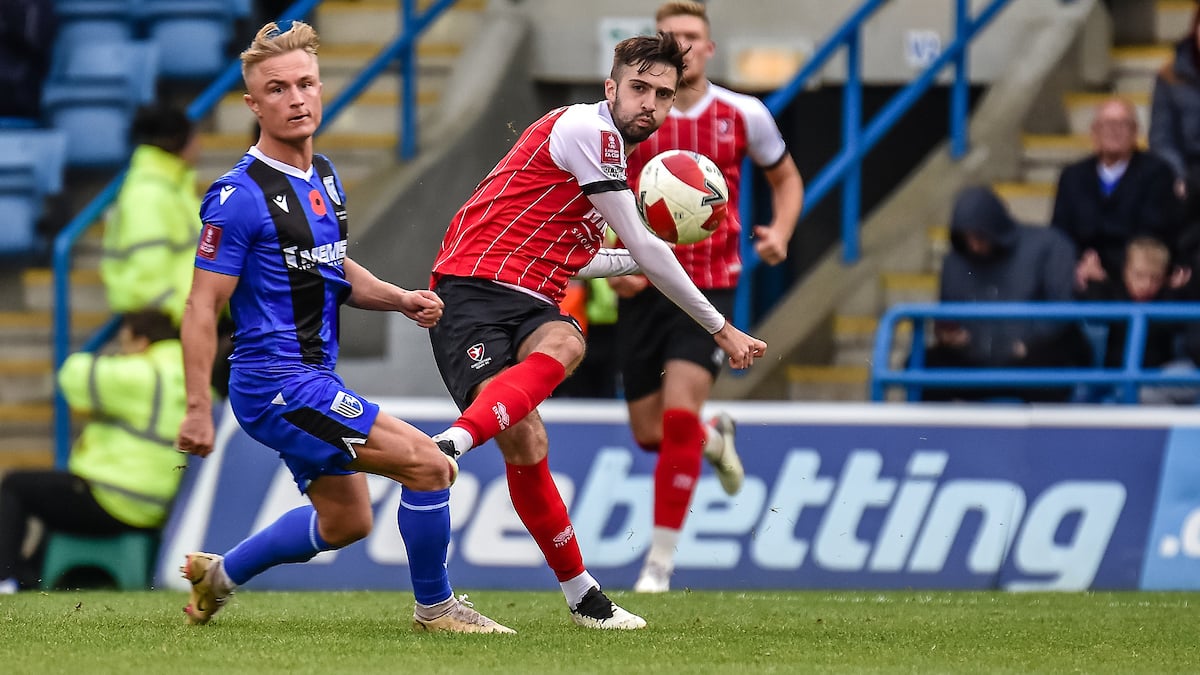 Michael Duff insists his relationship with Steve Cotterill will be put to one side on Saturday as he does everything he can to lead his team to victory.

After a slow opening to the campaign, Shrewsbury Town are beginning to pull together the results they need to kick start their season.

As well as a recent televised thrashing of non-league Stratford Town in the FA Cup, the New Meadow side have registered a draw against last season's play-off finalists Lincoln City, and recorded league wins over Cambridge United and MK Dons of late.

They carry experience in their squad with the likes of Shaun Whalley, who has been a Shrews player since 2015, Grenada international Aaron Pierre and ex-Wolves defender Ethan Ebanks-Landell.

Front man Sam Cosgrove is on loan from Birmingham City, while Ryan Bowman has made the step up from League Two after joining in the summer from Exeter City.

One-time Rugby Town product Luke Leahy will have to be watched. He signed in the summer from Bristol Rovers and has an eye for goal despite his traditional position in a deeper role.

Steve Cotterill is a man who needs no introduction to Cheltenham Town supporters. Much of the football club's legacy for the past 25 years has been built on the incredible success he had as a manager at his hometown club.

He was the man who guided the Robins from the Southern League all the way to the third tier of English football for the first time in the club's history, with a 1998 FA Trophy Wembley win to add to a stunning series of years along the way.

As a player he started his career with the club, coming up through the ranks from the youth and reserve sides, and going onto play professionally with the likes of Burton Albion, Wimbledon, Brighton & Hove Albion and AFC Wimbledon.

His management career began in Ireland with Sligo Rovers before he moved back to Cheltenham and took charge in 1997 with many successful years to follow.

Seen as one of the brightest English managerial up and coming talents, he later moved to Stoke City before going onto manage at Burnley, Notts County, Portsmouth, Nottingham Forest, Bristol City, Birmingham City, and since November 2020, Shrewsbury. 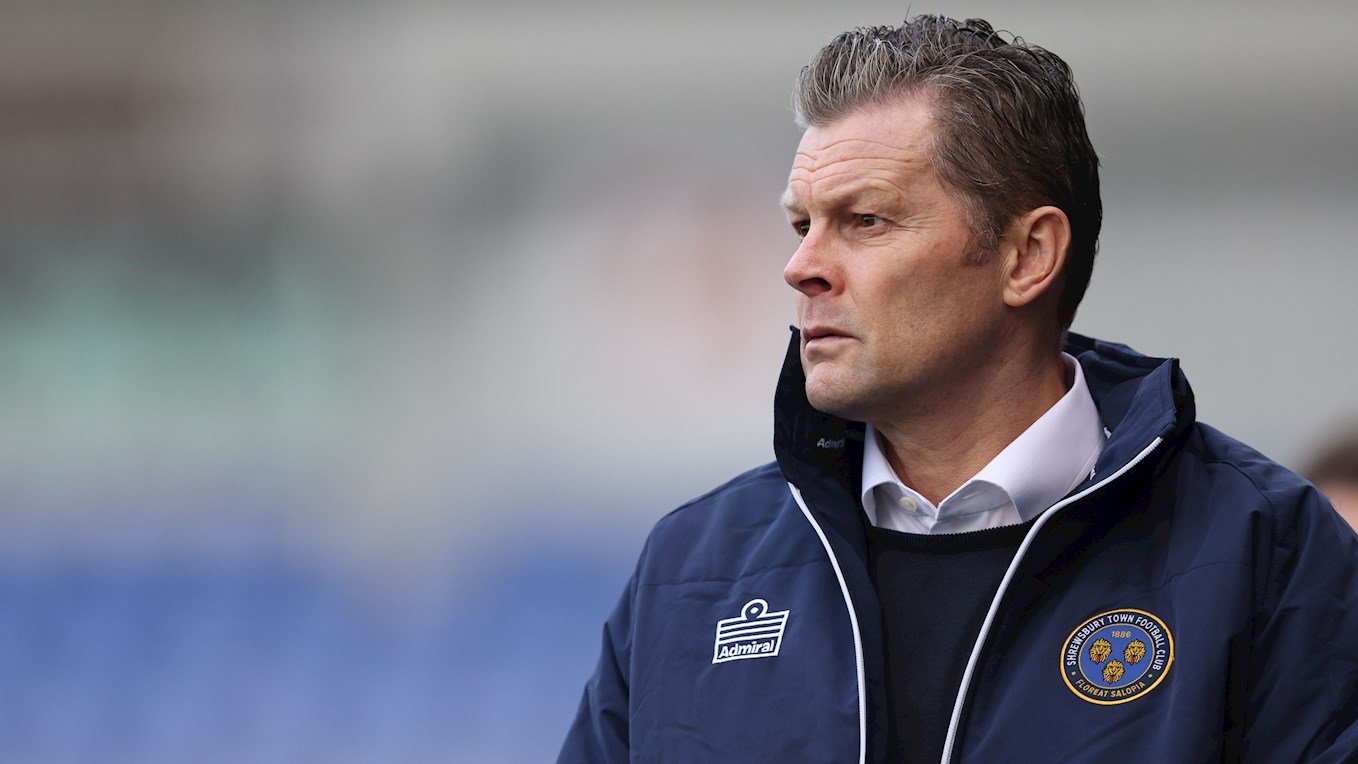 If you are buying on matchday then Colin Farmer Stand tickets are available from near to the Parklands turnstiles. Autovillage Stand tickets can be bought from the ticket office, while tickets for all standing areas will be on sale from the portakabin in the car park.

Whether you're buying or picking up pre-paid tickets, it's recommended you leave plenty of time before kick-off to avoid any queues.

Tickets are available to buy online. Make sure you buy before midnight on Friday to save £2 on matchday prices.

Front man Kyle Vassell is the big interview in Saturday's programme as he reflects on his journey from non-league football in the south-east to life in the Football League and as a Northern Ireland international.

There is also an interview with Mattie Pollock reflecting on his match winner on Tuesday in the FA Cup.

As well as that David Bloxham pens his notes from the boardroom, there's a look at the opposition, Michael Duff drafts his pre-game thoughts plus there's much more included.

The programme will be on sale around the stadium and in the club shop and is priced at £3. It's also available to buy online.

Cheltenham Town continued their unbeaten run after coming back to beat ten man Shrewsbury Town 2-1 with goals from Conor Thomas and Kyle Joseph.

The Robins conceded inside five minutes after Daniel Udoh put the visitors in front following a lively start to the game.

However, the Shrews went down to ten men after Elliot Bennett stopped Dan Crowley’s goal bound effort with his hands. Spot kick taker Thomas comfortably dispatched the effort and got the home side level.

The constant pressure by Cheltenham overwhelmed Shrewsbury, and substitute Joseph scored the winner, shortly after coming on in the second half, and confirmed the deserved three points for Michael Duff’s team.

In the opening minute, Pennington tripped and stopped the ball with his hands to prevent Chris Hussey from running through on goal. Kyle Vassell fired the resulting free kick over the crossbar, much to the delight of Pennington, and the game stayed goalless.

Udoh darted past Lewis Freestone creating some space and scored, putting the away side up inside five minutes. 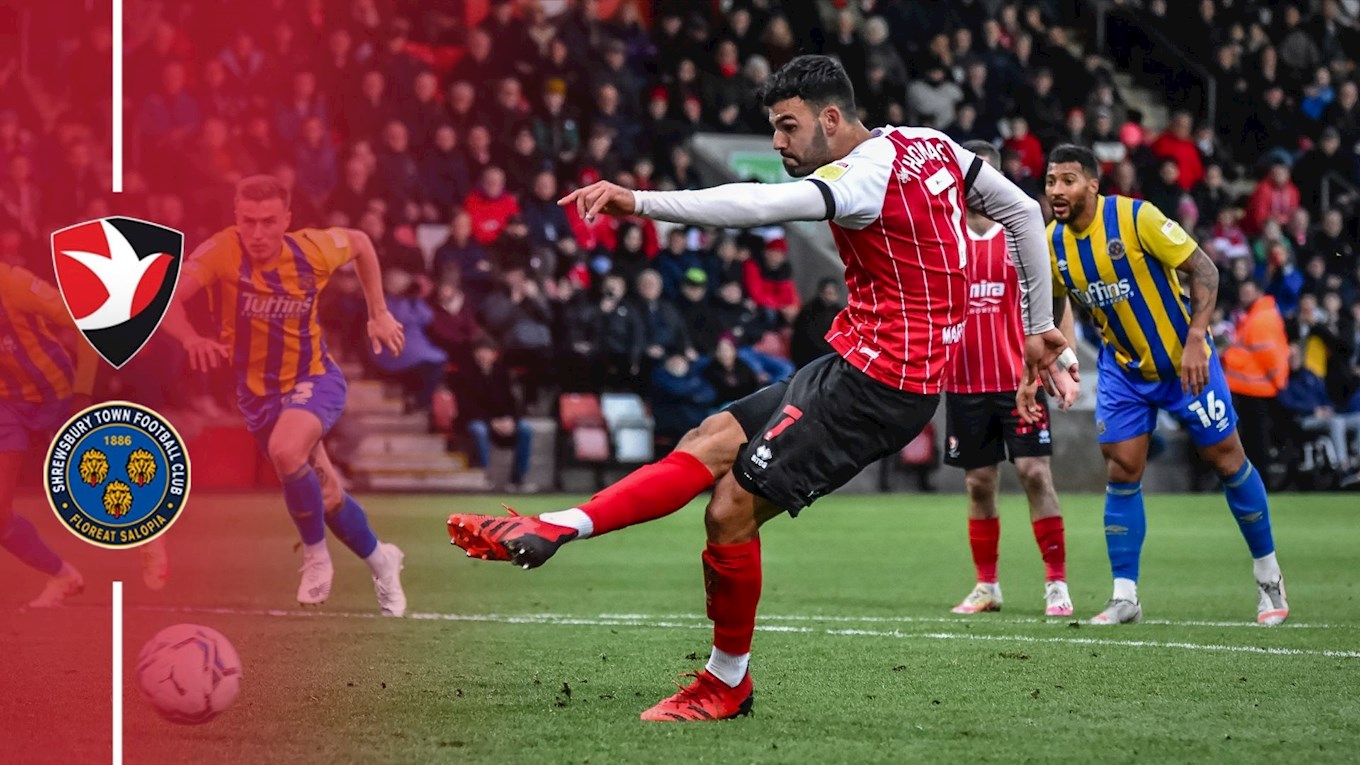 The Shrews pressed the home side well winning possession from a Sean Long misplaced pass, and the counter-attack ended with the striker scoring his third of the season.

The lively start continued with Liam Sercombe breaking from a Shrewsbury corner and caused Robins fans to stand off their seats with a teasing through ball looking to put Christian Norton through on goal, however away keeper Marko Marosi came off his line quickly to clear the ball.

Shrewsbury continued their fast start, with four corners inside 15 minutes of the opening half.

Cheltenham pulled a few passes together and a cross in the Shrews box fell to Crowley. The midfielder turned his man and shot, with his effort seemingly bound for the net, all be it a save from wing back Bennett, who was sent off for handball.

Regular penalty taker Thomas scored from 12-yards into the bottom left-hand corner, to bring the home side back on level terms.

With the extra man, the Robins pushed on in pursuit of another goal. Their next effort came from Matty Blair, whose powerful shot forced Marosi into making a smart save.

Blair tested the 'keeper once again before the final whistle, as the wing back got on the end of a Sercombe cross, but the 'keeper made another stop.

Crowley impressed again with the first big chance of the second half. With Shrewsbury sat back, the midfielder dribbled into the box, and managed to turn one defender and sit another down, but his toe poked finish was blocked. 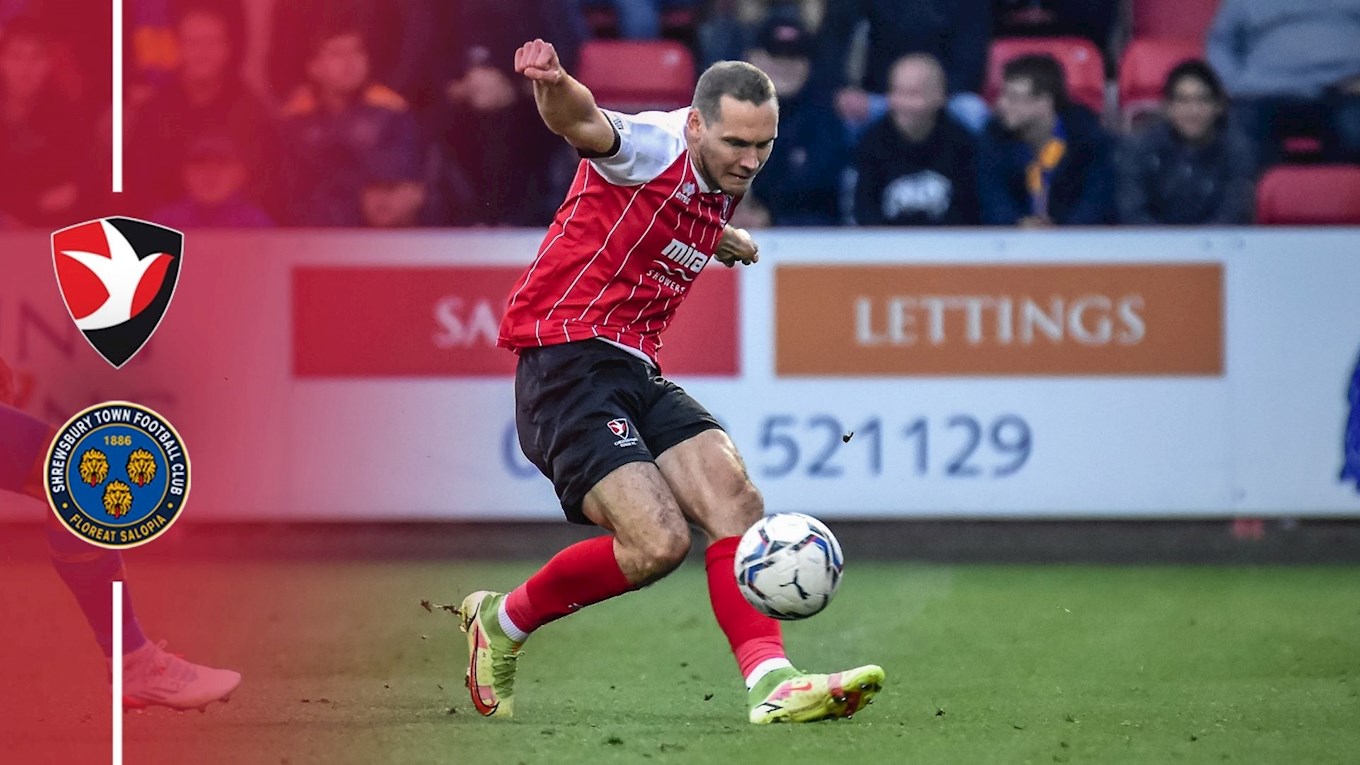 The visitors continued to invite pressure, as Long found Vassell who leaped highest in the Shrewsbury box, however the connection was poor and Marosi saved comfortably.

The Robins countered from a Shrewsbury corner, with substitute Joseph leading the charge. He passed to Vassell but the striker was off balanced when he let the ball fly, and should’ve tested the visiting keeper.

Cheltenham finally took the lead for the first time in the match. Blair played a neat pass to Crowley who shot inside the six-yard box, although despite his scuffed effort hitting the post, substitute Joseph tapped in the rebound.

Joseph then had another effort to double his goal count, but the young forward sliced at the ball, and it went well wide.

The Robins continued waves of attacks for the rest of the second half, with man of the match Crowley dominating the game, but Joseph's winner proved to be decisive in securing three points.

Buy in advance for Cheltenham Town's home match with Shrewsbury Town on Saturday and get behind the lads for another key League One fixture at the Jonny-Rocks Stadium.

Following Tuesday night's FA Cup first round replay success over Gillingham the Robins return to home action on Saturday when Shrewsbury are the visitors.

The Shropshire side are managed by former Cheltenham great Steve Cotterill as he gets set to go head-to-head with one of his former players in the opposition dugout in the form of now Robins boss Michael Duff.

On the pitch for both teams it's another important game in the division this season and you can be a part of it by buying tickets to be part of the crowd.

You can buy in advance online or from the ticket office for the weekend.

Make sure you buy before midnight on Friday to take advantage of the best ticket prices on offer ahead of matchday. 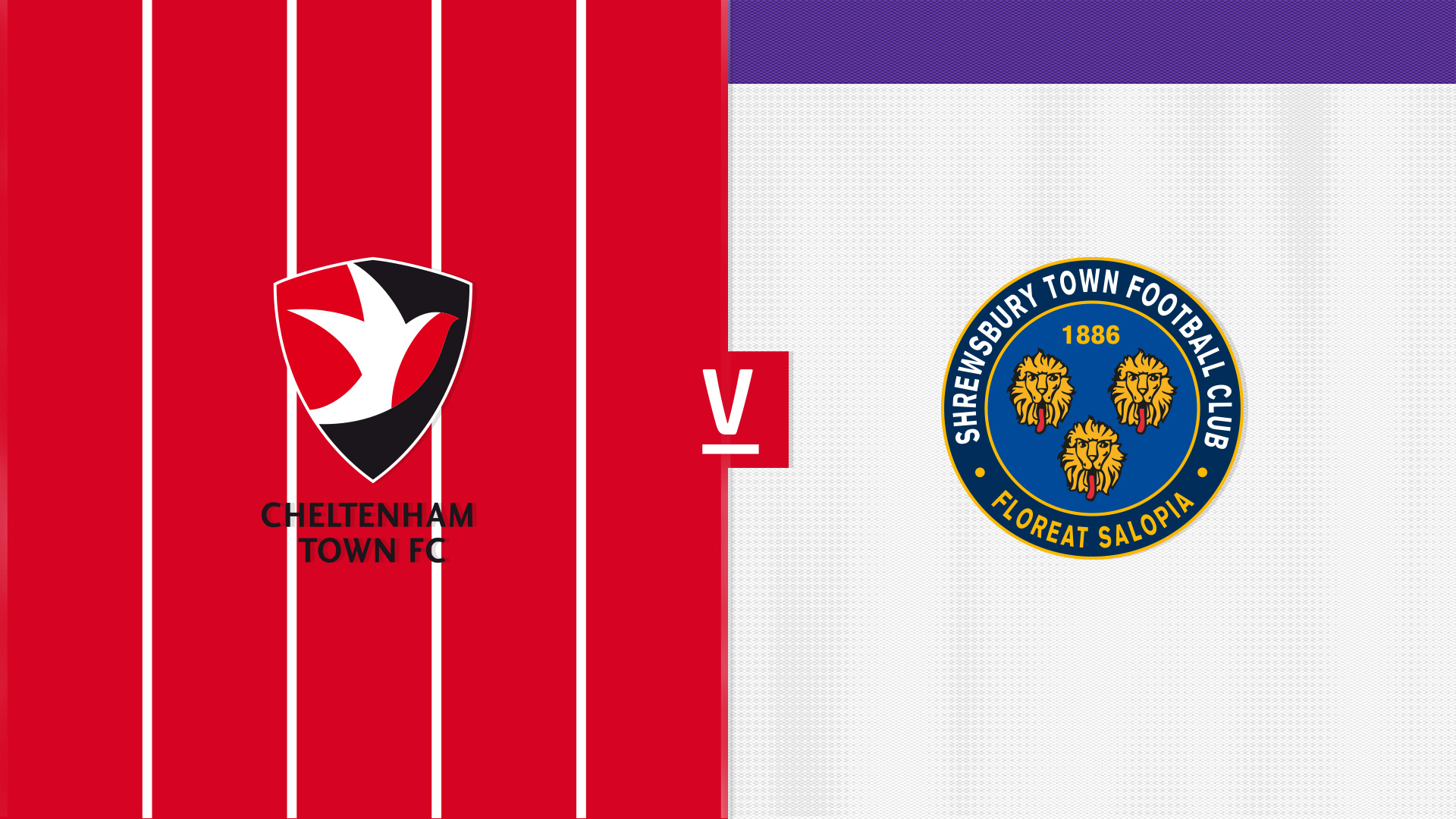 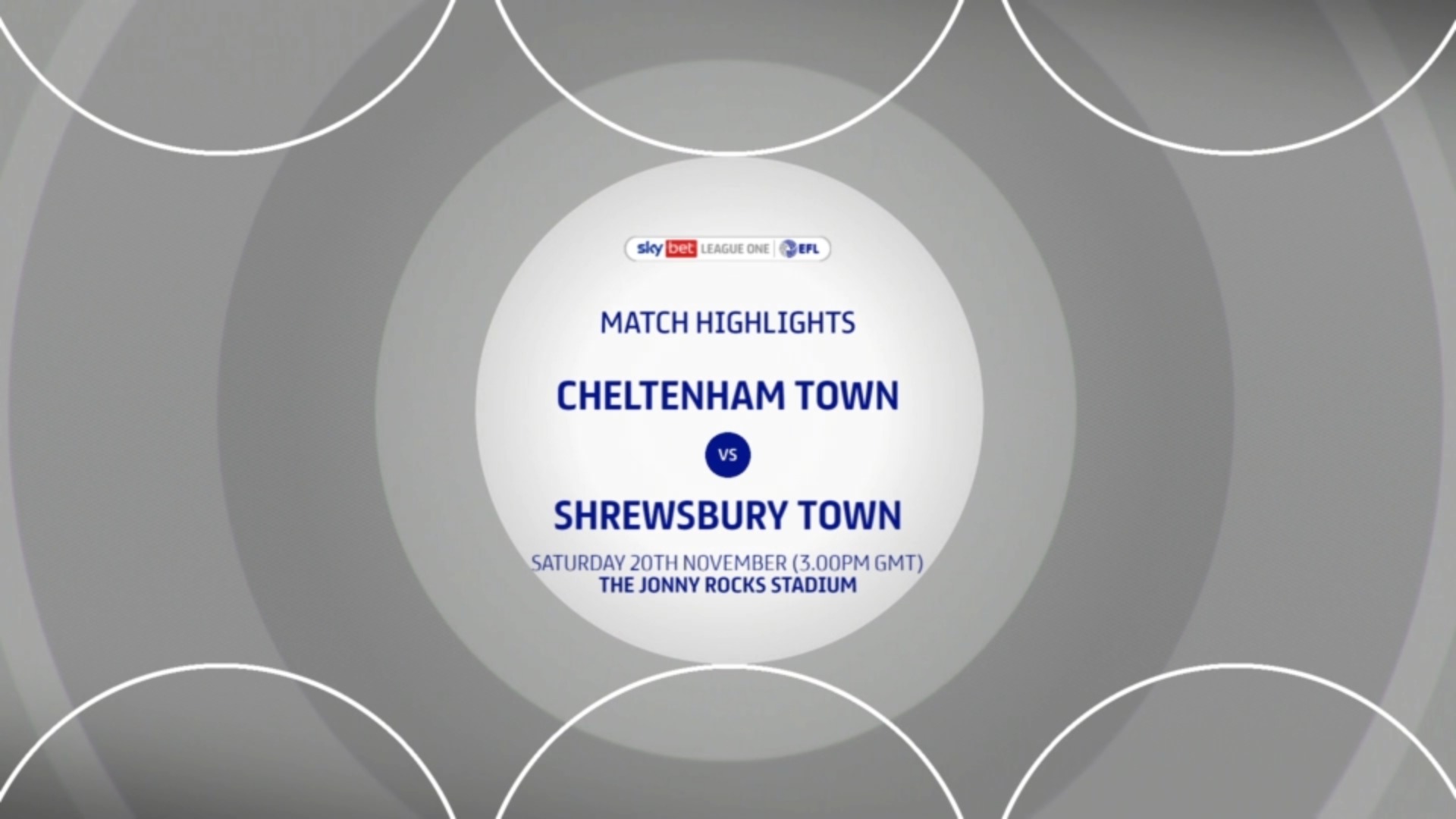