It's a visit to AFC Wimbledon's brand new Cherry Red Records Stadium at Plough Lane for Cheltenham Town in the FA Cup second round on Saturday (kick-off: 3pm).

The Robins will be aiming to make it a first successful visit to Wimbledon's impressive new home by booking a place in the third round of the competition.

The third round is the stage when Premier League and Championship sides enter, so League One foes Cheltenham and Wimbledon will be going head-to-head knowing what is potentially at stake for the successful side.

It is the first of three contests between the two clubs this season and there's a huge amount to play for in a competition that proved to be very special to the Robins last season.

Defender Charlie Raglan (pictured) is expected to be back involved in the squad. The 28-year-old hasn't featured due to injury since the end of September.

Elsewhere in the squad though Lewis Freestone, Conor Thomas, Will Boyle, Matty Blair and Taylor Perry are expected to be all out with injury problems. 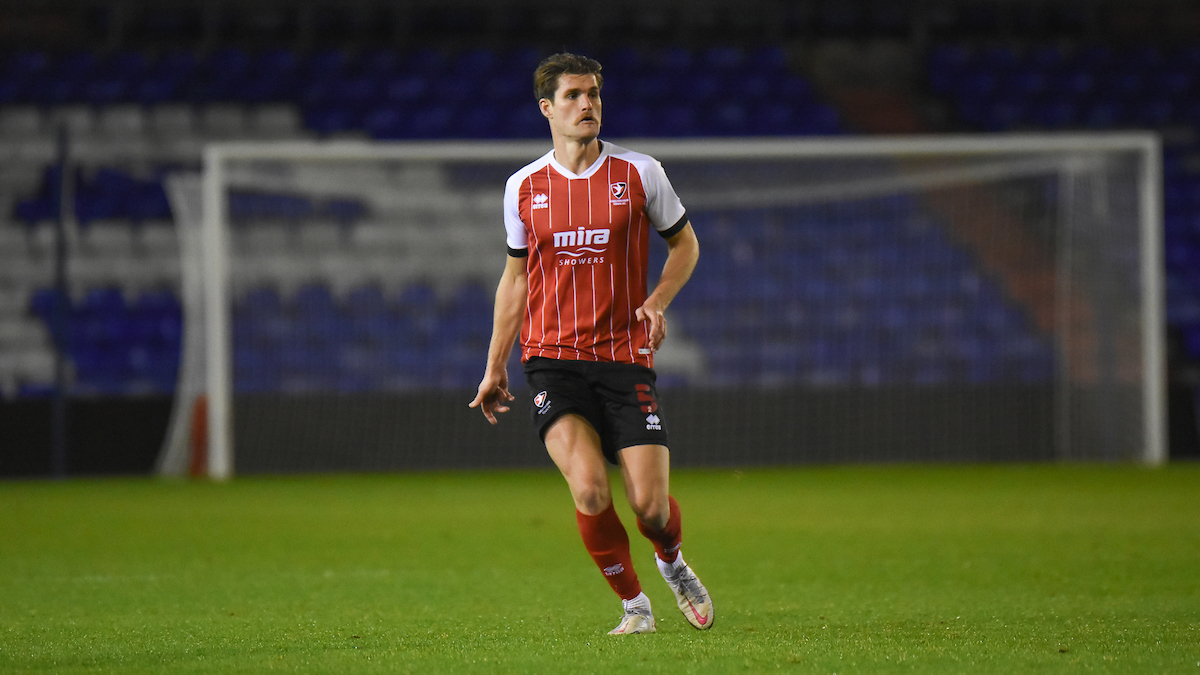 AFC Wimbledon's threat from set pieces is something to watch out for in the eyes of boss Michael Duff.

He told the media: "We've had tough away draws in all cups so we've got one more to get through and then there's the possibility. We are away to another League One team which is as difficult as it gets.

"They're a threat. It shows you their togetherness that they keep coming back.

"They've got a definite way of playing. A definite 4-2-3-1 in pretty much every game they've played."

Watch his full press conference by watching on iFollow where you can also see Chris Hussey previewing the game against his former club.

One of the club's in the English football pyramid best known for developing their own talent, AFC Wimbledon boast a number of young players in their ranks who have seen them up to 17th in League One this term.

When it comes to the FA Cup they reached this stage with a 1-0 win against National League North opponents in the shape of Guiseley.

Their young side is balanced out with useful experience brought by the likes of 28-year-old defender Ben Heneghan, skipper Alex Woodyard - a former teammate of Robins captain Sean Long from their time together at Braintree Town and Lincoln City, and strongly built centre forward Ollie Palmer.

Ex-Chelsea youngster Luke McCormick adds good quality to a team where many have progressed through the youth ranks from Jack Rudoni, to Ayoub Assal and defender Paul Osew.

Since they were reformed in 2004, Wimbledon's best FA Cup performance came during the 2018/19 campaign when they reached the fifth round. Historically the original Wimbledon club won the competition in 1988 thanks to Lawrie Sanchez's goal in the final against Liverpool. That day they were managed by Bobby Gould who 15 years later would manage the Robins.

Less than a month after taking temporary charge in February 2021, Mark Robinson was made permanent manager at AFC Wimbledon - a club he had first joined in its youth department in 2004.

It's his first managerial role having worked predominantly in development and youth football.

He is assisted by another coach who has worked their way up through the Wimbledon academy in the shape of Rob Tuvey. 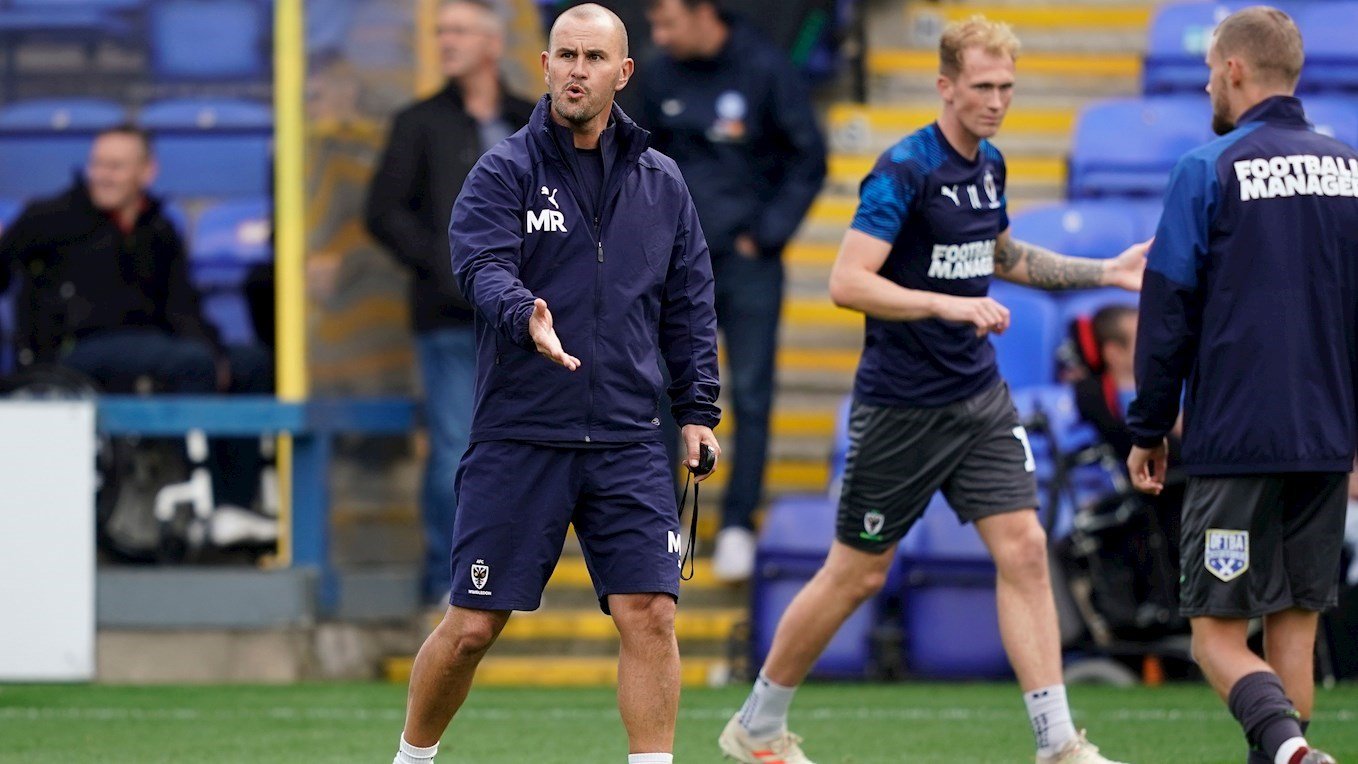 For fans who have bought from the Cheltenham ticket office but not collected their tickets, you can collect these from the away turnstiles on the day.

If you are booked on the Travel Club coach it will be leaving from the Jonny-Rocks Stadium at 10.30am.

AFC Wimbledon have advised driving to the stadium as there is no parking available. The nearest stations are Wimbledon Park (District Line), Haydons Road (Thameslink and Southern from Blackfriars or London Bridge) and Tooting Broadway (Northern Line).

Social media: Stay up to date with events at the Cherry Red Records Stadium by following @CTFCofficial on Twitter. You can also cast an eye on the latest score and team news on Facebook and Instagram.

Website: Read the match report after the game on the club website where you'll also be able to watch the post-match press conference.

Radio: Listen to match commentary on iFollow with an audio match pass. It's on sale for £2.50 and you can subscribe online.

Highlights: Watch the action from the game on Sunday at 7pm with the highlights show on BBC Four.

Cheltenham Town were edged out of this absorbing FA Cup second round meeting by the odd goal in seven at the Cherry Red Records Stadium.

It was enthralling stuff, a thoroughly entertaining cup occasion in south London but in the end, Michael Duff's side paid the price for a below-par performance in south London.

The 1988 cup winners led at the interval despite Alfie May's opener in the opening exchanges, scoring two goals of their own as half-time approached.

And the contest looked well and truly beyond reach after the hosts had stretched their advantage to three goals in the opening 20 minutes of the second period.

However late goals by Andy Williams and Ben Heneghan, an own goal, teed up an unlikely nail-biting finish.

AFC Wimbledon did have to ride their luck in the dramatic closing stages but all the damage had been done before the late rally which yielded the late chances to earn a replay.

The story of the Dons' return to Plough Lane is the stuff of football folklore and it was the Robins' first visit to this impressive new ground, backed by nearly 500 noisy travelling fans.

In the end a year that started with a famous evening against Manchester City ended with another memorable cup encounter, on this occasion frustrating Duff. 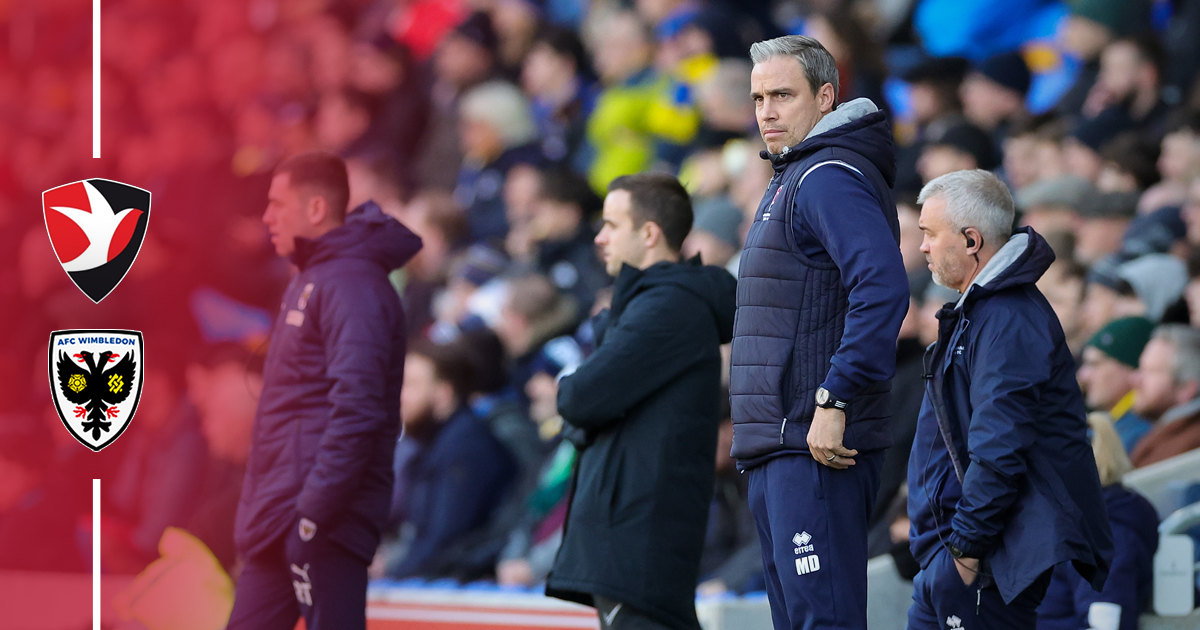 "I don't think we were very good today," he said afterwards.

"We could have got away with a result but they should have been out of sight. We can't let the last 10 mi nutes disguise the first 80. It was nowhere near good enough. Ulitmately we deserved to go out the cup.

"I can go in there and throw teacups and boot tables over but I'll know how disappointed they are on Tuesday night [against Cambridge United in League One]. We got what we deserved."

Duff made one change, restoring Callum Wright to his starting line-up with Kyle Vassell missing out through injury. Matty Blair returned after a two-game absence and replaced Dan Crowley at the interval. He joined Charlie Raglan on the bench.

May stretched his season's tally to nine with his second minute strike, racing onto Kyle Joseph's ball and cutting inside his marker before finding the inside of the right post with a fine finish.

The home side responded well and enjoyed the lion's share of possession after the goal, forcing Scott Flinders into a vital fingertip save to deny Anthony Hartigan from 25 yards.

It opened up for Liam Sercombe with half-hour played but the midfielder blasted his 18-yards effort into the travelling faithful. At the other end Flinders saved his side with a smart double stop.

However two goals in the final nine minutes of the first half put the home side in control at the break.

First Ayoub Assal raced onto a threaded ball and beat Flinders from 18 yards. Then Luke McCormick crashed a shot against the angle of the woodwork and it fell kindly for Ollie Palmer, who did the rest from close range. 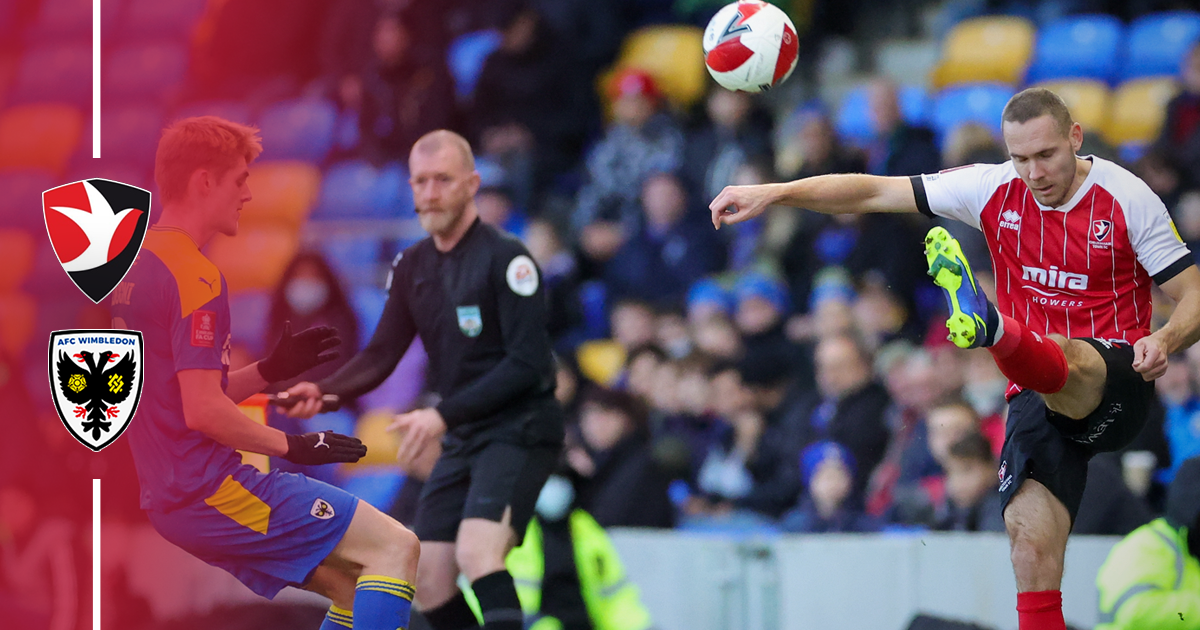 Duff's side were indebted to a smart save by Flinders moments after the restart, parrying Assal's glancing header to safety.

But Assal doubled his account with 55 minutes on the clock, this beating the Cheltenham number one with a similar effort to extend the lead.

Next Palmer added his second, taking advantage of some sloppy defensive play to curl a lovely effort into the top right-hand corner of Flinders' goal from the angle of the box.

That seemed to be that, and Duff made a triple change with 28 minutes remaining replacing Sean Long (with Raglan), Joseph (Williams) and May (Norton).

It was Williams that reduced arrears 12 minutes later before a calamitous moment in the Wimbledon defence saw Ben Heneghan score an mown goal, failing to deal with Flinders' long punt down field to set up a tense final 10 minutes.

There was plenty of late drama with Blair and Pollock going so close, both denied a late leveller by the Dons goalkeeper Nik Tzanev.

There was a final chance when Hussey sent in a corner from the right deep into injury time but Ellis Chapman shaved the upright with an effort at the back post. 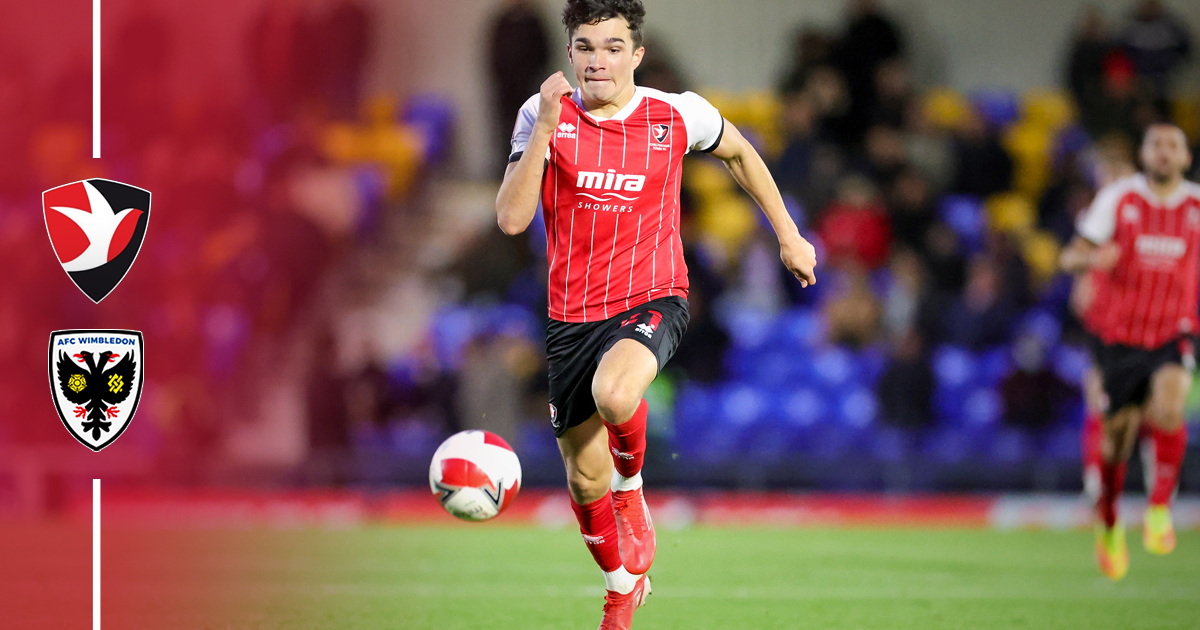 Tickets are now on sale for Cheltenham Town's FA Cup second round tie at AFC Wimbledon.

The match will be played at Wimbledon's new Cherry Red Records Stadium on Saturday 4 December with kick-off at 3pm.

After getting past Gillingham following a replay in the first round, the Robins will lock horns with League One opposition again, targeting a place in the third round when all Premier League and Championship sides enter the competition.

The Travel Club coach taking supporters to the game will leave from the Jonny-Rocks Stadium at 10.30am.

Tickets and travel are available to buy online and from the ticket office.

AFC Wimbledon have informed the club that checks will be in place on the day for anyone who has purchased an age related ticket who will be asked for proof when entering the stadium, with failure to provide proof resulting in a full adult ticket being charged.

Any tickets uncollected from the Jonny-Rocks Stadium will automatically be taken to Wimbledon for collection on the day.