April, the final month of the League One season, begins with a visit to Accrington Stanley on Saturday (kick-off: 3pm).

Cheltenham Town and the club's hosts from Lancashire are joint on points in the middle of the league table, and the game is a great opportuntiy to try and edge in front of John Coleman's side who have continued to show how hard to beat they are on home soil this term.

The shackles are very much off the Robins squad who are determined to record as high a finish as possible in what has been a successful first season back in League One.

Accrington provides a different type of test in what is a third consecutie away match after recent visits to Plymouth Argyle and Sheffield Wednesday, and Michael Duff's men will be hoping to return back from Lancashire with something to show for the long trip north.

A decision will need to be made on whether forward Kion Etete is fit enough to be involved after his late substitute appearance in last weekend's loss at Sheffield Wednesday.

Charlie Colkett (pictured) and Ben Williams are unavailable due to injury, while Charlie Brown is also likely to be unavailable. 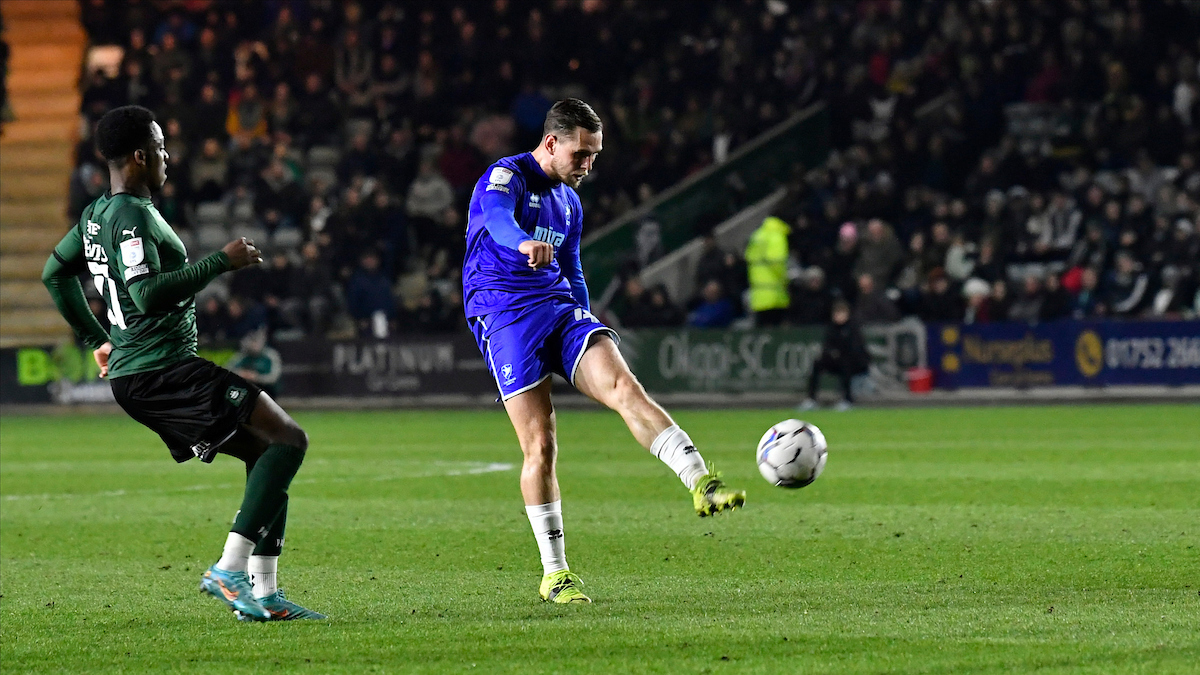 Michael Duff says he has admiration for how Accrington have modelled themselves as a club over the years to achieve success at competing at League One level.

"Every year they stay in this League is a success and they've sold a lot of players. They are a really hard team to play against," he said in Thursday's press conference.

"They go man-for-man a lot of the time all over the pitch. They play a back three but if you flip your midfield to a two and a one they'll change, if you play a one and a two they'll change.

"They are really good at home. They are probably mid-table because their away record is so poor."

Watch the full interview with Duff for free on iFollow where you can also see Liam Sercombe provide his thoughts ahead of Saturday's fixture.

It's three straight seasons for Accrington in League One and they look all but set to confirm a fourth consecutive campaign at this level as they occupy a mid-table position heading into the final weeks of the season.

The Lancashire side have proved a tough nut to crack once again this season with their home form impressing. Their last outing, a defeat to Gillingham, was their first home loss since the beginning of December.

Their squad continues to feature a number of young talents, interspersed with some long-term regulars and non-league pick ups who continue to provide the perfect blend at this level.

Wide player Sean McConville has over 300 League appearances across two spells for the club under his belt, while central defender Michael Nottingham and former Cheltenham midfielder Harry Pell are wise older heads in their ranks.

Some of the exciting young players in their set-up include Northern Irishman Liam Coyle and Congolese born Rosaire Longelo, while centre back Ross Sykes rose through their youth ranks to become a regular first team player.

Vastly experienced manager John Coleman has been in charge at Accrington since September 2014. It's his second stint in the role having led the club between 1999 and 2012 - a period where he guided them from the Northern Premier League First Divison to the Football League.

A forward in his playing days, he played non-league football at the likes of Southport, Morecambe and Kirkby Town before going into management firstly at Ashton United - the final club of his playing career.

He's also taken charge at Rochdale, Southport and League of Ireland side Sligo Rovers and his number two is long-term assistant Jimmy Bell. 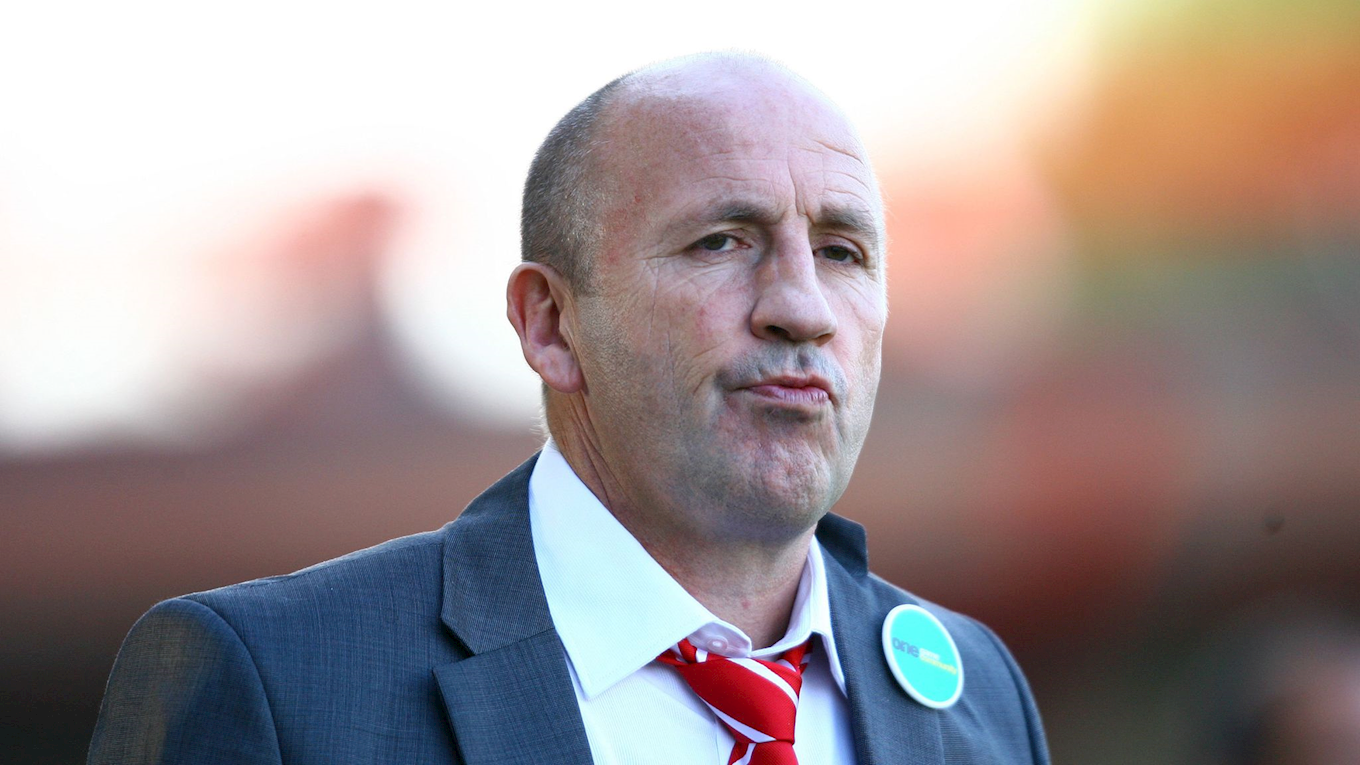 A late goal from Kyle Vassell proved to be the difference when the two teams met at the Jonny-Rocks Stadium earlier in the season.

The Northern Ireland international finished well when he reacted to a Toby Savin save from a Will Boyle effort that had been lofted towards goal in the second half.

Tickets are available to purchase on the day at Accrington at the following prices:

Robins fans will be located in the Studio Stand for the match and if you wish to transfer to the Coppice Terrace you can do this with a seated ticket.

Wheelchair users should contact Jo Ashton on 01254 356950 if they have any additional requirements beyond tickets.

There's no more away travel on sale with the Travel Club coach full for the match. It leaves from the car park at the Jonny-Rocks Stadium at 9.30am.

Website: After the match check out the match report on the club website. You can also watch the post-match press conferences.

Listen: Tune in to full match commentary by buying an audio match pass on iFollow for £2.50.

Highlights: On iFollow you'll be able to view extended highlights with shorter highlights available on YouTube, Sky Sports and Quest.

Will Boyle scored a dramatic late equaliser to help Cheltenham Town gain a point in an entertaining eight goal clash at Accrington Stanley.

The defender was twice on the scoresheet as the Robins fought back in a great watch for the Wham Stadium crowd.

Alfie May was on target again to get the first of the eight, but by half time Accrington were ahead thanks to Tommy Leigh's first and Sean McConville's well-placed strike.

The hosts extended their lead immediately after half time when Leigh got his second, but Boyle headed in for his first midway through the second half to hand Michael Duff's side a lifeline.

It looked as though the hosts would wrap up the win when Ellis Chapman scored an own goal on 87 minutes, only for Callum Wright to pull one back a minute later.

Ross Sykes was then sent off for the home side, but the drama didn't stop there, as Boyle popped up in the box and brilliantly levelled the game at the death.

Despite the eight goals, opportunities were limited for both teams in the opening exchanges. A quality forward pass from Elliot Bonds created the first notable opening - sending George Lloyd through down the side of the Accrington centre backs and the young striker was denied by a Toby Savin save. 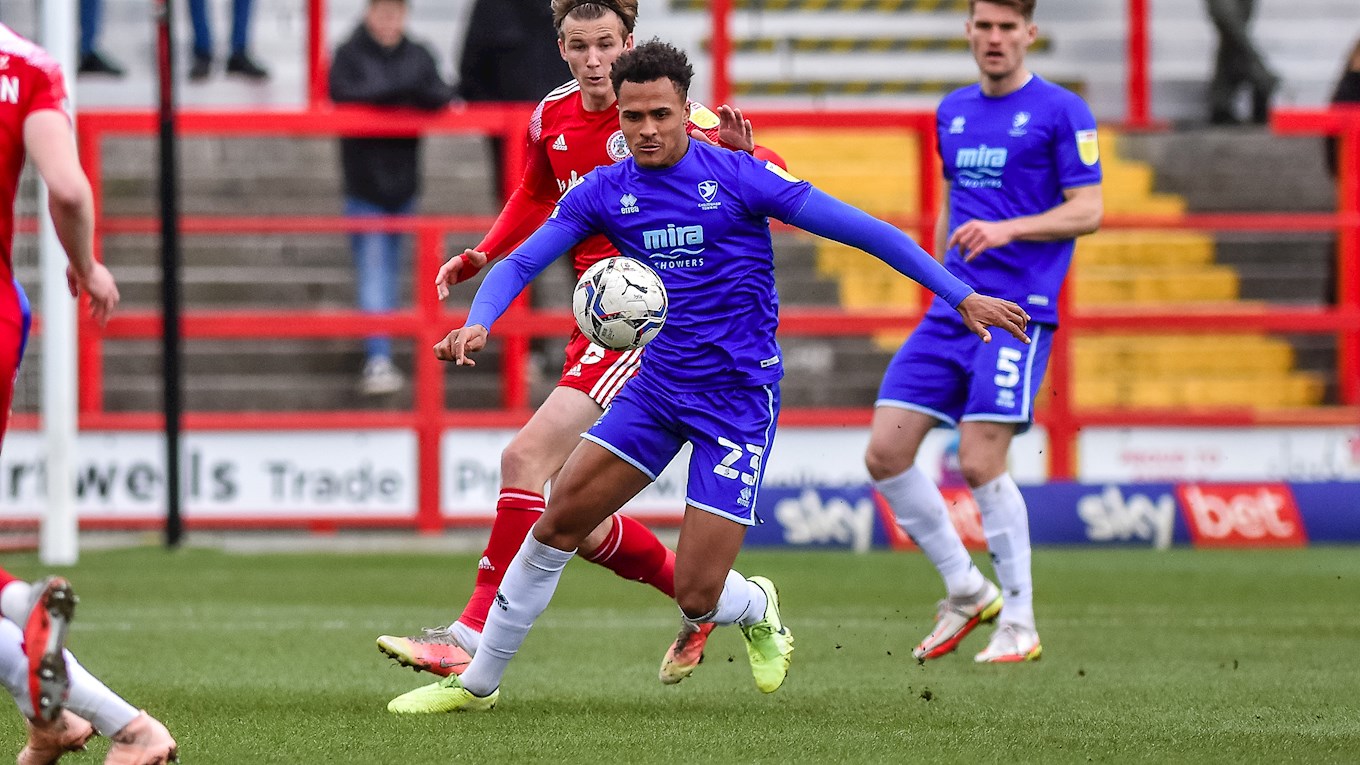 Ethan Hamilton's long-range hit was deflected behind as Accrington headed towards goal, but it was Cheltenham who struck the first blow.

A ball forward was poorly dealt with at the back and May confidently lobbed Savin with a classy first time finish.

It looked as though Michael Duff's side would go into the break ahead, but within the first minute of stoppage time the scores were level when Leigh drew the hosts level.

And then in the fifth of six minutes of stoppage time it was 2-1 as long-serving McConville blasted in when the ball broke to him on the right-hand side.

The half time break did little to stop Accrington's attacking momentum and on 48 minutes Leigh got his second and their third.

A fifth goal of the afternoon enabled Cheltenham to get back into the contest. Half time substitute Liam Sercombe's free kick from the left reached Boyle at the back post who headed in. 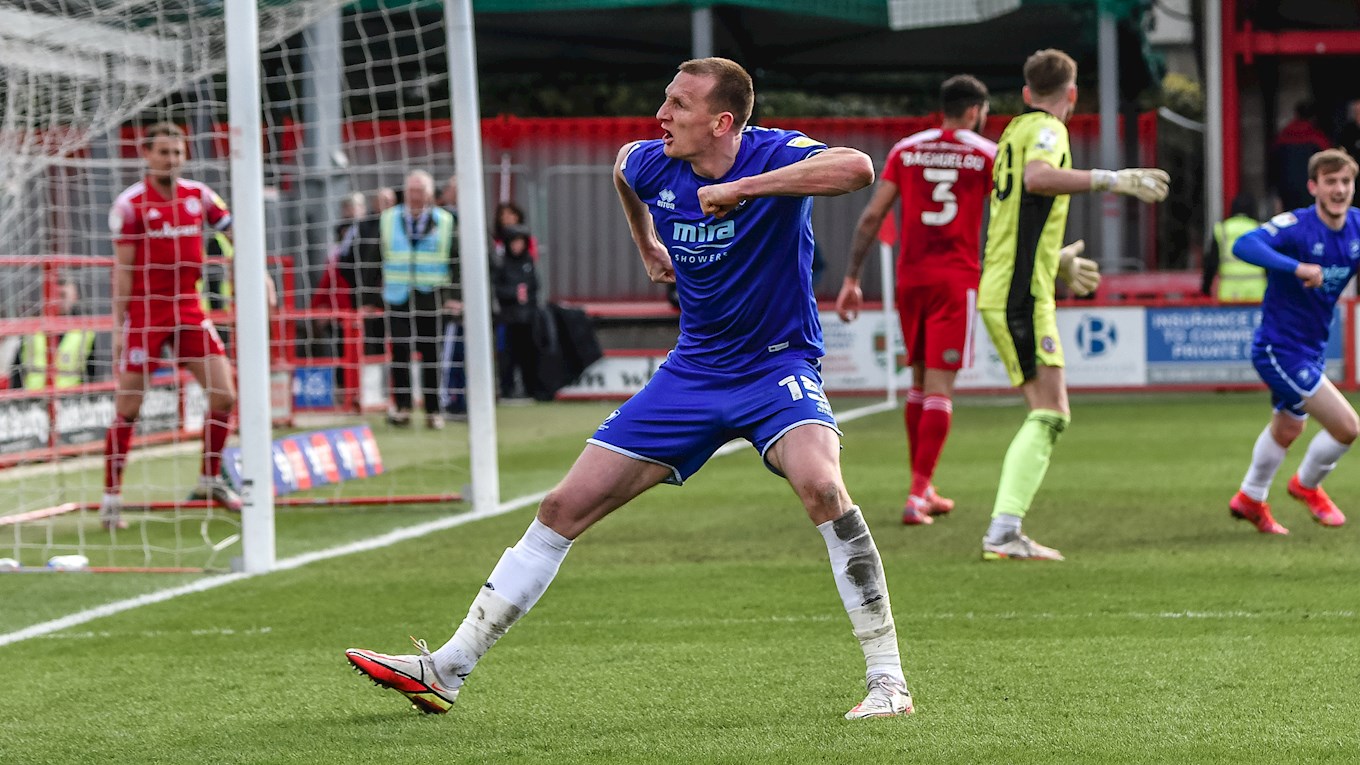 McConville saw his header on 71 minutes tipped over the bar by Evans and the Welsh stopper kept out another shot from Hamilton as the game entered a lively final ten minutes.

Accrington got a fourth when Michael Nottingham's dash forward saw him cross low and Chapman touched the ball past Evans into his own net.

Only a minute later though and there was just one goal between the sides again as May's good work on the right allowed Wright to sweep in at the near post.

Just like the first half, there was six minutes of stoppage time shown at the end of the half, and it was towards the start of additional time that Accrington were reduced to ten men when Sykes was dismissed for picking up a second yellow card.

While it had been the hosts who were able to take advantage of stoppage time to get their goals at the end of the first half, this time it was Cheltenham who benefited, and remarkably six minutes into the additional time Boyle slammed in his second with a striker-like finish to salvage a thrilling late point.

Tickets and away travel for Cheltenham Town's away fixture at Accrington Stanley on Saturday 2 April are now on sale.

The match at the Wham Stadium is the first of six matches in the final month of the season.

Robins fans will be located in the Studio Stand for the game. If supporters wish to transfer to the Coppice Terrace they can do so with a seated ticket.

Wheelchair users should contact Jo Ashton on 01254 356950 if they have any additional requirements beyond tickets.

If you are booking onto the Travel Club coach heading to the match it will leave from the Jonny-Rocks Stadium car park at 9.30am.

When buying through the ticket office at Cheltenham, whether online or in person, it will mean 5% of ticket income purchased will go back to the Robins.

If you are unable to pick up your ticket before the match you can do so at the Wham Stadium ahead of kick-off. 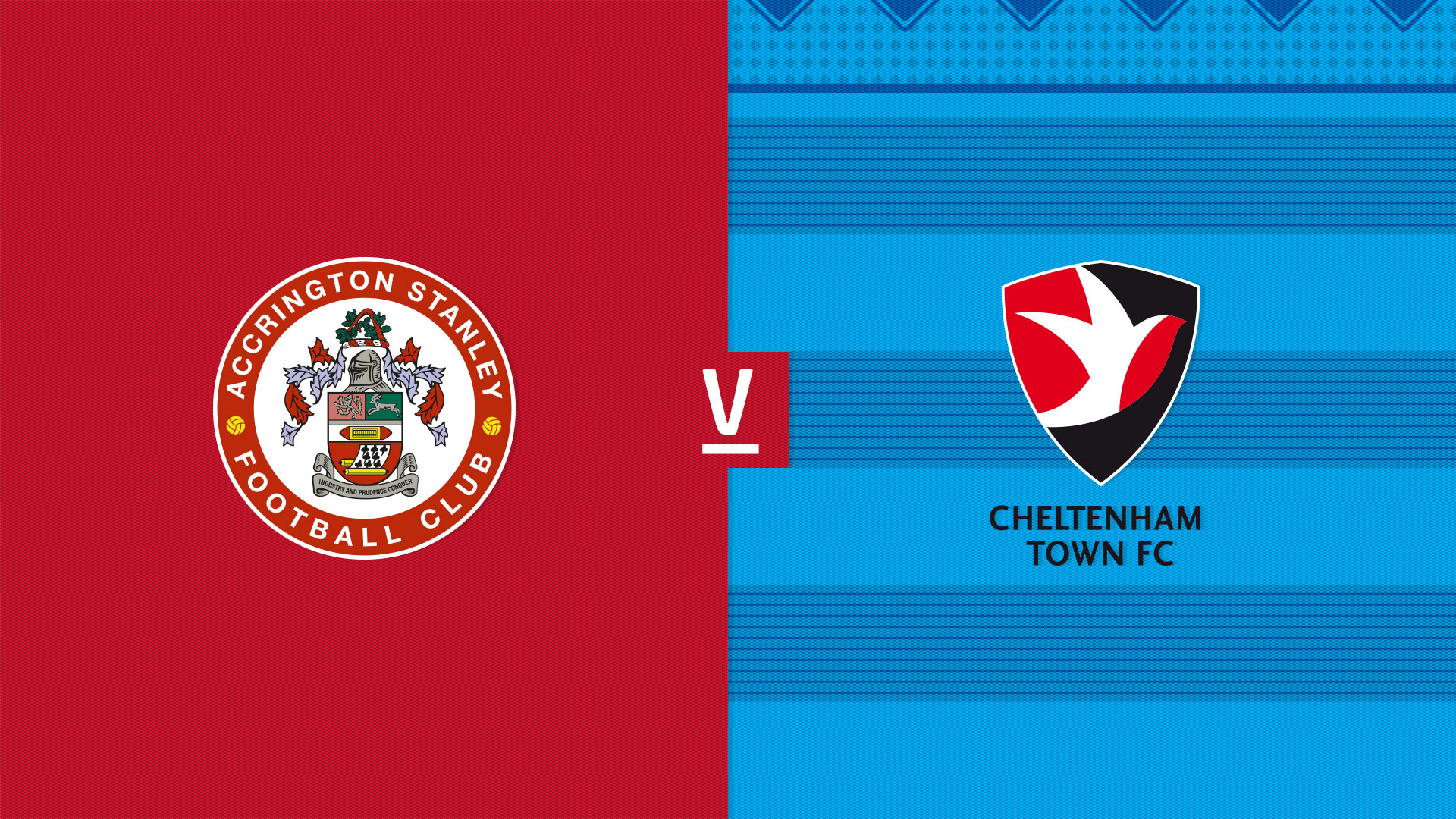 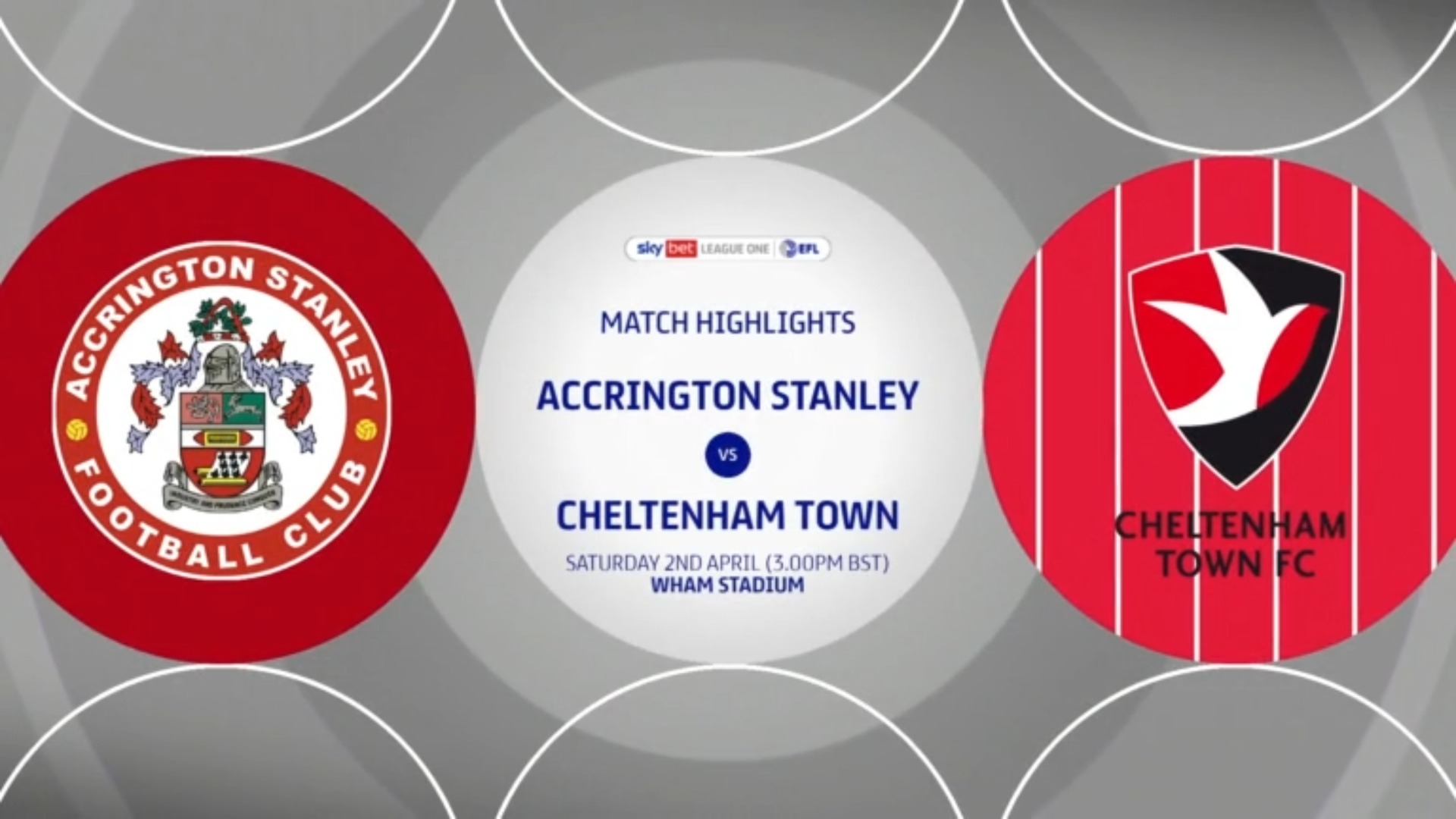 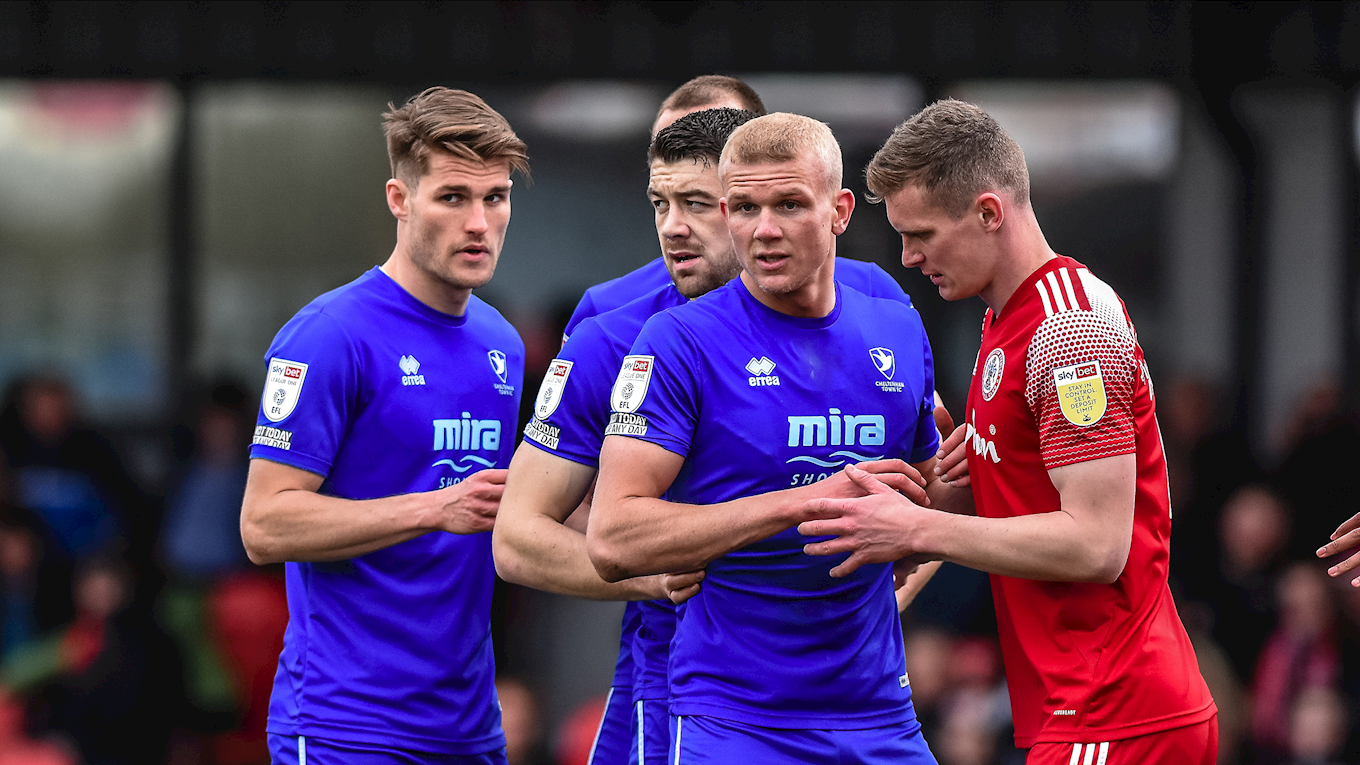