Cheltenham Town wrap up October with a visit from Forest Green on Saturday (kick-off: 3pm).

A busy second month of the campaign comes to a close with an outing against the only other Football League side in Gloucestershire.

Both teams have made pleasing starts to the League Two calendar and will eye up Saturday's encounter as another opportunity to extend that positive opening.

The match is taking place behind closed doors because of the impact of covid-19. Despite the disappointment of not being able to attend the Jonny-Rocks Stadium for the game you can still watch the action by tuning in online with iFollow by purchasing a match pass for £10.

There are no new injury concerns after Tuesday night though there are still a number of players out of action.

Sean Long, Callum Ebanks, George Lloyd, Finn Azaz and Matty Blair are all missing while Scott Flinders is unlikely to be risked on his return from a broken leg. Dan Bowry should be back and fit enough for a place in the squad.

You can also watch what the players have been up to in training this week and also look at the photos from training preparation before the weekend.

A midweek win over Grimsby made it back-to-back wins for Forest Green heading into Saturday's match up.

After starting the season with consecutive defeats in cup games against Leyton Orient and Exeter the Nailsworth outfit have enjoyed a good start to the season picking up points in all of their matches except for a 1-0 loss at Colchester United 11 days ago.

Well-backed by green energy industrialist Dale Vince, they boast a talented squad at this level, and have been busy in the transfer market again in the build up to this season. In fact manager Mark Cooper has signed 100 players in his four years in charge at The New Lawn.

In midfield, former Robins man Carl Winchester is a key component in their engine room, while Elliott Whitehouse's combative approach also comes in useful. Scott Wagstaff was another noteworthy arrival in the off-season, bringing with him Championship and League One experience.

Up top they landed the signing of Jamille Matt in the summer after the big striker left Newport County AFC. The 31-year-old has enjoyed a strong Football League career having started off in non-league at Sutton Coldfield Town before a move to Kidderminster sparked future transfers to the likes of Fleetwood, Blackpool and Grimsby.

Other forward options include Matty Stevens, who was signed for an undisclosed fee from Peterborough United, while Aaron Collins has regularly been a handful for League Two defences.

It's now ten years since FGR were taken over by Vince. The 59-year-old vowed to take the self-proclaimed Little Club on the Hill into the Championship within a few years of taking over but has so far achieved just the one promotion. Despite coming at a significant cost, he's determined to achieve the aim and has plans to move the club from its traditional base in Nailsworth to a new site just off the M5 motorway which is set to be an eco-friendly stadium the same size in capacity and built with car parking for 1,700 cars.

Mark Cooper turned down the chance to manage Notts County in the Football League to drop down into non-league football with Forest Green when he took charge in 2016.

He's now one of the longest serving managers in the top tiers of English football and can also recall time spent managing the likes of Kettering Town, Tamworth, Darlington and AFC Telford United previously.

During his playing days he represented the likes of Rushden & Diamonds, Hednesford Town, Macclesfield Town and Forest Green. He had a one-season stay at FGR too where he featured in midfield for a team managed by former England international goalkeeper Nigel Spink.

His number two joined this summer. Richard Dryden, who hails from Stroud and played top flight football for Southampton, was also his assistant at Notts County, Tamworth and Darlington. He also had a stint as manager of Worcester City between 2007 and 2010. 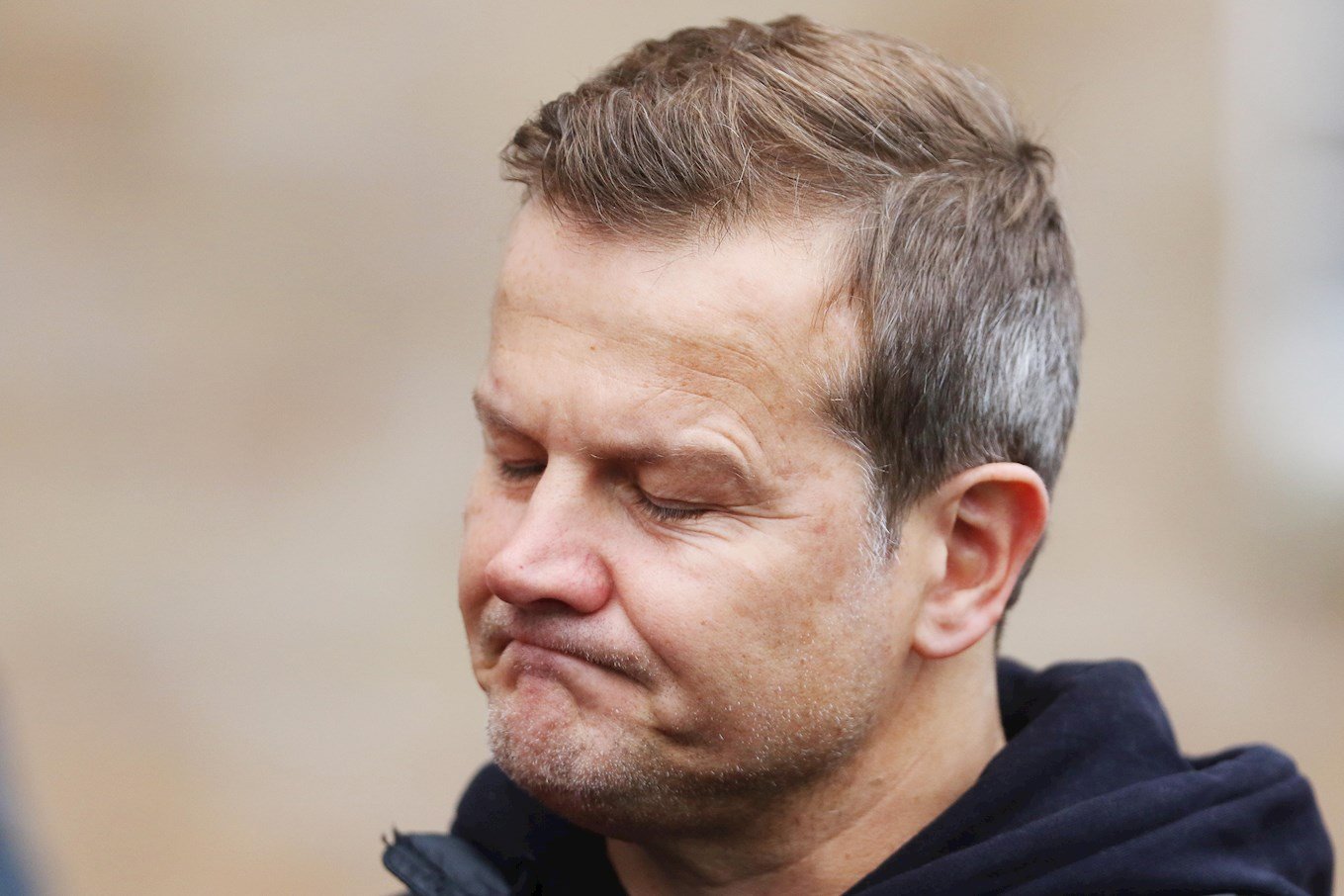 One to watch: Jake Young

It's Jamille Matt who leads the scoring charts so far this season for Forest Green, but the man who has been in and among the goals of late is 19-year-old forward Jake Young.

Signed in July from Sheffield United, the former Guiseley youngster has four goals to his name this term and has scored in back-to-back matches heading into Saturday's clash.

His first goal came in an EFL Trophy match-up with West Brom under-21s and his first EFL goal came as the winner in a 1-0 success over Stevenage. 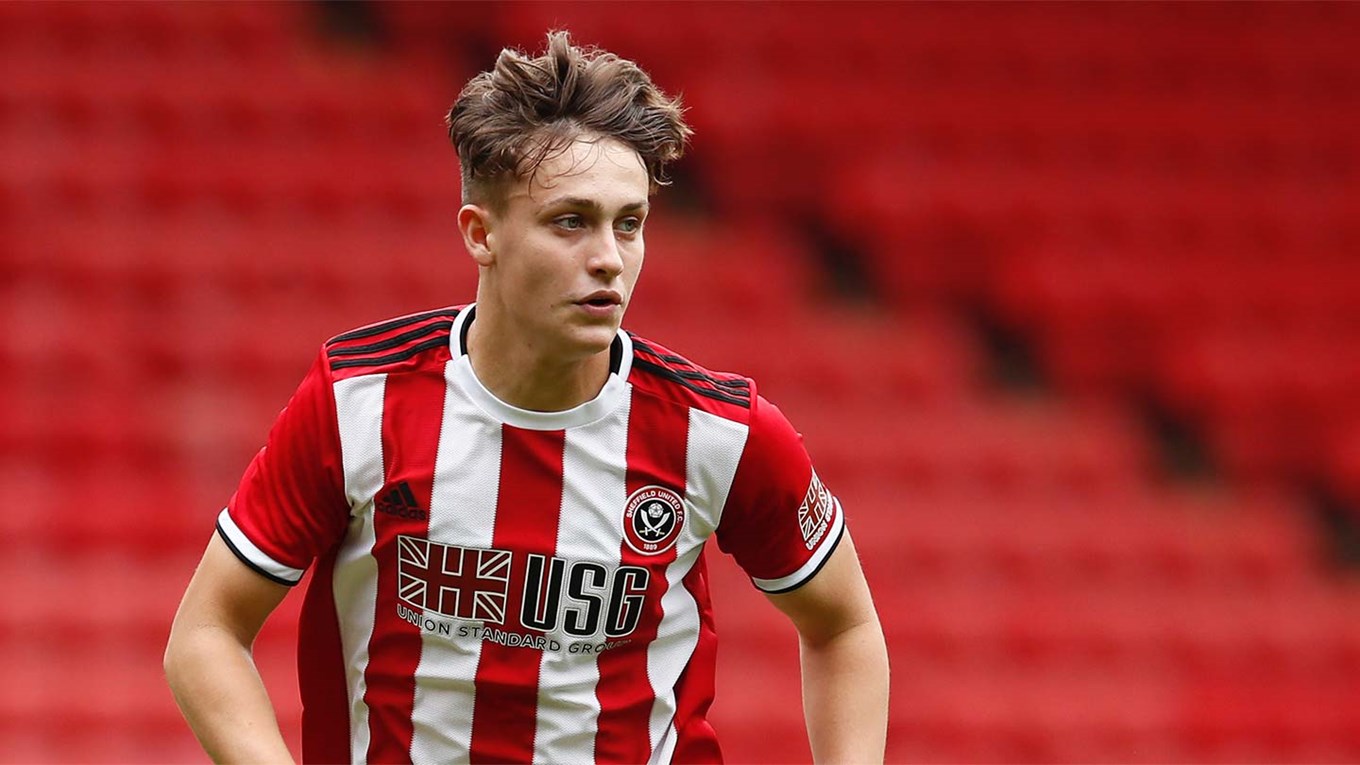 You can subscribe to watch Saturday's match online from home with an iFollow match pass.

It's available to buy for £10 and will allow you full 90 minute access to watch the game.

Purchase your match pass online and watch the action unfold from 3pm. 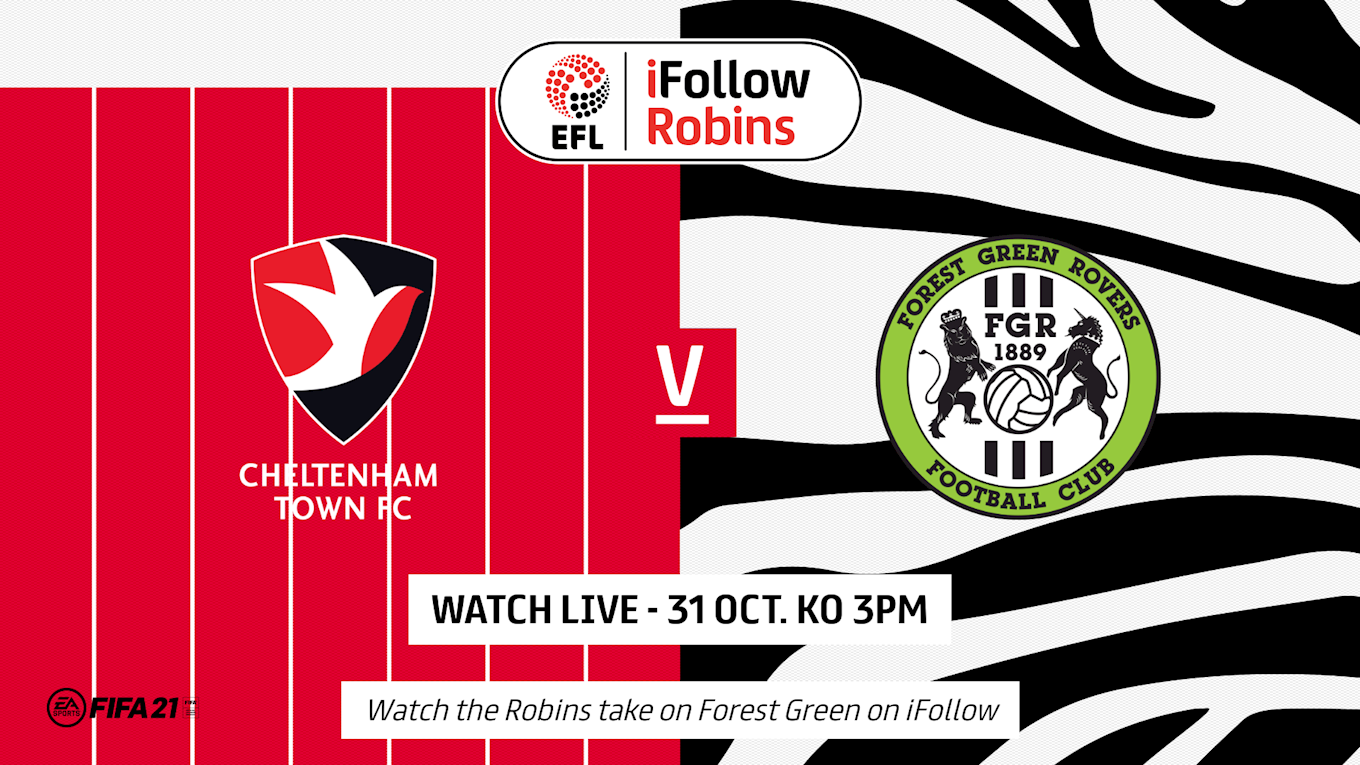 You can purchase the match programme for Saturday's game through our online shop. It is available in either digital or print format.

The main interview in the programme is forward Reuben Reid while there are also features with Andy Williams and Finn Azaz.

Michael Duff previews the day's action, there's a detailed look at the opposition, under-18s midfielder Josh Aldridge discusses the first year of his scholarship, there's the latest from Cheltenham Town Ladies, a look around League Two and much more.

The 52 page digital version is available to buy online for £2, while the print edition can be bought for £2.50. 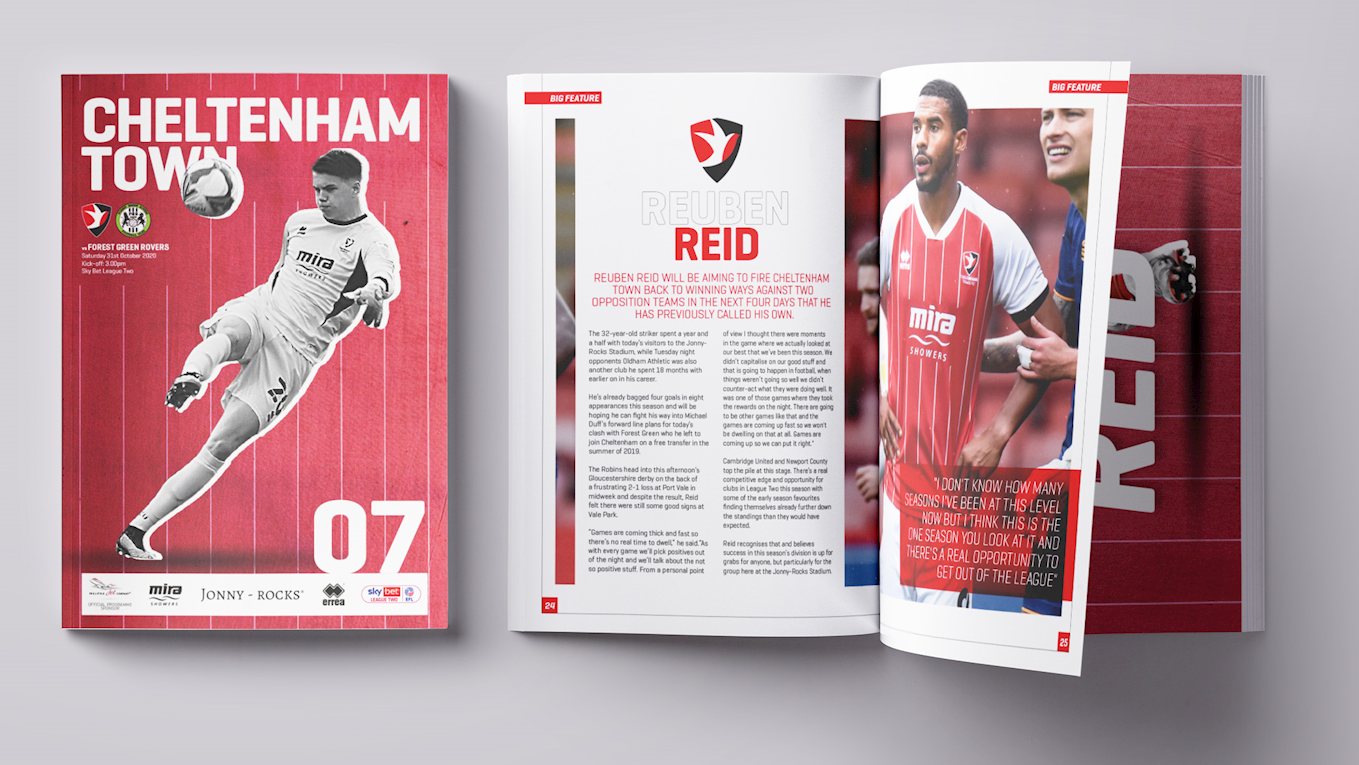 We are delighted to have Crowdfunder as our digital match sponsors for Saturday's match.

Crowdfunder is an online fundraising platform for projects, campaigns, charities and businesses.

It's a fantastic way of using the community to support fundraising efforts for different projects online - they've raised over £100 million and helped over 80,000 individuals, charities, businesses and community projects.

The big screen at the Jonny-Rocks Stadium is in place thanks to a project funded through Crowdfunder, while the supporter cut-outs that featured in last season's League Two play-off semi-final, and the players headshave for the NHS, all came through the Crowdfunder platform. 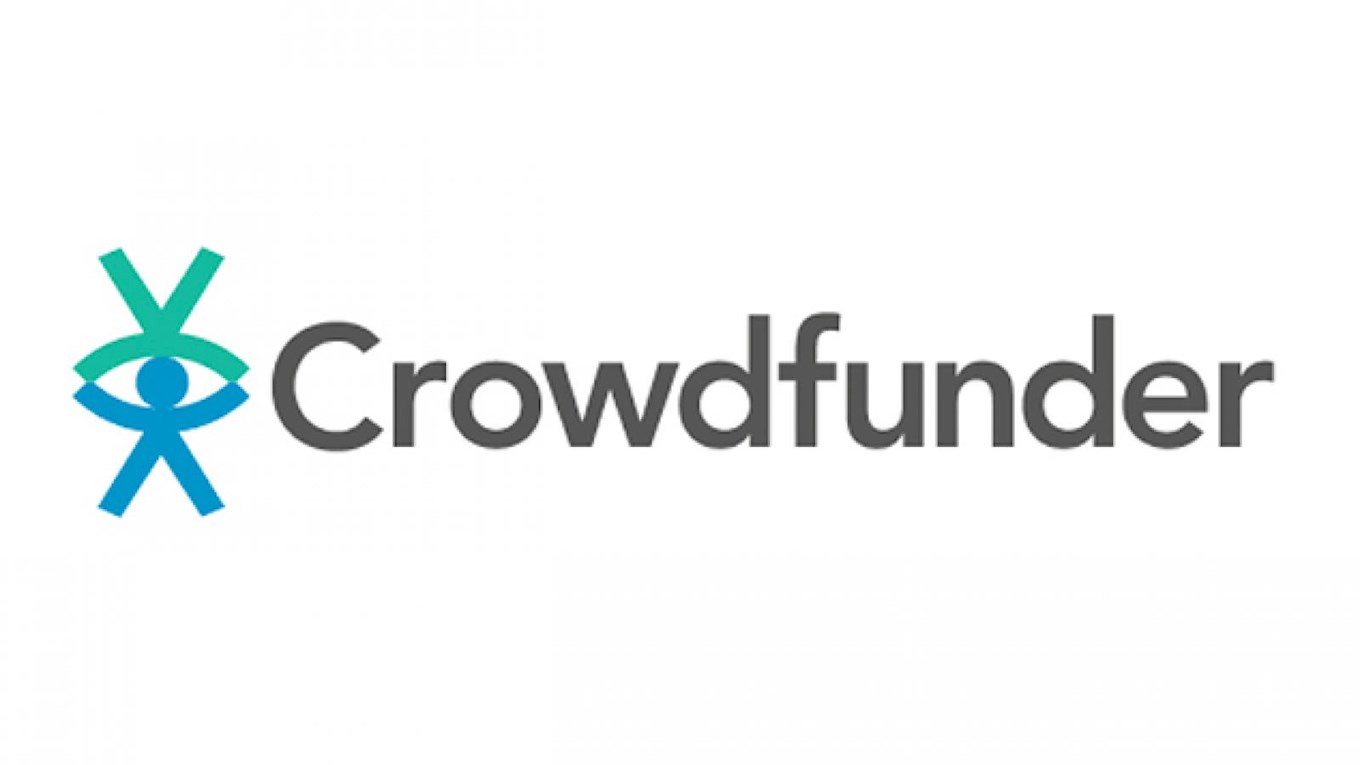 A match pass is available to purchase for £10 if you want to watch the game online with iFollow.

Following the end of the game you can check out the club website to read a match report and to see reaction to the game.

Extended highlights will be available to watch on iFollow a short time after the full time whistle too.

Cheltenham Town have returned to winning ways after beating Forest Green 2-1 at the Jonny-Rocks Stadium.

Goals from Will Boyle and Andy Williams handed hosts Cheltenham the Gloucestershire bragging rights as Michael Duff’s side have climbed into the top three of the League Two table.

In a frenetic start to the first half, both sides were keen to mark their territory with an early goal. Despite the protestations of goalkeeper Lee McGee, it was Cheltenham centre-back Boyle who opened the scoring in the 20th minute.

Ben Tozer’s customary long throw caused problems for McGee who was caught under the flight of the ball, before Boyle nodded into an empty net at the far post.

Cheltenham were reluctant to offer their Gloucestershire counterparts an incentive to chalk off their early lead as Charlie Raglan led the hosts through to half time with some full-blooded tackles.

While Cheltenham controlled the lion's share of possession, there was little respite for an injury stricken Forest Green defence who were lucky not to be two down before the half-hour mark. Goalkeeper McGee limited the hosts to a slender advantage before the break as he thwarted Andy Williams’ header from point-blank range.

Rovers' boss Mark Cooper was forced into a unforeseen change before kick-off as Jordan Moore-Taylor replaced the injured Nicky Cadden, who was named in the original line-up for the in-form travellers.

Forest Green had only lost one in their last six in all competitions before this one, and even managed to stave off a competitive loss to Cheltenham for over 22 years, having last lost to their Gloucestershire neighbours in 1998.

Duff’s side were in the mood to rest on their laurels and instead go for the jugular as the second half got underway.

Starting at the base of a threatening attacking trio, May was the architect of Cheltenham’s second goal, after the interval. Threading a pass through the Forest Green backline, Williams was afforded room to run in on goal and calmly convert past the helpless McGee to double the hosts advantage before the 60th minute.

After taking control of proceedings soon after, the visiting Rovers were handed a lifeline when Chris Clements bundled Scott Wagstaff over inside the box. Substitute Aaron Collins converted from the penalty spot to halve the deficit with 20 minutes left to play.

Ells Chapman made his league debut when he replaced May as Duff reverted to a more familiar shape. Cheltenham's boss had started former Forest Green forward Reuben Reid up front with Williams for the first time to cause problems for Forest Green in the first half.

Cheltenham will travel to Boundary Park on Tuesday evening (kick-off 18:00) to contest another three points against Oldham Athletic. 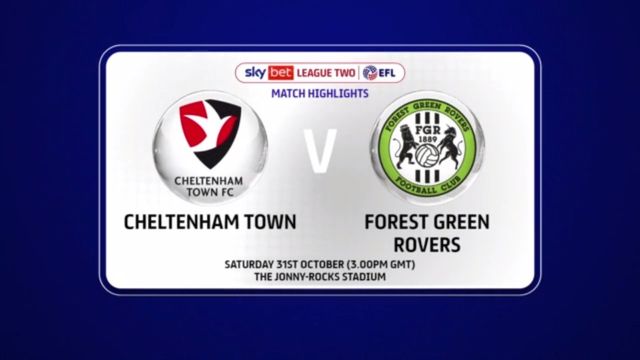 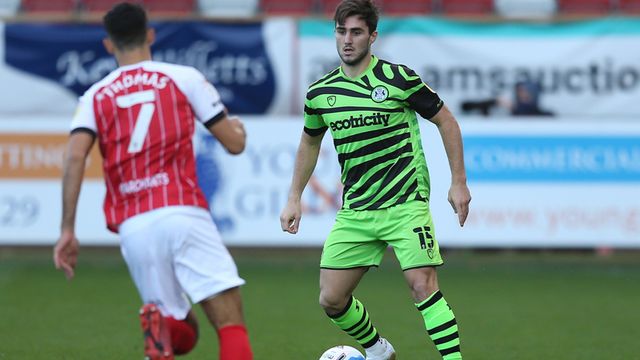