The league table counts for little at this early stage of the season, but despite that it's already a 7th against 8th clash between two teams who have made good starts to the League Two season at the Jonny-Rocks Stadium on Saturday (kick-off: 3pm).

Crawley Town are the visitors for a behind closed doors meeting this weekend. The Red Devils have picked up seven points from their four outings so far, while for Cheltenham it's six points from three and a good opportunity to make an early leap into the play-off spots with a winning performance.

It should be an intriguing test against a team who were one of the few not to appear at the Jonny-Rocks Stadium last season because of the shortened campaign.

Watch the match in full online with a match pass on iFollow which is available to buy for £10.

We are delighted to have Jonny-Rocks London as our digital match sponsor for the game.

Goalkeeper Scott Flinders returned to the team on Tuesday evening and could be considered to be involved again on Saturday.

Sean Long is definitely out after having surgery on his hip while Callum Ebanks knee injury also rules him out.

Crawley head into Saturday's encounter on a three match unbeaten run having picked up since their opening day league defeat at Port Vale.

Since that loss in Staffordshire they've registered three points in wins over Scunthorpe United and Oldham Athletic, while last time out they drew 1-1 with Southend United.

They lost towering front man Ollie Palmer in the summer. The striker has been the deciding factor in recent games between the two clubs but despite his exit they boast a number of exciting options who have helped them to 7th place early on in the campaign.

Long-serving goalkeeper Glenn Morris is highly thought of by the Crawley supporters, and he lines up behind a defence that may include 35-year-old Tony Craig who is now a Crawley player having been a teammate of Liam Sercombe's in the past two seasons at Bristol Rovers.

Defensively Jordan Tunnicliffe is now in his second season with them having stepped up from the National League, while Northern Irishman Josh Doherty could also be involved.

In midfield they now have Jake Hessenthaler to call upon. He's the son of current Dover Atheltic manager Andy, while George Francomb, youngster Tyler Frost and Jack Powell, who spent much of last season loan at Aldershot Town, may also feature.

Ashley Nadesan and Tom Nichols have been their preferred pairing up top. One alternative forward option though is Sam Ashford who enjoyed a goal scoring season with Hemel Hempstead Town last season in the National League South last term and has subsequently earned himself a move into the Football League for the first time in his career.

John Yems returned to Crawley to be named manager over a decade since filling in for the Red Devils in the same role in a caretaker capacity back when they were in the National League.

Since that spell he had worked at Exeter City as number two, as a scout and also had a lengthy stay with AFC Bournemouth in a behind the scenes role as they rose up through the divisions.

At the start of his career he had a brief spell in charge of non-league Horsham in 1993, but since he's returned to Crawley he's impressed and subsequently been rewarded with a new deal that is due to keep him there until 2023. 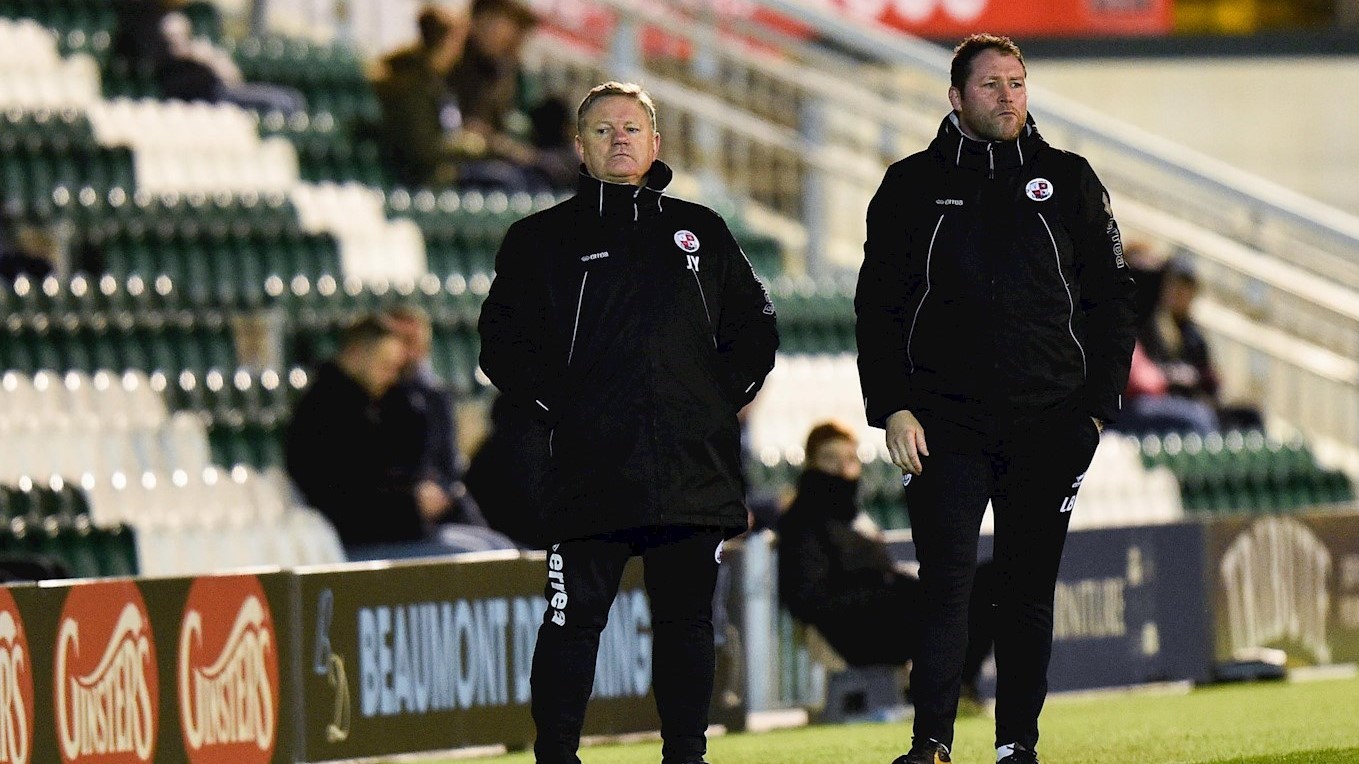 In the short time he spent at the Jonny-Rocks Stadium last season Tom Nichols never really got the chance to get going in his time in Cheltenham colours.

He moved to the club on loan from Bristol Rovers on deadline day in January and with the shutdown of the season in March because of covid-19 only had a few opportunities, though he did appear in the play-off semi-finals.

He's made a good start to the season with Saturday's opponents, netting twice, and has struck up an early relationship with fellow forward Ashley Nadesan.

Previously after beginning his career with Exeter, he has also been at Peterborough United and Bristol Rovers with the two latter clubs spending undisclosed transfer fees to capture his signature. 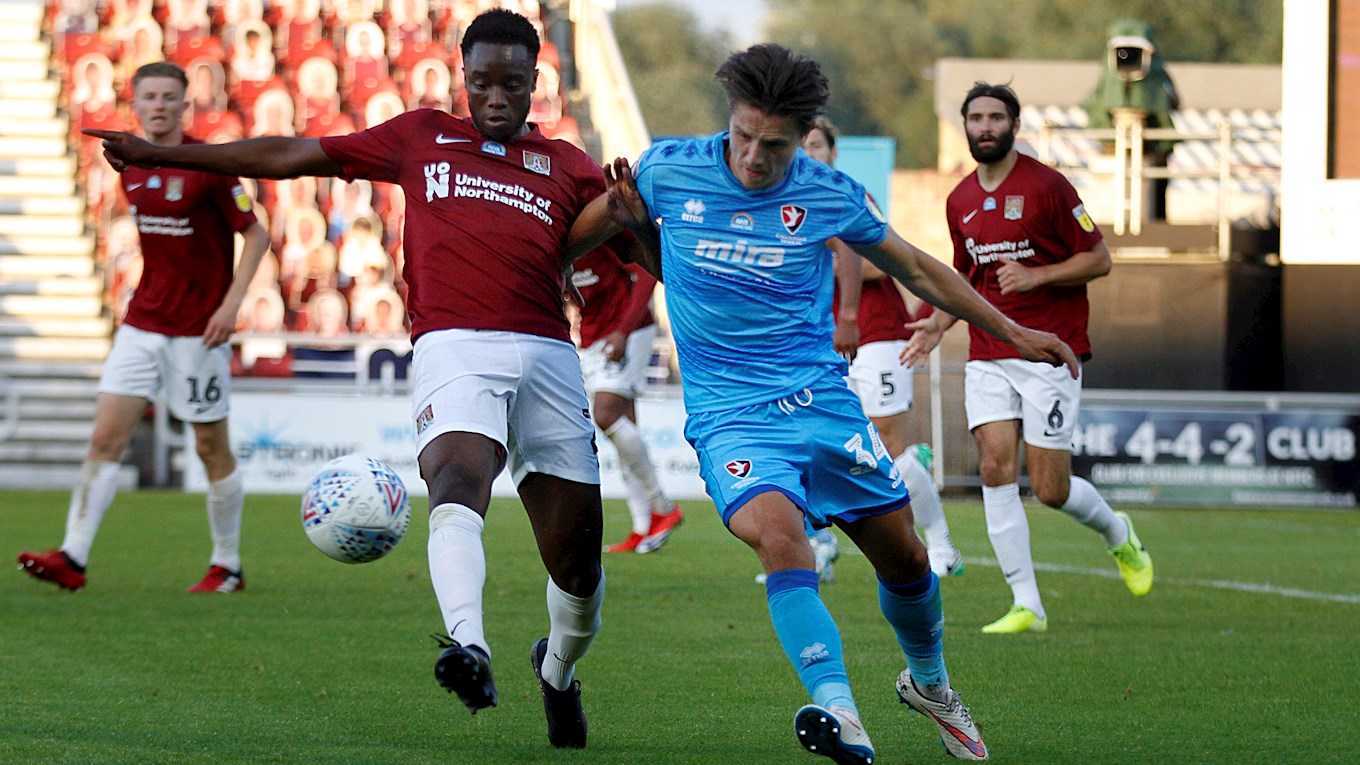 The 60 page digital edition of the programme features a big interview with Matty Blair, interviews with Liam Sercombe, Cheltenham Town Ladies boss Tom Davies, Tom Sang and much more. It's available to buy for £2 and can be downloaded to your device.

You can also purchase a limited edition hard copy version for £2.50 which again features a big interview with summer arrival Blair, plus an interview with second year scholar Toby Lawrence plus more with Liam Sercombe. 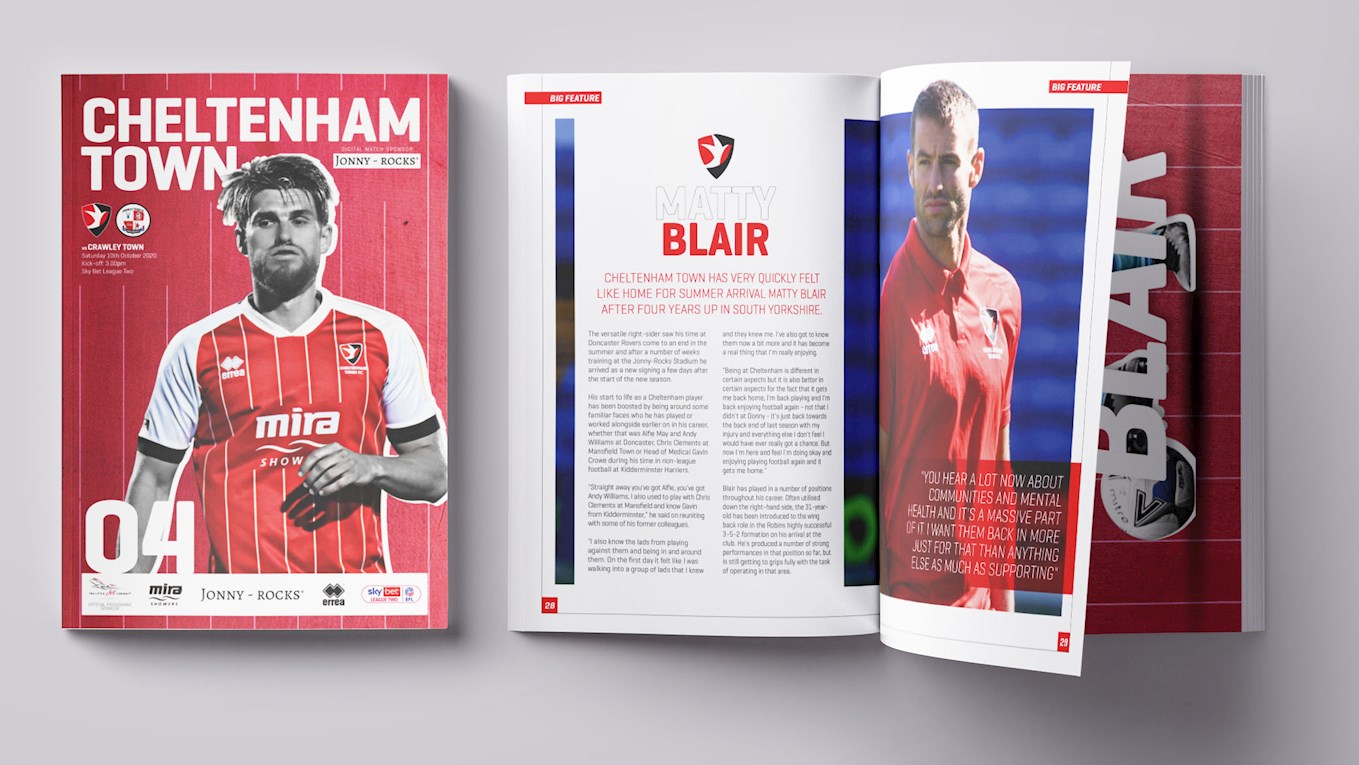 We are very happy to have Jonny-Rocks London as our digital match sponsor for Saturday's fixture.

The full 90 minutes are available to watch online from Saturday's game with iFollow.

You can buy a match pass to view all of the action. Buy one online for £10 and enjoy the game from home. 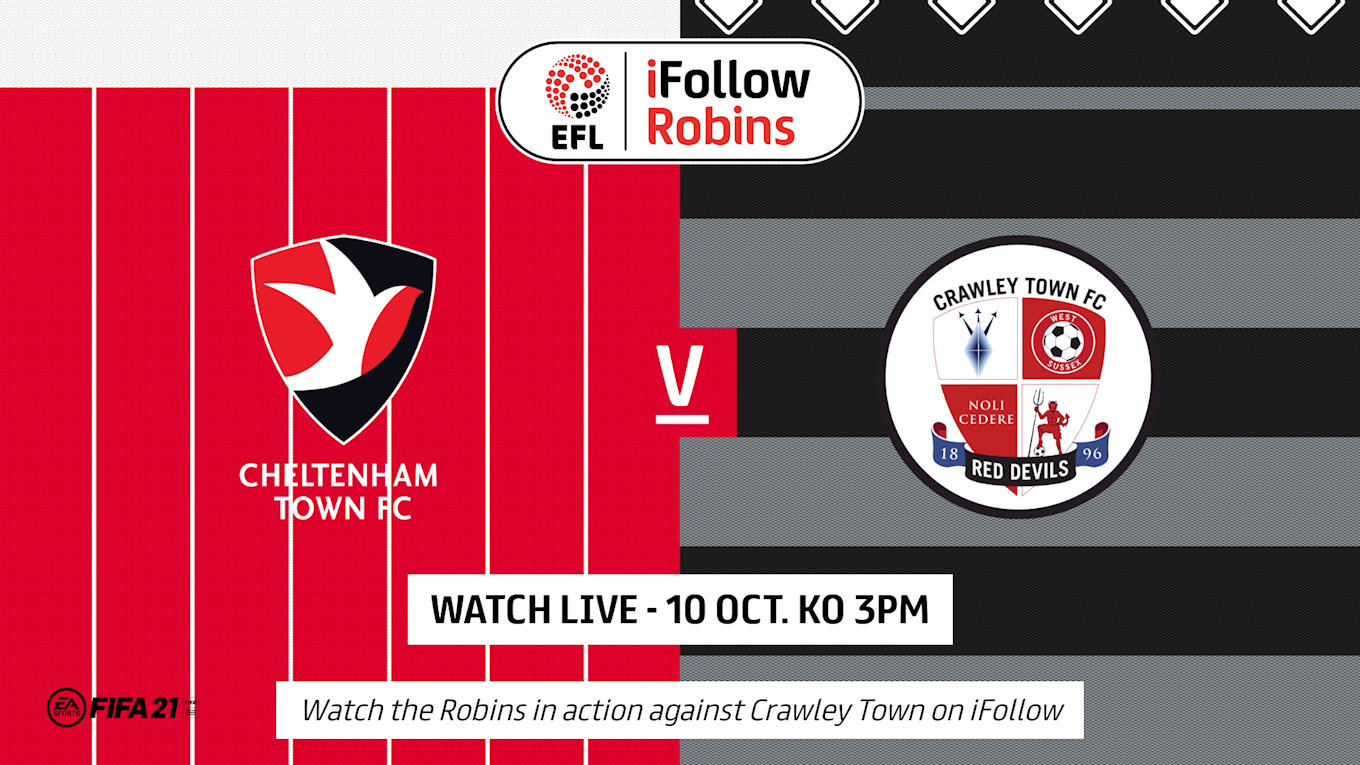 Stay up to date with events at the game by following @CTFCofficial on Twitter. You can also find team news and updates on the CTFC Facebook page and Instagram.

Post-match check out the website for a match report looking back on the contest plus reaction from inside the camp.

A match pass to watch the game on iFollow is available to buy for £10 and you'll be able to see extended highlights for free on iFollow a few hours after the game. 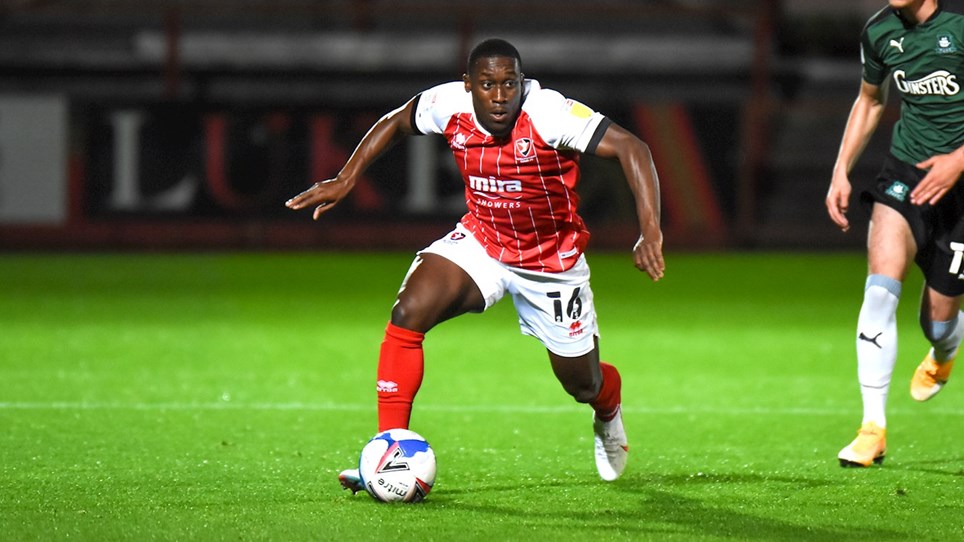 Goals from Andy Williams and a dubiously awarded first-half Tony Craig own goal handed Cheltenham a fourth successive win in all competitions as Crawley Town were defeated 2-0 at the Jonny-Rocks Stadium.

Cheltenham’s third win in their first four league ties has propelled the Robins up to fifth place in the League Two standings.

Cheltenham’s defensive unit were key at both ends as the Robins searched for the game’s opening goal in the first-half.

Chris Hussey was constantly making headway down the left channel all afternoon, but Crawley’s defensive shape wasn’t to be broken down by corner deliveries as Hussey won a succession of set-pieces for Cheltenham.

In fact, it was Ben Tozer’s customary long-throw that picked the Crawley lock on the half-hour mark. His throw-in towards a congested penalty box was flicked on by a mixture of Will Boyle but eventually Crawley defender Craig’s head as the ball looped over goalkeeper Glenn Morris.

A well earned advantage before the break wouldn’t deter the Robins searching for more goals as the in-form Tom Sang replaced Finn Azaz at the interval.

Sang’s energy offered the Robins a different attacking dimension but ultimately it was Matty Blair’s ingenuity to carve out another chance for the hosts that settled the tie five minutes into the second period.

Williams finished with aplomb as he received the ball in the Crawley penalty box - experienced goalkeeper Morris hadn’t a chance to deny Williams his second for the Robins this season.

Morris is highly thought of by the Crawley supporters, and he lined up behind a defence that included 35-year-old centre-back, Craig, a former teammate of Cheltenham’s Liam Sercombe for the past two seasons at Bristol Rovers.

Sercombe made 36 accurate passes in an impressive sixth outing of the season for a midfielder destined to be a key part to any success Cheltenham hope to enjoy come the end of the campaign.

Lloyd was denied on several occasions by Morris, whose fingertip save prevented the youngster scoring the game’s first goal as hosts Cheltenham attacked from the off.

John Yems’ Crawley came into the encounter on a three match unbeaten run having picked up since their opening day league defeat at Port Vale.

Though the Red Devils were victims to the Robins’ sound defensive and attacking display - one that’ll encourage fans away from the Jonny-Rocks as the season unfolds.

Cheltenham will play hosts to Grimsby Town on Tuesday (kick-off: 7:45pm) after the fixture was re-scheduled following last month’s cancellation. 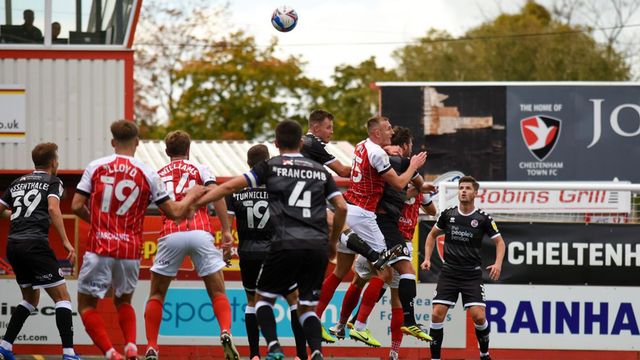 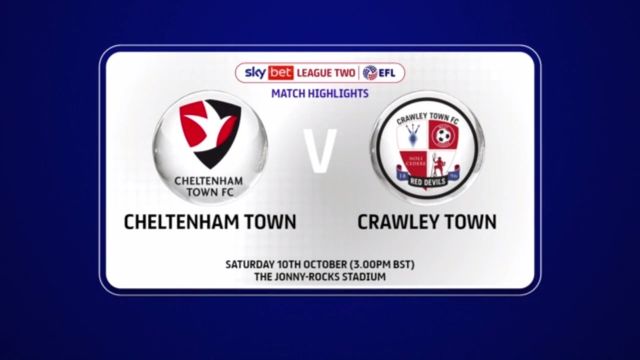