The in-form Robins are full of confidence and will make the trip to Nottinghamshire aiming to continue their good run.

Opponents Mansfield may find themselves in 19th but still boast a good and threatening squad at League Two level so boss Michael Duff will be keen to highlight the challenge that awaits his side at the One Call Stadium.

Watch the game in full online by purchasing a match pass on iFollow.

The injury list still includes Will Boyle, Chris Clements and Ellis Chapman ahead of the trip.

Alex Addai and George Lloyd have been back in training and decisions will be made on whether they can be considered to make the squad.

The Stags have endured a frustrating campaign that saw them get off to a slow start, failing to win in any of their first 14 matches in all competitions. It was a run that cost former boss Graham Coughlan his job by the end of October and since November Nigel Clough has been in charge.

They've improved since then and tend to go on streaks of winning games but haven't been able to be more consistent, particularly of late, and find themselves 19th in the table heading into Tuesday's contest.

On Saturday they lost at Barrow and saw goalkeeper Aidan Stone forced off with an injury. That means former Sparta Prague goalkeeper Marek Štěch is expected to be back in goal for them for Cheltenham's visit.

They also lost key defender Ryan Sweeney to a red card in the defeat at Barrow, but they have recently brought in the highly experienced Jake Wright after a spell as a free agent. In Farrend Rawson they also boast a strong physical presence defensively while full back Mal Benning, a former loanee at Evesham United from his Walsall days, has six years of history with the Stags.

In midfield Republic of Ireland international Stephen Quinn brings plenty of higher level experience, and it's the same story for James Perch, who can name Nottingham Forest, Newcastle United, Wigan Athletic and QPR among his former employers.

Harry Charsley and Kellan Gordon are two younger bodies in their midfield pack who will aim to cover a lot of ground.

Their attack features former Crewe Alexandra man Jordan Bowery, who has eight goals for them this term, with ex-Torquay United goal getter Jamie Reid looking to make an impact having moved away from Devon. Jason Law and Tyrese Sinclair are two younger options after Nicky Maynard and Andy Cook were allowed to join rival clubs back in January.

With over two decades of managerial experience, Nigel Clough has experience across the divisions. He started in non-league with Burton Albion where he played a key part in their rise, and has also had stints in charge in the Championship with Derby County and Sheffield United, while before joining Mansfield he returned to Burton for another four-and-a-half year spell.

Combined with his playing days he brings massive experience. He made over 300 League appearances for Nottingham Forest, before going onto play for Liverpool and Manchester City with his playing career ending at Burton while balancing playing and managing.

On the international scene, he earned 14 caps for England in the early nineties. 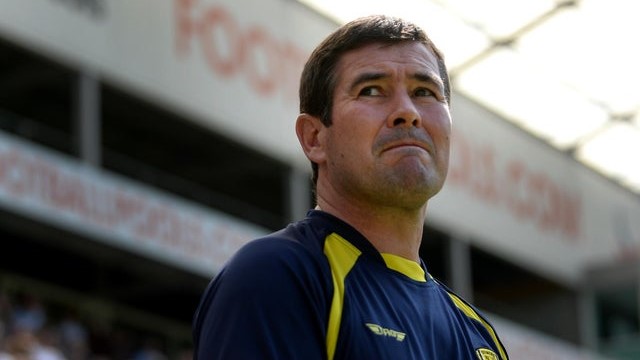 One to watch: Ollie Clarke

Captain Ollie Clarke has made 26 appearances for Mansfield this season. It's his first campaign at the One Call Stadium having been signed by his former Bristol Rovers boss Graham Coughlan in July 2020.

The 28-year-old has always been noted for his leadership qualities in the middle of the park and before transferring to the Stags had made over 200 League appearances for the Gas, helping them go from the National League to League One.

He was named Player of the Year at Rovers twice and in his time there while he was younger had loan spells in non-league at Mangotsfield United, Clevedon Town and at Gloucester City when the Tigers were groundsharing at the Jonny-Rocks Stadium. 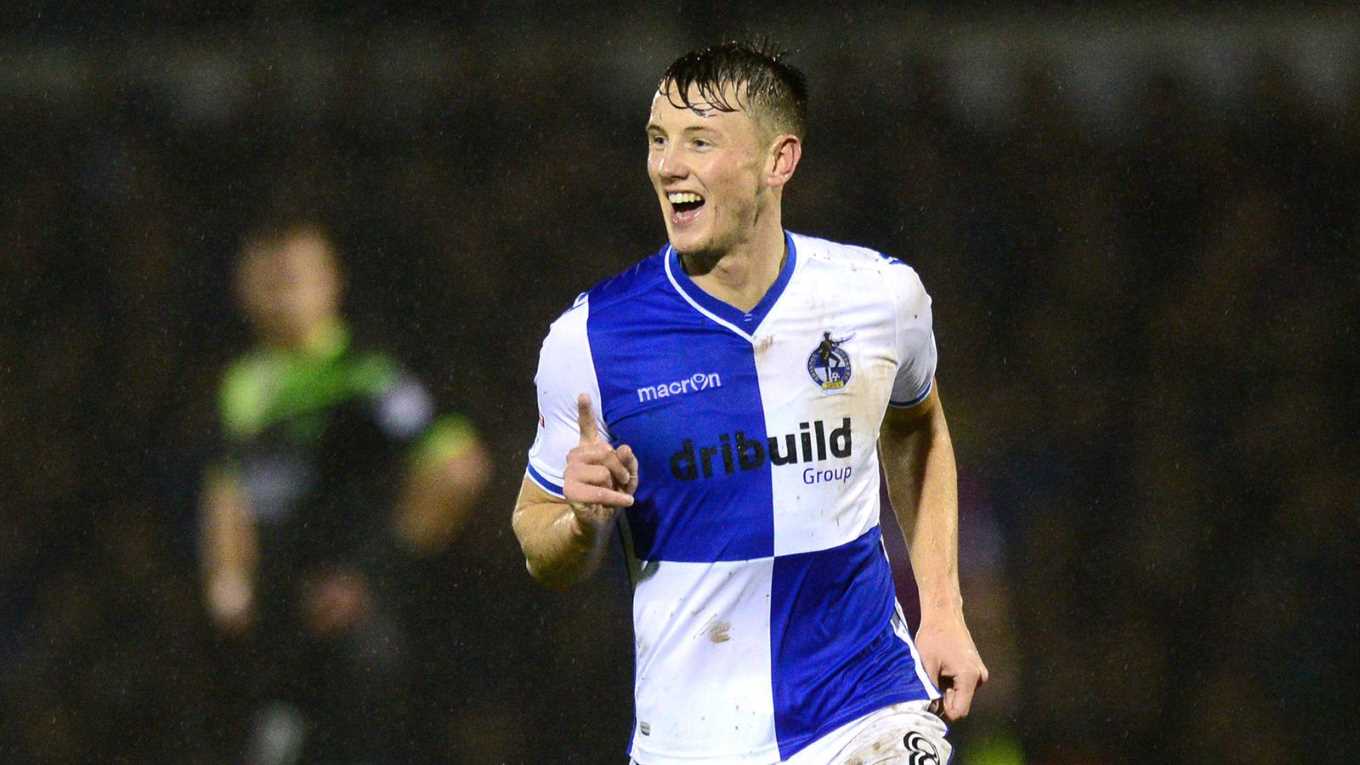 The match is live and available to watch online by purchasing a match pass on iFollow.

Match passes are on sale for £10 and you can subscribe before kick-off. 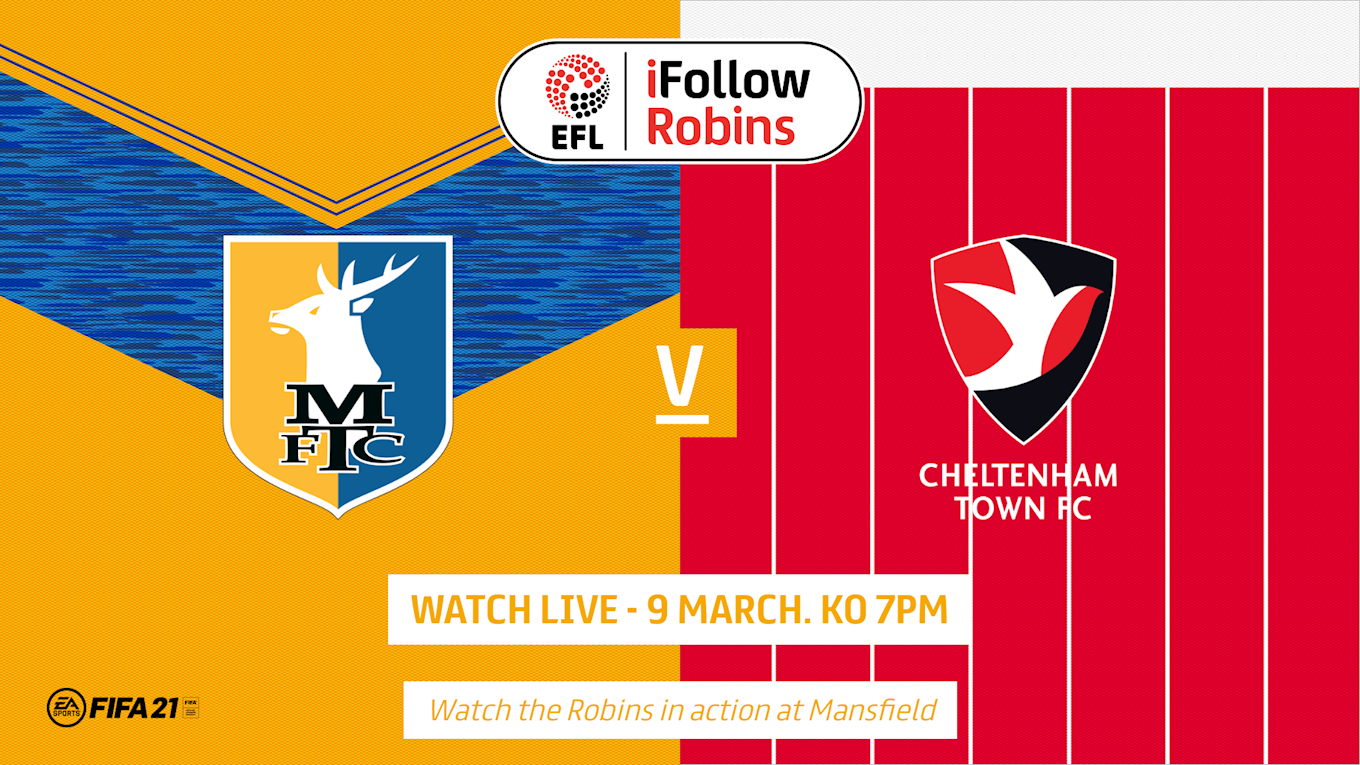 Keep an eye on the action by following @CTFCofficial for all team news and updates throughout the night. There will also be score updates available on the club's Facebook page and Instagram account.

Following the full time whistle you can read a match report on the club website and watch Michael Duff's post-match reflections on the website and iFollow.

Extended highlights are available to watch post-match on iFollow too.

Below-par Cheltenham Town suffered only their second defeat in 15 games at Mansfield Town's One Call Stadium this evening.

All the goals arrived in 14 second half minutes with Sam Smith scoring the first on the night to give them a lead against the run of play.

What followed was a calamitous passage of play, changing the complextion of the game. A goal by Jordan Bowery and two more from Jamie Reid in quick succession condemned the Robins to a rare defeat on their travels.

There were positives. It was Smith's third goal in seven matches since his arrival from Reading in January and there was a first start for Liam Sercombe since the match in Colchester at the end of December.

And despite the loss Michael Duff's side remained top after Morecambe's late equaliser at Forest Green Rovers.

But it's tight at the top and just six points split the leaders and the side in eighth, Exeter City, who just happen to be the next opponents in four days time.

"We weren't quite good enough tonight," said Duff after the game.

"The first half wasn't particularly good. We weren't happy about a few things but then we scored a really good goal in the second half, then made some silly mistakes.

"They didn't have to work hard for those goals. When you take the lead against a struggling side, you don't start trying to play out from the back for 10 or 15 minutes. If we'd have kept them quiet, with how resilient we've been, they would have started to lose belief. It would have killed their spirit.

"We made the mistakes so we weren't quite at it today." 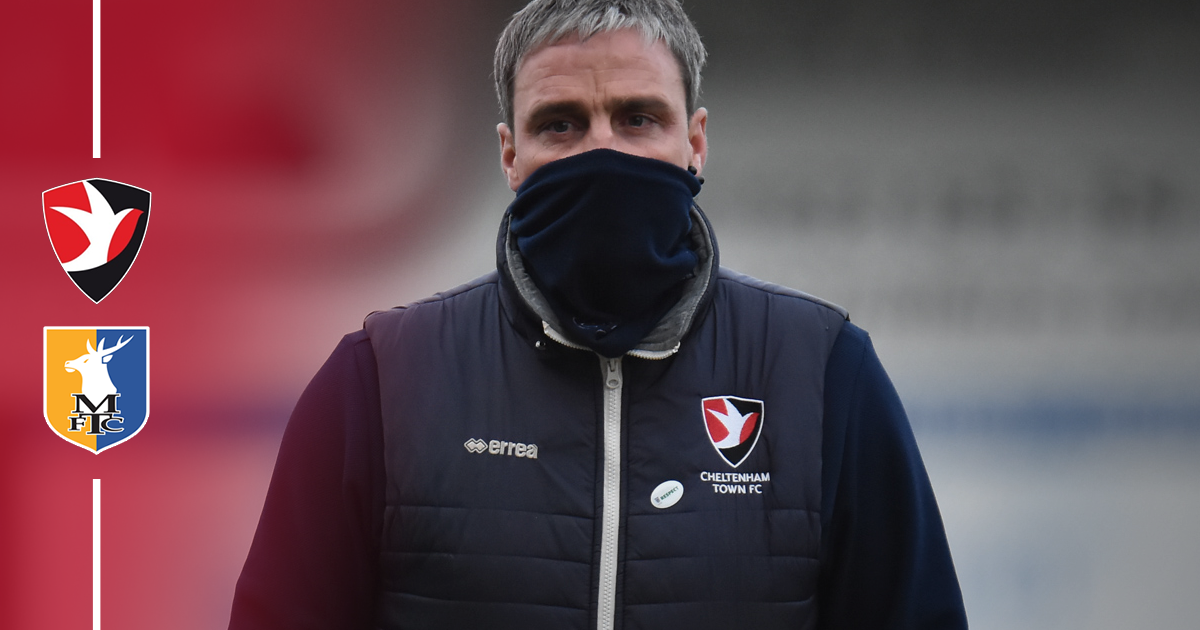 He made one change to his side, restoring Sercombe at the expense of Finn Azaz while striker George Lloyd returned on the bench in place of Tom Chamberlain.

The Stags made a positive start and produced the lion's share of chances in the opening 45 minutes. Josh Griffiths was forced into the first save of the contest as early as the fifth minute to deny former Evesham United man Mal Benning, low to his left. The goalkeeper was then carded for a clumsy challenge on Jamie Reid outside his box five minutes later, earning himself the first evening's first caution.

Next Sean Long was called into a desperate block to deny Reid with a powerful volley from 12 yards as Cheltenham soaked up the early pressure.

Duff's side's best chance of the half arrived midway through the first half when Charlie Raglan met a trademark Ben Tozer thow, but his glancing header dropped inches over the bar. Callum Wright later had the ball in the net but he was in an offside position when he flicked Sam Smith's effort past Marek Stech.

At the other end Bowery hit the post before Griffiths dropped to block the follow-up by Farrend Rawson.

But Duff's side started the second half with more purpose and made the breakthrough six minutes after the restart through a fine team goal.

It started in their own box with some cool play by Conor Thomas, who sent Liam Sercombe on his way. He found Smith and then Chris Hussey, moving past his man on the left before picking out Smith with another brilliant delivery, and the striker applied the perfect finish.

The home side though responded well and drew level only four minutes later when Bowery met Jason Law's ball form the left with a thumping finish from 12 yards.

They were in front through Reid after 63 minutes, bundling home from close range after a scramble caused by some more great play by Law.

And it was only another two minutes later when Bowery swapped passes with Reid before beating Griffiths at his near post.

There were two great chances to extend the lead yet further but Law and then Reid – on his hattrick – missed the target from promising positions, not that it affected the result in the end. 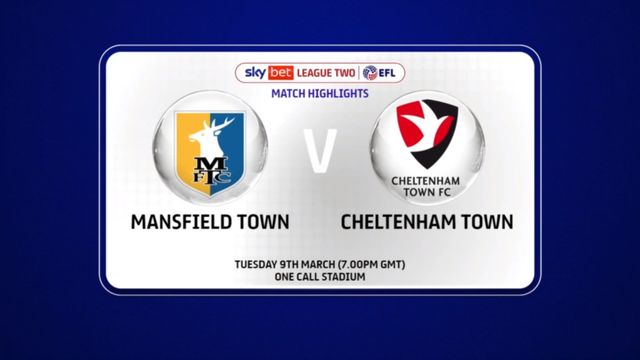 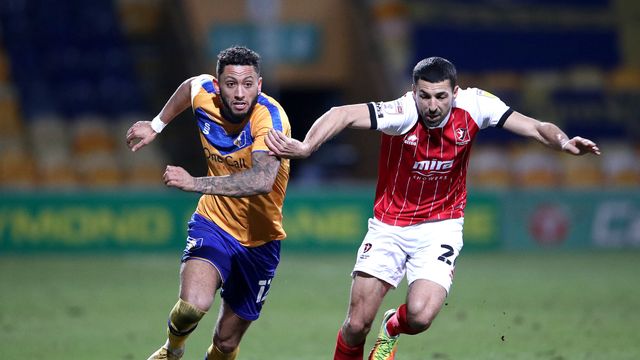