An enforced eight day break is over and Cheltenham Town will return to action at Harrogate Town on Tuesday evening (kick-off: 6pm).

A number of positive covid-19 cases recorded at the start of the month saw the Robins two matches last week against Barrow and Carlisle United suspended to be played later in the season.

So Tuesday's match at Harrogate Town, which has already been postponed once previously because of a frozen pitch, will see Michael Duff's men get back to their League Two commitments with a firm eye set on returning to the play-off places which they dropped out of following the results on the weekend.

Chris Hussey and Liam Sercombe make welcome returns from injury having recently been missing from action.

Midfielder Ellis Chapman is edging closer to fitness but won't be ready to be involved on Tuesday.

New loan signing Callum Wright is expected to be in the squad after he arrived on deadline day from Leicester City.

Back-to-back wins have pushed Harrogate up to 14th ahead of Tuesday's clash. Last season's National League play-off winners are enjoying their first season in the Football League under the management of long-serving boss Simon Weaver.

On Saturday they travelled to Crawley and picked up three points with a 3-1, win while prior to that they enjoyed a 2-1 home victory over promotion chasing Newport County AFC.

They have adapted their squad slightly during the January transfer window, while also sticking closely with many of the players who have played a part in their rise through the divisions. That includes goalkeeper James Belshaw who occupies the number one spot in North Yorkshire.

Defensively they'll be missing Will Smith after he was sent off on the weekend, but despite that will be able to turn to the likes of former Manchester City youngster Ed Francis, the experienced Warren Burrell and 27-year-old Connor Hall.

Their midfield options again carry a familiar theme of players who have provided plenty of service. Captain Josh Falkingham and George Thomson are reliable characters, while the likes of Lloyd Kerry and Brendan Kiernan offer creativity, as does Rangers loanee Josh McPake.

January saw them significantly bolster their forward options. Aaron Martin and Jack Muldoon remain having been part of their promotion squad, though Josh Andrews has landed on loan from Championship Birmingham City and Josh March has joined temporarily from league rivals Forest Green.

Initially appointed player manager in May 2009, Simon Weaver has led Harrogate Town to two promotions from the National League North to the EFL.

He is the son of the chairman and they have formed a strong leadership at the top of the club. He is one of the longest serving managers in English football.

His successful managerial stint comes at the end of a playing career that saw him represent the likes of Lincoln City, Nuneaton Borough, Kidderminster Harriers and Scarborough after beginning his career with Sheffield Wednesday. 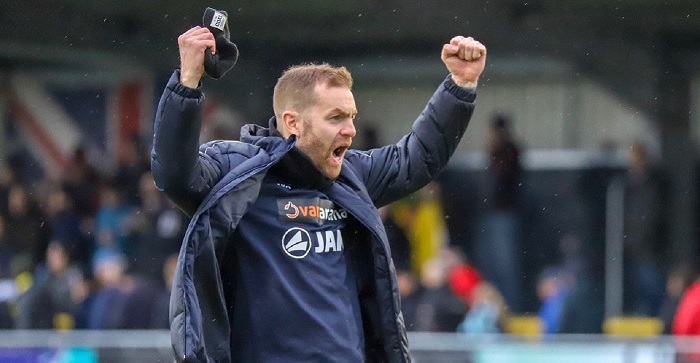 Jack Muldoon has successfully transferred his goal scoring success in the National League last season to League Two. The 31-year-old has 11 goals to his name so far this term.

He was previously a part of the Lincoln City squad that gained promotion to the Football League as National League winners, while he's also represented the likes of AFC Fylde, FC Halifax Town and North Ferriby United.

He spent a short period playing in the Football League previously at Rochdale, but his career before that was mainly in the northern area of non-league, turning out for the likes of Alfreton Town, Stocksbridge Park Steels, Brigg Town and Glapwell. 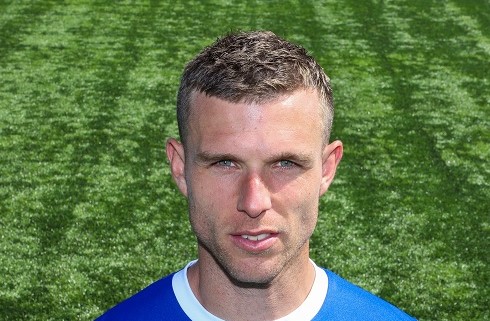 Enjoy full match access to the game by watching on iFollow. You can purchase a match pass to watch the game from home.

A match pass is available to buy online for £10 and you can watch through iFollow on the club website and on the EFL iFollow app on your smartphone. 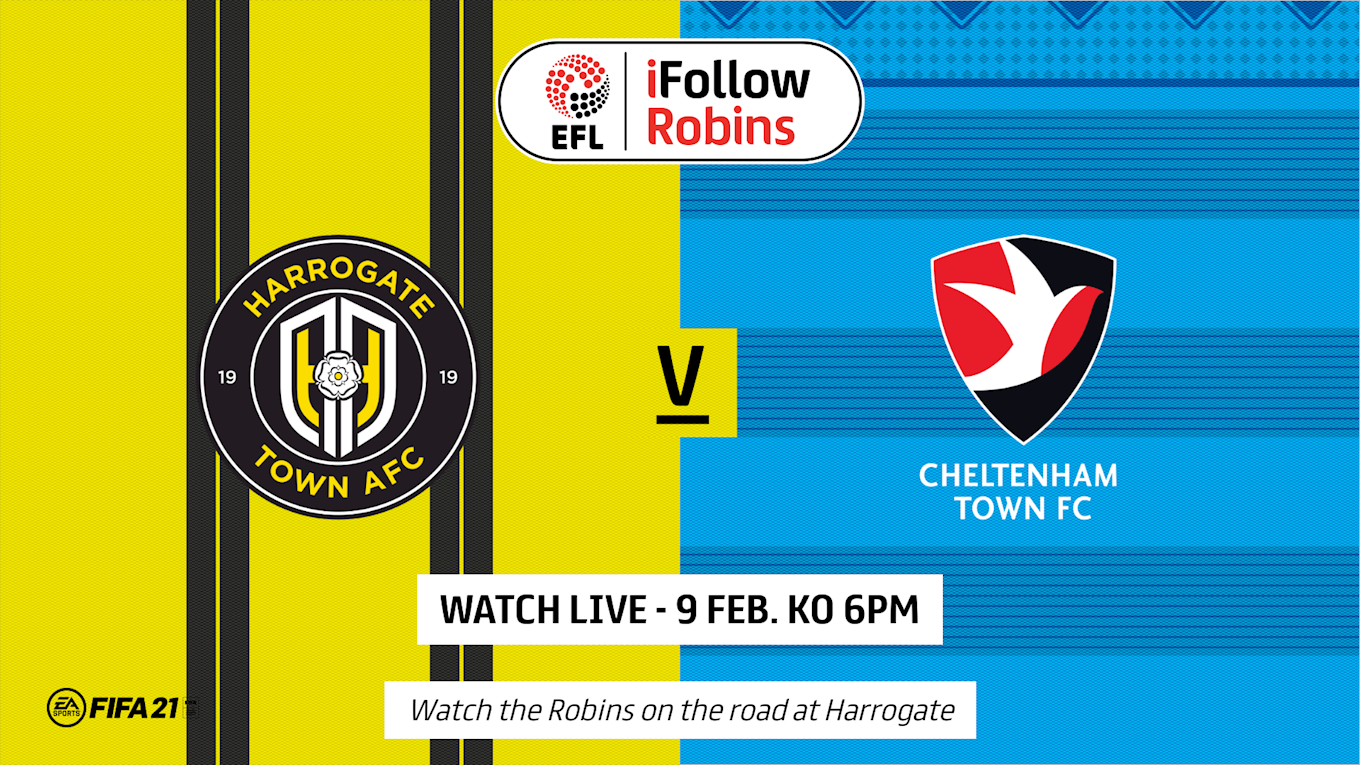 @CTFCofficial on Twitter is the place to go for team news, match updates and images from the game. Score updates will also be available on the CTFC Facebook page and Instagram.

After the game visit the club website to read a match report and also to watch Michael Duff's post-match press conference.

Extended highlights will be online to watch on iFollow. 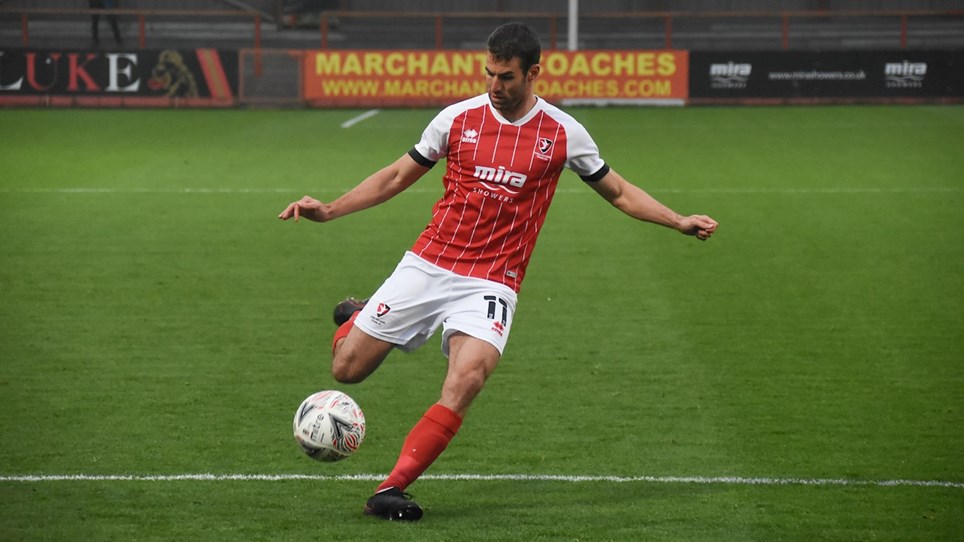 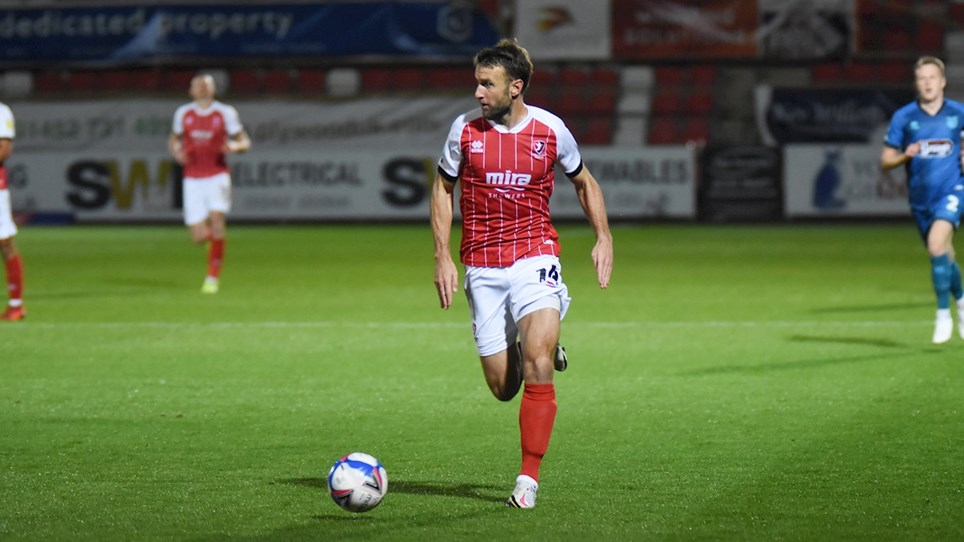 It wasn't one for the purists, not that Michael Duff and his staff will worry about that after losing a week of training to coronavirus.

This was more of a bar brawl in testing conditions but the Robins dug in here and deserved their win, a result that takes them from eighth position to third tonight.

Will Boyle's header settled it, two minutes before the break and the defender was arguably the game's outstanding performer, playing a central part in a third successive clean sheet.

It was a satisfactory night for the manager with promotion rivals Newport County and Tranmere Rovers both slipping up, plus the return of his key players from injury. 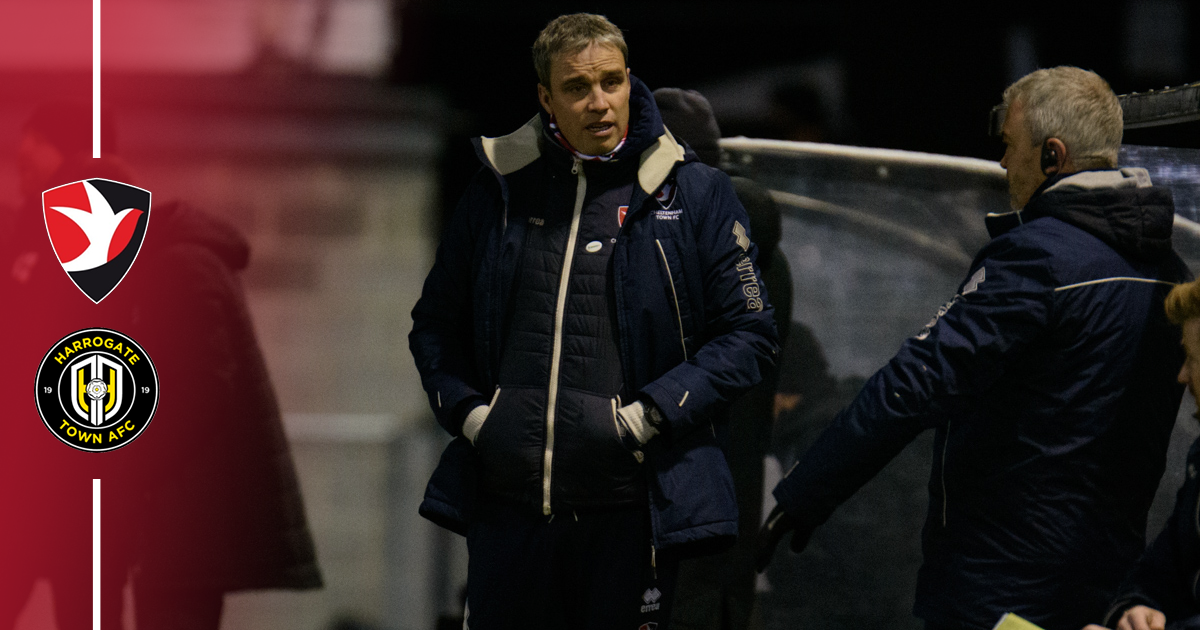 "It was a scrappy, ugly game," Duff said after the match.

"The pitch wasn't conducive to good football but in a game of few chances, we had them.

"The reason we put Sean Long in midfield so early on was bacause it was that type of game. It wasn't a case of getting the ball and playing through the thirds.

"You can't always play expansive football. They've come off the back of two good results so it was a hard fought away performance."

He made one change to his side, restoring Chris Hussey to his starting side on the left at the expense of Lewis Freestone. Meanwhile Callum Wright was named in the matchday squad for the first time since his arrival from Leicester City on deadline day but was an used substitute. 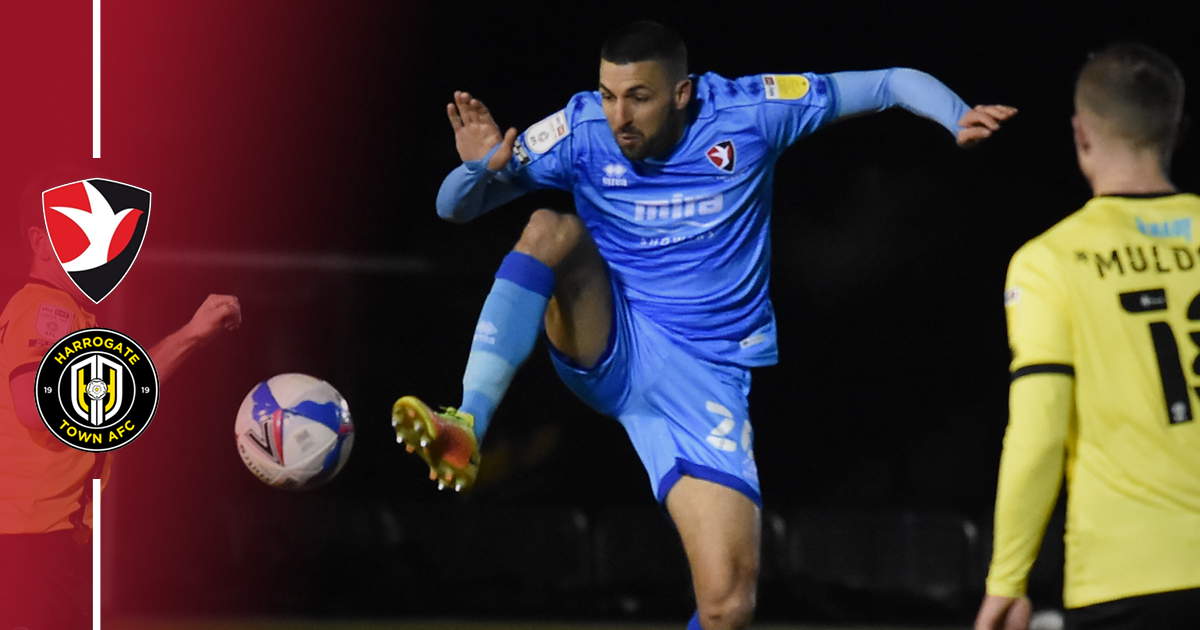 There was also the welcome return to action of Liam Sercombe, replacing Finn Azaz in the closing stages for his first appearance since the Colchester United match at Christmas.

The opening exchanges were pretty attritional and first chance of note arrived midway through the first half, a well worked move involving Charlie Raglan and Alfie May who teed up Andy Williams inside the box but the striker was denied by a goal line clearance by Jake Lawlor. May forced another low save 10 minutes later and should have scored with a third effort approaching half-time, racing on to a long ball only to blast over from a good position on the edge of the box.

There was an early setback when Chris Clements limped out of the contest, replaced by Sean Long in the midfield three.

But the goal arrived two minutes before the break and the substitute made it, winkling out a cross with the outside of his boot to find Boyle, who headed home his fifth goal of the campaign. 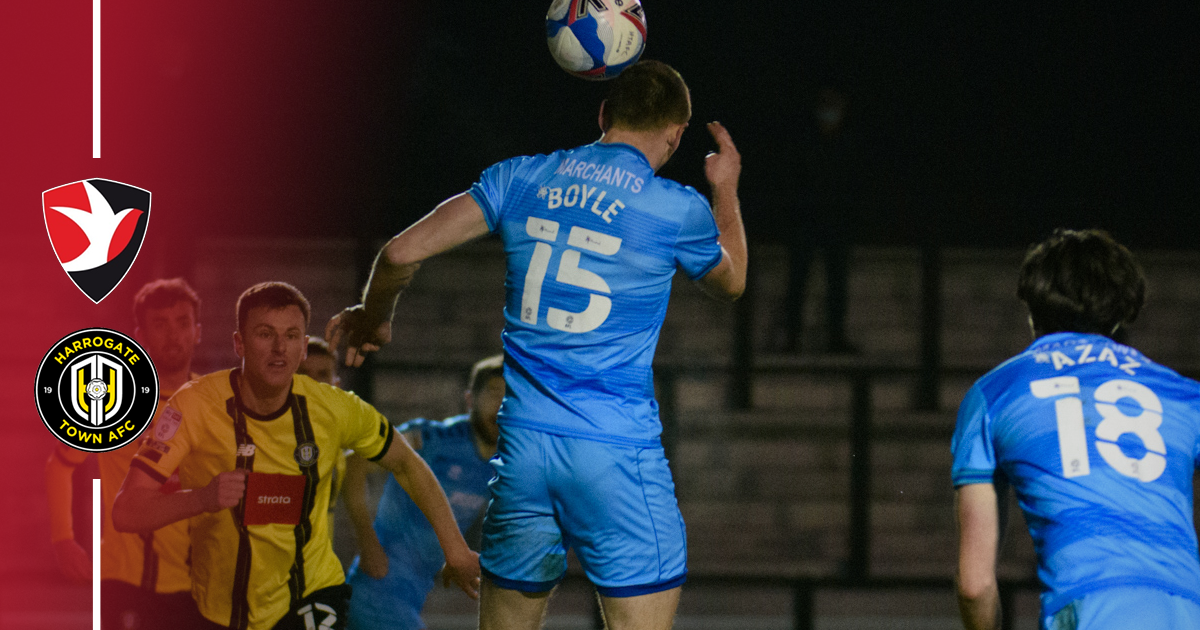 Josh Falkingham could have levelled things up on the stroke of half-time but he put his effort wide of the target.

The second half was low on chances, although the two number 10s traded chances in the opening 20 minutes. First Aaron Martin saw a header held by Josh Griffiths and then at the other end May hooked one wide of the target from 12 yards.

But the Robins restricted their hosts, who failed to test Griffiths over the course of the game to notch maximum points. 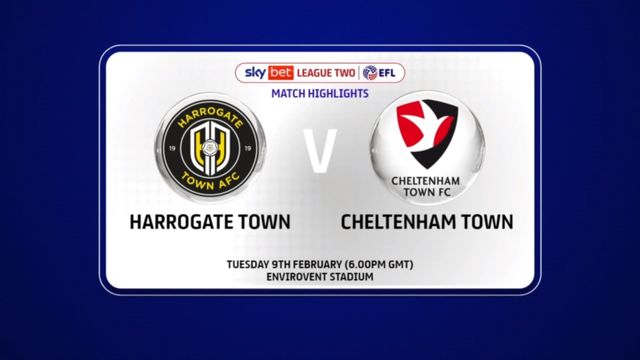 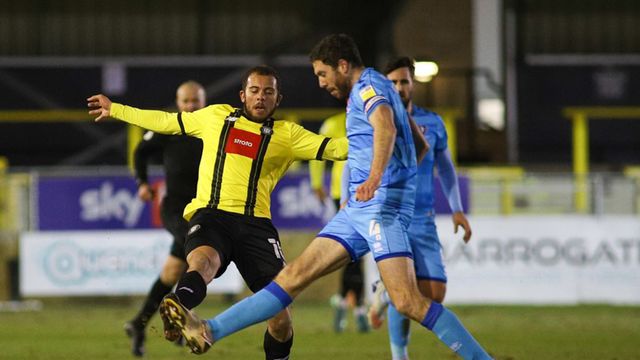