After nearly a month away it is back to action on home soil for Cheltenham Town on Saturday when Bradford City are the visitors (kick-off: 3pm).

Two teams in good form and on excellent runs go head-to-head. It promises to be a fantastic contest with the Robins looking to retain their place in the division's top three, and the Bantams targeting the continuation of their ever improving form following a January transfer window that's seen them bolster their attacking options.

Earlier in the season when the two teams met at the Utilita Stadium it was Cheltenham who came out on top. It was a tight match that night and Saturday's game is very much set up to be the same.

Watch the game online by purchasing an iFollow match pass which is available for £10.

Midfield trio Chris Clements, Liam Sercombe and Ellis Chapman will all miss the game because of injury.

A run between November and December that saw Bradford City lose five consecutive League Two matches condemned them to a place in the lower reaches of League Two. It sparked a change in leadership for the second half of the season and youth team coaches Mark Trueman and Conor Sellars have been in temporary charge since December.

They have played a significant part in improving the West Yorkshire team's fortunes and they go into Saturday's meeting having registered six victories in their last 10 League Two games. In that run they've only lost once to Exeter City and they also signed a number of players in the January transfer window to help aid their league campaign.

Of late Sam Hornby has been the man they've turned to in goal. Despite having the experienced Richard O'Donnell back and available former Port Vale stopper Hornby has been donning the gloves of late.

In their midfield ranks Scotsman Eliot Watt brings useful legs, as does Callum Cooke who signed back in the summer from Peterborough United.

Former Portsmouth man Gareth Evans brings important leadership while Jordan Stevens, who hails from Brockworth just outside of Cheltenham, is on loan to the club from Leeds United having spent the first part of the campaign on loan at League One Swindon Town.

In December 2020 Mark Trueman and Conor Sellars were appointed as caretaker managers at Bradford following the departure of former boss Stuart McCall.

Two young coaches who were working as part of the academy set-up in West Yorkshire, they have led the Bantams to improved performances at first team level and have continued to be offered the opportunity to represent them in League Two.

Trueman is a 34-year-old former midfielder who played non-league football for the likes of Harrogate Railway Athletic, Ossett Albion and Thackley until embarking on a coaching career that's seen him work at FC Halifax Town with their under-18s before moving into a similar role at Bradford.

Sellars, who is only 29, played also as a midfielder in non-league for the likes of Harrogate Town and Worksop, while he also played abroad at C.F. Fão in Portugal and Íþróttafélagið Höttur in Iceland. 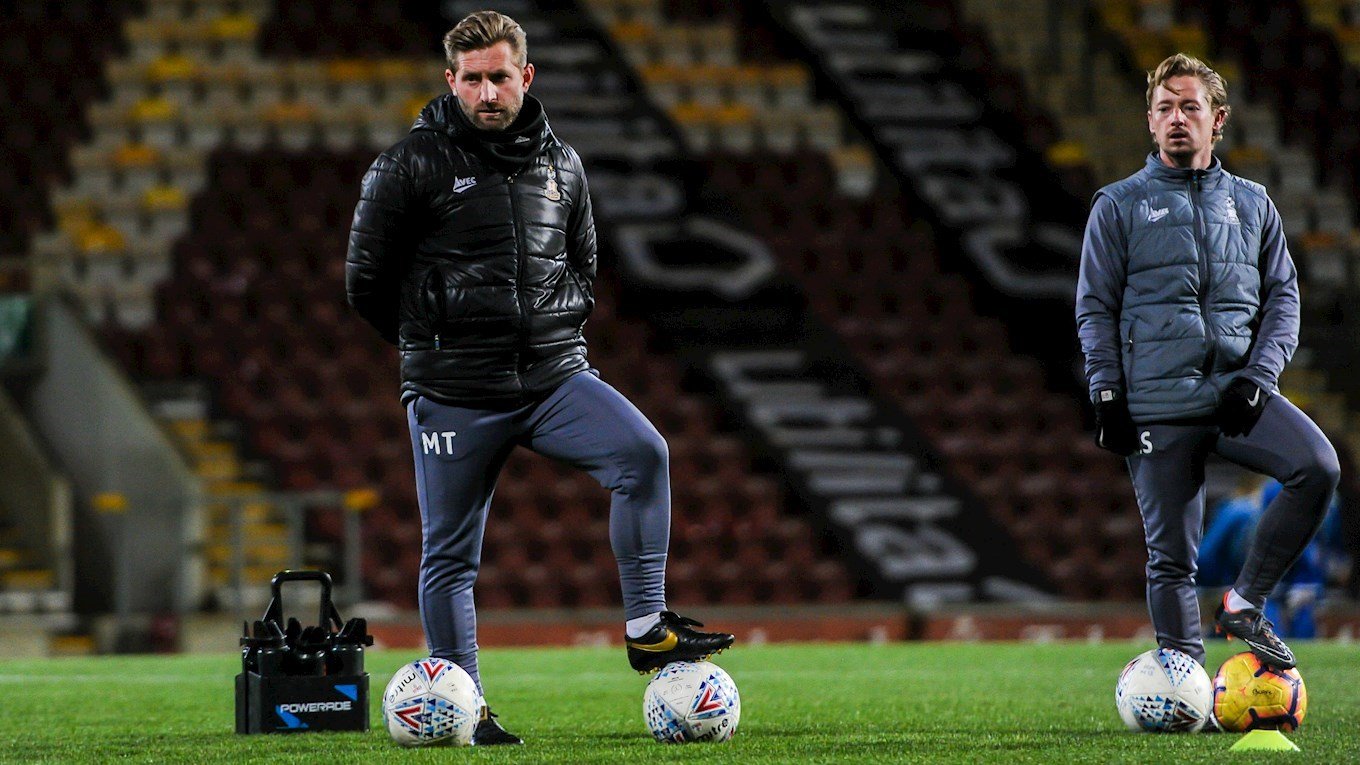 One to watch: Charles Vernam

Charles Vernam became a part of the Bradford City squad in January, joining the club from League One side Burton Albion.

The 24-year-old striker has made a good impression early on by scoring in his first two appearances, including the winning goal in the midweek victory over Morecambe.

He made his big break in the game in a spell with Grimsby Town having started his career at Derby County. 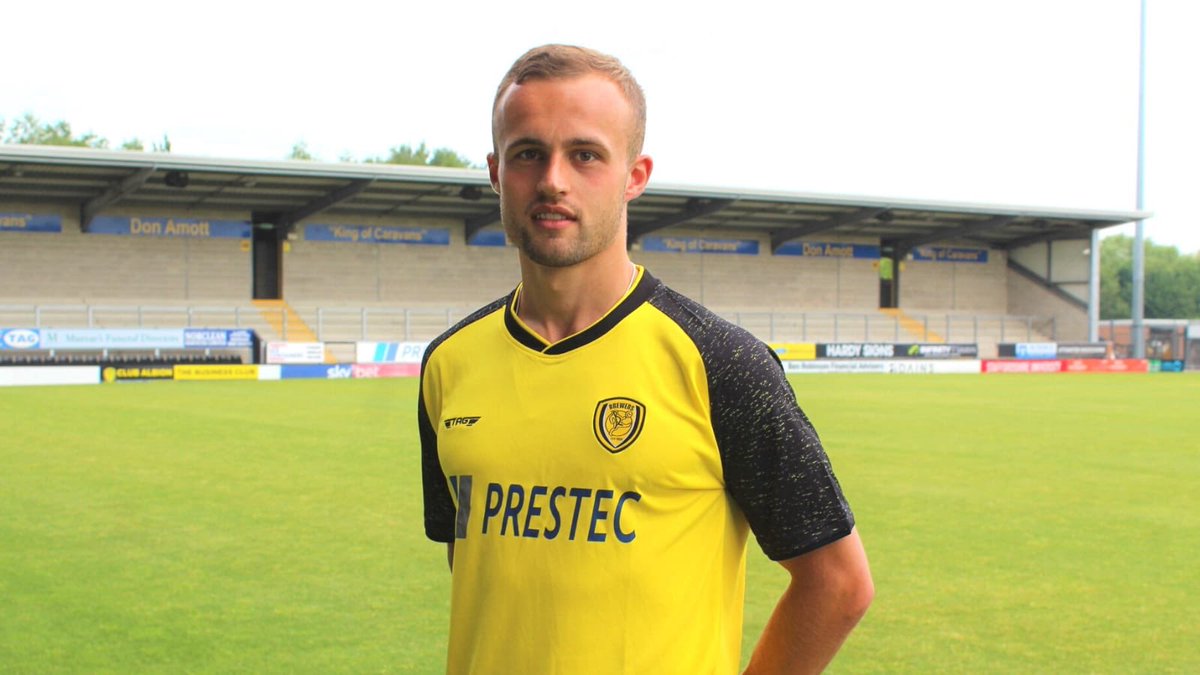 The match programme for the game is on sale from the club's online shop. It can be purchased as a 24 page print edition or a 48 page digital version.

Featured in the programme is a big interview with Sean Long as he reflects on getting back into the squad after injury and the role he'll be hoping to play in the second half of the season.

There's also an interview with Sam Smith after his first Cheltenham goal in midweek, under-18s boss Pete Haynes provides a detailed update on the club's scholars, Michael Duff looks ahead to the match, there's a review of the midweek League Two action, a detailed look at the day's opposition and much more.

The programme is available to buy in print online for £2.50 or can be downloaded at a cost of £2. 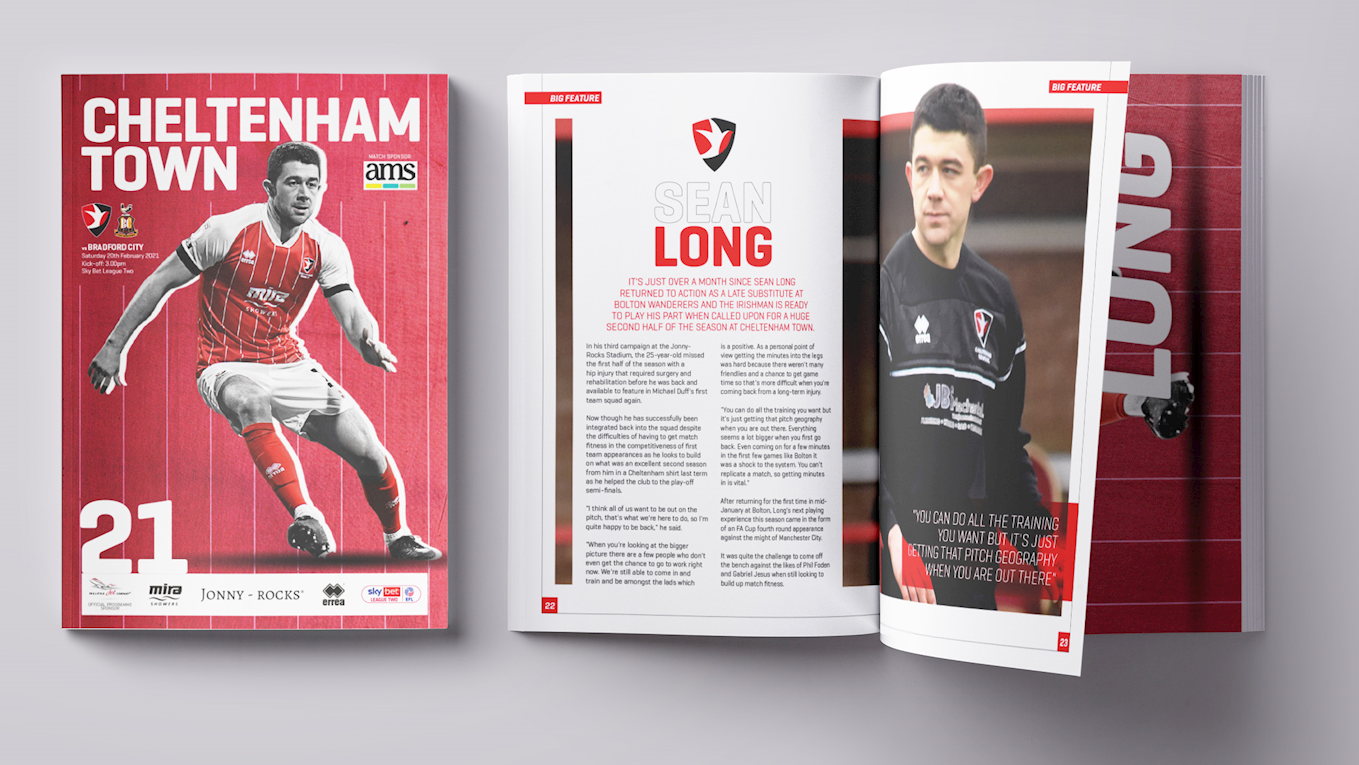 Purchase a match pass by subscribing online. It's priced at £10 and you can watch the game from the comfort of your own home. 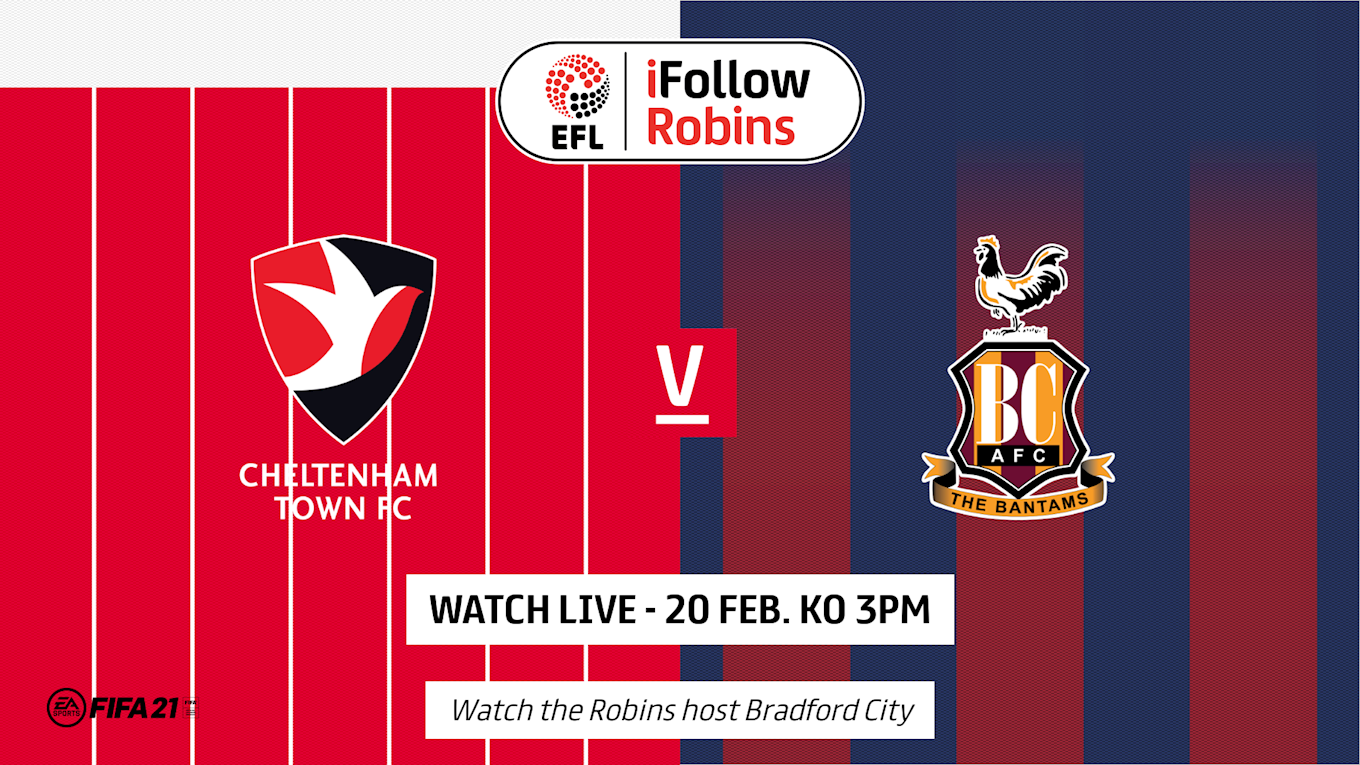 Staying up to date on the club's social media channels is the best way to keep up with the action on matchday.

Post-match visit the club website to read the match report and to hear from Michael Duff's post-game press conference.

You'll be able to watch extended highlights online on iFollow.

Cheltenham Town have suffered their first League Two defeat of 2021, as Bradford City ran out 2-0 winners at the Jonny-Rocks Stadium.

Andy Cook’s double either side of half-time condemned the Robins to their first home league defeat in over two months as Michael Duff’s side struggled for a reply.

The Bantams travelled to the Jonny-Rocks in a rich vein of form, despite enduring a tricky start to the League Two campaign.

A run between November and December that saw Bradford lose five consecutive League Two matches sparked a change in leadership for the second half of the season as youth team coaches Mark Trueman and Conor Sellars took interim charge at Valley Parade.

The two interim coaches had only lost once in the ten game’s they’d taken charge of since December, including six wins during that time. Trueman and Sellars took 21 points from 11 games before facing Cheltenham - an eight point improvement on the tally the team managed before their appointments two months ago.

Cheltenham had themselves taken all three points off Bradford in December through goals from Alfie May and Chris Clements, whose goals consolidated the club's place amongst the automatic places as the festive period loomed.

Midfielder Clements missed this afternoon’s reverse tie against Bradford through a hamstring injury, as Callum Wright made his first home start for the Robins following his goalscoring debut at Walsall on Tuesday night.

Duff was also forced to make changes to his defence as Lewis Freestone joined a back-three in replace of Will Boyle, who is facing a lengthy spell on the sidelines with a knee ligament injury.

It was Leicester City loanee Wright who struck the game’s first shot in anger, but after keeping four clean sheets in their last nine, Bradford were in no mood to let Cheltenham force an early advantage. With Chris Hussey’s wide free-kick cleared only as far as the edge of the box, Wright’s left-footed swipe was well blocked by Bradford’s defenders.

Inside the first ten minutes, both teams were still acclimatising to the windy conditions at the Jonny-Rocks, so when the first corner of the game was awarded to the away side, the Bantams made use of the testing gales.

Callum Cooke’s deep delivery hung over Josh Griffiths, who was unable to prevent Andy Cook from heading in at the far post to hand Bradford a breakthrough after only eleven minutes. Despite Cheltenham's gesticulations, referee Matthew Donohue didn’t spot a foul on the Robins goalkeeper.

Charlie Raglan and Ben Tozer are now Cheltenham Town's only League Two ever-presents this season, following the injury to fellow centre-half, Boyle. Raglan came close to levelling the scores when he connected with Hussey’s deep delivery towards Sam Hornby’s six-yard box in the 30th minute, but his wayward header was as close as the Robins would get to a first-half goal, as Bradford took their 1-0 lead into the break.

As the away side welcomed the half-time interval, Cheltenham’s growing momentum was stalled and after starting the second period like the first, Bradford punished the promotion chasers again.

Cook stole a march on Cheltenham’s defenders after taking a good touch to escape Raglan before rounding Griffiths and slotting into an empty net. His second goal of the game forced a Duff into making a triple substitution before the hour mark.

Indianna Vassilev and George Lloyd were both introduced to add some more firepower on the pitch, while Seàn Long replaced Finn Azaz in midfield.

Without a goal in three - after scoring against Manchester City and Oldham in successive starts - Alfie May came within inches of halving the hosts’ deficit after giving Paudie O’Connor the slip and firing wide of Hornby’s far post.

Bradford were able to soak up pressure and make use of some counter-attacking football throughout the second-half. After May squandered his best chance of the afternoon, Bradford’s Callum Cooke re-created his chance at the other end.

After registering both assists for Cook’s goals either side of half-time, Cooke nearly put the away side in cruise control when he steered his effort towards Griffiths’ far post, but narrowly missed the target.

Cheltenham will travel to the Abbey Stadium on Tuesday night to contest a battle between fellow promotion chasers Cambridge United (kick off 19:00). 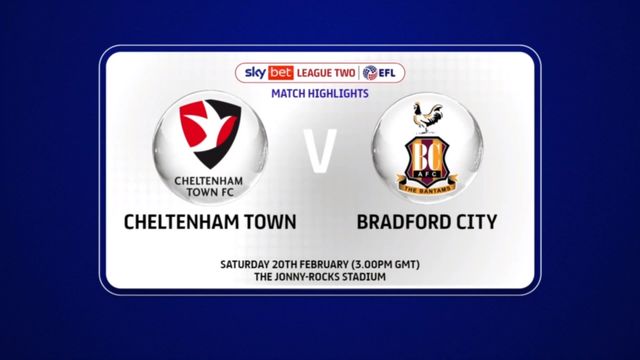 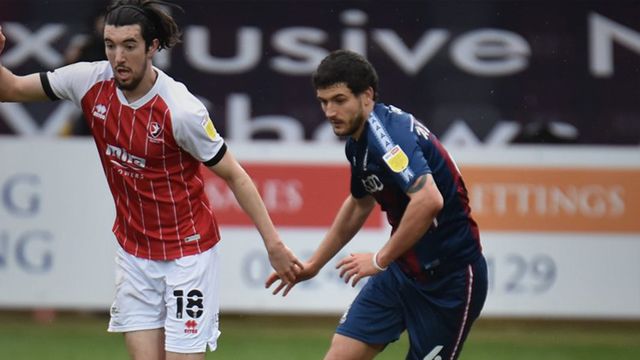