Saturday's encounter will be the first Football League meeting between the two clubs who have come head-to-head in non-league circles previously.

With the frustration of a late defeat to Bolton Wanderers on Tuesday still in the memory, Saturday's game at the Progression Solicitors Stadium is a chance to put things right ahead of the Boxing Day home fixture at the Jonny-Rocks Stadium against a managerless Barrow side.

Only Sean Long and Conor Thomas remain definitely out of action, though both are making good progress at the training ground.

Chris Clements is closer to a return and could be in the squad against a club he spent time on loan with at the beginning of the 2017/18 season.

See what Michael Duff had to say before the game, while midfield man Liam Sercombe has also been previewing the trip to Cumbria.

Earlier this week Barrow parted company with manager David Dunn. The former Blackburn Rovers and Birmingham City midfielder only took over in the summer, but with the Bluebirds occupying a lowly position in League Two they've taken the decision to go down a new path.

In the meantime Rob Kelly, who was Dunn's number two, is in caretaker charge as they look to appoint Dunn's successor.

Up until 1972 Barrow had been regular members of the Football League since the 1920s. But after nearly half a century in the non-league game they made a return to this level for the start of this season after a fantastic campaign last season saw them win the shortened campaign National League title.

It's taken them time to get going, picking up plenty of draws early on. The inability to turn those draws into three points though has cost them. They've only won twice in the campaign and they were back-to-back wins in the same week at the end of October. Heading into Saturday they've lost their last five League Two matches.

Team wise Joel Dixon is their man to look towards in goal. The former Sunderland youngster has been at Barrow since 2015.

In defence the experienced Sam Hird, a former teammate of Charlie Raglan's at Chesterfield, offers leadership, while 20-year-old Scott Wilson came through the youth system at Burnley working under Michael Duff.

Jason Taylor will be a familiar face for Robins fans in their midfield. He joined Cheltenham in 2013 and then left in a loan move to Northampton in January 2015.

Leading their line Scott Quigley is still hoping to bring the goal scoring touch he had in their National League season last year to their League Two commitments. He's netted twice in 13 games so far.

Luke James is an experienced forward who can name Hartlepool and Peterborough United among his former employers. Youngster Jayden Reid is on loan from Championship Birmingham City, while Harrison Biggins is another loanee who could feature. He's on loan from Fleetwood Town.

A highly experienced coach, Rob Kelly is in caretaker charge having been number two to the recently departed David Dunn.

The 55-year-old was appointed in September having returned to English football following a spell as assistant manager at German second tier side Fortuna Düsseldorf where he had worked alongside Uwe Rosler.

Kelly started his management career with a year in charge of Leicester City between 2006 and 2007, but from then on he's worked as part of a backroom staff, filling in as a caretaker manager on a number of occasions at a range of different clubs.

He's also worked as a first team coach or assistant at the likes of Blackburn Rovers, Fleetwood Town, Bury and in Sweden with Malmö FF where again he was number two to Uwe Rosler. 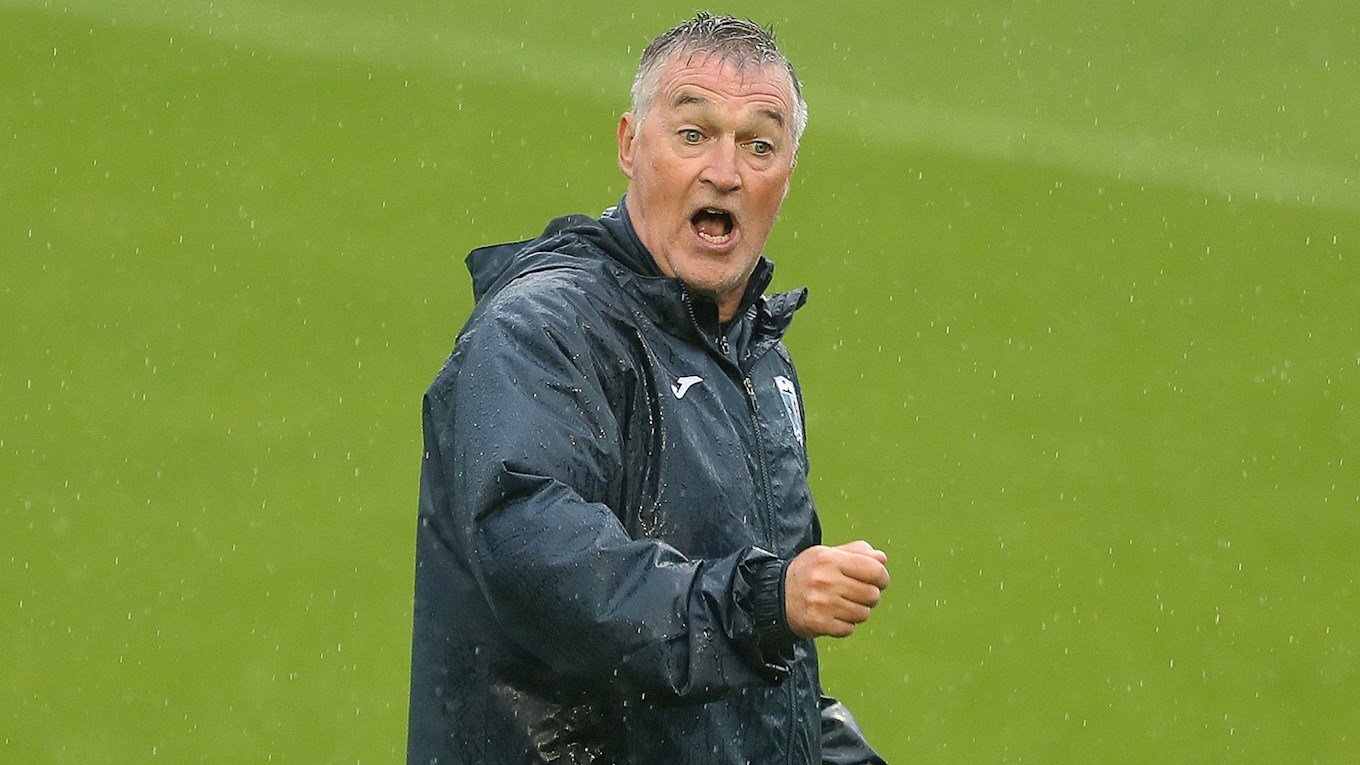 One to watch: Dior Angus

Midlands based forward Dior Angus joined Barrow initially on loan in 2019 from Port Vale, but after a successful spell it turned into a permanent stint and he helped them gain promotion to League Two last season.

Up until 2018 when he signed for Vale he'd spent his time playing non-league football around the Midlands, starting at Solihull Moors, and then briefly with Kidderminster Harriers.

Spells at Daventry Town and Stratford Town were followed by a transfer to Redditch United where his goal scoring exploits caught the eye of Port Vale who offered him an opportunity in League football for the first time.

This season he's netted five times in all competitions and has made 21 appearances. 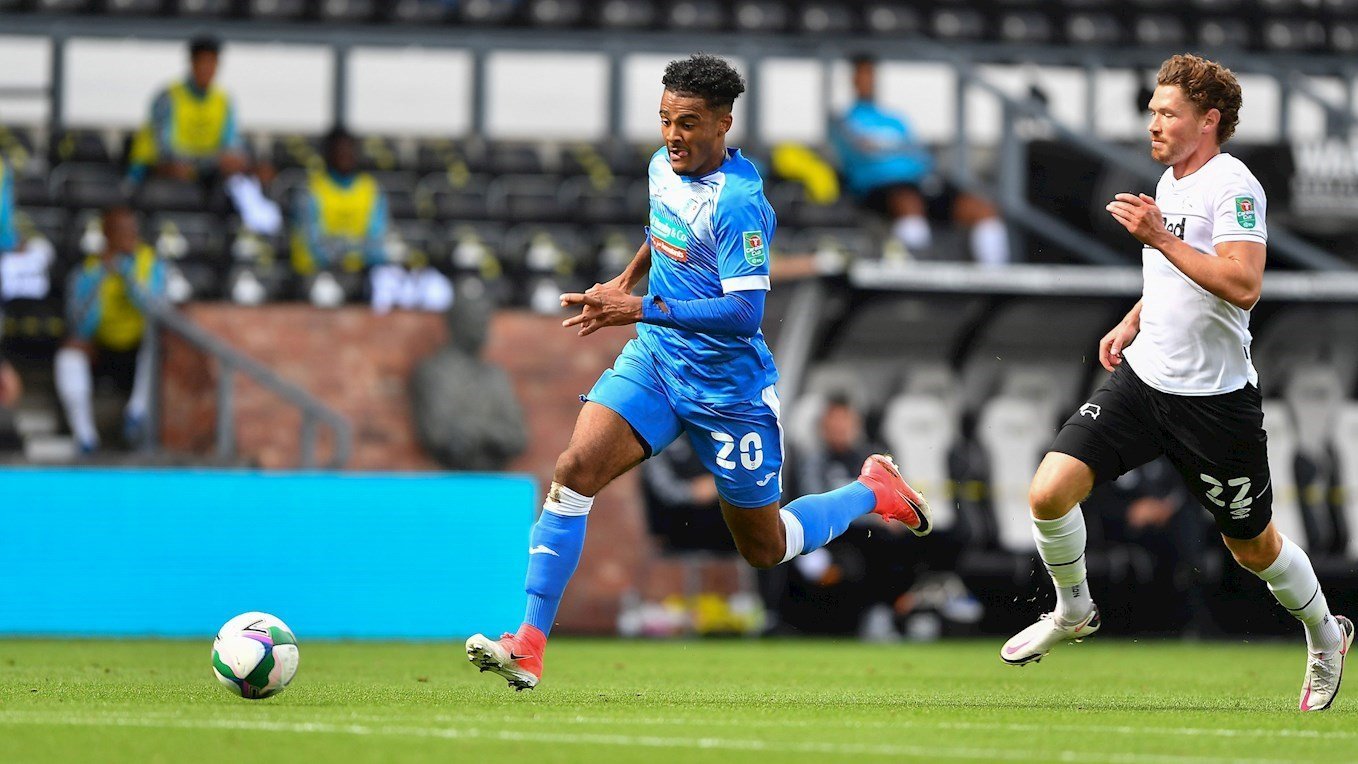 You can catch the whole 90 minutes of action by purchasing a match pass and watching the game on iFollow.

A match pass is available to buy for £10 online. Subscribe before the game to view the action. 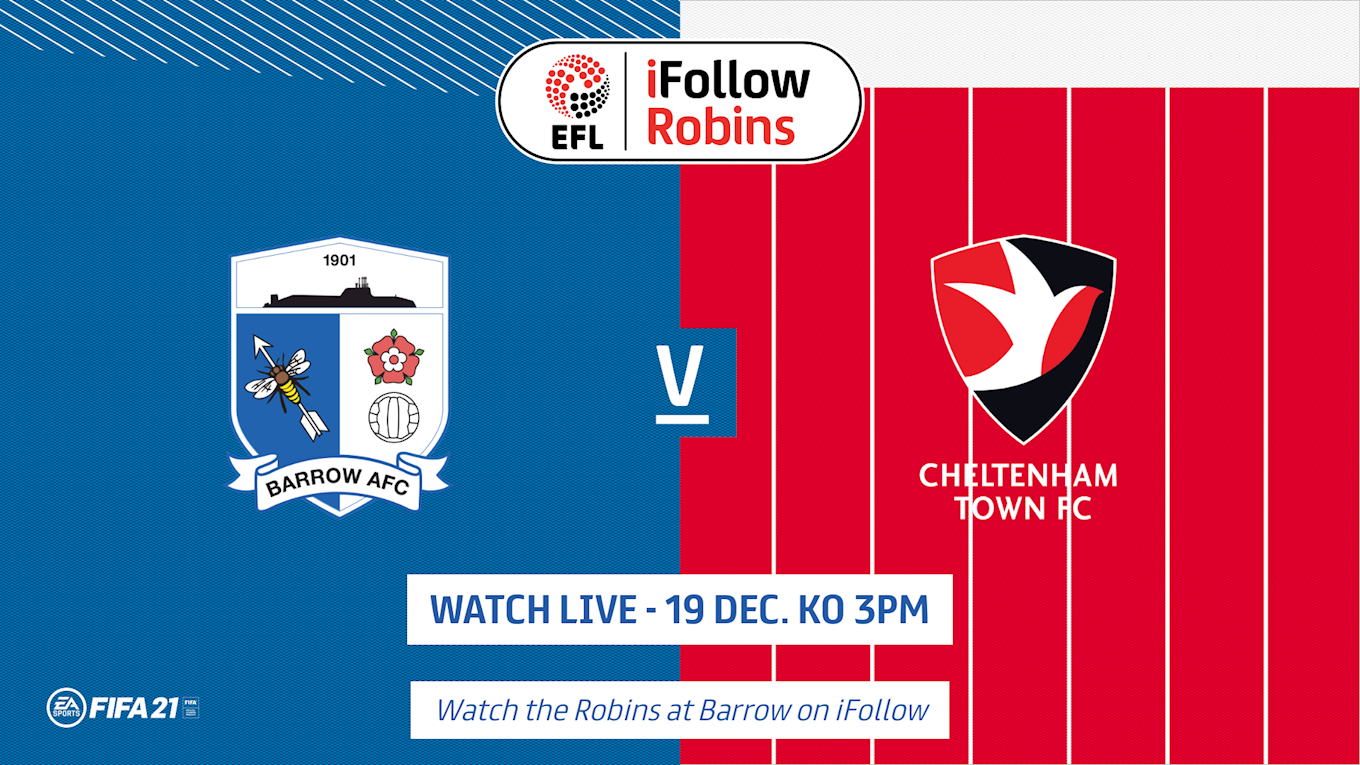 The club website post-match will have a report looking back on events, while you'll also be able to see reaction from Michael Duff to the final score.

Watch extended highlights from Cumbria exclusively on iFollow after the match.

Cheltenham Town produced their worst performance of the season to taste defeat on a frustrating afternoon at the Progression Solicitors Stadium.

Quite simply they were second best from start to finish, failing to find a goal for the third match in succession.

True the conditions were boggy but they just couldn't find their rhythm and looked uncharacteristically disjointed, creating only one real chance of note.

It resulted in their heaviest reverse for over 18 months.

On the other hand Barrow, backed by a partisan crowd of almost 1,400 noisy supporters, were well drilled and adapted better to the occasion to secure a much deserved victory.

This was the first league meeting between the pair, and the first time that the Robins had faced a crowd on their travels since February. 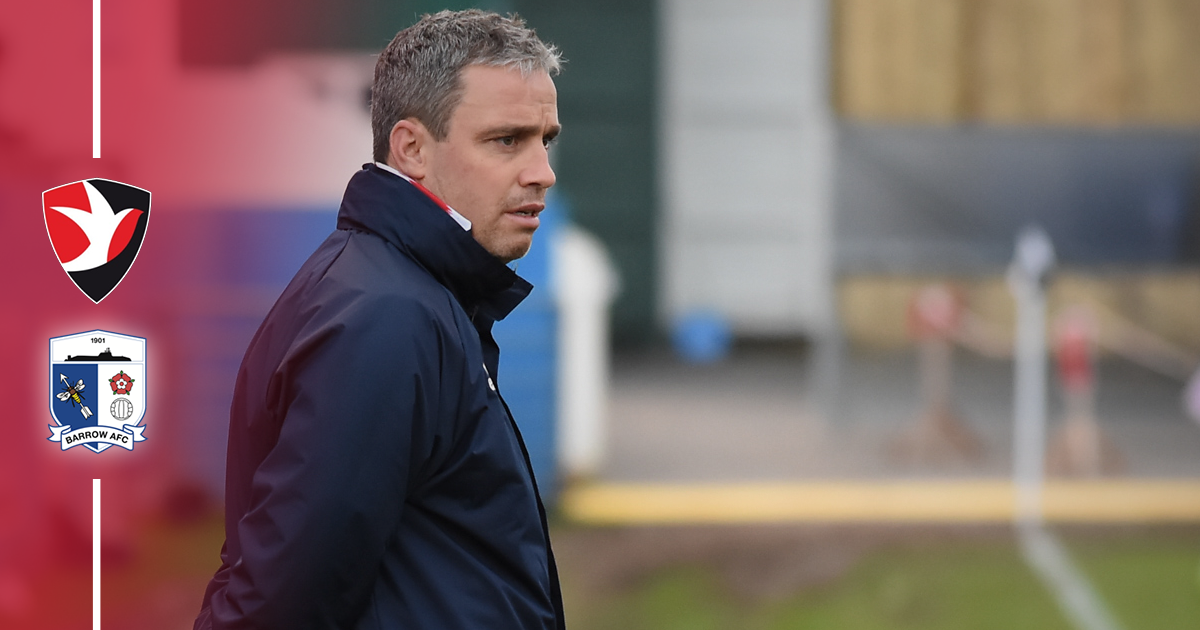 Boss Michael Duff had no complaints after the match.

"I thought they were better than us, and we got what we deserved.

"No complaints at all. It tells you everything that we made three subs at half-time to try and get a reaction and it didn't happen.

"We completely lost our discipline in the second half which is unlike us.

"For the first time this season we've been beaten by a better team."

Duff made three changes to the side that was beaten by Bolton Wanderers in injury time on Tuesday night. The midfield had a different look to it with Tom Sang and Chris Clements handed starts at the expense of Finn Azaz and Ellis Chapman. George Lloyd joined them on the bench, replaced by Andy Williams. Goalkeeper Max Harris was also named among the substitutes with Scott Flinders missing. 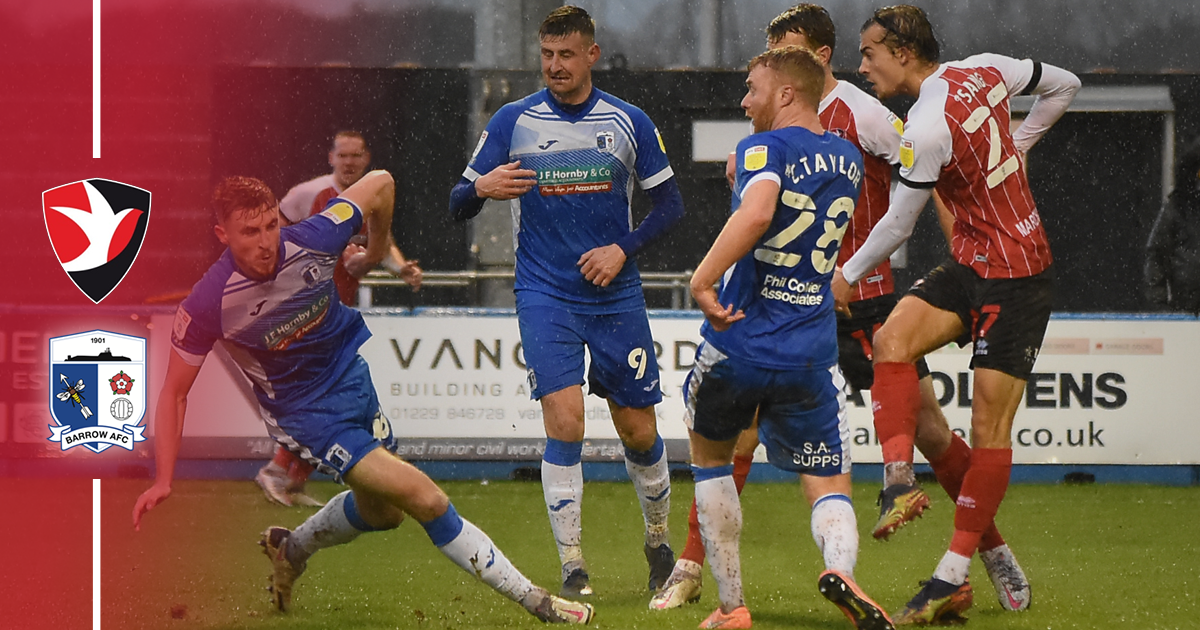 Barrow had lost five on the bounce coming into this one and the Robins started promisingly enough, Sang with a blocked shot and Williams missing with a header from a great position after he was found with a fine ball by Chris Hussey. That though amounted to their attacking threat for the remainder of the contest.

Moments later the home side found their stride and Josh Griffiths was forced into a pair of fine saves to prevent Tom Beadling, with a free-kick, and Scott Quigley from 12 yards.

Then Quigley wasted a great chance on the counter attack, shooting over from the edge of the box with attacking options either side of him.

But the striker made the breakthrough two minutes before the break, making no mistake from the spot after he was brought down by Liam Sercombe in the box.

It looked a harsh decision but on the balance of play it was no more than Barrow deserved.

It resulted in Duff making three changes at the break. Clements, Sang and May were all withdrawn and replaced by the players that lost their place from Tuesday's game while Reuben Reid was introduced 12 minutes later in place of Williams.

But the replacements failed to make an impression and Barrow went on to double their advantage through James, Barrow's stand out player on the day. The former Forest Green man had initially forced Griffiths into another decent stop but he quickly followed up with a brilliant chip to make it two.

Harrison Biggins added the third with 17 minutes remaining after Griffiths – who was easily Cheltenham's best player – had pulled off another fine save to deny James, but he seized the loose ball to bundle home and compound the misery. 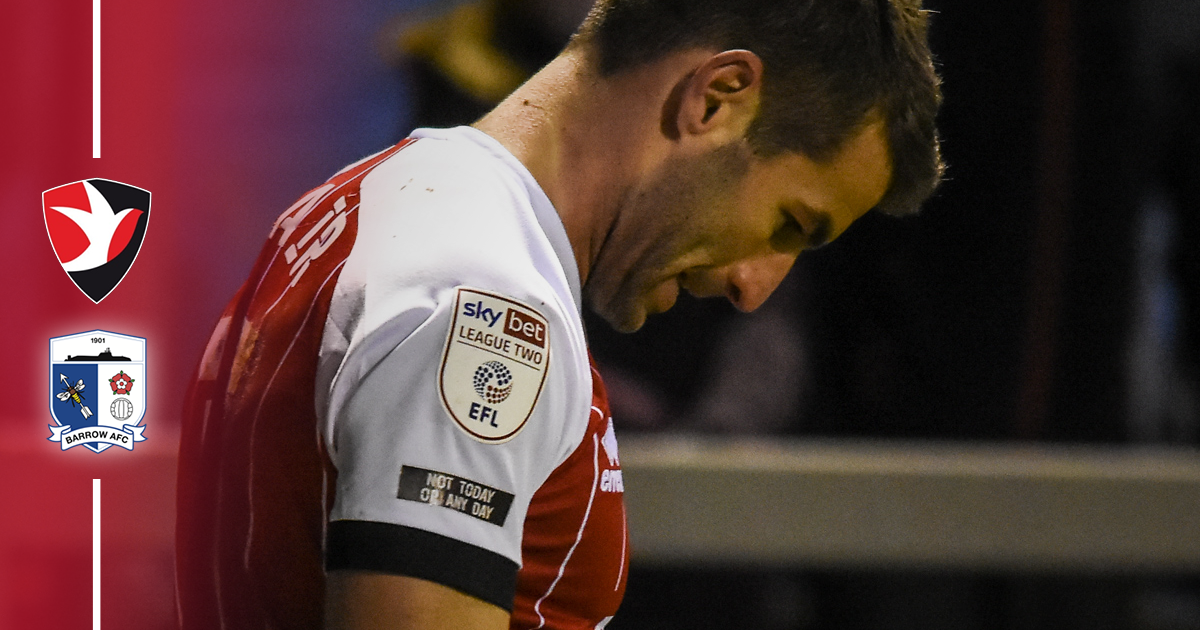 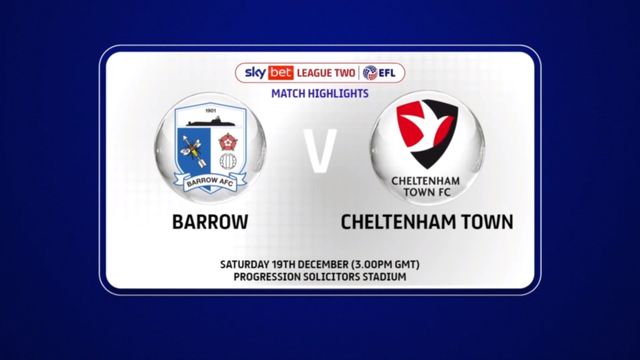 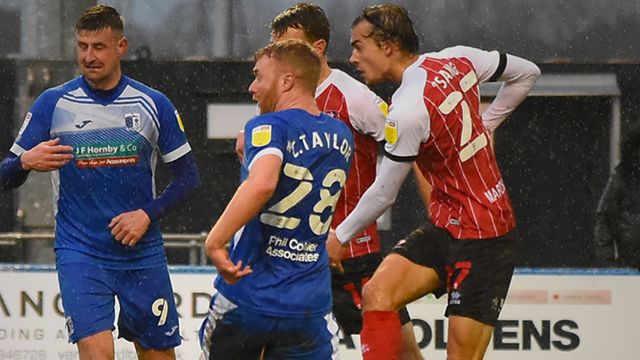