It's a Cheltenham Town first on Saturday as the Robins head north to take on Football League new boys Salford City (kick-off: 3pm).

Last year's National League play-off winners are looking to make their mark on League football for the first time.

Backed by the might of the Manchester United legends that include Gary and Phil Neville, Nicky Butt, Paul Scholes, Ryan Giggs and David Beckham, as well as billionare Peter Lim, Salford have captured plenty of attention as they've risen through the divisions.

Full focus though is on matters on the pitch however for Michael Duff and his side who are looking to follow up last Saturday's fantastic 4-2 home win over Stevenage with a much sought after positive result away from home.

Cheltenham fans are advised that due to the Tour of Britain that's going through Salford on Saturday, as well as a home fixture for Manchester United at Old Trafford, there will be travel disruption on Saturday so it's recommended supporters leave plenty of time to travel.

After winning the Autovillage Player of the Month for August, Jake Doyle-Hayes is back in contention following his spell away with the Republic of Ireland under-21s squad.

Fellow midfield loanee Max Sheaf is edging closer to fitness, however Reuben Reid, Rohan Ince, Josh Debayo and Will Boyle are definitely out through injury.

With four promotions in their last five seasons, Salford have made headlines in English football under their leadership set-up of the Class of 92 and Singaporean business magnate Peter Lim, who owns not only Salford but also La Liga side Valencia.

In their first season in League Two they currently occupy 15th spot from their first seven matches. It has been a steady start for manager Graham Alexander's side. They've lost just once, won only once, but drawn five times in League Two so far. In fact they head into Saturday's contest on the back of five consecutive league draws.

That most recent draw was at Morecambe a week ago where they missed two penalties, including one at the death, while they did earn a win in the Leasing.com Trophy against Aston Villa's under-23s at the beginning of the month.

They've kept faith with many of the players who have helped them reach the fourth tier including dangerous midfield man Danny Lloyd, powerhouse Lois Maynard and centre back Carl Piergianni.

Forward Adam Rooney brings well known quality, as does Gibraltar international Scott Wiseman, while they've recently bolstered their ranks with the signings of Jake Jervis on loan from Luton and defender Jack Baldwin from League One Sunderland.

Boss Graham Alexander guided them to promotion last season via a promotion final win at Wembley against AFC Fylde. The former Scunthorpe United and Fleetwood manager played with Michael Duff at Burnley, and also enjoyed spells at Preston North End and Luton Town during his playing days.

Table toppers Exeter City will be aiming to maintain their fine start on Saturday when they host Leyton Orient at St James Park. Bottom of the pile Scunthorpe will however be desperate to get their campaign going. They are at home to Morecambe.

The full schedule for Saturday is available below:

Ticket sales have now closed at Cheltenham but they can still be purchased on the day at Salford.

Fans booked on the Travel Club coach are reminded that it leaves at 10am.

Keep a track of goings on at the Peninsula Stadium by following @CTFCofficial on Twitter. You can also check out the club's Facebook page for goal and team news updates.

After the match visit the club website to read a match report and to see reaction from inside the camp.

Ryan Broom was at the double to help Cheltenham Town to their first away League Two win of the season.

The Welshman followed up his fantastic performance in last week's win over Stevenage to help the Robins to an assured win at division new boys Salford City.

A goal in either half was enough for Michael Duff's men, who also kept a clean sheet on their first ever visit to the Peninsula Stadium.

A lively opening saw both teams come close. Lois Maynard almost flicked in a Jake Jervis free kick for the hosts, while Luke Varney stung the gloves of Kyle Letheren with a low shot that led to a corner where Charlie Raglan's volley from 18 yards was blocked.

Scott Flinders was called upon to stop Devante Rodney's long-range header from a Jack Baldwin diagonal ball from dropping in ahead of a break in play that saw Salford's Richie Towell forced off with an injury that required lengthy treatment.

The much sought after away goal Cheltenham were after came just past the half hour mark. 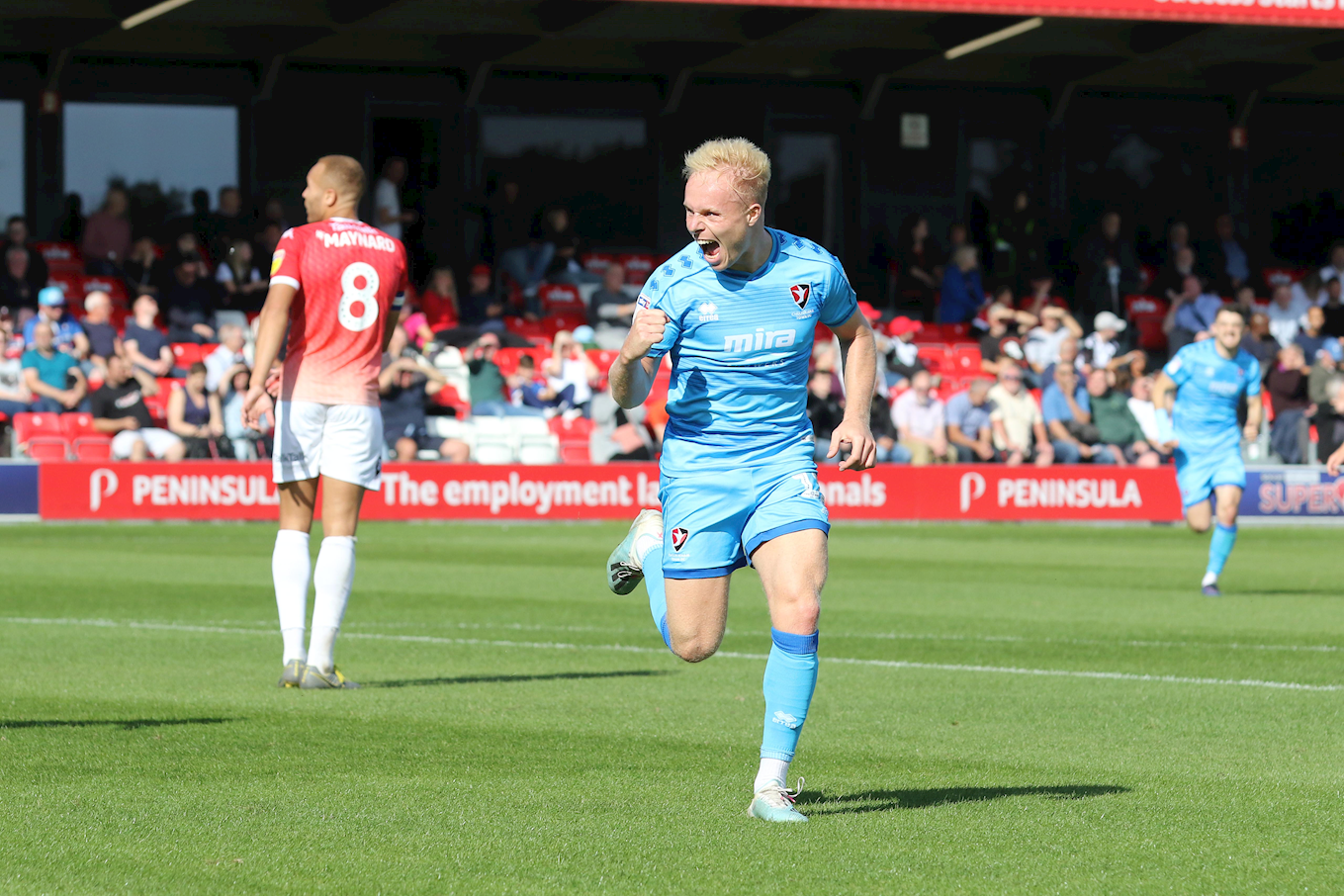 Conor Thomas did brilliantly to charge the ball down high up the pitch and feed the ball into Varney, who set himself and then Broom, to take a touch and then finish left-footed.

Broom came close to doubling his and the Robins tally early in the second half after Gavin Reilly had done well.

Rodney meanwhile tried his luck for the hosts with a low shot that Flinders grasped to his right.

The hosts struggled to create chances as they looked to find a way back into the game. A long Dan Jones throw on 72 minutes did fall the way of Jake Beesley but the attacker couldn't find a way through.

Cheltenham were doing enough to deny Salford a glimpse on goal, and their solidity was rewarded when the second goal came into the final ten minutes.

Sean Long's cushioned header into the path of substitute Alex Addai saw the attacker wiggle his way through, and he produced a sublime reverse pass to set Broom clear, and he rolled the ball under Letheren superbly to earn a fine three points on the road.

Tickets and away travel for Cheltenham Town's first ever visit to Salford City's Peninsula Stadium are on sale from the ticket office.

The Robins head north to the League Two newcomers on Saturday 14 September for a 3pm kick-off.

Prices apply to both seating and standing with no increase on the day.

The Travel Club coach departs from the Jonny-Rocks Stadium at 10am.

The ticket office is open on a Tuesday, Thursday and Friday between 10am and 3pm. It is also open before kick-off for Saturday's home game with Stevenage.