Cheltenham Town will be looking to equal a five straight Football League winning run last achieved back in the 2011/12 season on Saturday.

Standing in the Robins way though is just one of two teams above the side in the League Two table after ten matches.

Crewe Alexandra have enjoyed a great start to the season and visit the Jonny-Rocks Stadium on Saturday as the division's best team away from home.

This weekend's contest is all set up to be a lively encounter between the second and third placed teams in League Two.

Tickets are available to buy on the turnstiles and online.

Rohan Ince has returned to full training and is working towards match fitness. Will Boyle is back in full training too and is likely to be in the matchday squad.

Luke Varney and Chris Clements could be set to play against their former clubs, however Reuben Reid, Josh Debayo, Max Sheaf are ruled out through injury. Tahvon Campbell is likely to be fit to be involved.

With back-to-back wins over two teams promoted to League Two last season from the National League, in Leyton Orient and Salford City, Crewe travel to Gloucestershire on Saturday second in the division having enjoyed a superb start to the campaign.

Managed by former player David Artell (pictured), who has been in charge since January 2017, they're looking to build on their bright start having secured a 12th place finish in League Two at the end of last season.

A talented young squad has been constructed from their highly thought of academy system, but it has also benefited from the experience of a small handful of knowledgable pros who have enjoyed careers further up the pyramid.

One of those many academy starlets, Tom Lowery, netted twice last weekend and has four goals this term. The midfielder will have to be watched over, while the width and drive provided by the likes of Charlie Kirk will be a persistent threat.

James Jones and Owen Dale are other academy products who have the ability to make an impact.

Their youthfulness is a massive attribute, but older heads such as Nicky Hunt, striker Chris Porter and ex-Swindon Town man Olly Lancashire are key. Republic of Ireland international Paul Green is another talented professional, however he is unlikely to feature due to suspension.

A fan zone will be welcoming both Robins and Crewe supporters in the car park outside the ticket office before the game.

The Community Trust will have their Speed Gun in operation for supporters to try their luck on, while there will be a Teqball table in position too for fans to have a go on.

There will be pork rolls on sale as well as a mini bar for drinks. Whaddney the mascot will also be around the fan zone too.

The ticket office is open before the match selling tickets for upcoming home fixtures and the away match at Oldham Athletic on Saturday 5 October.

They are available on the turnstiles and can be bought online in advance.

You can also visit the club shop before the match to buy CTFC merchandise.

Saturday's edition of the matchday programme features Chris Clements as the big interview. The midfielder discusses what it is that makes Crewe's youth system so successful, having come through the set-up himself, and what it was like working with current England assistant manager Steve Holland with the Railwaymen.

You can also hear from the chairman, boss Michael Duff, take a look back at the club's history on this day, find out plenty about the opposition and much more.

The programme will be on sale around the stadium for £3. 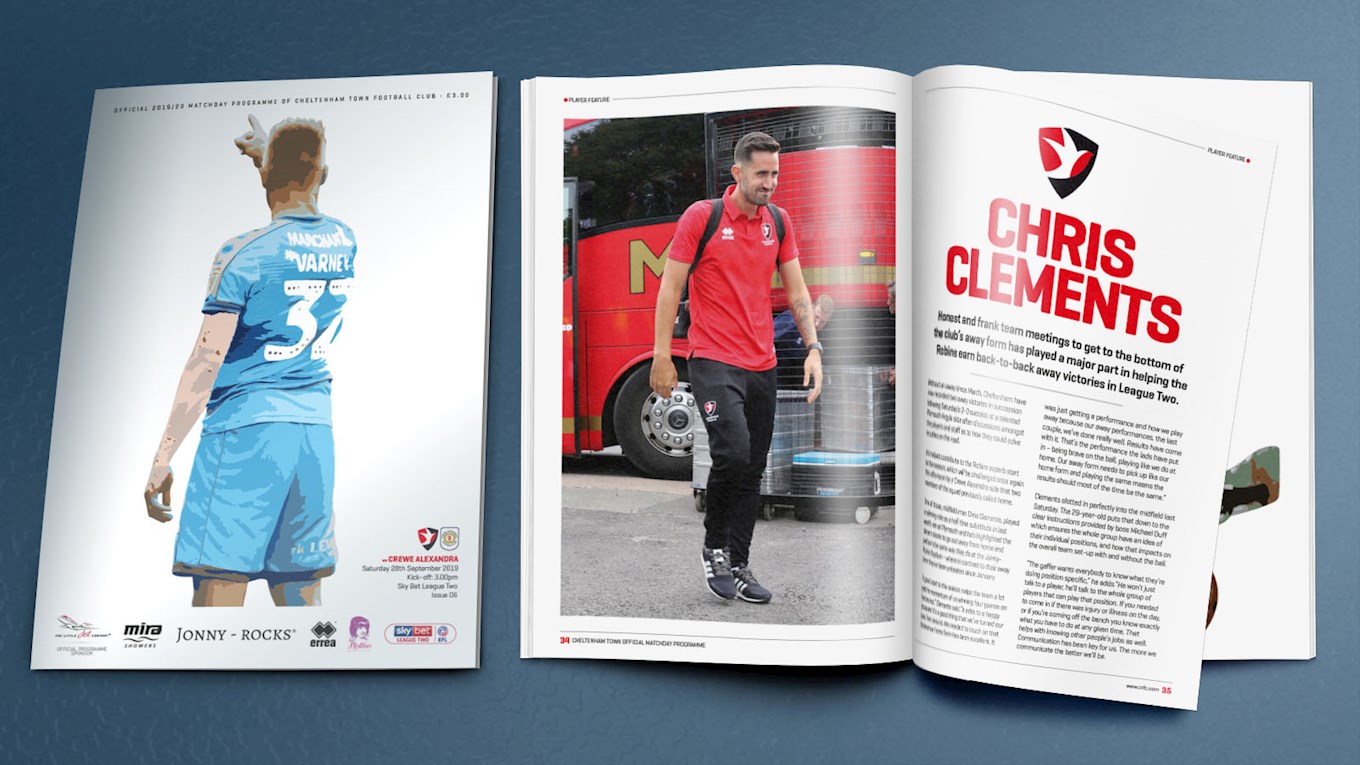 Stay up to date with events at the Jonny-Rocks by following @CTFCofficial on Twitter for team news, photos and updates during the game. Goal updates and team news will also be available on the club's Facebook page.

After the game you can visit the club website to read a match report and see reaction from boss Michael Duff.

Listen to match commentary via iFollow by tuning in online. Highlights will be available on the club website and YouTube channel shortly after the game.

Cheltenham Town and Crewe Alexandra played out a 1-1 draw in Sky Bet League Two on Saturday in a tight, tense top of the table battle.

Gavin Reilly scored a scruffy opener from a corner kick in the opening exchanges to send the Robins top of the league as it stood.

Crewe forward Chris Porter grabbed the equaliser in first half stoppage time as the away side grew into the game.

Both sides had chances to win it in the second half, most notably Ryan Broom, who had space in the area in the 87th minute but hit a low shot straight at Will Jaskelainen.

From the resulting corner, Cheltenham opened the scoring. Hussey’s delivery was headed by Jacob Greaves and scrambled home by Reilly on the goal line.

Cheltenham dominated after the breakthrough and their high pressing was suffocating the away side into their own area.

Reilly could have added to his goal 10 minutes later when he raced through on goal, but he was denied by a Nicky Hunt challenge.

It was an intensely close first half an hour, and birthday boy Luke Varney came close when a corner-kick routine found him in space 12 yards out, but his low drive was blocked.

Crewe, who came into the game one spot above their hosts in the table, nearly equalised through Chris Porter but the big forward saw his header bobble wide.

Alexandra equalised right on the stroke of half time when Porter was slid through on goal by Harry Pickering and the forward swept the ball past Flinders at his near post.

Cheltenham seemed rattled and Daniel Nolan saw a shot from the right side of the area trickle wide just moments later.

Crewe were putting the pressure on early in the second period and Hussey was forced into a rash challenge on Charlie Kirk, which brought him a yellow card.

Luke Varney missed a quilt-edged chance on the hour-mark when he was found by Sean Long just six-yards out in the box but his shot rolled harmlessly wide.

Moments later danger man Kirk had a great chance to curl one into the far corner inside the Cheltenham box, but his mis-controlled touch led to a wayward shot.

Cheltenham responded with a spell of possession which led to Hussey finding Reilly in the box, but his shot on the turn span just wide of the far post.

Crewe were reduced to ten men with 20 minutes to go when referee Lee Swabey dismissed the visitors captain, Perry Ng, for a second bookable offence.

Substitute striker Alex Addai came off the bench and almost flicked home a winner after a driving run and cross from defence by Jacob Greaves.

Addai was close to providing the winner when he raced forward and found Broom in space in the box only for the Welshman to fire straight down Jaaskelainen’s throat.

Get behind the Robins this Saturday at the Jonny-Rocks Stadium for a second against third place clash in League Two.

Following Saturday's fantastic win at Plymouth Argyle, this Saturday Crewe Alexandra are the visitors for a top of the table contest.

Both teams are in great form and have made a fine start to the season.

It's a not to be missed clash this weekend as Michael Duff's men look to extend their superb unbeaten home run with a positive result that could take his team into the top two of the division.

The players are going to once again need the vocal backing of the Robins fans to help them continue to push on matchday eleven of the League Two campaign.

Tickets for the game are available to buy at any time online for Saturday.

They can also be bought in advance from the ticket office during the week which is open on Tuesday, Thursday and Friday between 10am and 3pm. You can buy in person or call the ticket office on 01242 573558 (option 1) to place your order.