After four straight home fixtures it's finally back on the road for Michael Duff's Cheltenham Town side at Exeter City on Saturday (kick-off: 3pm).

Back-to-back cup fixtures in the FA Cup and Leasing.com Trophy have left the Robins without a League Two fixture since the beginning of the month, but now it is back to the bread and butter of League football with a trip to Devon for a no doubt testing encounter with a fifth placed Exeter team.

Cheltenham are sixth going into the contest and are one point behind their hosts having played two games less.

It has all the makings of an entertaining League Two fixture as Duff's men look to make it five unbeaten away from home - the last time Cheltenham lost on the road was at Exeter in the Leasing.com Trophy at the beginning of September.

After his first appearance in a Cheltenham shirt on Tuesday night, Reuben Reid will be hoping to be involved in the matchday 18 against one of his former clubs.

Fellow striker Tahvon Campbell is still unlikely to be involved, while Josh Debayo is making progress on his return from injury but it's too soon for the left wing back to be available.

Scott Flinders also spoke to the media this week ahead of Saturday's clash.

There is talk coming out of the Exeter camp of potentially having 10 first team players unavailable for Saturday's game because of injury issues.

The medical department at St James Park may be busy at the moment but they otherwise carry a number of other strong players at this level who will pose Cheltenham a big test this weekend - like the Robins Exeter have only lost at home in the league once all season.

At the back goalkeeper Lewis Ward has a broken arm so former Forest Green shot-stopper Jonny Maxted is the man who will don the gloves. In front of him his backline includes ex-Bristol Rovers man Tom Parkes, while the experienced Craig Woodman brings much needed calmness too.

Their midfield features a familiar face for Cheltenham fans. Nigel Atangana joined Exeter in the summer after leaving the Jonny-Rocks Stadium and the Frenchman has now recovered from the achilles injury he suffered last January at Crawley. 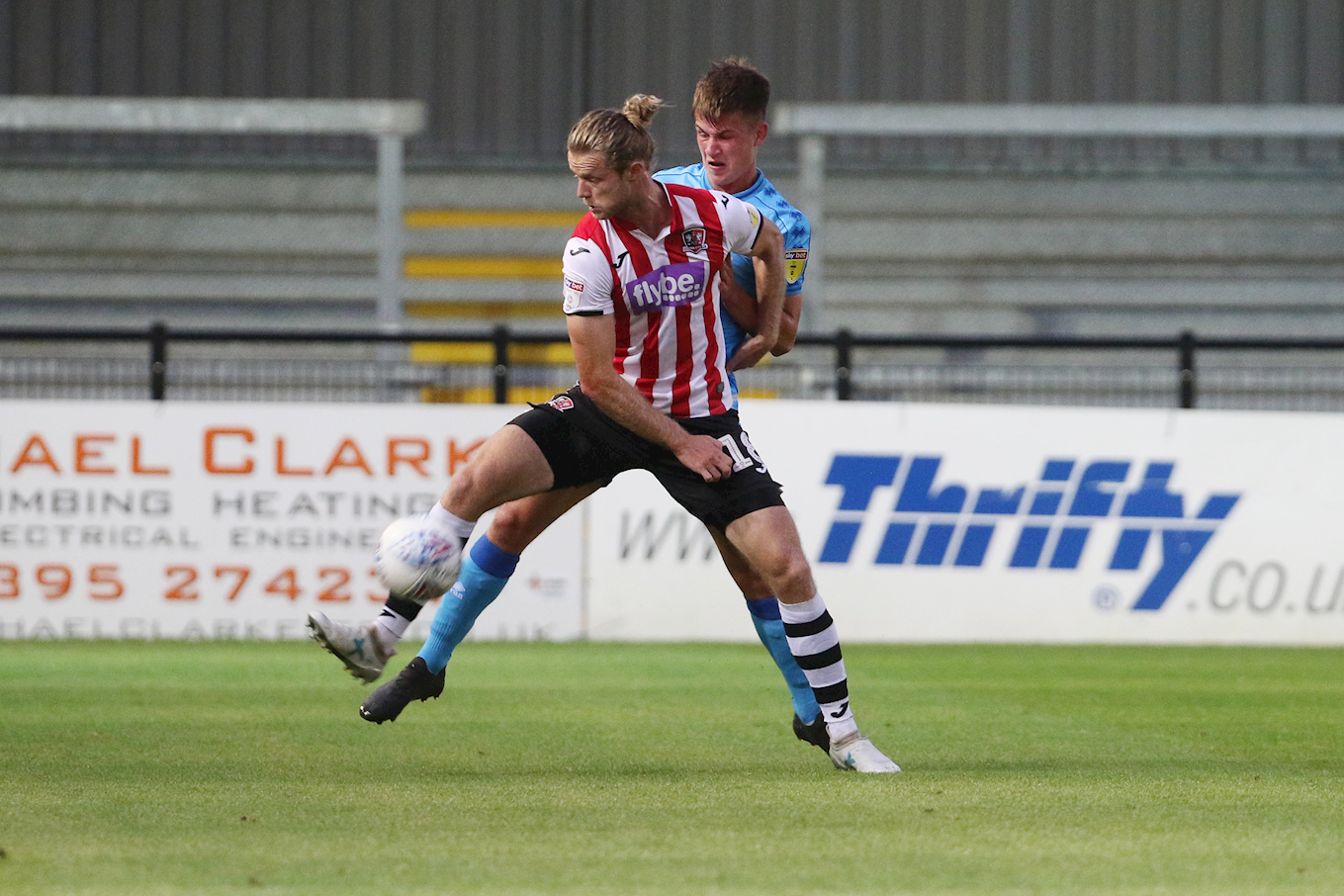 Another former Cheltenham face could feature. Jordan Tillson spent the second half of last season on loan in Gloucestershire from Exeter. Down the right 22-year-old Randell Williams is a livewire to watch out for.

In attack they boast the physicality of Alex Fisher and alert Ryan Bowman. Academy product Matt Jay provides plenty of energy and Lee Martin is an experienced head who can name Manchester United, Ipswich Town and Millwall amongst his former sides.

There are familiar faces on the pitch for Exeter and a familiar one in the dugout too. Former Cheltenham defender Matt Taylor is in charge at St James Park.

The 37-year-old spent the 2014/15 season in Gloucestershire and dropped into non-league football after his spell in Whaddon, going on to study and coach at Hartpury College before making his way back into the professional game.

Saturday's game will be the second meeting between the two clubs this season after a 3 September meeting at St James Park in the Leasing.com Trophy.

An early goal settled the final result that night. Nicky Ajose, who could return for Exeter this weekend after injury, was the scorer as he latched onto a free kick to direct the ball past Rhys Lovett from close range. 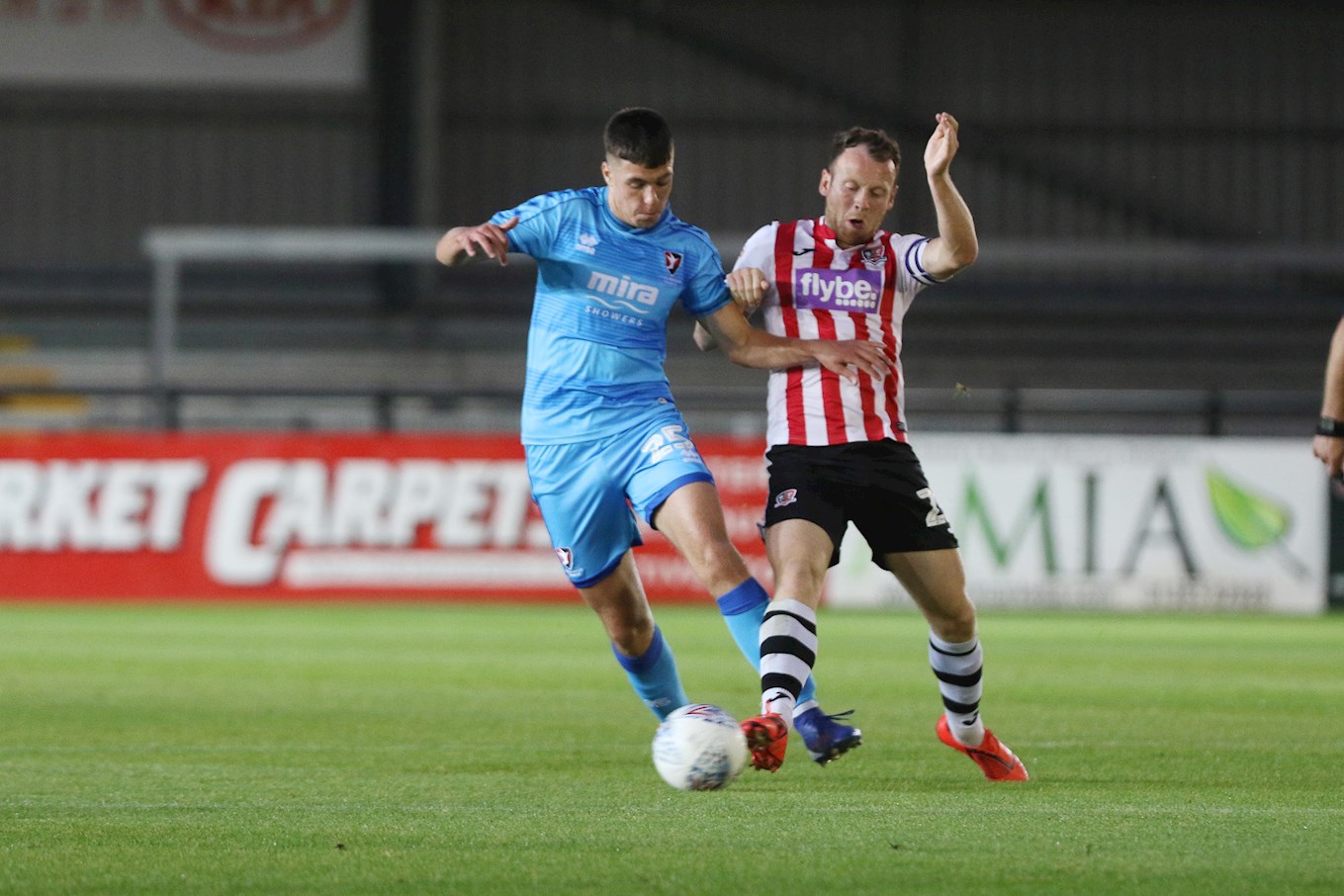 A young Robins side battled well in an attempt to earn a draw in the second half. Under-18s midfielder Tom Chamberlain (pictured) was handed his debut that day and performed well, but Jonny Maxted kept a clean sheet for the Grecians to get them off to a winning start in a group they went onto win after recording a final group win over West Ham United under-21s on Wednesday evening.

Watch back the highlights from that tie:

Cheltenham fans can buy tickets for Saturday's game at the stadium on the day. Prices are:

Supporters who have booked on the Travel Club coach are reminded that it departs from the Jonny-Rocks Stadium at 10.45am. Travellers are being asked to park towards the front of the car park before boarding the coaches as some of the car park will be used for coaches attending racing at Cheltenham Racecourse on Saturday.

Follow @CTFCofficial on Twitter for team news before kick-off, match updates and live photos. You can also see team news and score updates over on the club's Facebook page. You can hear full match commentary by tuning in on iFollow.

After the game check out the club website to read a match report and see reaction from inside the camp including boss Michael Duff and a member of the playing squad.

Highlights will be available on iFollow from midnight. They can also be viewed on the club's YouTube channel and on Facebook on Sunday.

Cheltenham Town stretched their unbeaten run away from home to five matches in League Two with a battling point at Exeter City.

The Robins rode out the storm in a first half largely dominated by the Grecians but improved in the second period to grind out a goalless draw at St James Park.

Having played two matches in cup competitions since their last League Two fixture, manager Michael Duff made wholesale changes to the side that were knocked out of the Leasing.com Trophy midweek.

With seven changes from Tuesday’s loss against Newport, Duff went with the same starting 11 that faced Forest Green Rovers a fortnight ago, but Will Boyle wasn’t included in the squad due to illness.

After making his debut against the Exiles, Reuben Reid made the bench against his former club alongside plenty of attacking options.

The hosts, missing a number a key players due to injury, matched the Robins up playing 3-5-2 and forced a corner inside the opening five minutes but Aaron Martin headed wide at the back post. 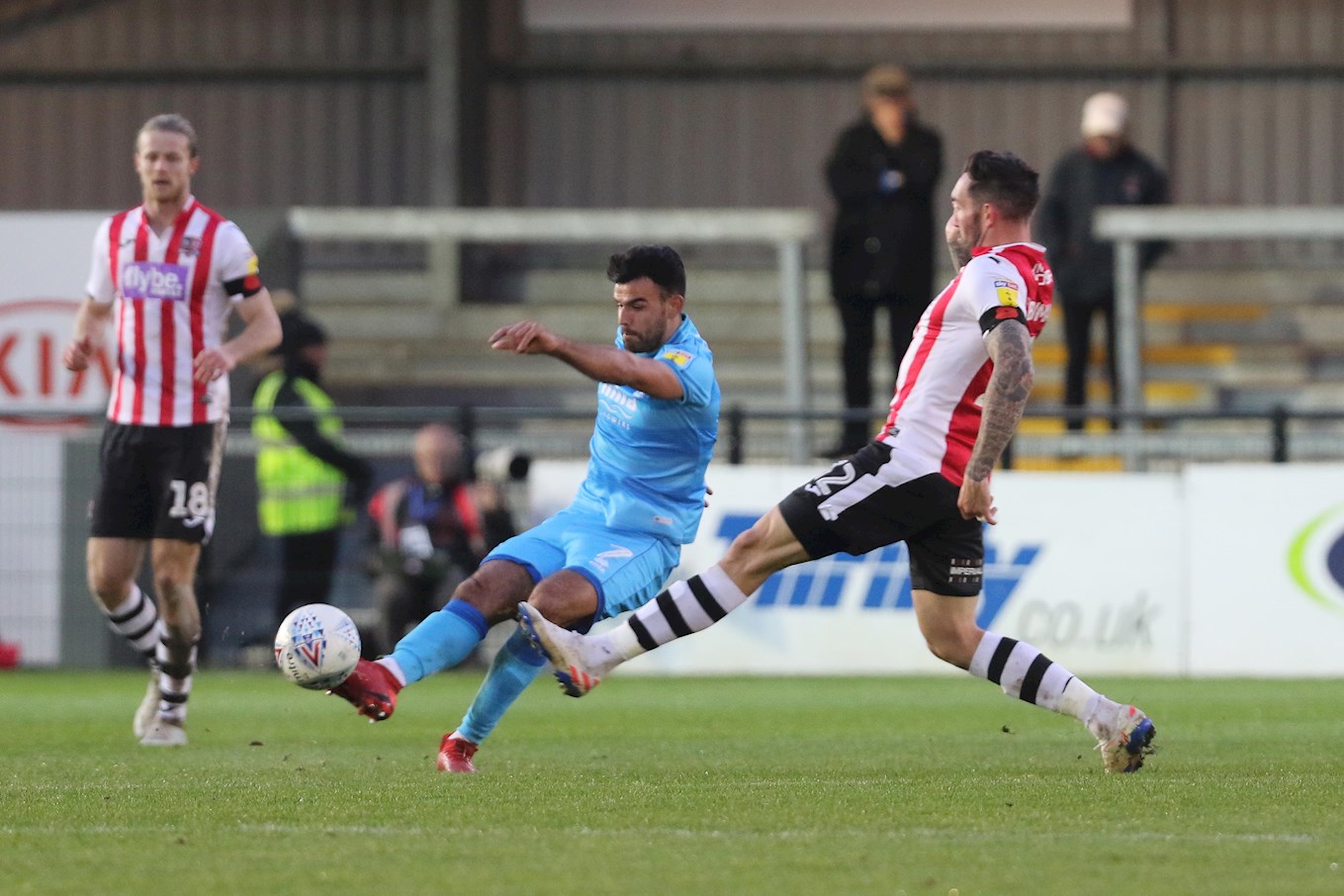 Randell Williams, who had contributed with the most assists in the division so far this season, was a prominent threat in the early stages down the right side and Scott Flinders did well to hold his teasing cross shortly after.

A hopeful long ball through the centre of the pitch then found Grecian striker Ryan Bowman in the 19th minute but he dragged a shot wide of the target when closing down on Flinders’ goal as Matt Taylor’s men continued to look a threat.

Jack Sparkes then forced the Robins ‘keeper to make a tricky save as his long-range effort nearly led to the opening goal in front of the Big Bank Terrace.

Chris Hussey provided the first real chance for Duff’s side, but his low-driven cross was dived on by Jonny Maxted in the Exeter goal before Reilly could get a touch.

The tenacious Williams then robbed Jacob Greaves out wide before failing to pick out an unmarked Alex Fisher as the pressure grew on the visiting goal.

The battle between Williams and Hussey remained the main focus of the match but it was a cross from the other side that nearly resulted in the deadlock being broken as Pierce Sweeney volleyed at Flinders as Cheltenham managed to get into the break level. 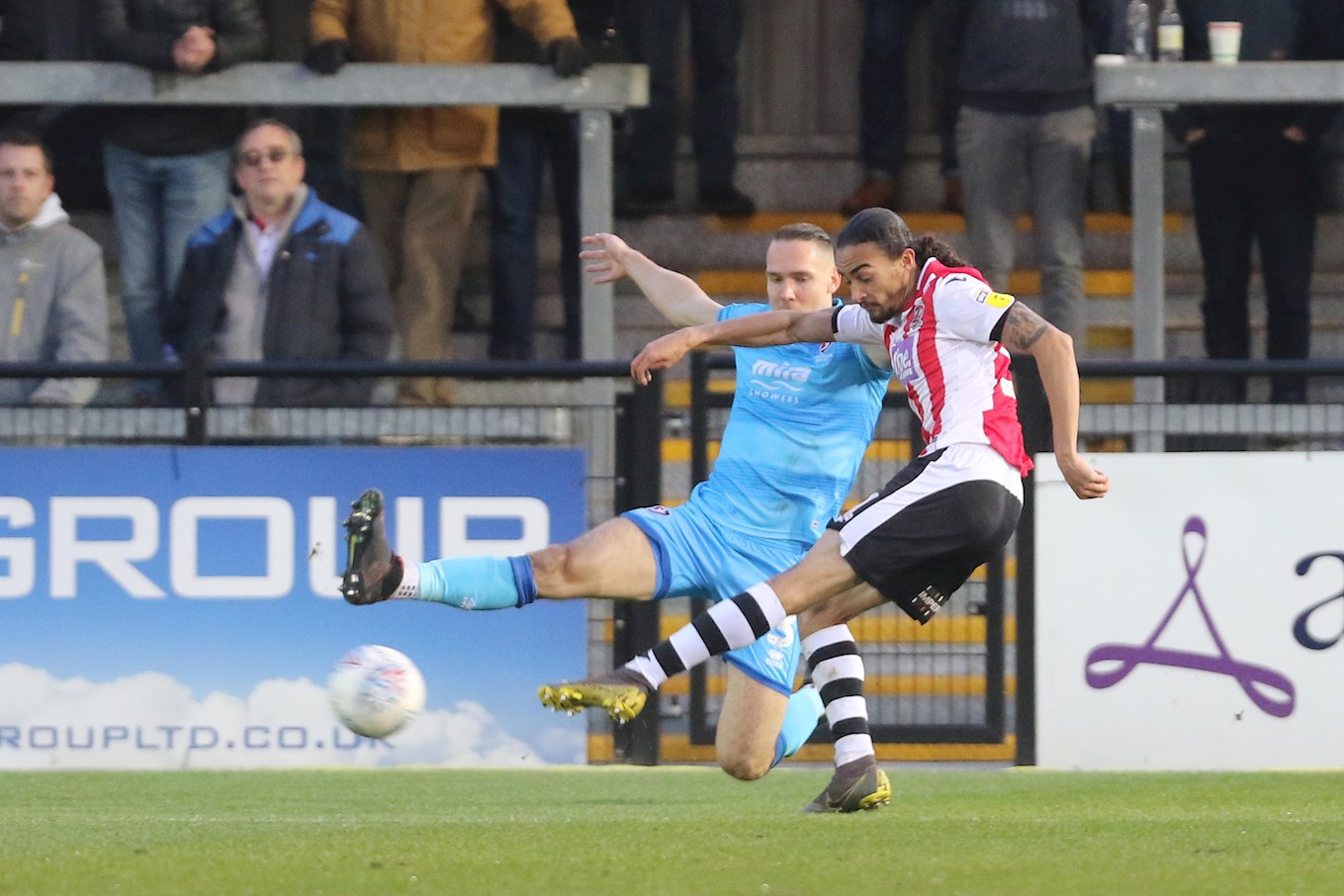 It was an instant improvement from the visitors at the start of the second period with some neat touches in midfield as they probed to try and find a way through the stubborn Exeter back-line, as Sean Long’s volley called Maxted into action for the first time.

A nice phase of play then saw Ryan Broom thread Luke Varney through, but Martin made a vital sliding challenge to block his effort deep inside the penalty area.

Penalty shouts were waved away by the referee at the other end as Hussey failed to clear Matt Jay’s diagonal ball and Greaves ushered Lee Martin away from goal as the match approached the 73rd minute. 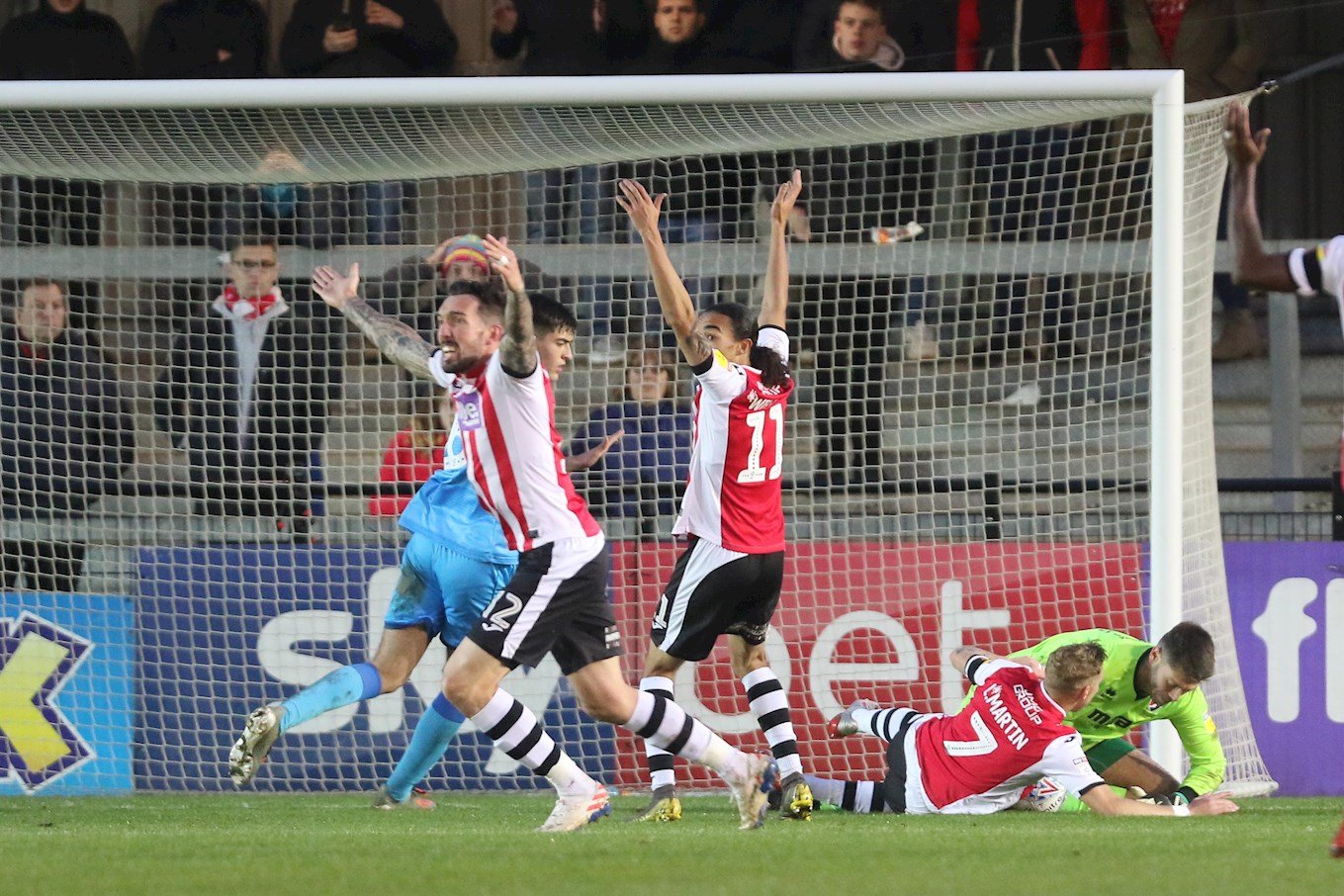 As Reilly nearly connected with Long's cross at the one end, Williams, who performing well for the Grecians, cut inside and flashed a shot just wide of the top corner.

The Robins failed to seriously test Maxted but nearly snatched the points late on as substitute Alex Addai beat his man and crossed in only for Conor Thomas to place his shot wide as he did the previous week against Swindon.

But Cheltenham did hold on to pick up a valuable away point and a well-earned clean sheet in Devon.

Cheltenham Town fans can buy tickets and away travel for the upcoming away match at Exeter City on Saturday 16 November from the ticket office.

After this week's upcoming FA Cup first round, Leasing.com Trophy group stage and FA Youth Cup second round fixtures, the Robins head down the M5 to St James Park to take on the Grecians in another big higher end of the table clash for Michael Duff's men.

It's hoped a big Chelteham away following will make the trip to Devon in support of the squad as they look to return to winning ways in League Two.

Ticket prices for the match have been confirmed:

You can check out Exeter's away guide for visiting fans online.

Supporters can also book away travel on the Travel Club coach, which departs from the Jonny-Rocks Stadium at 10.45am.

Tickets can be bought from the ticket office which is open on a Tuesday, Thursday and Friday between 10am and 3pm, including for the home matchdays against Swindon Town and Newport County AFC this week.