It's a big night in the Leasing.com Trophy for Cheltenham Town as fellow League Two side Newport County AFC visit the Jonny-Rocks Stadium (kick-off: 7.45pm).

Michael Duff's side have a good chance of progressing to the second round stage if they can record a positive result against their Welsh opponents, who themselves need to win if they are to keep their hopes alive of getting through.

Exeter City host West Ham United under-21s in the other match in Southern Section Group E on Wednesday, which will decide how the group finally ends up, but the Robins will be aiming to do a job tonight to put themselves in a good position to qualify for the next stage.

Forward Reuben Reid is expected to play a part on his return from knee surgery in the summer. It will be the strikers first involvement in a competitive first team game after completing 45 minutes for the reserve team last Tuesday in a win over Reading.

It's unlikely Tahvon Campbell and Josh Debayo will feature but there may be more game time for Max Sheaf after he came on as a substitute last weekend against Swindon Town.

Captain Ben Tozer could feature against his former club if he is selected.

With a League Two game to come up against Exeter City on Saturday and next Tuesday's FA Cup replay with Swindon Town, Michael Duff will be looking to manage his team and utilise his squad.

Tonight's visitors still have an opportunity to progress into the knockout stages despite being bottom of the group. They need to win and hope other results fall in their favour if they are to make it to the next stage of the competition.

They've lost both of their games so far - a dramatic 5-4 home loss to West Ham United under-21s in September, and then a 2-0 home loss in October to current group leaders Exeter City.

They'll be hoping to make an impact on the group with a positive result this evening. They'll also see it as a chance to get back to winning ways having not recorded a victory in either league or cup since a 2-1 win over Scunthorpe United on 19 October.

They drew 1-1 with Grimsby Town on Saturday in the FA Cup first round so will travel to Lincolnshire for a replay next week. 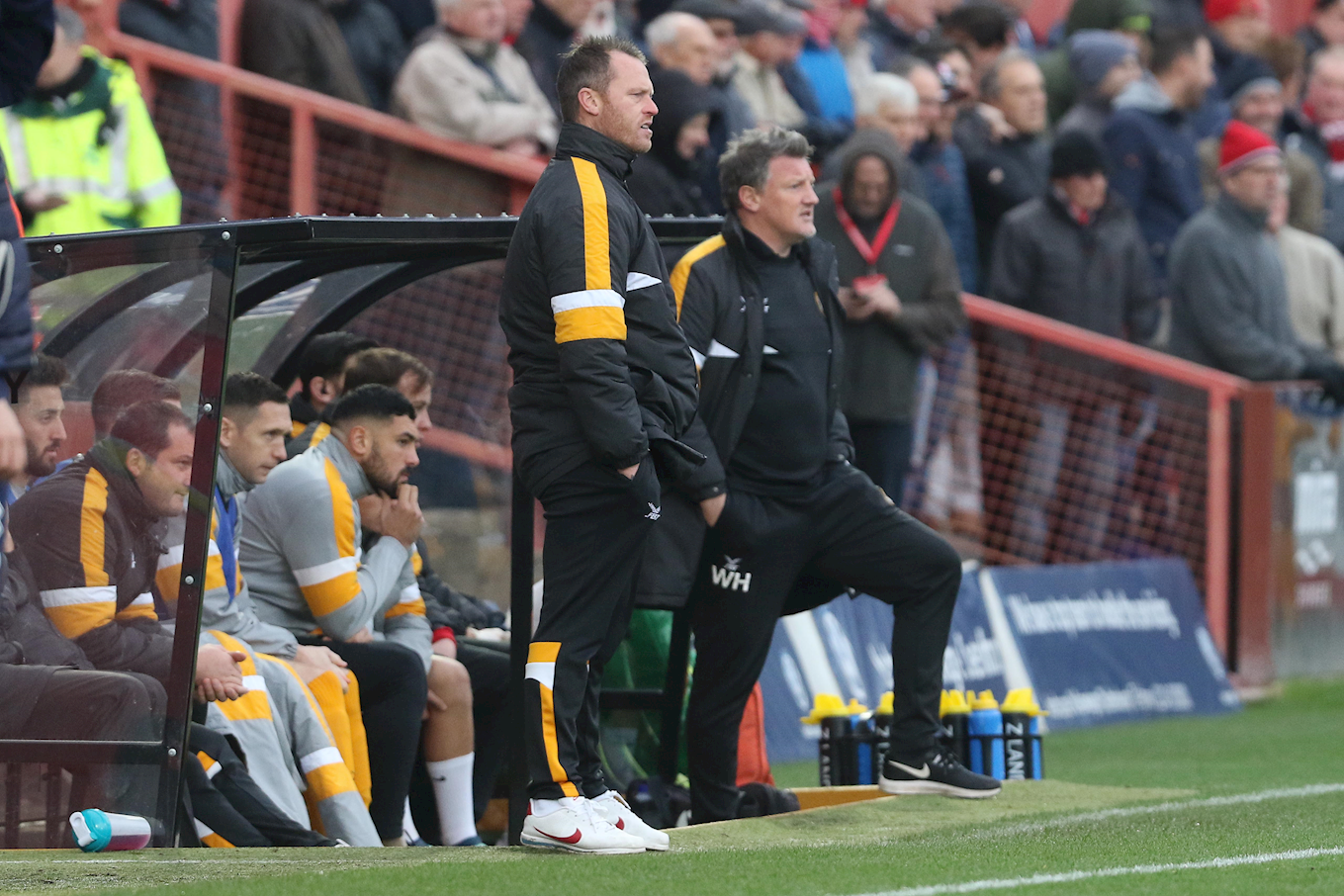 In the Leasing.com Trophy so far they've used usual number two goalkeeper Nick Townsend, while 17-year-old academy product Ellis Watts has started both of their group games so far.

Charlton Athletic loanee Taylor Maloney could be involved tonight, former Cheltenham loanee Ryan Inniss may also play a part, and the leadership of midfield man Matt Dolan could prove important for the younger members of their squad gaining exposure in the competition.

Managed by Michael Flynn, who is now under contract until the summer of 2022 after guiding County to the League Two play-off final last season, he has been in charge since the start of a caretaker spell in March 2017 where a remarkable turnaround in form earned him the permanent role in south Wales.

Last season in the same competition

A penalty shootout victory in last season's Checkatrade Trophy saw Cheltenham progress to the third round of the competition last time the two clubs met in this competition.

With both teams having managed to get through their respective group stages they met in the knockout rounds, and after a 1-1 draw it was Cheltenham who went through thanks to a penalty shootout win.

Padraig Amond scored in the first half to give Newport the lead, but Alex Addai struck with an acrobatic finish to ensure the game would head straight for penalties.

Michael Duff's side successfully netted all seven of their spot kicks to come out in the shootout as 7-6 winners. Mark Harris saw his penalty saved by Scott Flinders to complete a second round win for the Robins.

Revisit that game last season with the highlights:

Tickets are available on the turnstiles this evening. The Autovillage Stand, Paddock and sections of the Colin Farmer Stand will be open to Cheltenham supporters.

Prices for this evening's game are £6 for adults and £4 for concessions.

The ticket office will be open tonight for fans wanting to purchase tickets and away travel for Saturday's match at Exeter City and for other upcoming home fixtures. The club shop will also be open before the game selling CTFC merchandise in the lead up to Christmas.

Follow tonight's game on social media by checking out @CTFCofficial on Twitter. You can see minute by minute updates during the game, team news before kick-off and in game photos by following, while on Facebook you can also see the club's page for team news and score updates.

Post-match check out the club website to read a match report looking back at the game and to watch reaction from manager Michael Duff.

Highlights will also be available on the club's YouTube channel and iFollow, while you can watch the whole game with a match pass on iFollow tonight too.

Newport County thrashed Cheltenham Town 7-4 in the Leasing.com Trophy in a heavy defeat that meant the Robins exited the competition at the group stage.

Hat-tricks from Taylor Maloney and Tristan Abrahams as well as Matty Dolan’s penalty were enough for a comfortable win for Mike Flynn’s side to keep them alive in the competition.

Max Sheaf’s first Cheltenham goal had brought Michael Duff’s men level at 1-1, and although they came from two down to make it 3-3 with goals from Alex Addai and Sean Long, it would end in defeat.

Fresh from his late goal against Swindon at the weekend, Addai tested Nick Townsend early on with a fearsome left-footed strike inside the area.

He had another chance moments later, rising highest to meet Will Boyle’s floated cross to nod high and wide from six yards out.

Rhys Lovett gifted Newport the lead on seven minutes when he dropped the ball under pressure from Abrahams, and Maloney was on hand to tap into an open net.

Corey Whitely almost doubled the lead when he hit the post with a powerful strike from range, with the ball bouncing off the back of Lovett and bobbling just wide.

It was a lovely goal that got Cheltenham level, Rohan Ince picking out Addai on the edge who flicked on to Sheaf, who took a touch and side footed into the net. 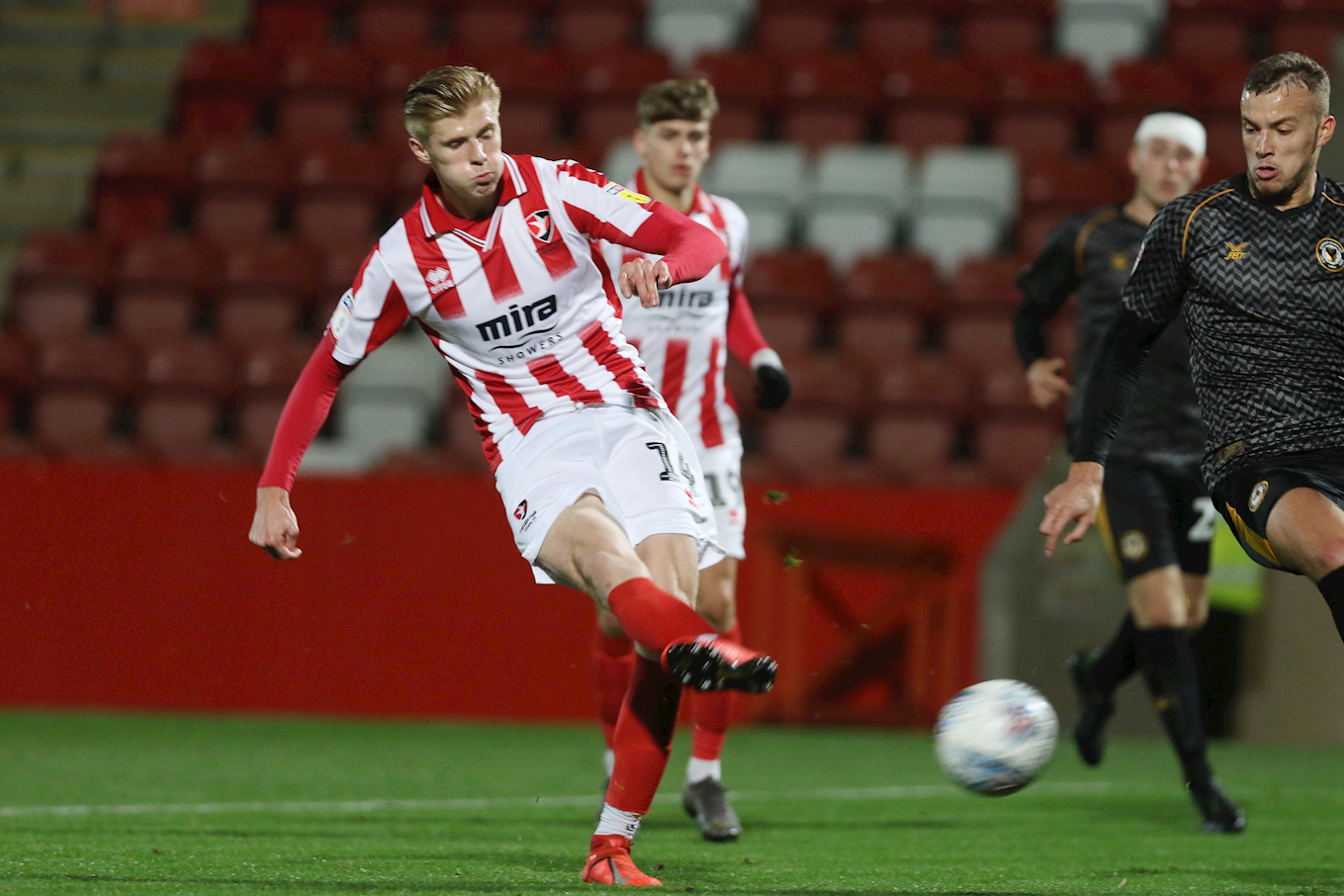 Dolan put the visitors back in front from the spot, rolling it into the bottom left corner after Lovett fouled Abrahams who ran onto a poor back-pass by Tozer.

Abrahams made it 3-1 moments later, rounding Lovett after he was too slow in coming off his line to slot into the empty net.

Addai pulled a goal back on 34 minutes after Chris Hussey was fouled just inside the area, Addai scoring the rebound after his low penalty was saved.

And Long brought the Robins level by nodding Hussey’s cross into the far corner after George Lloyd put off the defenders to make it a free header for the Irishman. 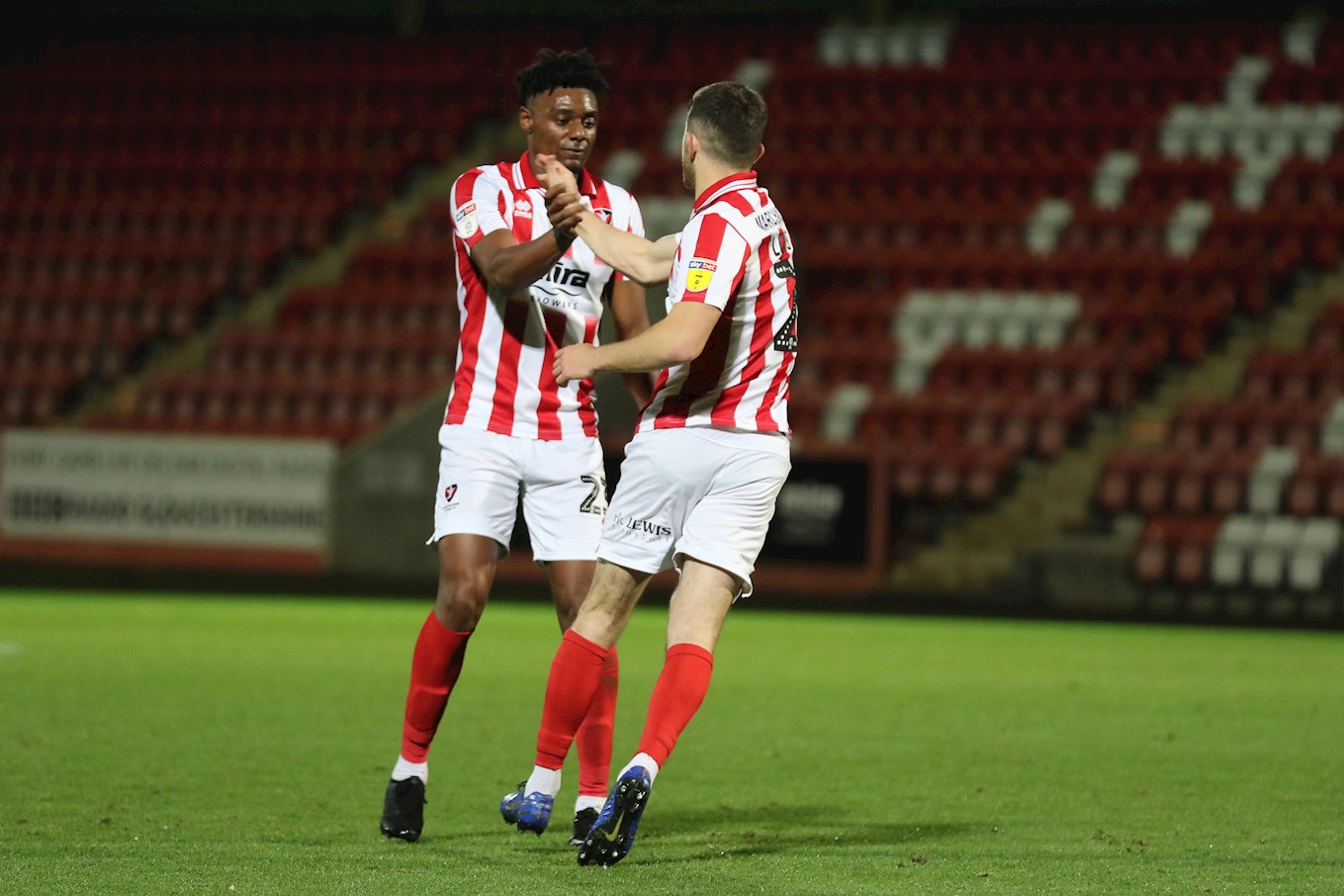 Abrahams got his second of the evening making it 4-3, turning in George Nurse’s cross with a terrific left footed shot on the turn.

In first-half stoppage time, Maloney scored to restore the two-goal lead, slotting home from outside the area to make it 5-3 to the Welsh side at the interval.

Maloney completed his hat-trick on 52 minutes, curling past Lovett on the edge of the area after a slight deflection off Tozer.

Abrahams was looking for a hat-trick of his own, running onto a through ball from Nurse to hit a shot straight into the sliding Boyle.

Abrahams did get his third on 67 minutes, turning on the edge of the box before firing a powerful, curling effort that flew past Lovett to make it seven.

Lloyd had a decent chance to reduce the deficit when substitute Reuben Reid’s deflected shot found him six yards out, but his diving header went straight at the ‘keeper with the goal gaping.

Tozer scored a consolation by nudging in from Clements shot from a free kick but it wasn’t enough for a late fightback.

Addai went close as the clock ticked down by getting on the end of Boyle’s lofted through pass, and flashed a shot just wide of the top right corner.

Townsend made a double save in the 90th minute, denying Lloyd one-on-one and Jacob Greaves’ follow up drive.

Kick-off is at 7.45pm in what is the final opportunity for the Robins to qualify for the knockout stages of the competition.

On matchday one a young side lost 1-0 down at Exeter City, while on matchday two Jonte Smith bagged a hat-trick as Cheltenham came from behind to defeat West Ham United under-21s 4-3 at the Jonny-Rocks Stadium.

Cheltenham and Newport play on Tuesday with Exeter hosting the young Hammers on Wednesday evening. So Cheltenham may have to wait 24 hours to be sure whether or not they will progress.

Ticket prices for Tuesday's fixture are:

They are available to buy online ahead of Tuesday, and will also be on sale at the turnstiles on the night.