It's a third against fourth Gloucestershire derby at the Jonny-Rocks Stadium on Saturday as Cheltenham Town get set to host Forest Green Rovers (kick-off: 3pm).

Both teams have enjoyed strong openings to the League Two season with both sides locked on 28 points, with the Robins having played a game less, ahead of the first meeting between the two this season.

Last seasons encounters both ended as draws, and with the opportunity to edge in front of one another at stake, it'll be a hard fought contest in front of the biggest attendance of the season.

Supporters are advised to get to the stadium early due to the size of the crowd. Fans collecting tickets from the ticket office need to arrive in good time to make their collections.

Former Forest Green duo Reuben Reid and Tahvon Campbell will be unable to face their former side. Reid is not yet match fit but back in training, while Campbell is carrying an injury picked up in training.

Max Sheaf could be considered after returning to training this week. Josh Debayo is another back in training having completed his recovery from a recent operation.

Midfielder Chris Clements is one Robin who could be set to line up against one of his former sides.

Charlie Raglan and Conor Thomas have also been having their say ahead of the weekend.

Like Cheltenham, Forest Green's fixture at home to Crewe Alexandra was postponed last week because of a waterlogged pitch.

It's Rovers third season at this level. Last season they reached the play-offs for the first time in the division, but lost to Tranmere Rovers in the semi-finals, who eventually went onto reach League One with promotion at Wembley.

This season they've been one of the best travellers in League Two, recording their most recent away win in their last fixture at Morecambe where they claimed a 2-0 win against the division's second from bottom club.

The Little Club on the Hill have big ambitions again this season. Owner Dale Vince took charge at the club in 2010 and has said he's expecting the club to reach the Championship.

To do that Saturday's opponents are hoping to move the club away from its 130 year base in Nailsworth to a new stadium just off junction 13 of the M5 motorway. Having had their initial plans for the stadium rejected the club have resubmitted the plans. They hope to build a similarly size environmentally friendly stadium to their current home on green fields just off the motorway which will also have the capacity to house 1,700 cars.

Promotion will be another step along the way in the direction Rovers are trying to head. To do that they have a squad that includes the likes of ex-Southampton and Burnley wing back Joseph Mills (pictured), whose brother Matt Mills is also in the squad but unlikely to feature. 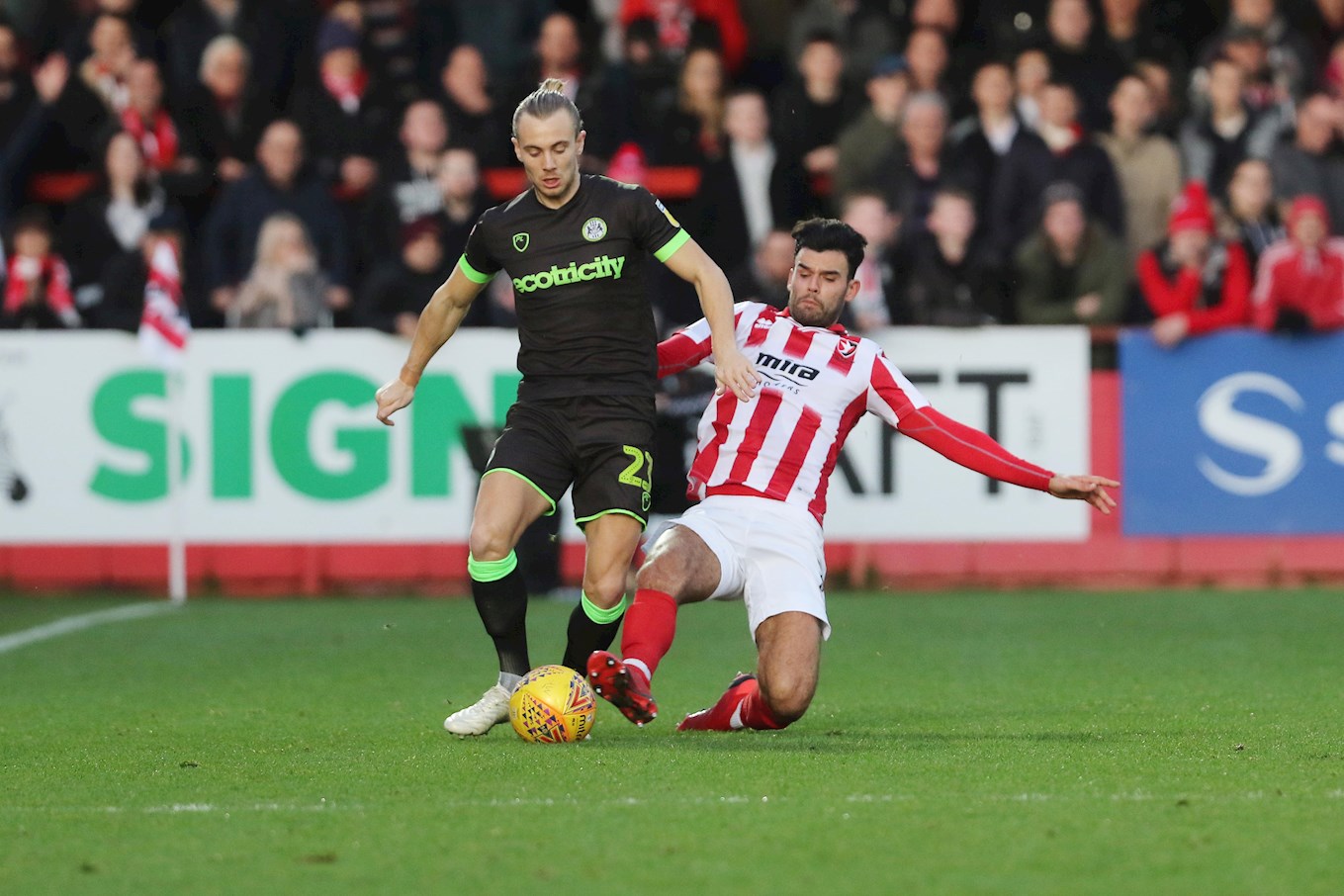 Former Robins midfielder Carl Winchester is also a key figure, while Liam Shephard and Matty Stevens are an ex-Peterborough pair that they paid transfer fees for to bring them to Gloucestershire.

Ebou Adams provides energy in midfield and is the second Gambia international to play for Rovers behind Omar Koroma, while another ex-Robin, Kevin Dawson, is unlikely to play as he's currently carrying an injury.

They recently re-signed former winger Elliott Frear after he left Scottish Premiership side Motherwell at the end of last season on a short-term contract. A former Cheltenham resident, Frear is the only remaining FGR player who played in the derbies the two clubs shared during the National League 2015/16 season which saw the Robins pip Rovers to the title.

Last season's clash at the Jonny-Rocks

The final match of 2018 saw the two teams come head-to-head at the Jonny-Rocks Stadium last season.

Having already drawn 1-1 earlier in the campaign, this time Cheltenham had to come from two goals down to salvage a point in a mad two minutes towards the end of the game.

Level at the interval, FGR grabbed hold of the game when they scored twice in eight second half minutes.

Now Robins forward Tahvon Campbell broke the deadlock, and Wales international George Williams then made it 2-0 in front of the travelling supporters.

A mistake by Nathan McGinley allowed Luke Varney to break through though and the experienced forward drilled home when one-on-one with James Montgomery to halve the score-line.

The FGR goalkeeper then made a big error when attempting to catch a cross two minutes later, which allowed Conor Thomas the opportunity to bundle in to make it 2-2 to complete the comeback and to ensure the match ended again in a draw.

Revisit the highlights from that game last season:

There will be three familiar faces returning as special guests for Saturday's match.

Former Robins Craig Armstrong, Kayode Odejayi and Damian Spencer will be at the game to meet with supporters as guests of the club.

Armstrong and Odejayi also played for FGR, with Armstrong joining Saturday's opponents after leaving Cheltenham, and Odejayi being signed from the Nailsworth club before going on to play at a higher level at Barnsley. 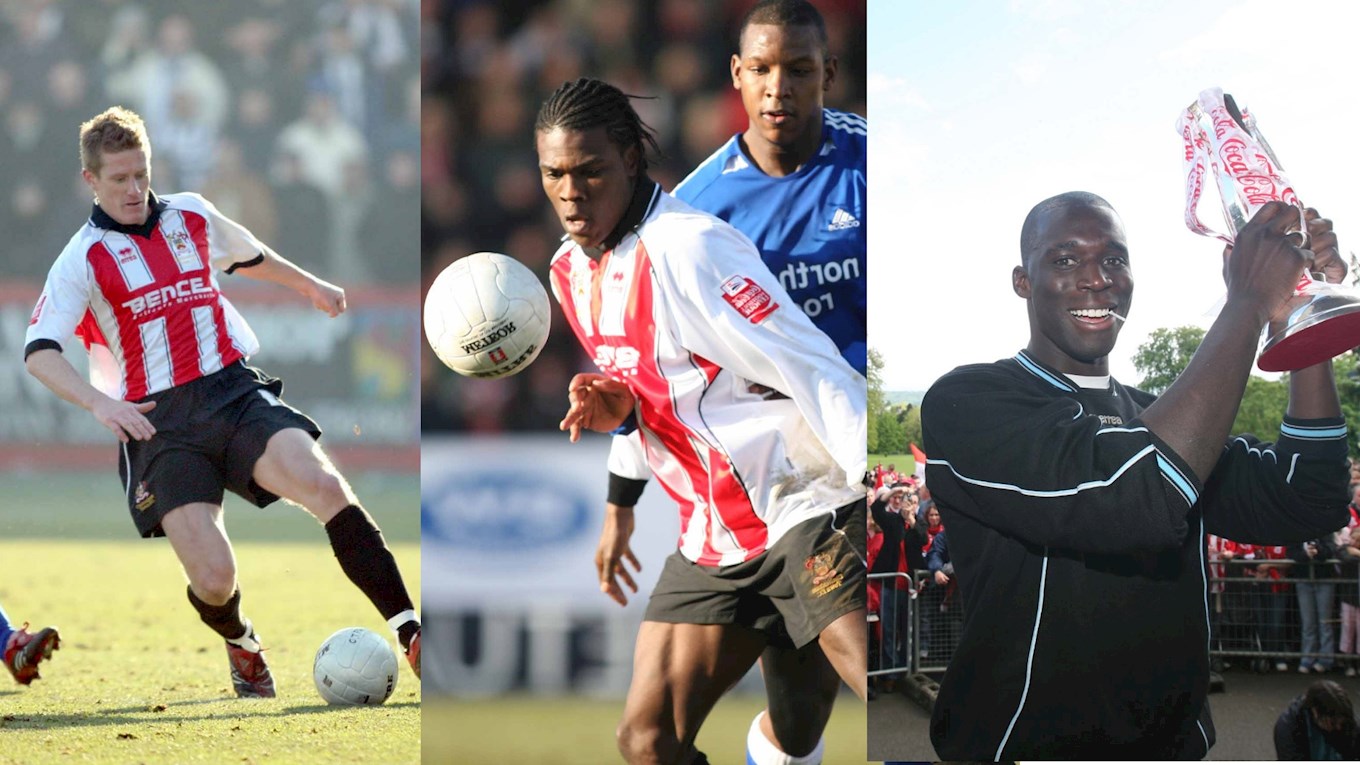 Tickets can be bought online ahead of Saturday's game. Fans can buy on the turnstiles for the Speedy Skips Stand, Paddock and Tunnel areas, however there is very limited availability in the Colin Farmer Stand. The Autovillage Stand is sold out.

The ticket office is open from midday. There is a ticket collection point and fans are urged to arrive early to collect pre-ordered tickets. Fans in the Colin Farmer Stand can collect their tickets from the collection point for this stand.

Supporters can visit the club shop from midday too to buy CTFC merchandise and copies of the matchday programme.

There are lots of exclusive features to read in Saturday's match programme. Luke Varney is the main interview as he discusses the success of the team so far this season given the limited resources available, how it has similarities to when he represented Blackpool in the Premier League and his thoughts on big derby matches from his career.

Jacob Greaves is on interview discussing the preparations ahead of the match, ex-player Darren Carter, who represented both Cheltenham and FGR, recalls his memories from both teams. Chris Hussey is next for the quick-fire questions, while Conor Thomas selects his dream 5-a-side team from ex-teammates.

Under-18s forward Charlie Stanton features on interview as well, and there are the pre-game thoughts of boss Michael Duff and chairman Andy Wilcox to catch up on too.

Copies of the programme will be on sale around the stadium and are priced at £3 per copy. 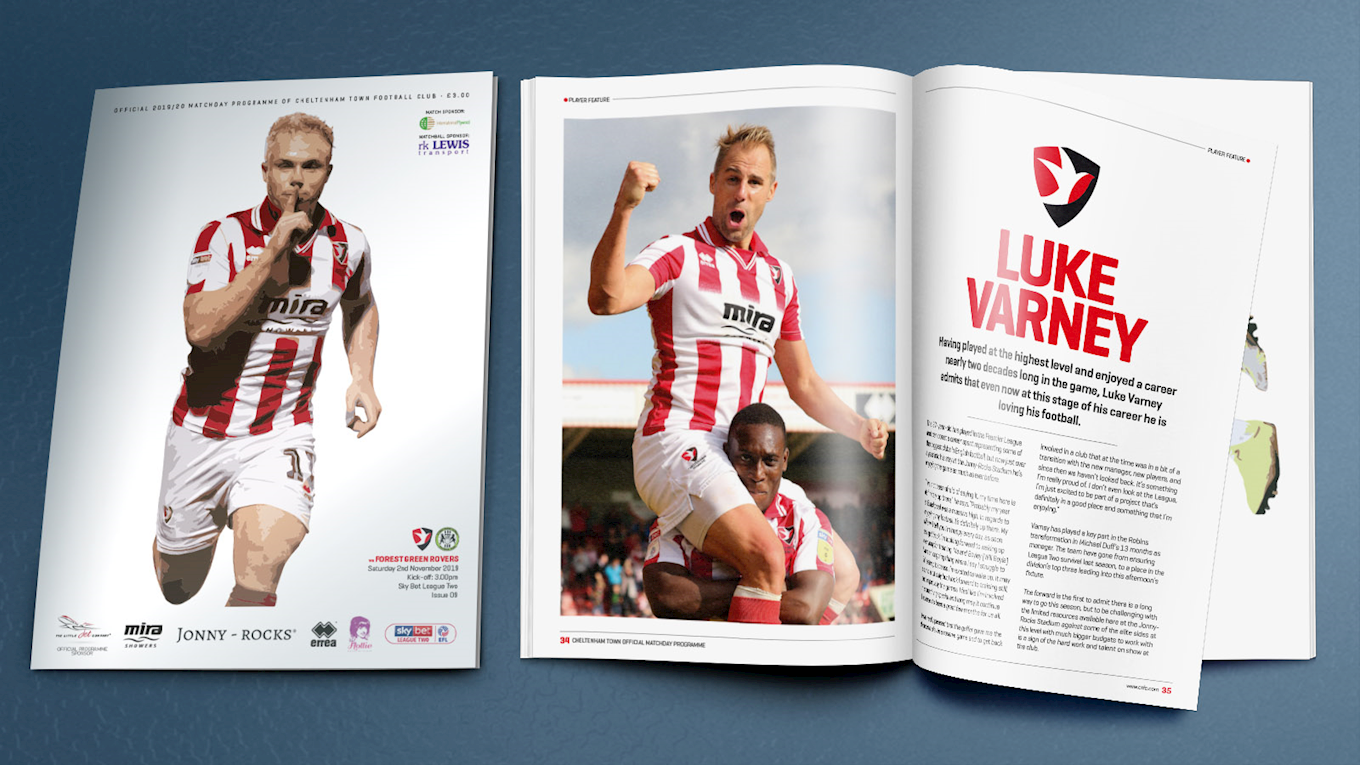 Supporters wanting to make a full day of Saturday's sport can watch the Rugby World Cup final from the Robins Nest when doors open at 8am.

It's England against South Africa to decide who will be crowned world champion and fans can enjoy a cooked breakfast as well as full access to the bar.

The bar will stay open in the lead up to kick-off and will also be open after the game.

Follow @CTFCofficial on Twitter for team news, photos and match updates throughout the day. You can also see goal alerts and team news on the club's official Facebook page.

Post-match check out the club website to watch reaction from Michael Duff and a member of the playing squad.

Cheltenham Town lost 2-1 to Forest Green Rovers on Saturday in the Gloucestershire derby in League Two.

Goals from Jack Aitchison and Elliott Frear were enough to see them move top of the league in a tense battle at the Jonny-Rocks Stadium.

Luke Varney pulled a goal back midway through the second half but they could not break down the solid Rovers back-line.

Rovers striker Matt Stevens tested the keeper again with a speculative snapshot on ten minutes in what was a cagey opening.

The visitors took a deserved lead on 15 minutes however, when Aitchison fired past a helpless Flinders from close range.

Cheltenham’s best moments came down the left, and when Broom’s cross found Sean Long at the far post, his drilled shot was defended well by Mills.

Chris Hussey attempted a speculative shot with a free-kick from a tight angle, but saw it diverted by Ebou Adams’ diving header.

Adams nearly fired one in at the other end but his first-time effort from range sailed over the bar.

Rovers really ought to have gone two up on 27 minutes when Frear’s header missed at point-blank range.

Cheltenham almost equalised when Broom’s fizzed cross was met by Varney, but he did not connect as he would have wished. 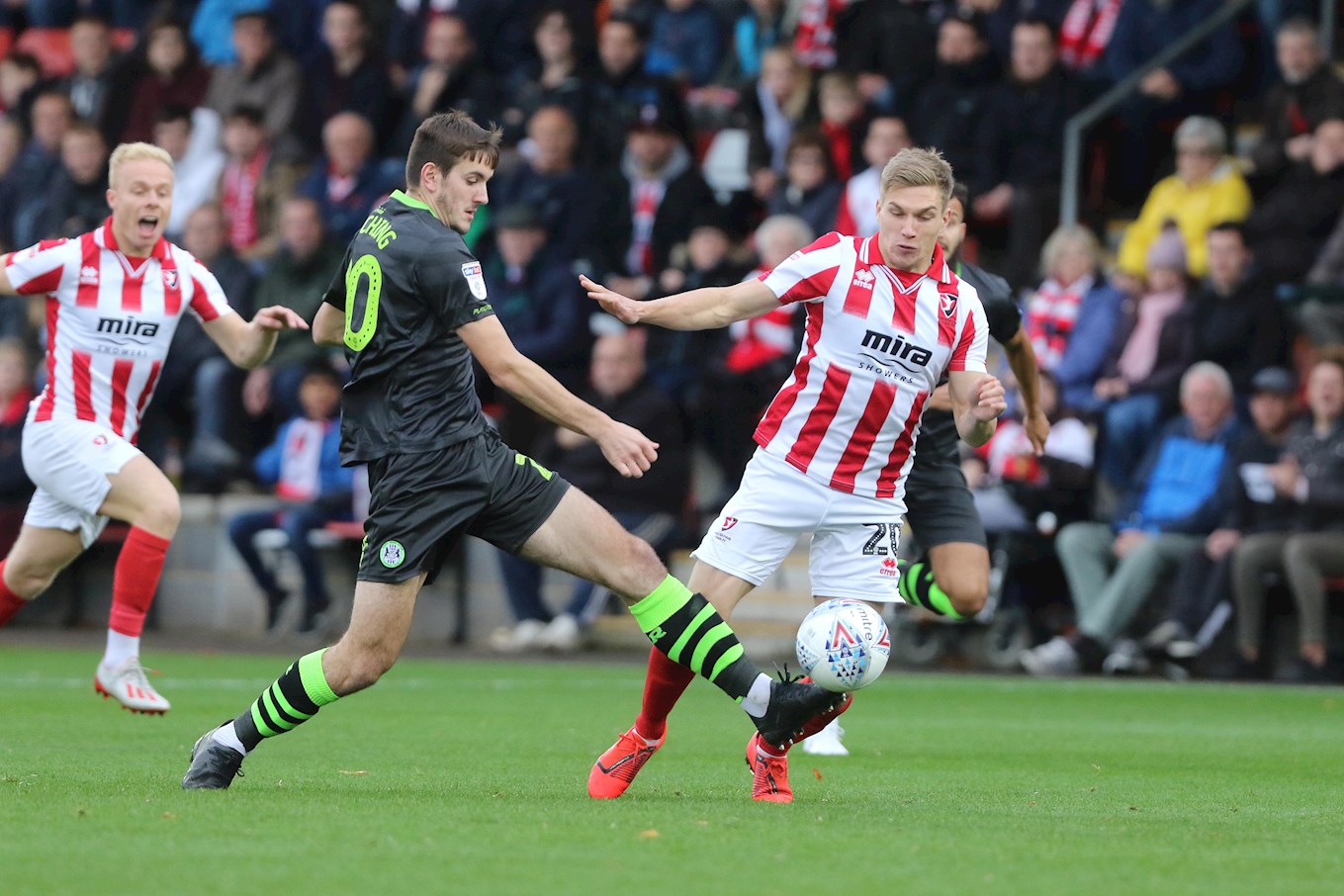 From the resulting corner he had another chance when Jake Doyle-Hayes found him six yards out, but he was denied by a piece of last ditch defending.

The visitors doubled their lead just before half-time with Frear timing his run in behind to perfection before toe-poking it into the bottom corner.

Michael Duff made a tactical change at half-time by bringing on midfield enforcer Rohan Ince for Charlie Raglan and moving Sean Long infield to right centre-back.

Despite that Frear came close to adding a third, cutting in from the left to shoot just over.

The Robins were gifted a lifeline when a Chris Clements free-kick was fumbled by ‘keeper Joseph Wollacott and Varney nodded in to make it 2-1.

Varney saw a shot parried with ten to go and would’ve hoped one of his fellow forwards would be there to pick up the scraps but it was cleared.

The drama intensified late on and Duff was booked as Cheltenham’s frustration grew.

The ticket office at the Jonny-Rocks Stadium will stay open until 6.30pm tonight for ticket sales ahead of Saturday's League Two meeting with Forest Green Rovers.

Supporters can visit the ticket office up to 6.30pm to buy tickets for Saturday's game, as well as for the upcoming FA Cup first round tie with Swindon Town.

There are still seated tickets in the Colin Farmer Stand and standing terrace tickets available for this weekend's fixture.

Fans are being urged on Saturday to arrive early to collect tickets to avoid long queues at the ticket office.

Supporters can also buy online at any time before Saturday, with the ticket office also open on Friday between 10am and 3pm.


Cheltenham Town can confirm that the Parklands turnstiles that provide access to the Colin Farmer Stand will be open for the upcoming home matches against Forest Green Rovers and Swindon Town. 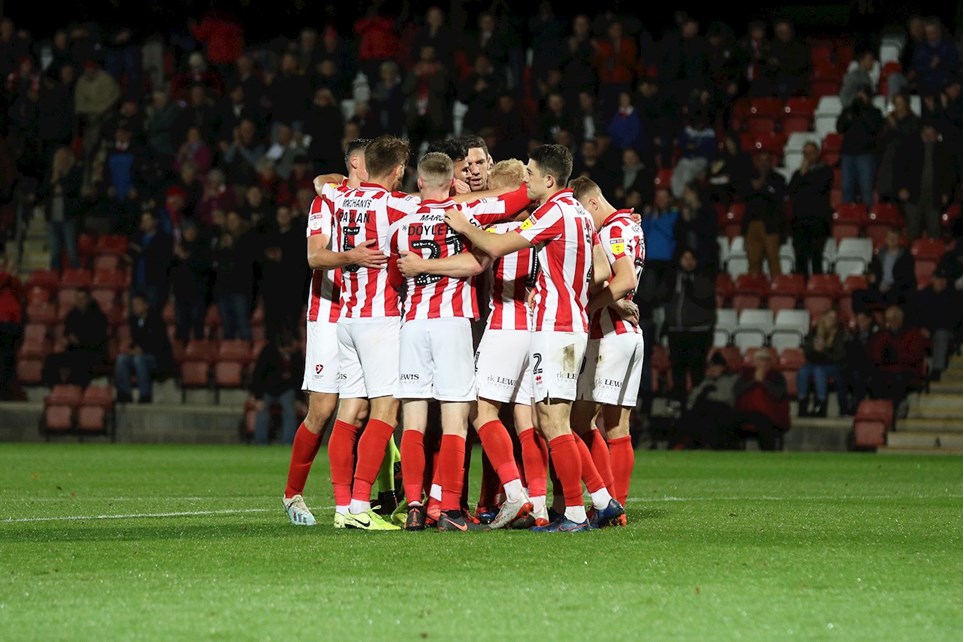 
The ticket office is back open on Tuesday from 10am till 3pm selling tickets for Saturday's match with Forest Green Rovers at the Jonny-Rocks Stadium. 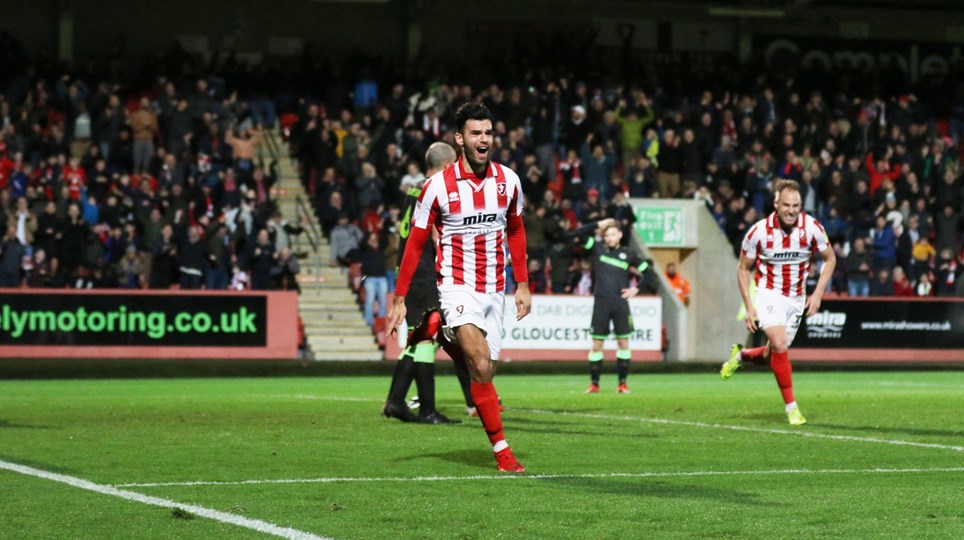