This season's big story in the Football League competition, the Essex side make the long trip west to provide Michael Duff's squad with a testing follow up to their excellent FA Cup first round replay away win at Swindon Town on Tuesday.

That victory over League Two's leading club has filled the squad with plenty of confidence heading into this weekend's next assignment, but with Colchester eyeing up the opportunity to force their way into the play-off spaces on Saturday, there's no doubting it'll be a keenly fought affair.

Saturday's match sees the club celebrate Stonewall's Rainbow Laces campaign. The nationwide initiative highlights the need to promote inclusion and diversity in football and to make those who are LGBT+ to feel included and part of football and sport.

The Robins Nest bar will be hosting a karaoke night after the game for fans enjoying a drink after full time.

After surgery on Tuesday it's been confirmed that Luke Varney will be missing for four to six weeks.

Joining him on the sidelines for Saturday are Tahvon Campbell and Josh Debayo who are still recovering from injuries, while Gavin Reilly is touch and go on whether he will be involved this weekend.

Watch Michael Duff's pre-match press conference ahead of the game:

Striker Jonte Smith has also been having his say ahead of Saturday's clash.

With the possibiltiy of moving up into the play-offs if they were to earn all three points on Saturday, Colchester will be keen to ensure they follow up their notable success in this season's Carabao Cup with continued progress in their league performances.

John McGreal's side have reached the quarter finals of this year's Carabao Cup and face the exciting prospect of an away trip to giants Manchester United in mid-December.

McGreal (pictured) will be hoping to keep his troops feet firmly on the ground ahead of that tie. Since beating Crawley Town in the last round to get to the final eight they have won at Mansfield Town, lost at home to League One Coventry City in the FA Cup first round and defeated Ipswich in the Leasing.com Trophy. With three league games to go till their trip to Old Trafford they'll be hoping to go there as high up in the fourth tier as they can be. 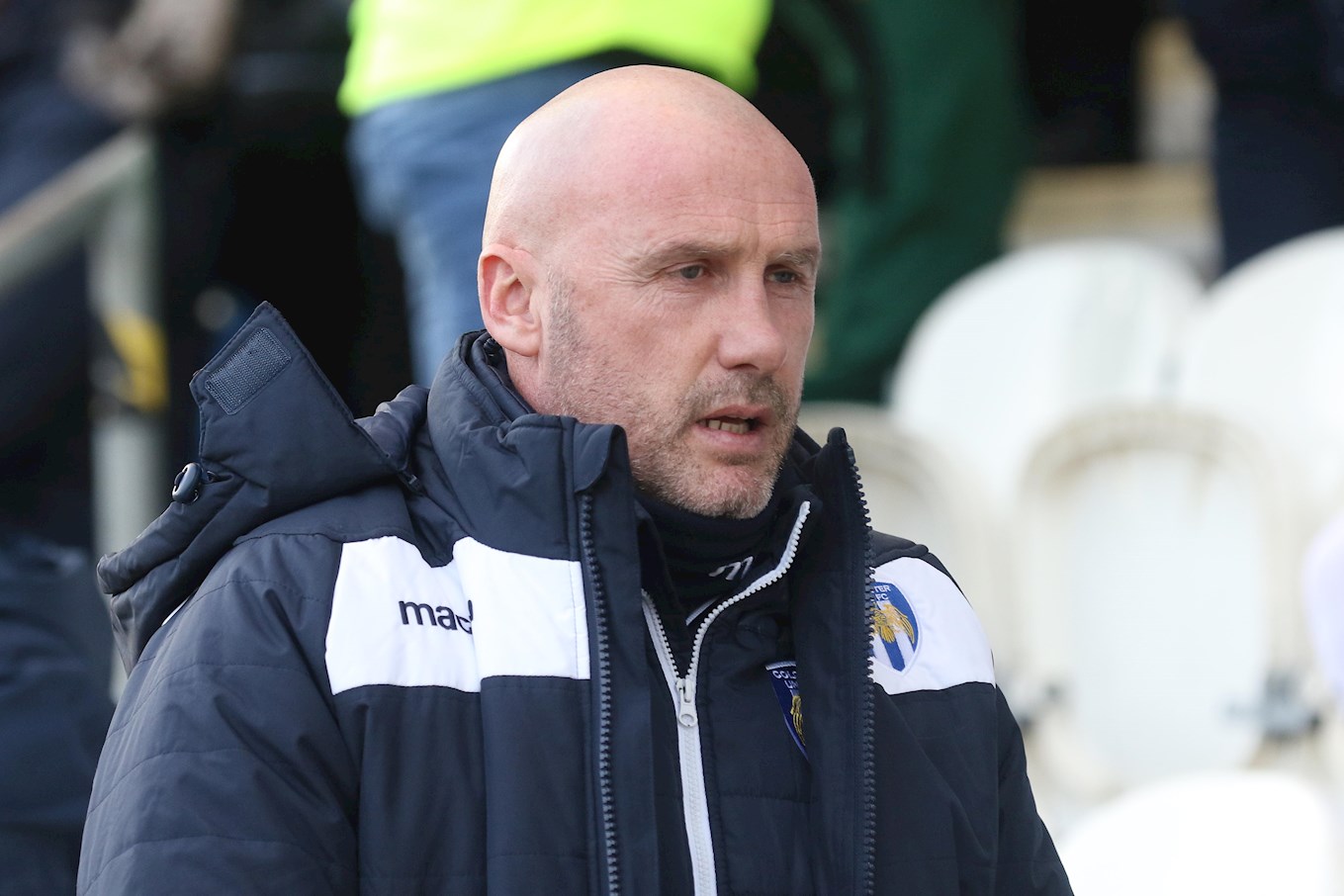 To do that they have youth product Dean Gerken, who is now back at the club this season after departing in 2009, to rely upon in goal. In front of him their backline features the long serving Tom Eastman, ex-Gillingham full back Ryan Jackson and former Arsenal youngster Cohen Bramall who played against Cheltenham last season in the Checkatrade Trophy.

Brandon Comley brings energy in their midfield. The Montserrat international could feature alongside the likes of fellow international Luke Gambin, of Malta, and 22-year-old Ben Stevenson.

They boast a string of forward options too. Luke Norris has notched five times this season, Frank Nouble brings plenty of power and Guyana's Callum Harriott is a possible name who could play. 21-year-old Courtney Senior adds plenty of movement and fluidity in the final third.

McGreal has been in charge since May 2016 having previously enjoyed a stint as caretaker boss a year before having worked with the under-21s. A former Burnley teammate of Michael Duff's, the 47-year-old also spent his playing days at Tranmere Rovers and Ipswich Town.

Saturday's visitors hold the edge in terms of previous meetings. It will be encounter number 16 on Saturday in league and cup competitions having previously faced one another in Leagues One and Two, the Football League Trophy and League Cup.

Last season when it came to League Two affairs Colchester did the double over the Robins, however a Carabao Cup meeting early in the season at the Jonny-Rocks Stadium did see a side then managed by Gary Johnson come out on top, courtesy of a penalty shootout. 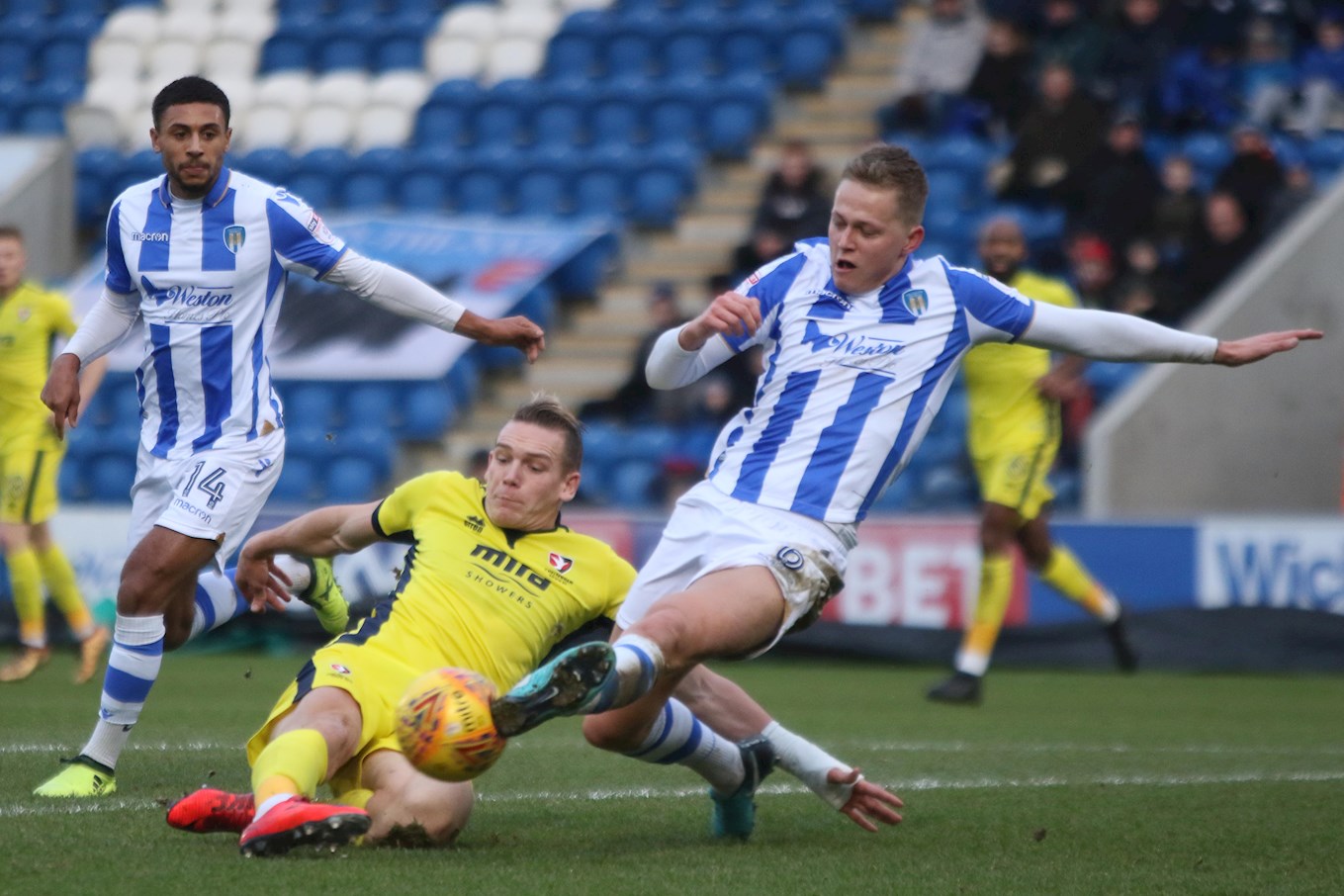 One notable meeting came in the 2008/09 campaign when Barry Hayles stoppage time winner secured a 4-3 win. Anthony Wordsworth's first half brace had helped Colchester to a 2-1 lead at half time after Darren Kenton had scored for Cheltenham.

And after Johnnie Jackson had made it 3-1 to the visitors early in the second half a fantastic comeback saw goals from Lloyd Owusu and on loan forward Stuart Fleetwood draw the two sides level.

Experienced striker Hayles then came off the bench on the hour mark and in stoppage time found the back of the net to secure three points in what was a League One clash played in front of a crowd of 3,580.

The ticket office is open from midday tomorrow selling tickets for Tuesday's rearranged match at Grimsby Town and the upcoming FA Cup second round clash with Port Vale on Saturday 30 November at the Jonny-Rocks Stadium. Season ticket holders have until Saturday to reserve their seat for the game with the Valiants.

Fans can also for buy online for Saturday's match, while tickets will be available to buy on the turnstiles.

The club shop will be open from midday as well selling Robins merchandise in the build up to Christmas.

Two former Robins from the 1980s will be returning as guests of the club on Saturday. Defender Anton Vircavs and winger Nick Jordan will be back at the club to meet with supporters and they'll also be presented to the fans at half time.

Vircavs spent six years at the club. A defender, he was signed by current director and former manager John Murphy from Wycombe Wanderers who he returned to after leaving Whaddon Road. He has also had a spell as manager of Kidlington when they were in the Hellenic League.

Jordan joined Cheltenham from Moreton Town and went onto make over 300 starts for the club. He helped the club gain promotion to the Gola League in the mid-80s and like Vircavs spent time managing in non-league at the end of his playing days - taking charge back at Moreton and also at Evesham United too.

Copies of Saturday's 72-page match programme are on sale around the stadium and in the club shop. It is priced at £3.

This weekend's issue features a big interview with on loan Aston Villa youngster Jake Doyle-Hayes. There are also other interviews with Max Sheaf and Alex Addai.

Stay up to date online by following @CTFCofficial on Twitter for team news, match updates, scores and pictures. You can see the club's Facebook page too for team news and score updates.

Listen to commentary online via the iFollow service and after the game check out the club website for a match report, reaction from the manager and a member of the team. You can also check out the website for highlights as well as the club's YouTube channel.

Luke Norris put the visitors ahead in the first half with a clever finish, with Conor Thomas levelling from the penalty spot at the Jonny-Rocks Stadium.

Both sides remain three points apart in the table, and it showed in what was a close encounter with not many clear-cut chances.

The home side started on top and hit the crossbar in the fifth minute, Charlie Raglan rising highest to head Chris Clements corner kick onto the framework.

Colchester attacking-midfielder Kwame Poku tried his luck from the edge of the area in the 18th minute but was denied by the outstretched leg of Ben Tozer.

Colchester took the lead when Norris got on the end of a long, raking pass by Tom Eastman out from defence that made its way all the way into the area and the forward just lofted it past Scott Flinders for the lead. 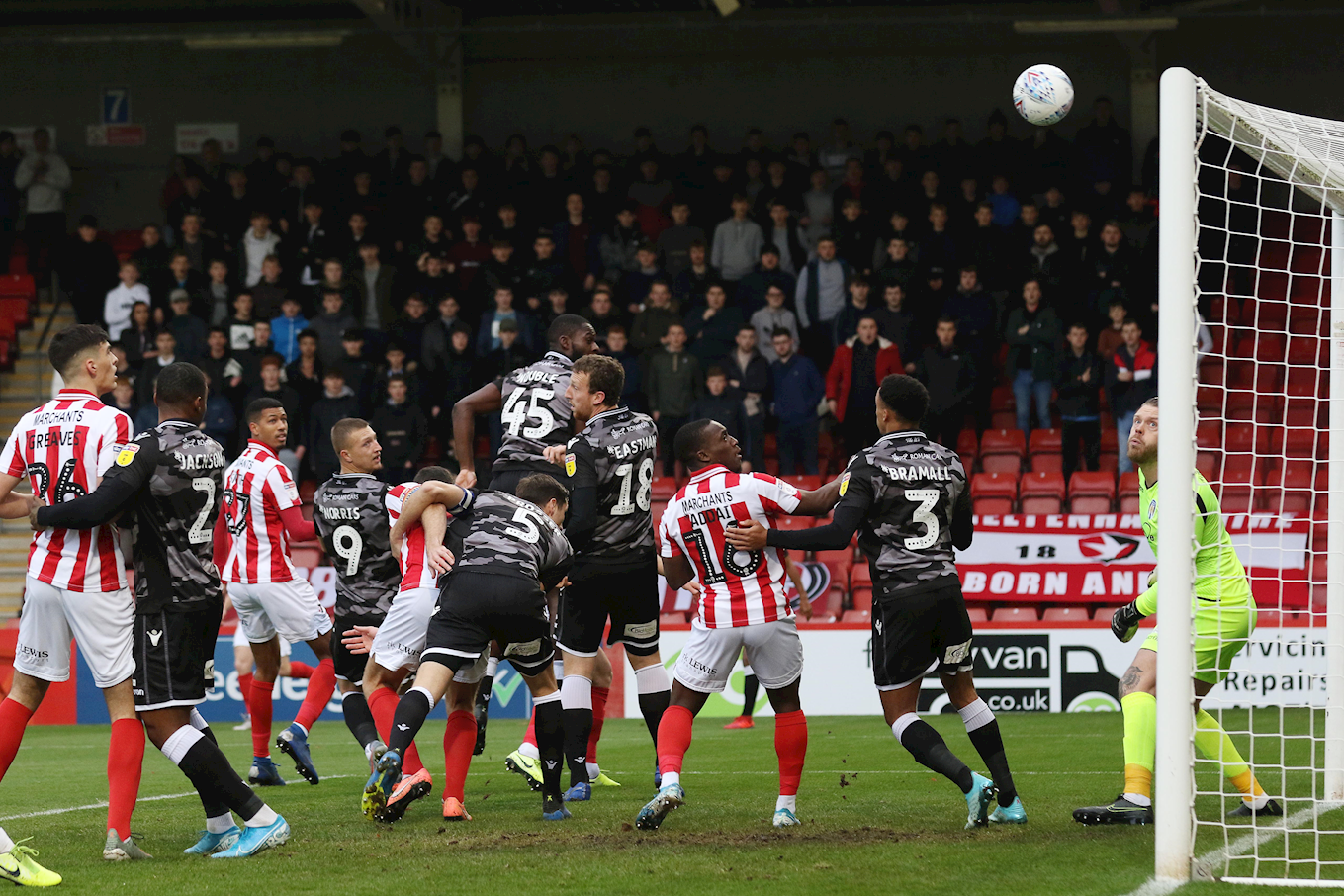 Raglan came close again from a set-piece, inches away from connecting with Chris Hussey’s in-swinging free-kick.

Hussey forced a reaction save from Dean Gerken with a great volley from outside the area, and Cheltenham came close moments later when Jonte Smith’s header flew high and wide from six yards out.

And in an action-packed end to the first half, Jake Doyle-Hayes had a shot from range that dropped just wide of the right-hand post.

Colchester were next to go close when Courtney Senior raced through on goal, shooting and beating Flinders, but also missing the target.

The Robins had another big chance to equalise when Alex Addai got on the end of Doyle-Hayes’ cross to head the ball straight at Gerken. 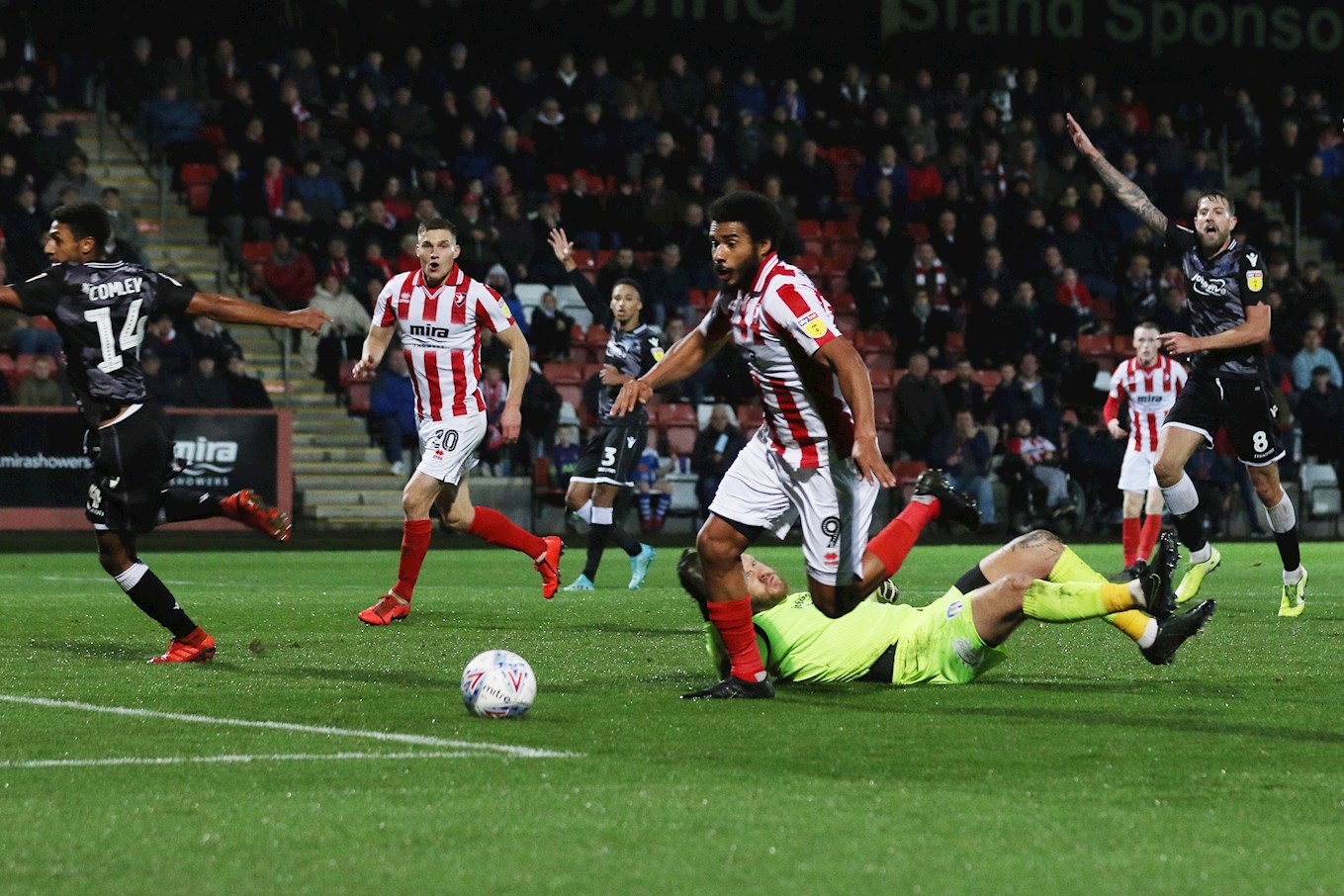 Reuben Reid almost made an instant impact when his well-hit volley flew just wide after coming on at half-time for his first appearance in the league.

A fluid Robins moved almost brought the equaliser on the hour mark, Broom eventually flashing a cross just out of reach for Gavin Reilly.

Eastman came close to putting the game to bed, getting on the end of Cohen Bramall’s free kick but stabbing it wide from close range.

Thomas brought Cheltenham level on 70 minutes from the penalty spot, after Reid was brought down by goalkeeper Dean Gerken when through on goal.

Jacob Greaves missed a guilt-edged chance to put the home side ahead with ten minutes left, nodding Hussey’s free-kick high and wide from close in.

MAN OF THE MATCH: Conor Thomas

After Tuesday's FA Cup heroics on the road at Swindon Town, it's back to League Two action on Saturday with a home match against Colchester United at the Jonny-Rocks Stadium.

Alex Addai's fine strike has secured a home second round tie with Port Vale on Saturday 30 November in the FA Cup, but the focus first of all is on this weekend's clash at the Jonny-Rocks Stadium.

Kick-off is at 3pm against the U's who are only three points behind Michael Duff's side so it's set up to be another tight occasion with a huge opportunity for both sides to continue making their mark towards the top end of the division.

Tickets for the game are available to buy in advance from the ticket office on Friday between 10am and 3pm. They can also be purchased online.

Following Saturday's match there's a night of karaoke music in the Robins Nest for supporters.

Following Saturday's match at the Jonny-Rocks Cheltenham travel north to Grimsby Town on Tuesday evening for the rearranged match with the Mariners.

Anyone unable to attend the match at Grimsby who had previously purchased for the originally postponed fixture must return tickets to claim a refund in advance of the game.