The challenging games keep on coming for Michael Duff's Cheltenham Town side as seventh place Port Vale are the visitors to the Jonny-Rocks Stadium this Saturday (kick-off: 3pm).

Last Saturday's win over Colchester United has left the Robins in a confident mood, not just for an impressive victory on the road at a fellow promotion rival, but because the win made it five successive victories - a run that has cemented the club's place in the division's top five and only two points off the automatic promotion places.

The visit of Vale this weekend represents the third game in a row Cheltenham have faced a fellow promotion contender.

It'll also be the third meeting between the two clubs this season having already met once in the league and in the FA Cup second round.

Tickets for the game are available to purchase online as it's hoped a large home support will back the Robins for another key fixture in the League Two end of season run in.

Conor Thomas and Jake Doyle-Hayes are back in contention after the midfield pair missed last week's game at Colchester.

George Lloyd is also back fit and available, while Luke Varney is a doubt after the injury that forced him to limp off last weekend. Scott Flinders is a long-term absentee.

Defender Charlie Raglan also spoke to the media as he gears up to face one of his former sides.

For a team who ended last season 20th in the division it has, like Cheltenham, been a vastly improved campaign this time around.

That in no part is reflected by the impact John Askey has made in his first full season in charge as manager. The former Macclesfield Town boss has improved Vale's fortunes and ex-Cheltenham coach Dave Kevan serves as his assistant.

They head into Saturday's fixture on the back of two 2-2 draws with Walsall and latterly Scunthorpe United. They had led Scunny right into stoppage time when they struck with a late equaliser.

Supporters will need no introduction when it comes to Vale's man in between the sticks. Scott Brown has made over 300 appearances for the Robins over two different spells and is in the second year of a two-year contract with Vale.

In defence their centre back partnership of Leon Legge and Nathan Smith offers solidity, while James Gibbons and Cristian Montano have the ability to get up and down in their full back areas. 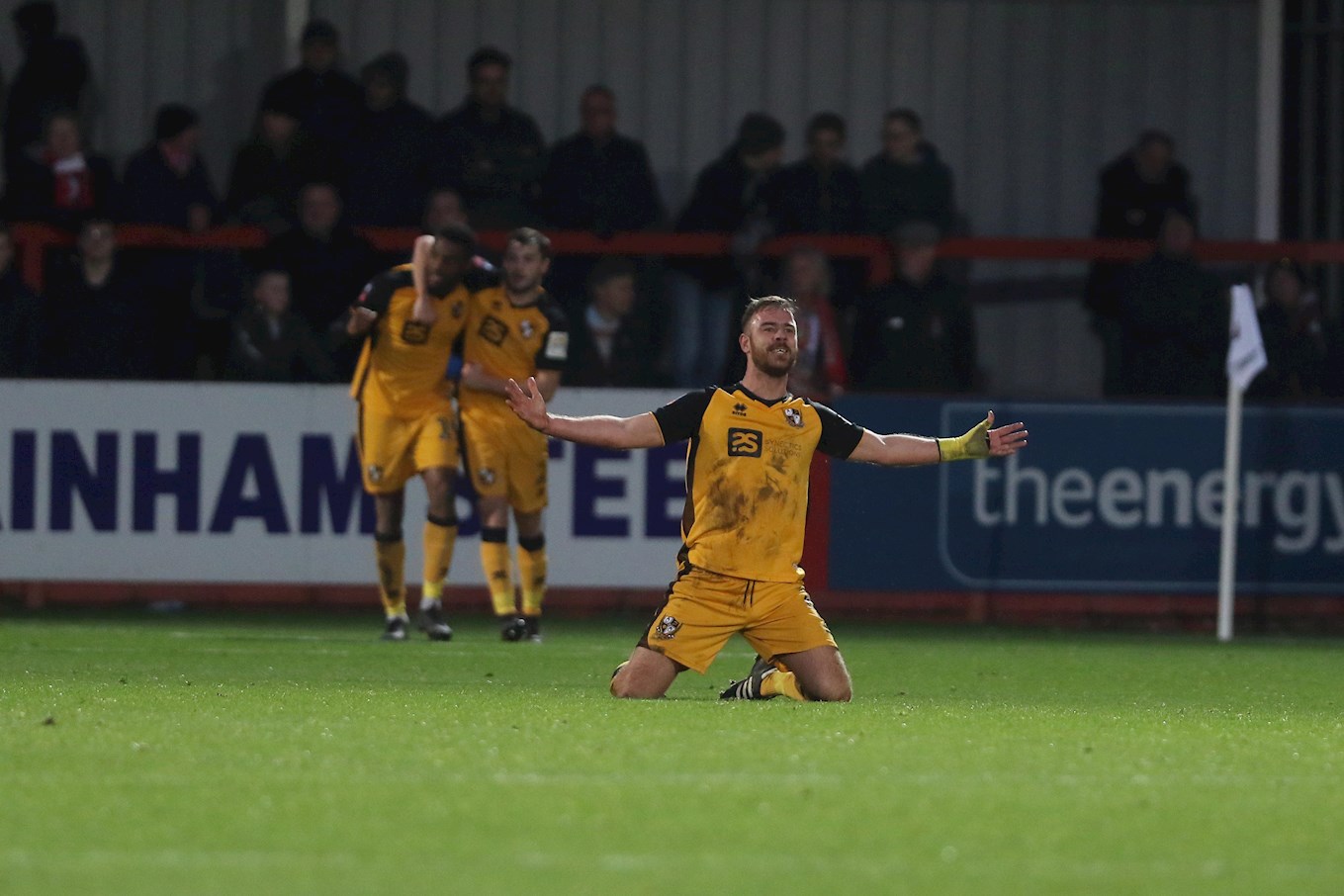 Their midfield boasts the experience of Luke Joyce, while the qualities of David Worrall will be a threat to deal with. Tom Conlon, Scott Burgess and Rhys Browne are others who add a mixture of approaches to their midfield set-up.

Tom Pope's (pictured) hat-trick at the Jonny-Rocks Stadium in the FA Cup meeting earlier in the campaign will make him one to watch out for if selected, though ex-Luton man Mark Cullen's goal scoring threat can't be ruled out too.

The sizeable Richie Bennett can also offer a physical threat, much like Pope, if they elect to use a target man to get balls forward to.

Vale are 13th when it comes to the League Two away form table. Their last away victory was in Gloucestershire when they defeated Forest Green 3-2 on Tuesday 11 February.

It was four days before Christmas the last time Saturday's two teams came head-to-head in the earlier League Two meeting this season.

Jake Doyle-Hayes' terrific forward pass was picked up by Alex Addai, and the speedy attacker slammed in to break the deadlock midway through the first half in Staffordshire. 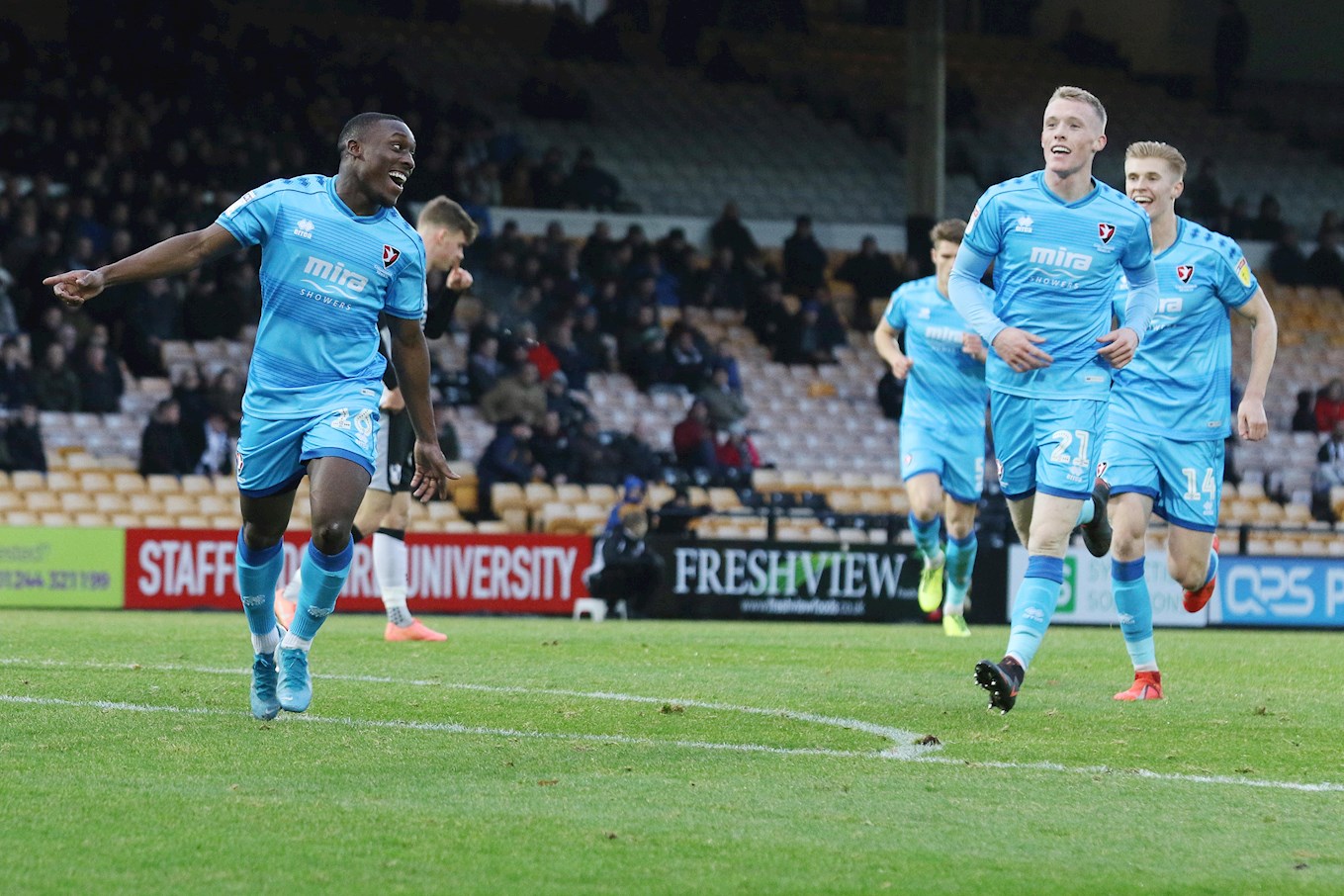 Former Cheltenham goalkeeper Scott Brown denied Addai from netting his and the Robins second, and the one goal margin wasn't enough to seal victory, as shortly before half time Vale levelled.

David Amoo's dangerous low cross from the right was unfortunately put through his own net by captain Ben Tozer and the two goals in the opening 45 minutes were enough to settle the contest as a draw.

Watch the highlights from that meeting back in December below:

Tickets are available to buy online in the lead up to Saturday's match.

They can also be purchased on the turnstiles on the day of the game and the ticket office will also be open from midday. Block 7 will be open for the game.

Supporters can visit the ticket office to purchase away tickets for the match at Cambridge United on Saturday 14 March, and for the game at Forest Green on Saturday 28 March - though only season ticket holders and Travel Club members can buy for this game until Thursday.

The club shop is also open ahead of the game selling merchandise, match programmes and replica kit.

Jonte Smith is the main interview. The forward discusses his return to fitness from a serious illness, his international experiences with Bermuda, his cricket relationship and the hard work he's put in to make it as a professional in the Football League.

There are also interviews with Charlie Raglan and Will Boyle, Lead Youth Development Phase Coach Gerard McGinty and it's the turn of Sean Long to answer the quickfire questions, while Alfie May picks his dream 5-a-side team.

Chairman Andy Wilcox pens his notes ahead of the game, while Michael Duff also has his say with his regular column.

There's also more from the Ladies, the Robins history on this day, a look back at a former player from the past plus much more all packed in for £3 a copy. You can also buy the programme online. 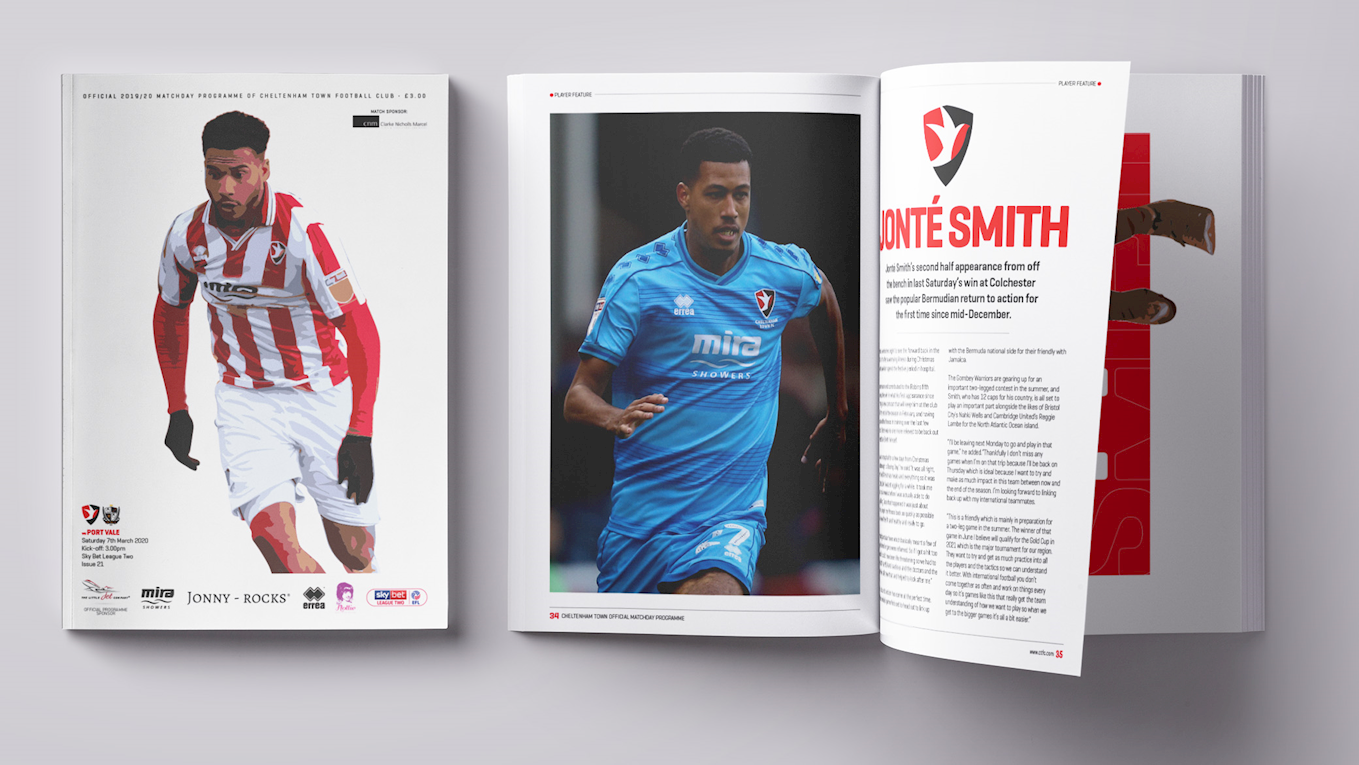 Follow @CTFCofficial on Twitter for team news, live updates, photos from the game and more. You can also keep up to date with the score by visiting the club's Facebook page.

Tune in to hear full match commentary with an audio match pass. Purchase one for £2.50 ahead of kick-off.

Post-match check out the club website to read a match report and hear from Michael Duff on his team's performance.

Highlights will be available on iFollow a few hours after the game.

Cheltenham Town drew 0-0 with promotion rivals Port Vale at the Jonny-Rocks stadium in a high-temper affair in League Two.

The visitors hit the bar and were awarded a penalty by referee Scott Duncan in the first half, only for it to be overturned much to the Vale supporters dismay.

The visitors made a positive start, with a good piece of defending from Charlie Raglan cutting out a dangerous cross from David Amoo in the first minute.

The Robins came back into it five minutes later when Vale ‘keeper Scott Brown was forced to parry a dangerous ball in from Chriss Hussey away from the lurking Alfie May.

But it was Vale who came closest to opening the scoring, David Worrall crossed for Mark Cullen, whose header smacked the face of the bar with Owen Evans well beaten.

A lively start continued when May had a great chance of his own, lifting the ball over the ‘keeper with a delicate lob only for it to be cleared off the line.

May was again in with a chance of opening the scoring, after arriving at the far post to meet Sean Long’s whipped cross, but he couldn’t make contact only a few yards from goal.

The bright start fizzled out somewhat and Tom Conlon could only fire a tame effort at Evans on a dangerous counter-attack. 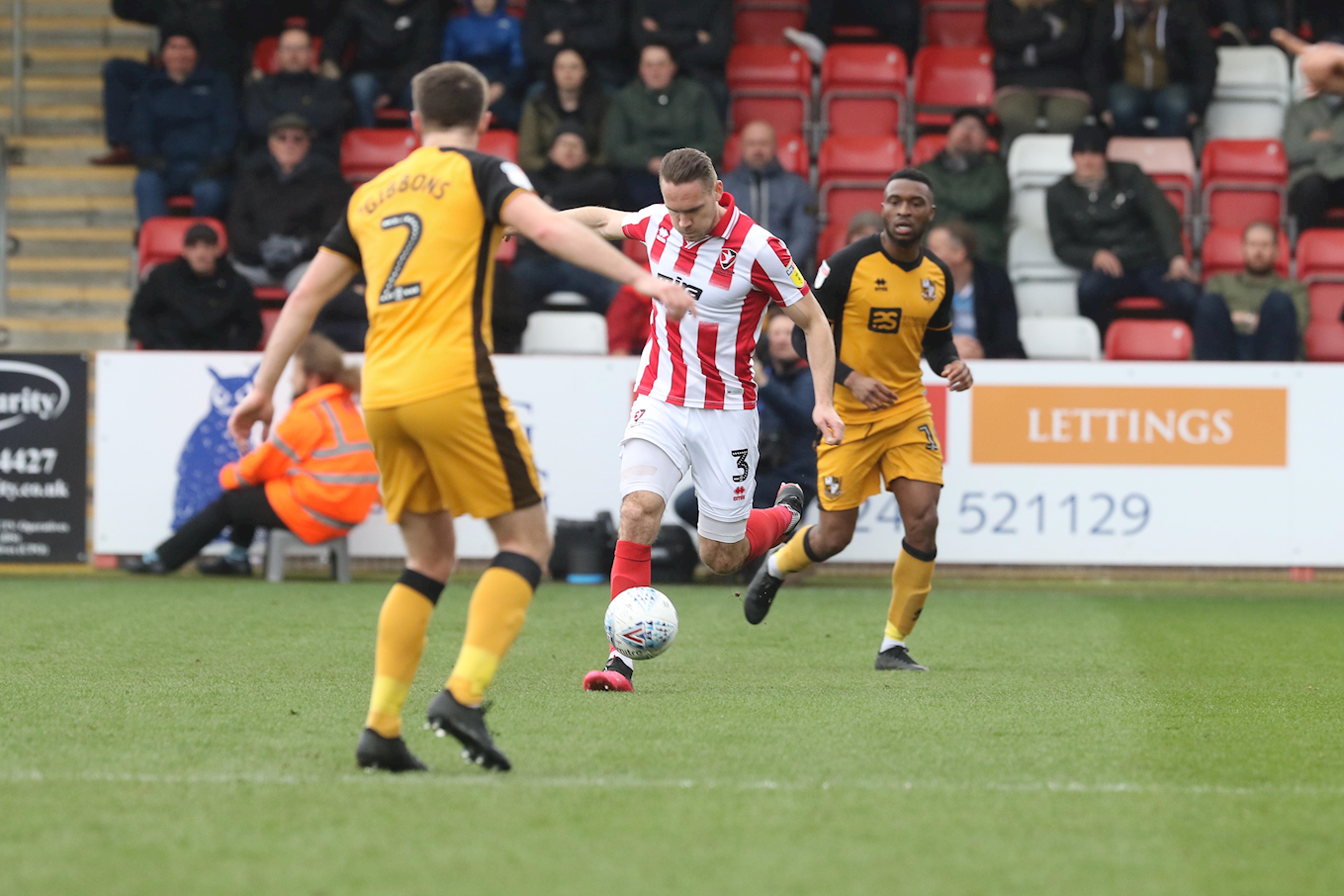 The Valiants thought they had a penalty when Charlie Raglan brought down Worrall with a clean tackle, and after consulting with the linesman, Scott Duncan overturned his original decision.

Cullen went close again early in the second half, but after nodding Amoo’s cross goal-bound, Evans was there to save it.

Just past the hour mark Vale missed a great chance to go in front. Conlon’s lovely ball over the top put Amoo one-on-one, but the dangerous front man saw his low drive whistle just wide of the left-hand post.

A dangerous Robins attack almost broke the deadlock late on, Broom had a shot blocked before the ball fell to May, who twisted and turned before seeing his shot roll wide for a corner.

Substitute Jonte Smith had a golden chance with five minutes to go, the ball falling to him after Will Boyle knocked it on from the corner, however the striker could only turn it wide well inside the six-yard area.

Tickets for Saturday's upcoming match with Port Vale at the Jonny-Rocks Stadium are available to buy online in advance of the weekend.

It's a fourth against seventh clash, which gets underway at 3pm, as Cheltenham again look to secure another winning result having made it five straight wins on Saturday at Colchester.

Three points in Essex have continued Michael Duff's men's impressive run of form, and the Robins are now up to fourth in League Two.

Buy tickets for Saturday's match with Port Vale online ahead of the weekend.

They are also available to purchase in advance from the ticket office on Tuesday, Thursday and Friday this week between 10am and 3pm.

The ticket office is also selling tickets for the upcoming away fixture at Cambridge United on Saturday 14 March this week.