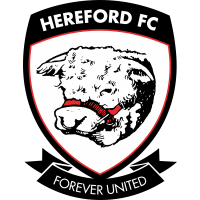 The Robins step up their pre-season preparations another level this evening with a trip to Hereford for the club's second pre-season friendly (kick-off: 7.45pm).

Southern Premier Central Stratford Town were the opponents on Saturday, and it's up another level to National League North Hereford who will pose the Robins latest challenge this evening.

Michael Duff will use it as another opportunity to give his full squad a run out in what is a busy week of pre-season fixtures, with a trip to Taunton in the offing on Friday as well as a home clash with Premier League Leicester City on Saturday.

Kick-off at Edgar Street this evening is at 7.45pm and tickets are available to buy in advance and from the ticket office at Hereford, which closes 15 minutes before kick-off.

Reuben Reid continues to miss out having now had surgery on his knee injury. Chris Hussey may also not feature as he continues to nurse a knock.

Summer arrival Dan Bowry may feature through after not playing against Stratford.

Tonight's fixture will be Hereford's fifth pre-season game of the summer. They've already taken on Wellington and Cinderford Town, while in a training camp down in Devon also played Yeovil Town and Bideford.

They are preparing for their second consecutive National League North campaign having ended last season 17th in the division. Since reforming as a new club away from the former Hereford United side that spent so long in the Football League, the Bulls have enjoyed three promotions in four seasons from the Midland Premier League.

Under the management of Head Coach Marc Richards, and Director of Football Tim Harris - who are both former Cheltenham players - they have recruited well ahead of the upcoming season.

Former England C shot-stopper Brandon Hall can be called upon as a new face in between the sticks, adding to a group of players that already included ex-Grimsby Town centre back Josh Gowling and former Newport County midfield duo Tommy O'Sullivan and Tom Owen-Evans.

There are a number of former Robins in the Bulls squad. Centre back Martin Riley spent the 2010-11 season at the Jonny-Rocks Stadium and has moved to Hereford this summer.

Kieron Thomas is an under-18s graduate who has been at Hereford following spells at Cinderford and Gloucester City in between.

Welshman Eliot Richards is another former Cheltenham face on their roster.

From a Cheltenham perspective, George Lloyd spent time on loan on two occasions last season with Hereford, either side of Christmas.

Hereford operate cashless turnstiles so tickets must be bought from the ticket office, which closes 15 minutes before kick-off.

You can also purchase your match tickets online by clicking here.

They are priced at:

Cheltenham fans will be located in Block E of the Len Weston Stand and the terrace underneath.

Supporters using wheelchairs need to book into a dedicated spacing at the earliest possible opportunity by calling the club office on 01432 268257.

Keep up with the action at Edgar Street on social media by following @CTFCofficial on Twitter, and for updates on the club's Facebook page too.

Post-match you can read a report from the game and check out the reaction from the squad on the club website.

Cheltenham Town had to settle for a draw in their second pre-season match ahead of 2019/20 as Hereford FC twice came from behind in a 2-2 stalemate at Edgar Street.

Will Boyle and George Lloyd both netted in the first half for the Robins either side of a Reece Styche goal for the hosts but a 53rd minute header from Jordan Cullinane-Liburd proved to be the final goal in a well-fought contest.

Manager Michael Duff started with most of the team that finished the game against Stratford Town in their first pre-season friendly at the weekend, with trialist Reece Cole and youth team defender Grant Horton included from the off.

Scott Flinders was called into action inside the third minute as Jordan Nicholson was set up for a strike just inside the penalty box after good work from Styche.

Recovering from a shaky start at the back, Cheltenham threatened with two successive corners as Ben Tozer twice headed wide – the second of which he was left unmarked from Cole’s delivery.

Bulls’ keeper Brandon Hall’s then made an impressive save to deny Luke Varney after Boyle kept the ball alive from a set-piece and Ryan Broom put a teasing cross into the penalty area.

At the other end, Flinders made a routine save in denying Rowan Liburd from a tight angle as the match ticked over to the 15-minute mark.

Duff’s side did make their next corner count though as Cole’s low delivery in the 19th minute caused problems for the home defence and although both Varney and Tozer failed to control the ball, Boyle found space to fire into the back of the net with his favoured left foot.

Cheltenham were starting to play with more confidence after the goal as Chris Clements set Josh Debayo away down the left flank and Varney swivelled to shoot just wide of the target.

The Bulls did break away in the 32nd minute and Liburd took the ball around Flinders but youngster Horton, who was playing well on the right of a back three, cleared just in front of the goal-line as Liburd’s final effort lacked power.

Varney then very nearly finished a slick move through the middle of the pitch as Tozer lofted a pass into Cole, who then volleyed into the path of the 36-year-old, but his shot narrowly missed the target again.

Hereford equalised four minutes before the break though as well-travelled forward Styche advanced in on goal and coolly chipped over Flinders to bring the Vanarama National League North outfit level – but not for long.

Duff’s side restored their lead right at the end of the half as former Bulls’ loanee Lloyd tapped into an empty net after Clements and Varney were denied by Hall.

Jordan Cullinane-Liburd headed a cross over the bar shortly after the interval, but he scored with his next attempt, nodding in a corner at the back post as Cheltenham left him unmarked in the 53rd minute as Hereford drew level again.

Duff made a further six changes in the 66th minute and Jacob Jagger-Cane came close to putting Marc Richards’ side into the lead for the first time shortly afterwards, slicing wide and Styche the hit the post with a spectacular swerving effort minutes later.

The visitors found chances few and far between in the second half but Rohan Ince came close to setting Tahvon Campbell away and Alex Addai had the ball in the net after a clever move, but it was flagged offside as the match finished level ahead of Cheltenham’s next friendly at home to Premier League side Leicester City.

A busy week of pre-season friendlies starts at Hereford's Edgar Street on Wednesday as Cheltenham travel to the National League North outfit for a second run out in pre-season.

Southern Premier Central side Stratford Town hosted the Robins on Saturday in the club's first friendly ahead of the new campaign, and it'll be a step up a division on Wednesday when Hereford are the opponents. Kick-off is at 7.45pm.

Ticket prices for the match have been confirmed. They are as follows:

Cheltenham fans will be located in Block E of the Len Weston Stand and the terrace underneath.

Supporters using wheelchairs need to book into a dedicated spacing at the earliest possible opportunity by calling the club office on 01432 268257.