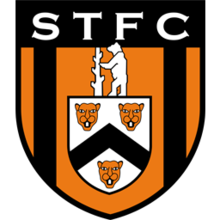 Michael Duff's side will enjoy their first run out ahead of the 2019/20 League Two campaign in what marks the first of seven warm up games for his squad.

The team have been hard at work at the Energy Check Training Ground since returning to training at the end of June. This weekend's match offers them their first opportunity to get out on the grass in more competitive circumstances against a side who have already been busy in pre-season action.

Reuben Reid misses out with a knee problem that requires surgery, but the other new faces who have joined the club this summer are all set to be involved, including Rohan Ince, Tahvon Campbell and Dan Bowry.

There are also set to be a couple of trialists involved, while first year professional Archie Brennan will also line up as part of the squad.

Stratford enjoyed one of the best seasons in their history last year. They reached the Southern Premier Central play-offs, bowing out at the semi-final stage to Kings Lynn Town, and were also crowned Southern League Cup winners after a 1-0 final win over Gloucestershire side Cinderford Town.

The man at the helm of their success last season, Thomas Baillie, has since moved onto Tamworth. They've appointed Tommy Wright as manager for the season ahead and overseeing the management structure at the Arden Garages Stadium is former Cheltenham man Paul Collicutt.

Their squad includes a number of new signings including ex-Coventry City defender Reece Ford and another former Sky Blues man in the shape of Ivor Lawton.

The Southern Premier Central is three divisions below League Two and opponents for them this season include AFC Rushden & Diamonds, Nuneaton Borough, Tamworth and Redditch United.

Tickets are available on the turnstiles for Saturday's game. Prices are as follows:

After the match visit the website to read a report and for full reaction from inside the camp to the opening fixture.

Luke Varney came off the bench to find the net in a 90 minutes that saw Michael Duff's side use 20 different players in their opening run out in the build up to the new League Two campaign.

There were opportunities for the fans who made the trip to watch Rohan Ince and Tahvon Campbell in action for the first time, while trialists Kyle Rowley and Reece Cole were handed trial opportunities.

And it was Cole who forced the first opportunity of the game on five minutes when his shot from 25 yards was saved by Elliott Taylor.

Academy second year Grant Horton then sent Campbell through minutes later with a fine forward ball, and the summer arrival saw his lobbed attempt clip the top of the bar.

Stratford, who reached the Southern Premier play-offs last season, nosed in front however midway through the half.

Nabil Shariff did well to force his way into the box and unleashed a powerful strike that flew across goal and into the back of the net. 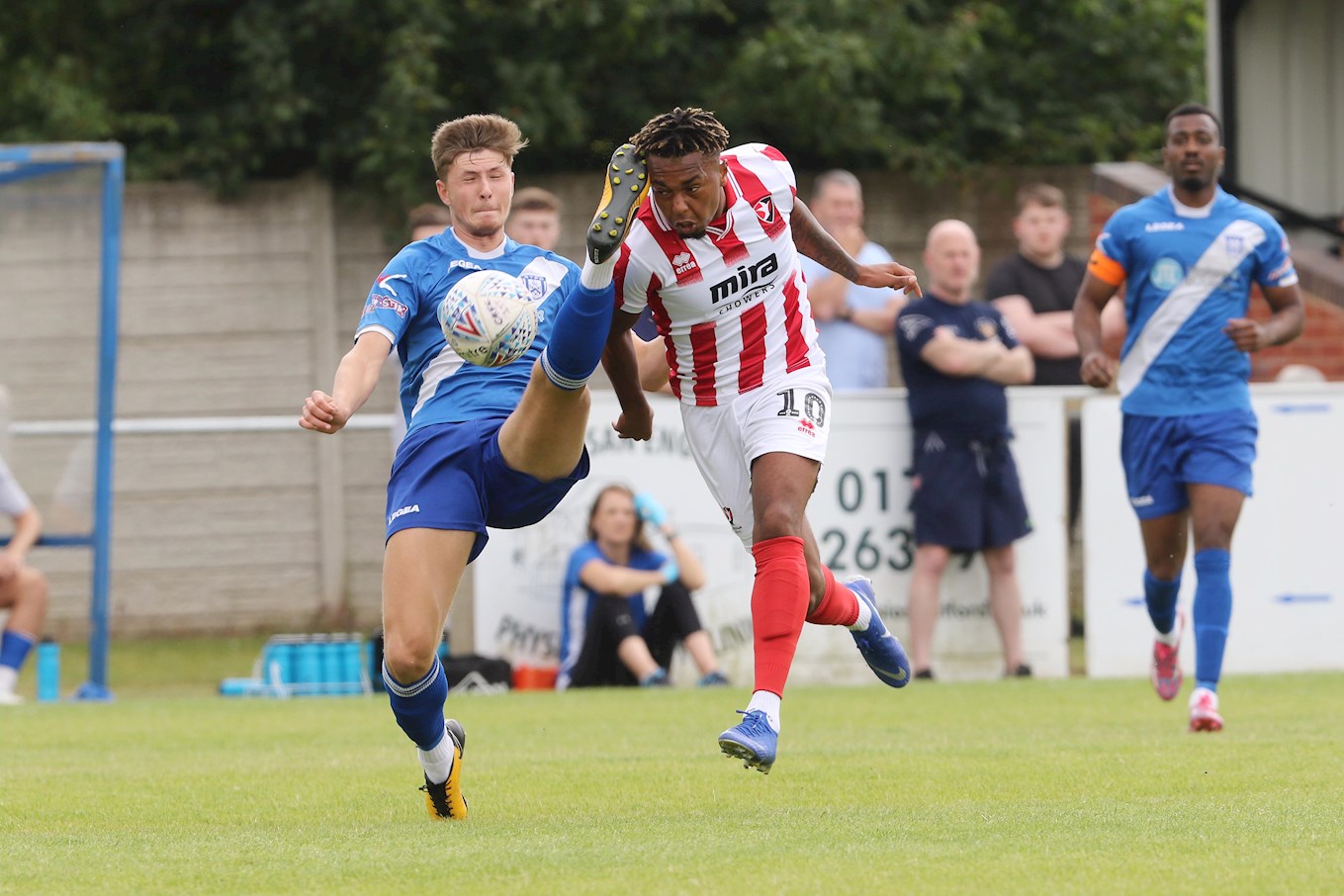 Cheltenham looked to level from a Chris Clements free kick on 32 minutes that was saved well by Taylor, who was busy again shortly after to keep out a Campbell strike after Ince had steered an eye-catching ball into the strikers path.

The final chance of the first half saw Rhys Lovett make an excellently timed smothering save to deny Joel Gyasi who had found space in the box.

Clements produced the first effort of the second half only to see his shot saved, while Lovett used his feet to deny Kynan Isaac after the powerful left sider had broken through.

A raft of changes on 61 minutes saw the Robins bring on eight new faces, and although Varney had the ball in the back of the net shortly after only to see it disallowed, it would be the hosts who would double their advantage on 76 minutes.

Louis Morrison rose highest from a set piece to head in to install some daylight between the two sides. 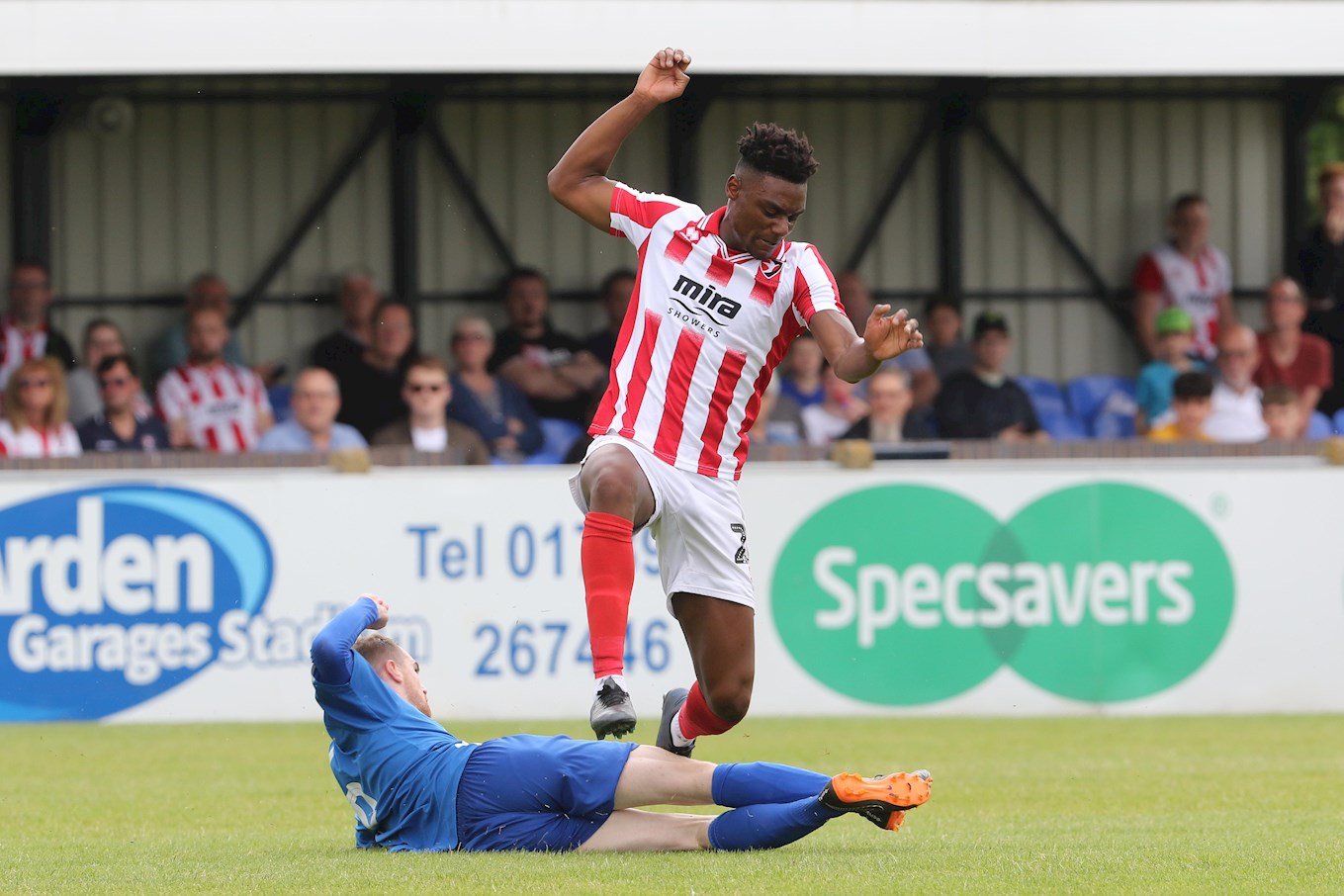 Late urgency saw Cheltenham look to force their way back into the game. Ryan Broom supplied a cross for Varney that bounced over after hitting the ground.

The experienced forward did find the net though shortly after when good work by George Lloyd saw the ball eventually find Varney in the box, and he had time to pick his spot and halve the scoreline.

Lloyd could have almost nicked a draw late on, however his close range header from a Conor Thomas corner was snatched out of the air by Stratford replacement goalkeeper Sam Lomax.

Kick-off at the Arden Garages Stadium is at 3pm as Michael Duff's side have their first run out ahead of a busy pre-season calendar in the build up to the season kick-off on 3 August.

Ticket prices for the game have been confirmed:

The Robins are also set to take on Hereford, Taunton, Leicester City, Shrewsbury Town, Burnley under-23s and Bromsgrove Sporting in warm up games before starting the campaign at newly promoted Leyton Orient.

Keep an eye out on the club website for a preview looking at Saturday's opening pre-season game.