The Jonny-Rocks Stadium plays hosts to its first match of the year and the new decade on Saturday when Oldham Athletic are the opponents (kick-off: 3pm).

Michael Duff's Cheltenham side saw in 2020 with a late point on the road at Newport County AFC on New Year's Day.

And now he will take his troops into battle on home turf for the first time since after the Christmas period as Oldham visit.

Tickets for the game are on sale online and will also be available to buy at the turnstiles on matchday.

New signing Alfie May is expected to make his debut after completing his transfer from Doncaster Rovers.

Jonte Smith is back in training so could feature after a recent illness. Luke Varney and Reuben Reid are both out though.

Watch what assistant manager Russell Milton had to say before the game:

New signing Alfie May trained with his new colleagues for the first time today. Take a look at his first session from The Energy Check Training Ground:

It was a mixed Christmas period for Oldham. They secured back-to-back wins over Crawley Town and then Morecambe on Boxing Day, but saw their final game of 2019 and New Year's Day matches against Salford City and Scunthorpe United end in losses.

Their squad boasts plenty of higher level experience, as well as a range of nationalities, while manager Dino Maamria is himself Tunisian. It'll be the third time he's lined up against the Robins as a manager this season having taken charge of Stevenage earlier in the campaign and once with the Latics a short time after he was appointed.

In front of him the presence of former Middlesbrough and Bolton Wanderers central defender David Wheater offers plenty of experience while the likes of Alex Iacovitti, Zak Mills, and youth team product Tom Hamer are other likely starters in their backline. 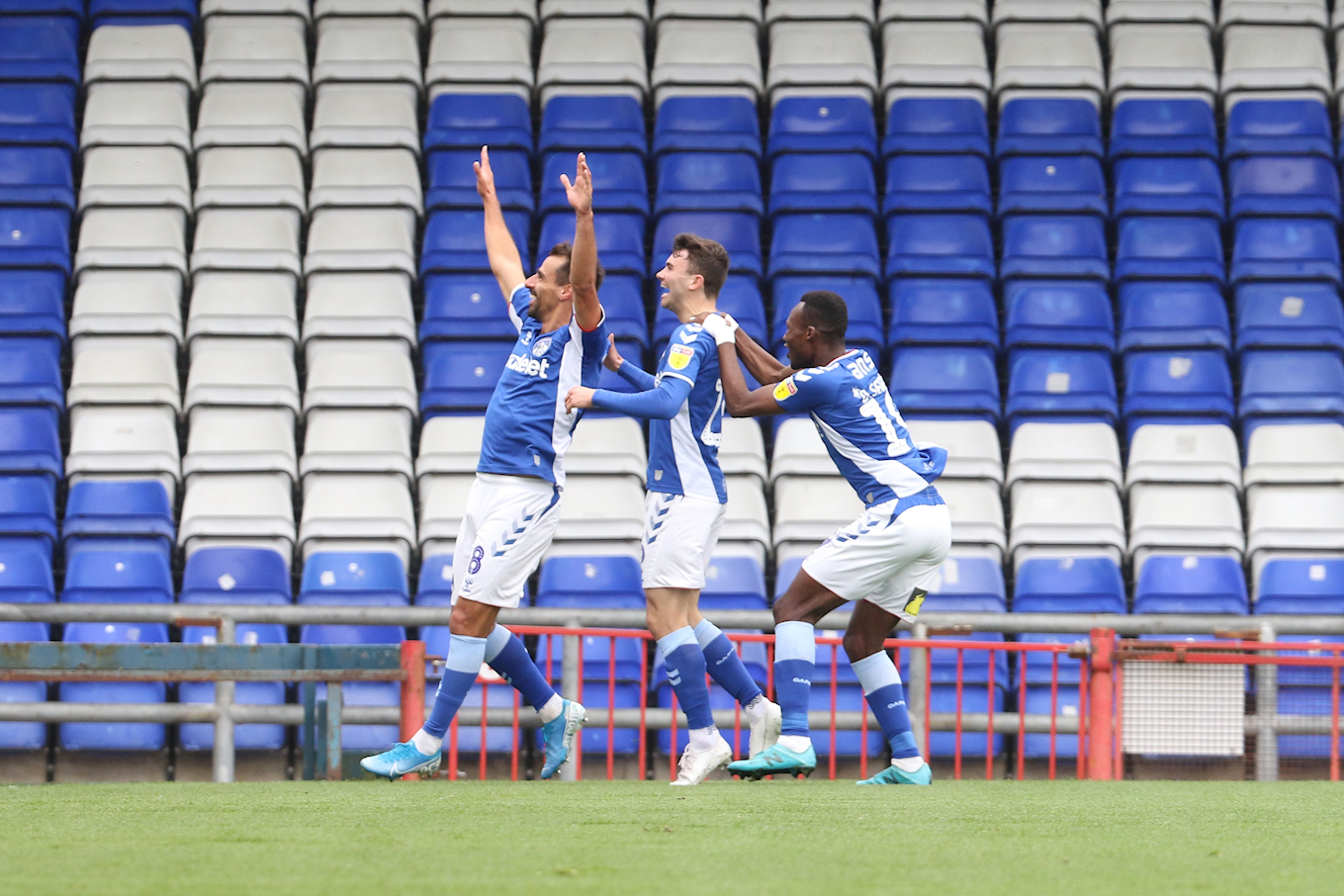 They have already moved to bolster their midfield department now the transfer window has opened. Christian N'Guessan has joined on loan from Burnley, while existing player Gevaro Nepomuceno has returned to their set-up after completing a recent loan period at National League strugglers Chesterfield.

Mohamed Sylla provides plenty of drive in the middle of the pitch, while another experienced former top flight recruit in the shape of ex-Burnley and Wolves midfielder David Jones joins another former Burnley man in the shape of former Manchester United youngster Chris Eagles. Jonny Smith and Filipe Morais are others who add quality and knowhow of League Two to this area of the pitch.

In attack Beninese international Désiré Segbé Azankpo is one to look out for. The much travelled Jean-Louis Akpa Akpro is a recent arrival, while ex-Gloucester and Cinderford Town front man Scott Wilson has an eye for goal having spent last season in the division at Macclesfield.

Oldham are positioned 20th in the league heading into Saturday and have taken 12 points on the road from 11 away matches this season.

It was the beginning of October when the two teams last met earlier this season.

Former Robins winger Jonny Smith set up Filipe Morais to drive the Latics in front in the first half at Boundary Park. 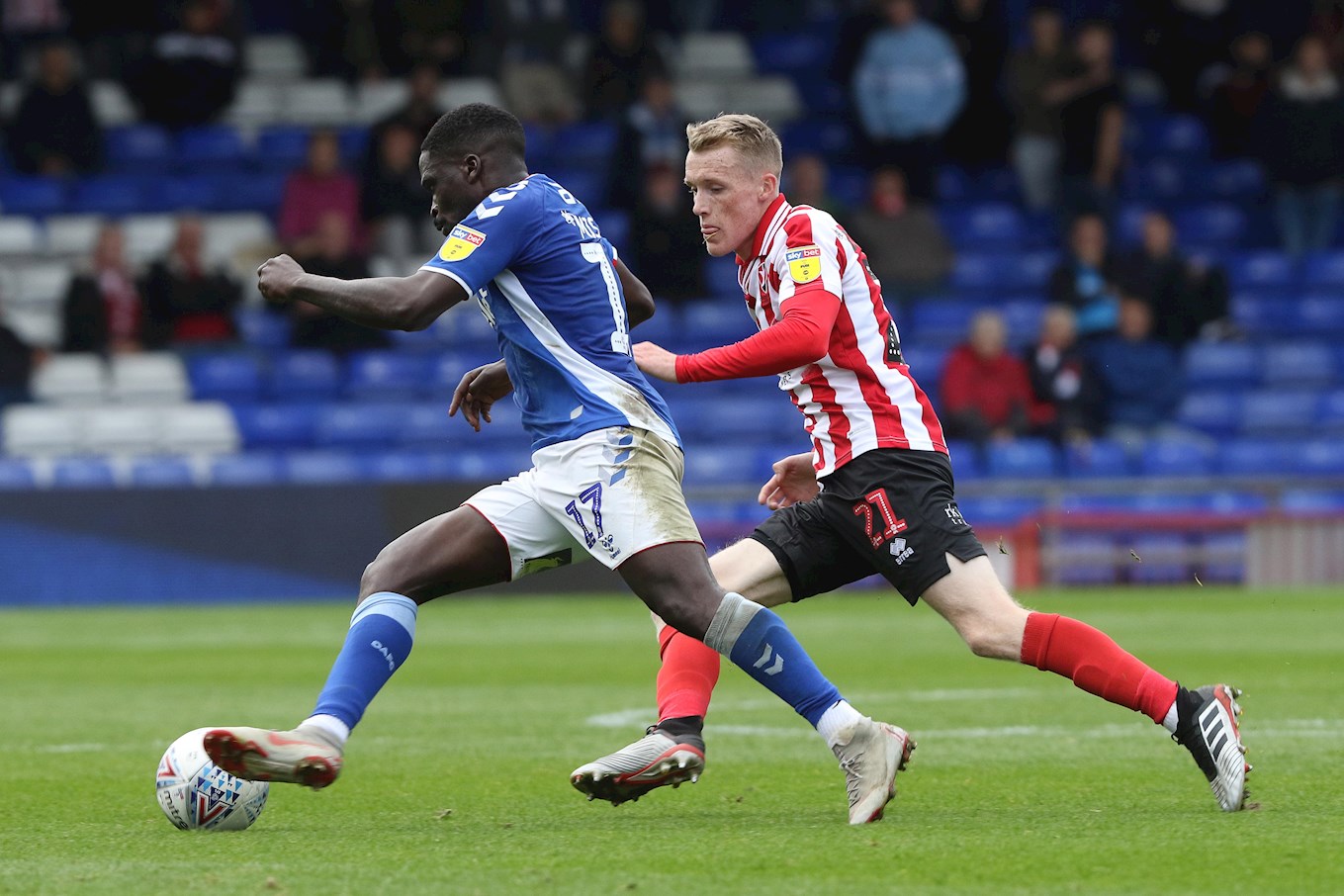 Cheltenham earned something from the game though when Conor Thomas collected Chris Hussey's cross on the right-hand side and set-up Ryan Broom to finish confidently inside the box to draw parity.

Watch the highlights back from that away trip earlier this season:

Buy online ahead of Saturday with tickets also available on the turnstiles in all areas of the stadium.

The ticket office will be open ahead of kick-off selling tickets for upcoming matches, including the home clash with Walsall on Saturday 11 January.

From midday the club shop will also be open selling merchandise and copies of the match programme.

George Lloyd features as the big interview in Saturday's programme. The academy graduate discusses how he's found leading the attack in League Two over Christmas, how he's still young in the professional game while trying to make an impact and how influential training as a gymnast from the age of six has been on him making it professionally.

There's also an interview with Ben Tozer after the captain scored the first goal of 2020 on New Year's Day. Tozer also answers the quickfire questions while Will Boyle picks his dream 5-a-side team from former teammates.

On top of that there's an update from the chairman, the latest from Michael Duff, a look back at the club's history on 4 January, an interview with Ladies boss Alex Cheal looking ahead to 2020, under-18s manager Pete Haynes provides an update from his team plus much more.

The programme is on sale around the stadium and in the club shop at a price of £3. 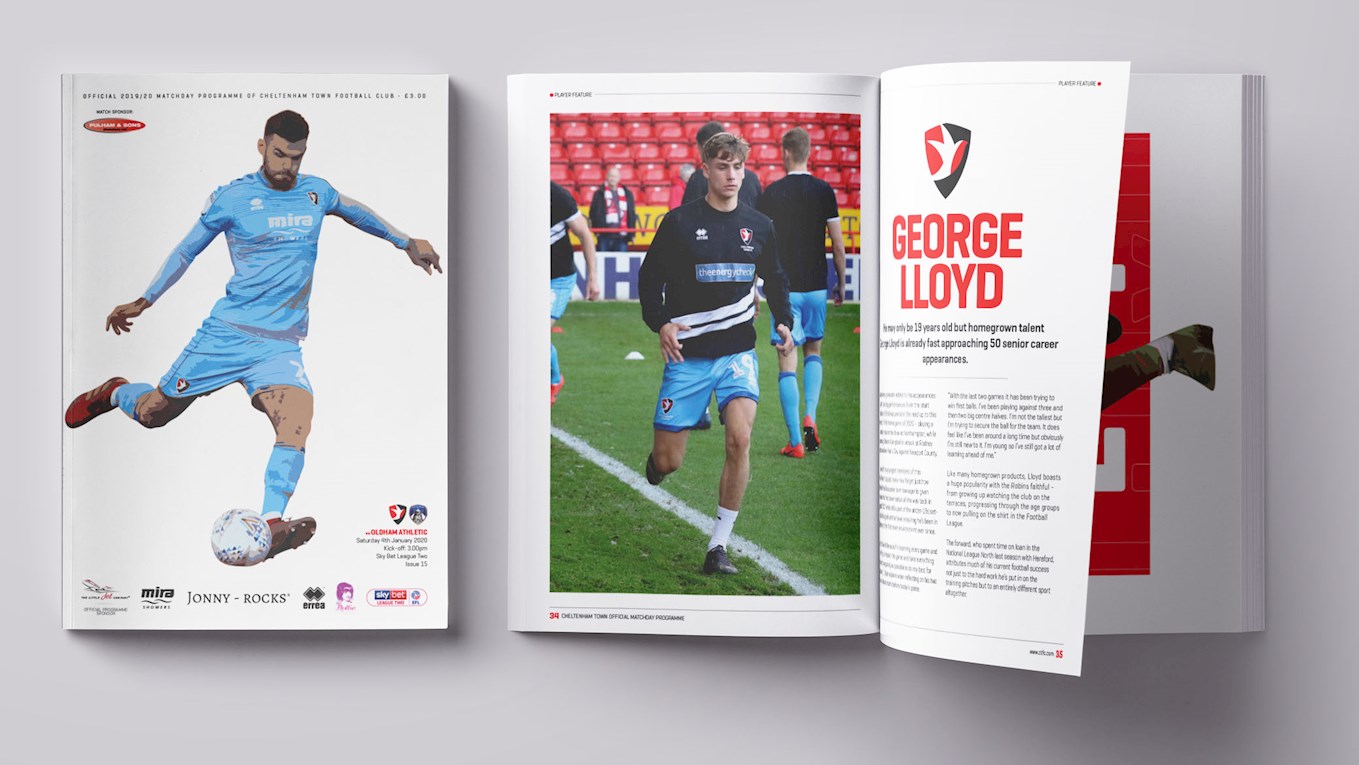 After the game check out the club website to read a match report and see reaction from inside the camp to the full time result.

Highlights will be available on iFollow and the club's YouTube channel from midnight.

Debutant Alfie May marked his first start in Cheltenham Town colours with a goal in a welcome win at the Jonny-Rocks Stadium.

It wasn’t a classic strike by any means, not that the former Doncaster Rovers man will care, but it helped his new side notch maximum points for only the second time in 11 league matches.

Max Sheaf returned to the side and opened the scoring with his first league goal to hand Duff’s side a narrow advantage at the break.

May doubled the advantage with 14 minutes remaining and Ryan Broom put the seal on the win deep into injury time.

The only negative on the day was a serious looking injury to Scott Flinders, who was carried off on a stretcher in the second half.

Duff made three changes to his side in total. Out went Sean Long, Will Boyle and George Lloyd and in came Sheaf, Chris Clements and new signing May, who joined the club only yesterday.

There was little to report at the mid-way point of the first period but the Robins began to get foothold in the game with the half-hour mark approaching and produced the first chance of the contest.

Sheaf though put the Robins in front with 32 minutes on the clock after Campbell had made the byline down the left and cut one back into his path, leaving the Hull City loanee with the simple task of picking his spot from 12 yards. 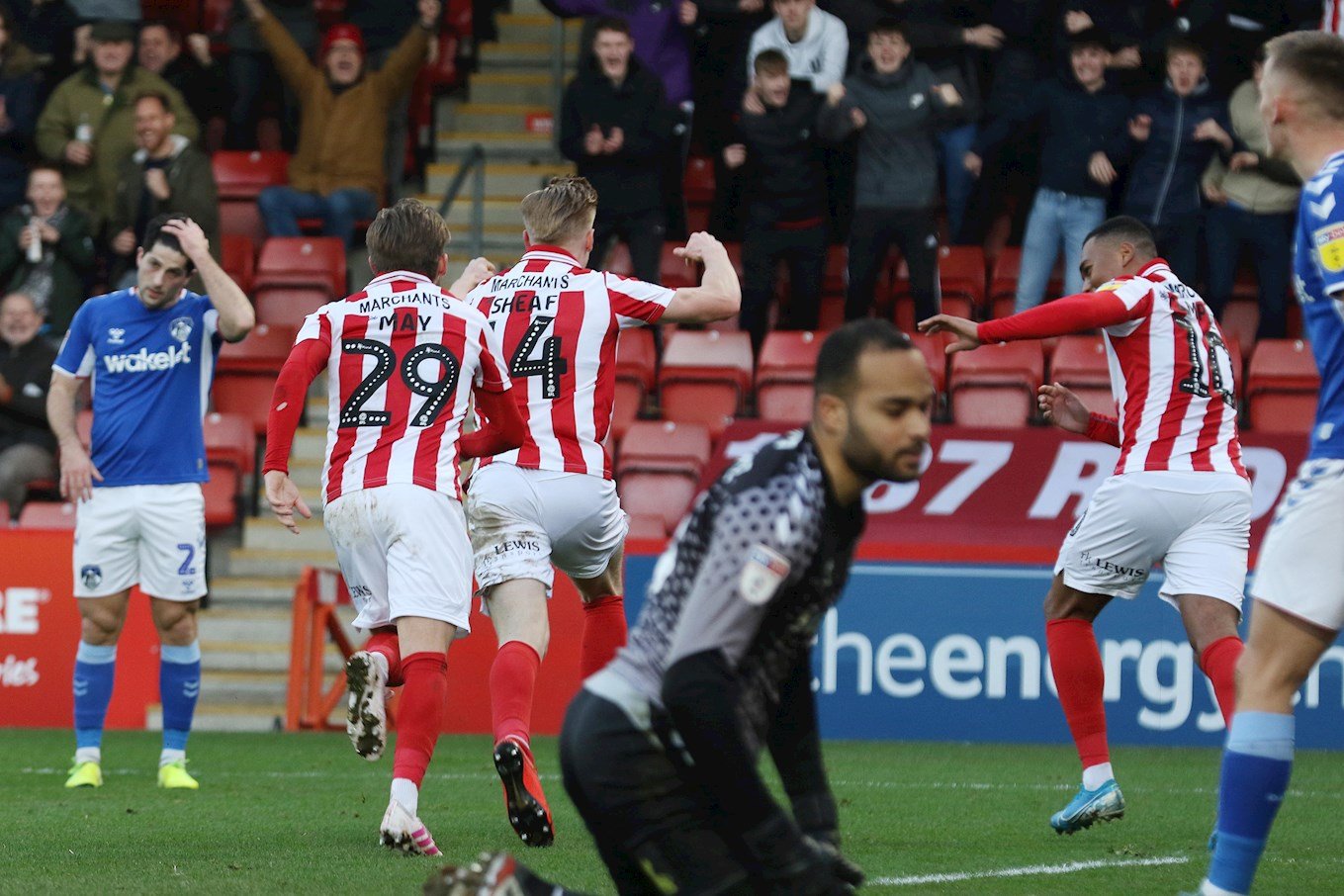 Debutant May had the ball in the back of the net with the interval approaching but the referee chalked it off for an infringement.

Sheaf almost added a second within seconds of the restart but his shot from distance dipped wide while Campbell was put through by the goalscorer but Zeus de la Paz did enough to block the chance.

There was a blow in the 57th minute when Flinders was injured while rushing from his line to prevent striker Scott Wilson reaching a ball and was subsequently replaced by Rhys Lovett after five minutes of treatment.

Oldham responded to the setback by replacing centre half Alex Iacovitti with former Manchester United and Burnley attacker Chris Eagles.

But it was Cheltenham with the next goal, and May who netted his first for the club.

Lovett was called into a fine stop at full stretch to deny Eagles from distance with ten minutes remaining.

Broom, who was found by substitute Long, put the seal on victory with a great finish from the right, deep into injury time.

The Jonny-Rocks Stadium hosts its first football of the decade on Saturday when Oldham Athletic are the visitors.

After back-to-back away matches in League Two Michael Duff's Cheltenham side welcome the Latics on Saturday for a 3pm kick-off.

It will be the second game against Oldham this season. A meeting back at the start of October ended in a 1-1 draw thanks to Ryan Broom's second half strike.

The ticket office is open on Thursday and Friday selling tickets for the game. You can pop in to buy in person, or call, between 10am and 3pm.

It's also possible to buy online for the fixture online at any time.