The first of two long away trips in the space of four days sees Cheltenham Town travel to Scunthorpe United on Saturday (kick-off: 3pm).

It's a visit to Lincolnshire this weekend and then a long trip to Cumbria to take on Carlisle United on Tuesday night.

But all of the focus is on matters on Saturday at The Sands Venue Stadium as Michael Duff's team look to keep up the pace in the top seven of League Two.

Scunthorpe are eager to record a win at home, but the Robins will be head there looking to build on the 1-1 draw last time on their travels at Bradford City.

Conor Thomas is looking to be involved after going off injured in last week's win against Morecambe. Fellow midfielder Chris Clements is unlikely to feature because of a recent illness.

Scott Flinders long-term leg injury rules him out. George Lloyd is also facing a fight to be fit.

Midfielder Ryan Broom returned from injury last time out. He has been previewing the trip too.

Any ambitions to bounce back into League One at the first attempt appear to be growing less likely for Saturday's opponents after a sticky patch in League Two which hasn't seen them win in the division since New Year's Day.

They are managerless going into Saturday's contest. Former boss Russ Wilcox is back in charge but Paul Hurst left the club at the end of January.

Their last win came in the Leasing.com Trophy against Manchester City's under-21s, while they've not won at home in the league since a 23 November victory over Port Vale.

They bolstered their squad with the signings of 23-year-old Devarn Green from Southport and Middlesbrough youngster Ben Liddle on a loan deal at the end of the transfer window. Jordan Gabriel has also arrived on loan from Nottingham Forest with goalkeeper Ian Lawlor arriving on a loan deal from Doncaster Rovers. 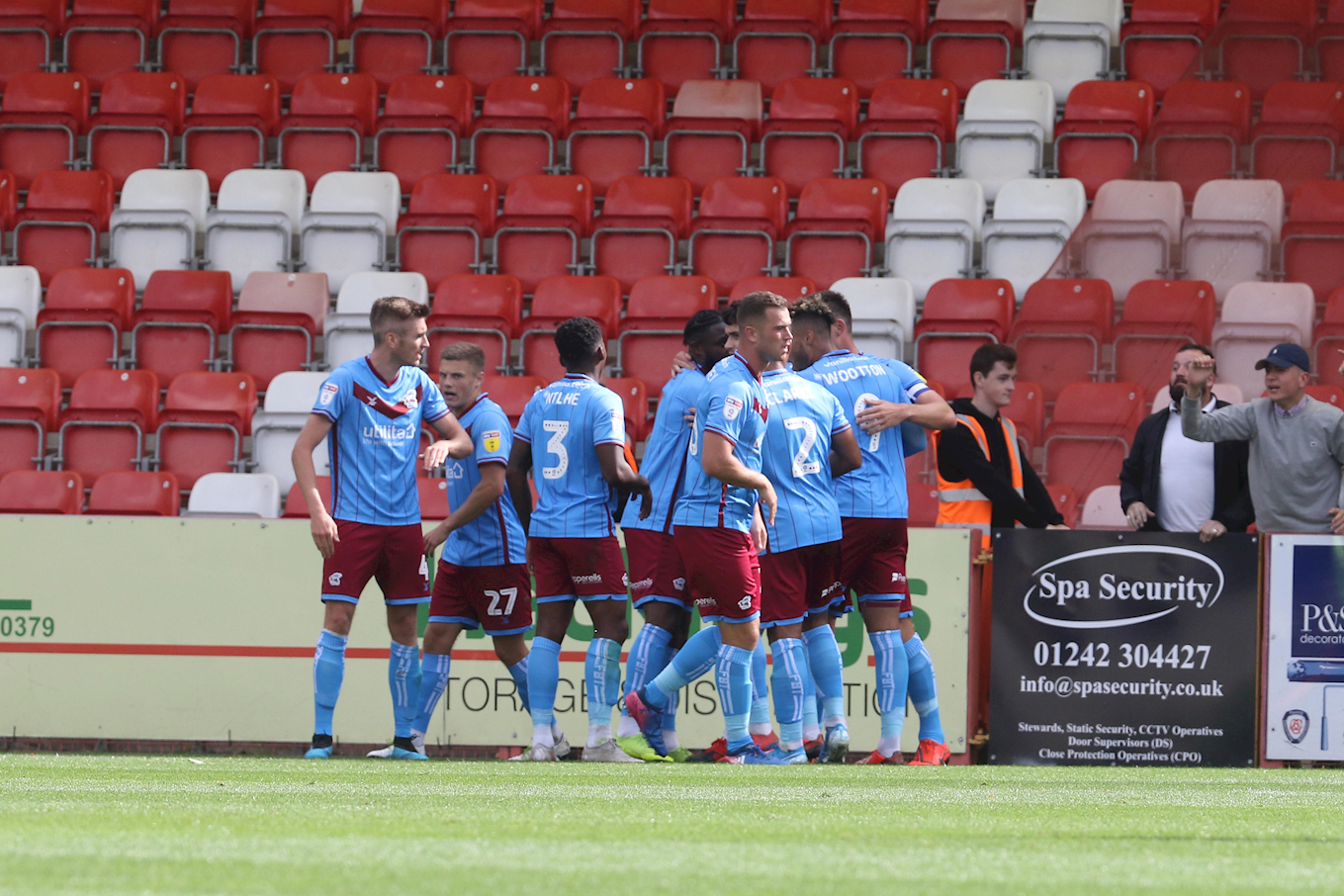 Lawlor was in goal for their defeat at Crawley Town last time out. That day the long serving Andy Butler, 20-year-old Jacob Bedeau and ex-Newcastle United man James Perch were defensive bodies in their line-up that could feature again on Saturday.

In their midfield youth product Levi Sutton is a homegrown talent to keep an eye on. Ex-Shrewsbury Town man Alex Gilliead may be involved, while former Crewe Alexandra youngster Ryan Colclough offers an attacking drive to their armoury as well.

Dutchman Kevin Van Veen is their leading goal scorer and is likely to lead their attack. He has ten goals to his name this term with Abo Eisa, the brother of former Cheltenham forward Mo, having netted five times himself.

A number of their other attacking bodies could see them turn to John McAtee, with George Miller, who is on loan from Barnsley, an option for them to look at too.

You have to go all the way back to the first home match of the season for the last time Saturday's two teams played each other.

That day Cheltenham followed up a narrow opening day defeat to Leyton Orient with a 4-1 win.

All five goals came in the second half with Scunthorpe opening the scoring ten minutes after the interval through Lee Novak. 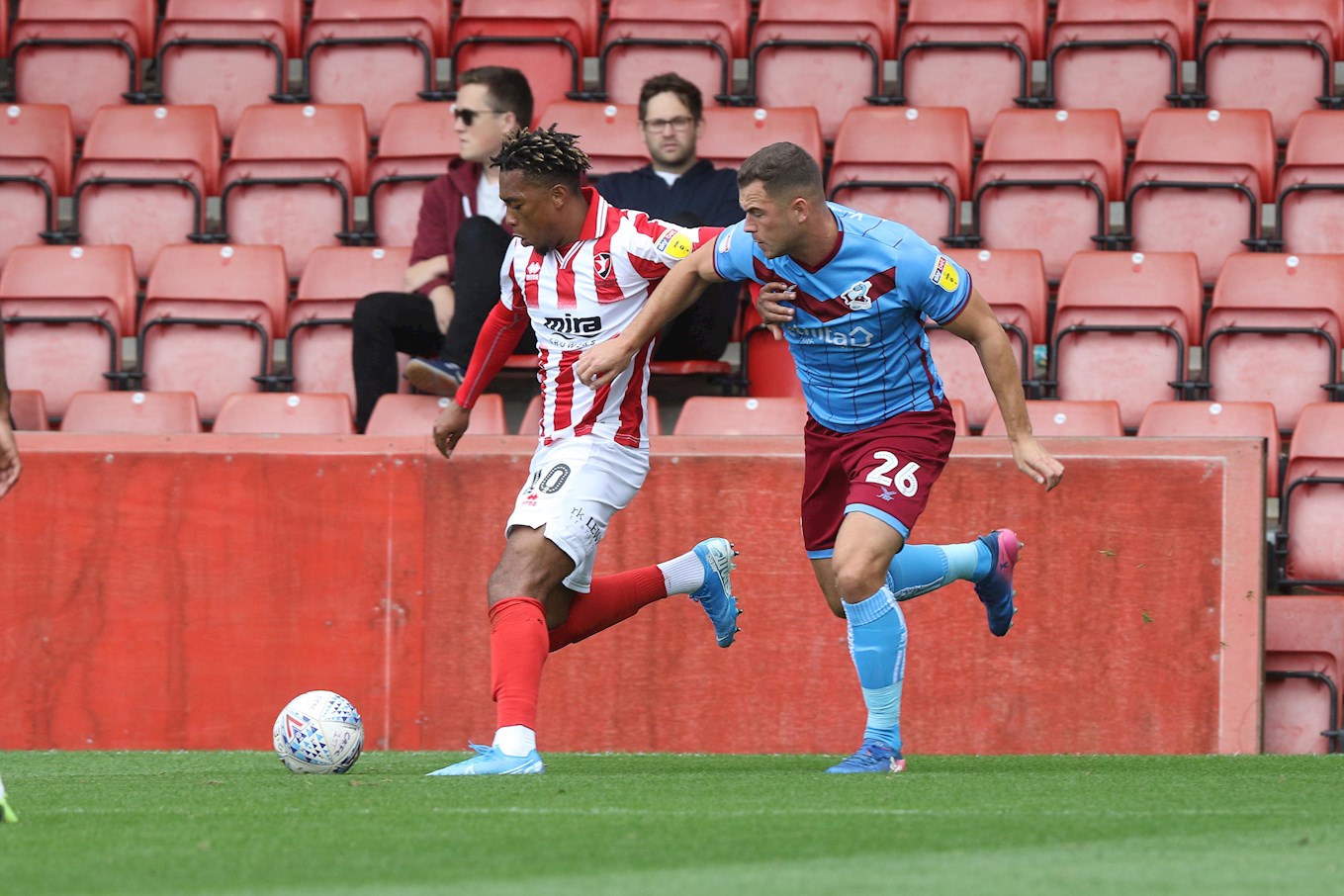 Ryan Broom levelled on 68 minutes, and Charlie Raglan made it 2-1 three minutes later. Two minutes after that Alex Addai installed some daylight when he made it 3-1.

Cheltenham's fourth goal came through Conor Thomas with the midfielder showing his impressive ability from the penalty spot again to make it 4-1 in stoppage time.

Watch the highlights from that meeting back in August:

Ticket prices on a matchday at The Sands Venue Stadium are as follows:

Robins fans booked on the Travel Club coach heading to the game are advised that it leaves from the car park at the Jonny-Rocks Stadium at 10am.

Keep up to date with everything at the Sands Venue Stadium by following @CTFCofficial on Twitter. Score updates will also be available on the CTFC Facebook page.

Tune in to match commentary online on iFollow by purchasing an audio match pass.

After the match you can visit the club website to read a match report and hear from manager Michael Duff.

Match highlights will also be available on iFollow on the club website shortly after the match.

Below par Cheltenham Town slipped to a narrow defeat at Scunthorpe United with John McAtee grabbing the only goal of the contest during the first half.

It's the Robins' seventh reverse in succession at the Sands Venue Stadium, as it's now called, but the reality on this occasion is that they didn't do enough to convert their promising play into meaningful chances.

Michael Duff didn't hide his frustration after the match, bemoaning the performance of his side but they now have a chance to rectify things in four days time with another testing long trip north, this time to Carlisle United.

On the plus side they remain seventh this evening by virtue of the favourable results of their play-off rivals but they will need to quickly rediscover their swagger if they are to maintain their promotion aspirations.

Duff made one change here, restoring Ryan Broom to the starting line-up at the expense of Max Sheaf. Reuben Reid returned for the first time since the match against Cambridge United in mid-December and took his place on an attack minded bench, with Rohan Ince missing out.

The game was lively in the opening exchanges. Alfie May went close to hooking one within seconds of the start while Alex Gilliead almost caught out Owen Evans with a 20 yarder that cleared the bar.

Although the Robins enjoyed a lot of the early ball they found themselves with a lot of defending to do and Charlie Raglan was in the thick of it, making a string of vital interceptions to break down the attacking play.

But Scunthorpe found a way through in the 18th minute through McAtee, who had sprung the Robins' high defensive line to race on to a long diagonal ball and round Evans, finishing from a tight angle down the left.

Cheltenham produced a good move to get back in it with 28 minutes played. Greaves's enterprising touch found Chris Hussey in an advanced position down the left, and he pulled it back into the path of May but the livewire striker didn't get a decent enough connection to trouble Ian Lawlor in the Scunthorpe goal.

May went closer five minutes later after he was found by Luke Varney, but he put his effort into the side netting. At the other end Dutchman Kevin van Veen sent a 25-yard free-kick well over the target.

Tom Nichols and Reuben Reid were pressed into action after the break, replacing Conor Thomas and Varney as the Robins continued to enjoy the lion's share of possession without really converting it into meaningful chances. Abo Eisa – Mo's younger brother – blasted two high and wide in quick succession as the Iron continue to create openings of their own.

The substitutions began to make the difference and with 20 minites to go, May found Broom out wide who centred for Nichols but the new boy couldn't reach it to test the goalkeeper. A moment later May did force Lawlor into a stop, albeit a relatively comfortable one.

The goalscorer McAtee saw a well struck effort from 20 yards flew past the angle of Evans' goal in the closing stages.

And Evans made a fantastic stop, diving to his right to prevent skipper Andy Butler heading home a second to keep his side in the contest with ten minutes to play.

The game should have been out of sight, two minutes from time, when van Veen dragged a golden opportunity across the face of goal from 12 yards. And the Robins were thankful to Jacob Greaves for a perfect last-ditch intervention to deny the Dutchman a shooting chance on the stroke of time.

However there was enough time for two great chances in added on time to snatch a point. The first came about when Hussey whipped a free-kick to the far post, allowing Long to slide in with an effort that rolled agonisingly across the face of goal. Then seconds later, Reid chested one down for May to hammer a half-volley but Lawlor was equal to it.

The ticket office is selling tickets and away travel for Cheltenham Town's away match at Scunthorpe United on Saturday 8 February.

You can save money by purchasing in advance for the game at The Sands Venue Stadium.

Tickets are priced at:

The Travel Club coach for the trip to Lincolnshire will leave from the Jonny-Rocks Stadium at 10am.

The ticket office is open on Saturday ahead of kick-off against Morecambe, as well as shortly after the game.

It's also open on Tuesday, Thursday and Friday between 10am and 3pm.