After a run of three straight home matches Cheltenham Town are on the road on Saturday with a visit to the JobServe Community Stadium to take on Colchester United (kick-off: 3pm).

It'll be the club's first ever away fixture on 29 February and the squad will be looking to make it a good one as they enter into the clash on the back of four straight wins.

Tuesday's win over Northampton at the Jonny-Rocks Stadium was another positive step forward in what has been a good second month of 2020.

Colchester are right up there again at the top end of League Two and Michael Duff's troops will have to be at the top of their game if they are to make the long journey home to Gloucestershire with a share of the potential points on offer.

Michael Duff has a near enough fully fit squad to choose from for the trip. George Lloyd is unavailable because of a hamstring problem he is making progress with, while Scott Flinders is a long-term absentee with a leg injury.

Watch Duff's press conference looking ahead to the match:

Midfielder Ryan Broom also spoke to the press this week to look ahead to Saturday's match.

This is Colchester's fourth consecutive season in League Two and they are again pushing for a return to the third tier.

Heading into Saturday's contest once again they find themselves firmly in the promotion picture and occupy 6th spot.

After slipping to back-to-back losses against Grimsby Town and Port Vale they got back to winning ways last time out with an away victory over Salford City.

Boss John McGreal (pictured), a former teammate of Michael Duff's during their playing days at Burnley, has been in charge since April 2016 having previously served as a caretaker in a longer spell at the club which saw him take charge of a number of its junior sides.

His squad is bolstered by the experience of Dean Gerken who has been in good form in the current campaign. The goalkeeper is back with the U's having started his career there, with spells at Bristol City and Ipswich in between. 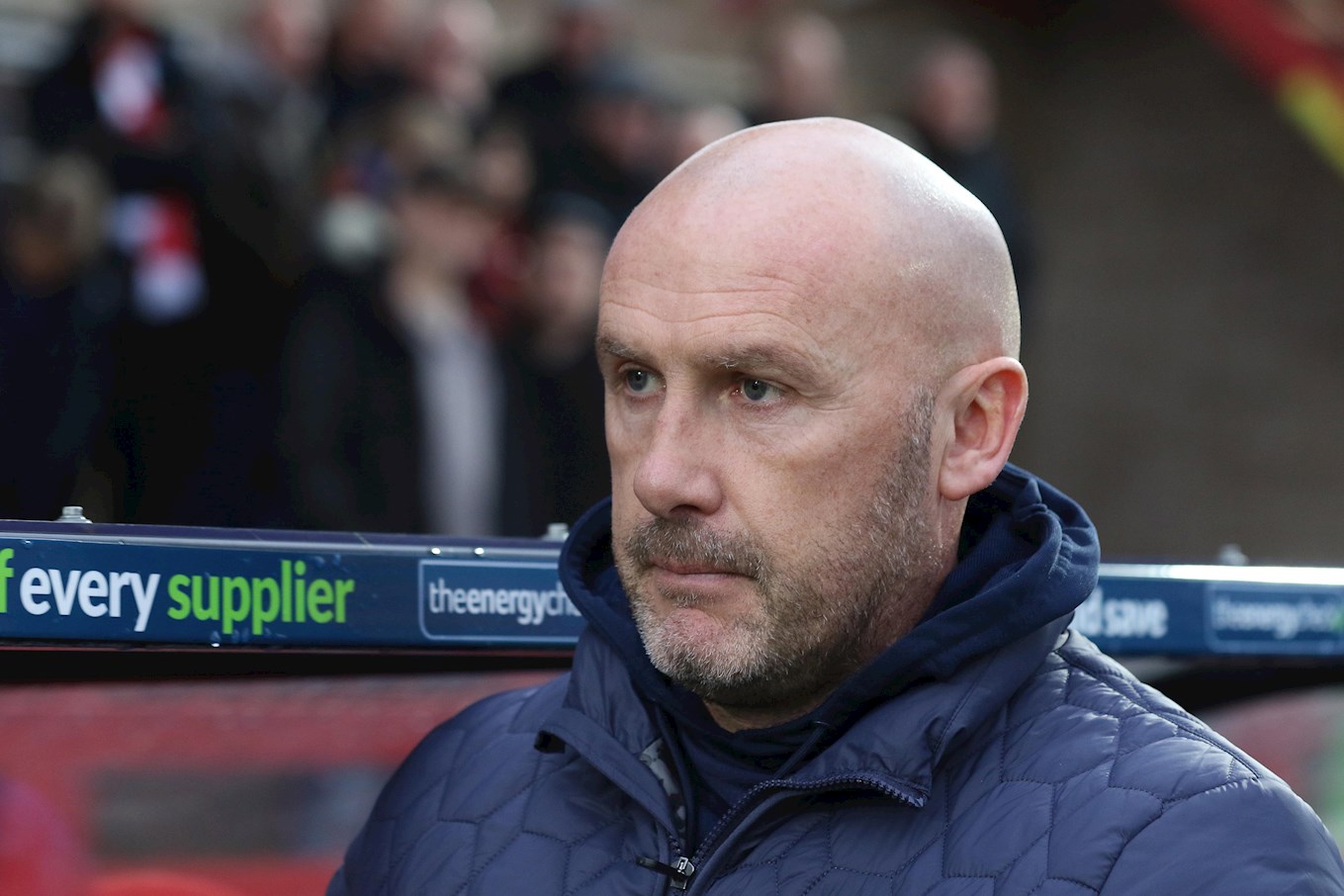 Their defensive set-up includes 31-year-old and captain Luke Prosser, ex-Arsenal under-23s full back Cohen Bramall and fellow full back Ryan Jackson who can count Newport County and Gillingham among his former sides. They've also recently recruited Miles Welch-Hayes after he terminated his contract at Macclesfield before the end of the January transfer window.

Robins fans will be very familiar with Harry Pell in their midfield department - he's now in his second campaign with Colchester after leaving the Robins for a move east.

At only 18 Kwame Poku is an exciting youngster who has featured regularly since transferring from non-league Worthing. Montserrat international Brandon Comley and ex-Wolves man Ben Stevenson add to their midfield options.

Up top they may look to Callum Harriott to provide them with an attacking threat. He's been at the club since the summer when he transferred from Championship side Reading.

Luke Norris is another with Football League quality in their front line ranks, Frank Nouble provides an imposing forward thinking threat, while ex-Luton man Luke Gambin likes to get forward from a wide position.

Conor Thomas hit the back of the net with a second half penalty when Colchester visited the Jonny-Rocks Stadium earlier in the season.

A late November meeting saw the Essex team take the lead in the first half when Luke Norris struck shortly before the half hour mark. 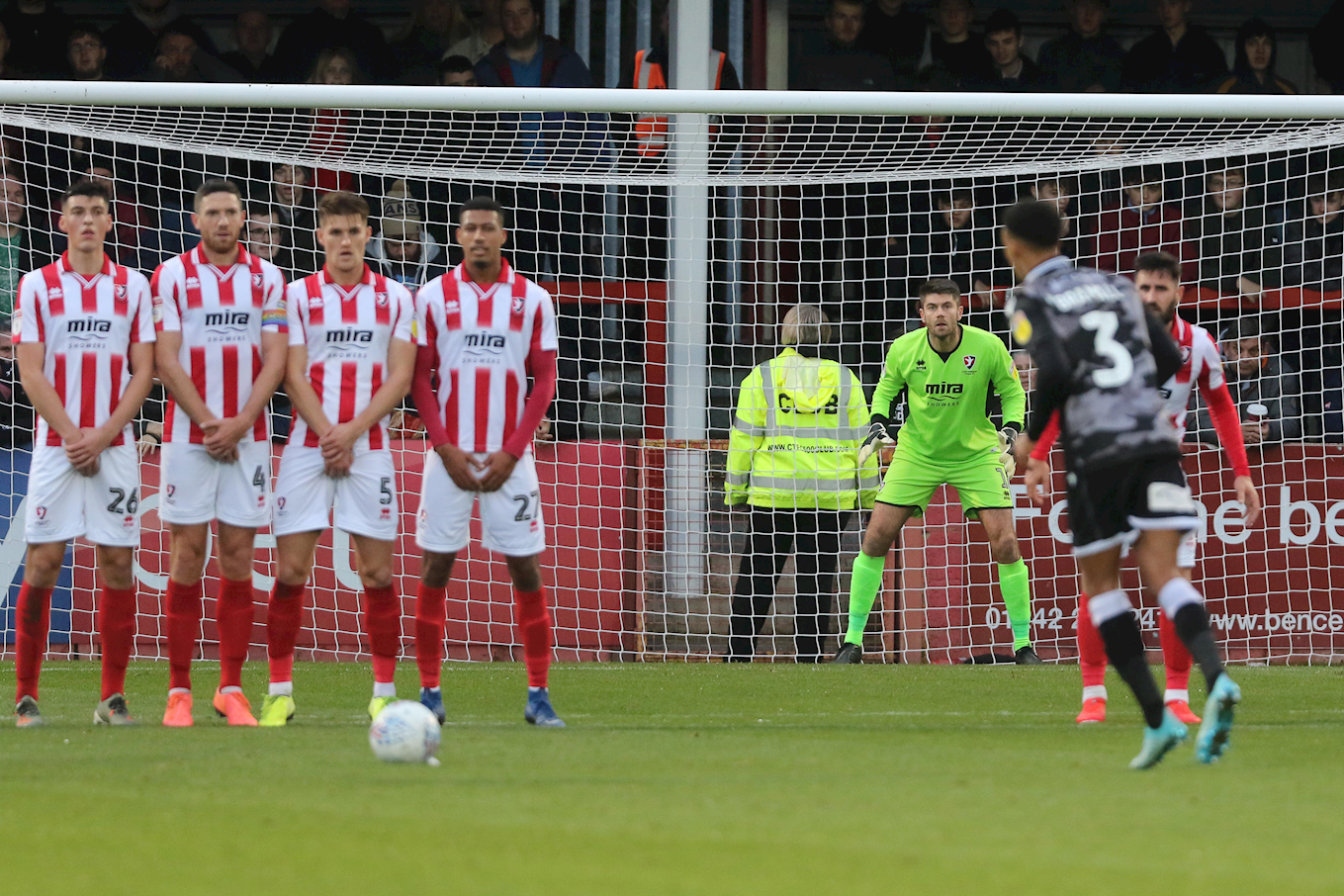 However the Robins would pick something up from the game when Reuben Reid went down in the box.

Thomas claimed the ball and hammered in from 12-yards to ensure the spoils were shared in a result that moved Cheltenham onto 30 points and sixth position in the League Two table.

Watch the highlights back from that first encounter:

Tune in to hear full match coverage online with iFollow. Purchase a match pass to listen.

After the game visit the club website to read a match report and to read and watch reaction to the result from inside the camp.

Highlights will be available to watch online via iFollow a few hours after the match.

Cheltenham Town produced a performance full of grit and determination to run out winners at fellow promotion hopefuls Colchester United.

A goal either side of the interval handed Michael Duff's side a fifth straight win, a result that took them up a place into fourth spot tonight.

It wasn't a game for the purists but once again the Robins showed all the qualities they'll need to mount a promotion push in the coming months.

If Alfie May's goal before the break was against the run of play then Chris Hussey's free-kick was more than merited for an outstanding second half showing that restricted Colchester to one wayward effort.

So are you daring to dream?

Duff made three changes to his side, two of which were forced by injury. Conor Thomas and Jake Doyle-Hayes missed out with knocks and were replaced in midfield by Chris Clements and Max Sheaf while Luke Varney came in for Reuben Reid in attack.

Alex Addai travelled with the squad to Essex but suffered a knee problem ahead of the match and was replaced on the bench by Jonte Smith.

Colchester were in the ascendancy in the first half, adapting much better to a pitch – which was boggy in places – but it was the Robins that held the initiative at the interval because of May's goal.

Owen Evans made a smart early stop to prevent Ben Stevenson grabbing the opening goal with 13 minutes played after the Colchester midfielder had forced his way into a good position in the box.

Theo Robinson fashioned a shooting chance a few moments later but he pushed his effort needed more curl to test the Cheltenham number one.

It was keenly contested and perhaps it was no surprise to see Harry Pell flashed the first yellow card on 19 minutes for a typically robust challenge on Luke Varney. It was one of a string of niggly clashes which also saw May cautioned before the break.

But it was his first-half goal that everyone was talking about at the half-way point and it came against the run of play in the 39th minute.

The diminutive striker sprung the offside trap to race onto Clements' searching ball before beating Dean Gerken with a low effort that squirted under the Colchester goalkeeper.

Where Colchester edged the first period, the second belonged to Cheltenham.

Robinson did have another chance 10 minutes after the break, meeting Ryan Jackson's cross with a firm volley but it flew over the bar, but the Robins dug in and fought to restrict their hosts.

Duff made a couple of changes in the opening exchanges of the second period. Rohan Ince was pressed into action in midfield at the expense of Clements while Varney was withdrawn with what looked like a leg strain, with Smith going on in his place.

Gerken made his first real save of note 23 minutes from time to deny Sheaf, curling one from the edge of the box after a nice move down the left as Duff's side enjoyed their best spell of the game to frustrate the hosts.

And the pressure culminated with the second goal 11 minutes from time, Hussey finding the top corner with an inswinging free-kick from a tight angle down the right to send the 196 travelling fans into jubilation. They're starting to sense something special.

Tickets and away travel for the match at Colchester United's JobServe Community Stadium on Saturday 29 February are on sale at the ticket office.

The Robins head to Essex at the end of the month for another important clash in the final third of the season against a team who are once again right up there challenging at the top of the division.

Tickets are available to buy in advance from the ticket office. Fans can save money by buying before the matchday with different deadlines for cheaper ticket purchases.

Prices for the game are:

Away travel on the Travel Club coach is also available to book from the ticket office.