The second of three home matches in the space of ten days at the Jonny-Rocks Stadium sees Mansfield Town visit on Saturday (kick-off: 3pm).

Michael Duff's men are looking to follow up their fantastic last gasp win over Leyton Orient last time out with another good result against the Stags.

This weekend's encounter is also another good chance to make it five straight home wins.

Mansfield will be a tough opponent though with a number of talented individuals who helped them all the way to the League Two play-offs last season. It's another big test for the Robins as they look to keep up the pace in the play-off spots.

Tickets are available to buy online and on the day on Saturday as we go in search of another positive performance.

Conor Thomas could be considered to return to the side after a recent recurrence of his rib injury.

Scott Flinders and George Lloyd remain out of contention though.

Midfielder Chris Clements has also been preparing for Saturday's game against his former club and has been speaking to the media this week.

It's two-and-a-half months since Cheltenham picked up three points and a clean sheet at Mansfield's One Call Stadium at the beginning of December.

Since then Saturday's visitors have made a big chance in an attempt to improve their circumstances in League Two this season. Then manager John Dempster was relieved of his duties and Graham Coughlan is now in charge of the Stags having left his position at League One Bristol Rovers.

It's been far from the season many would have expected for Mansfield. They narrowly missed out on automatic promotion last season and were then denied a place at Wembley in the play-offs when they lost to Newport County AFC.

They are currently 20th in League Two having picked up 35 points from 34 games. The remainder of the season will be very much a building process for Coughlan as they look to mount a promotion charge in the 2020/21 campaign.

Their visit to Gloucestershire weekend sees them head into the game having lost only one of their last four games however and they have been better away from home this season. 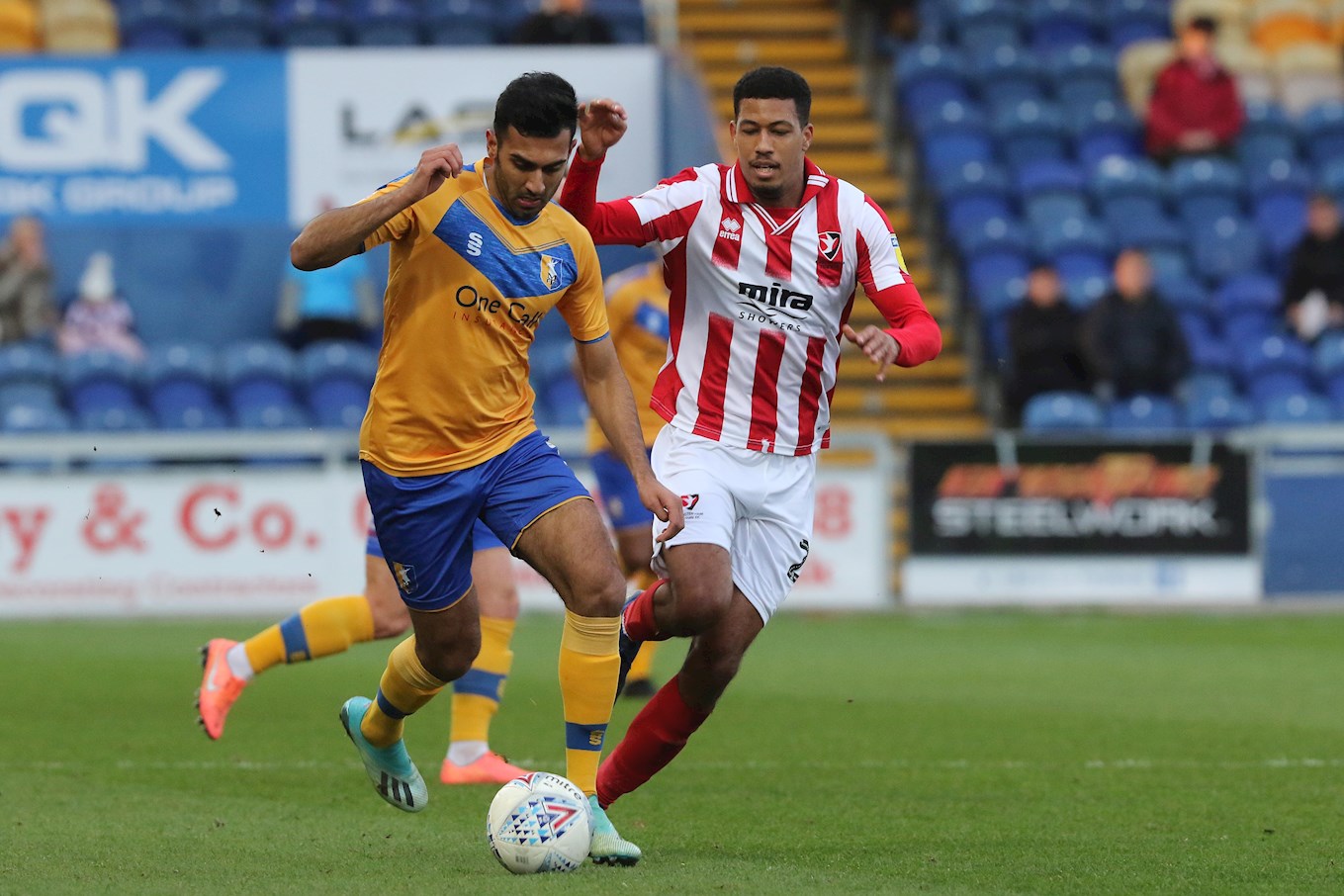 They handed a first Football League appearance to goalkeeper Aidan Stone in their victory against Newport last Saturday. The experienced Bobby Olejnik could return to the team if Stone doesn't continue.

Defensively the powerful Krystian Pearce is very much a leader in their back line. Kelland Watts, who is on loan from Newcastle United, and Irishman Ryan Sweeney are other likely defenders to be involved.

Neal Bishop offers vast Football League experience in midfield while former Everton youngster Harry Charsley may be offered the chance to impress. Willem Tomlinson is another in that area of the pitch with plenty of running in him, while the Stags are yet to use Jack Evans since he joined on loan from Swansea City in January.

Their attacking set-up boasts the goal scoring attributes offered by Nicky Maynard. Equally Danny Rose has a good goal scoring record for them when he's been involved this season, while in a wide area CJ Hamilton's directness can offer a big threat. The much travelled Wales international Craig Davies could be a route for them to go down at the head of their attack too.

The Robins bagged three goals without reply at Mansfield's One Call Stadium back in the first part of December.

Jonte Smith opened the scoring just past the half hour mark with a well-taken header from Jake Doyle-Hayes' right-footed delivery into the box. 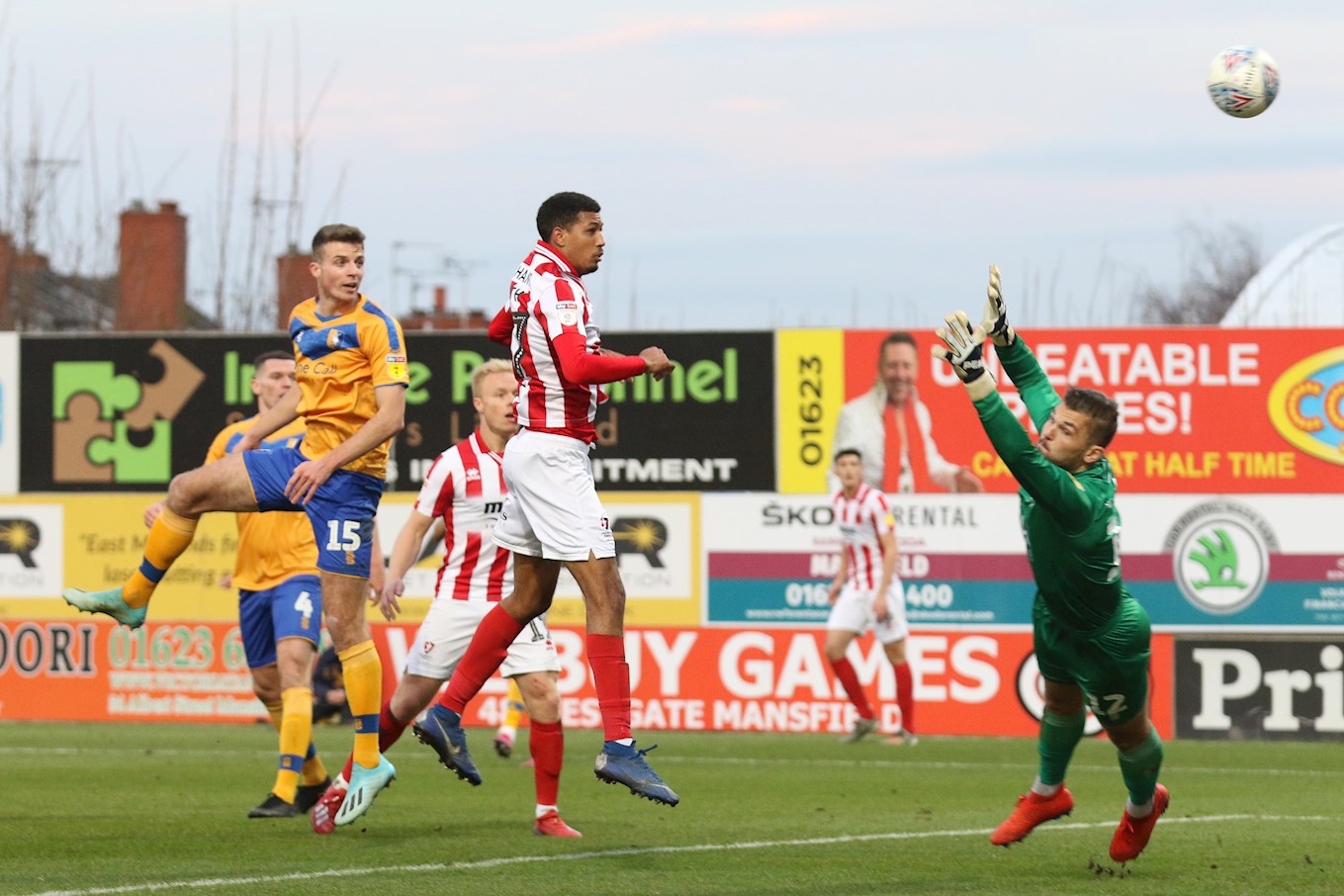 Another delivery from a wide area, this time by Chris Hussey, led to the second goal as Will Boyle stooped low to head in.

It was 3-0 in the final five minutes when Alex Addai slid home a third on a successful afternoon in Nottinghamshire.

Watch the highlights back from that game:

Supporters can buy online in advance of Saturday's game. Tickets can also be purchased from the ticket office at midday, while they are also available to buy from the turnstiles.

The ticket office will also be selling tickets for upcomig away matches, including the game at Colchester United on Saturday 29 February.

You can also visit the club shop to buy merchandise before the game. This includes the remaining available special edition Hollie Gazzard Trust shirts and matchday programme.

Saturday's game will see a former manager and former coach for the Robins return as special guests.

Chris Robinson and Bob Bloomer are Saturday's guests of the club and fans will be able to meet with the pair as well as hear from them at half time when they are interviewed by Jim Haggin.

Robinson was the manager who gave current boss Michael Duff his Cheltenham debut as a youngster. He now works for Chelsea as Head of Integration Recruitment.

Bloomer spent nine years as a player at Cheltenham, making 264 appearances. He won promotions in his time at the club and also won the FA Trophy at Wembley in 1998. After finishing playing he went onto work as a coach. 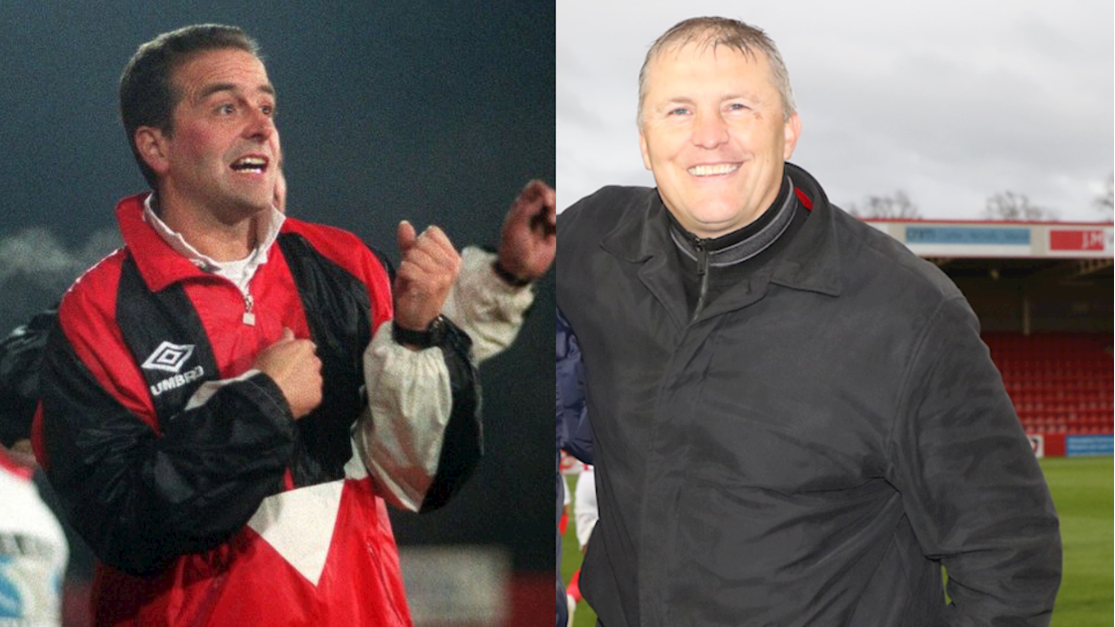 Pick up a copy of Saturday's match programme from a number of outlets around the stadium and the club shop. It's priced at £3.

The big interview is with January signing Tom Nichols as he highlights what he's looking to achieve in his time at Cheltenham, looks back on a career that's taken him from Exeter City to Peterborough United to Bristol Rovers, and the influence certain managers such as Mansfield's Graham Coughlan have had when working under them.

Also in Saturday's programme there are interviews with Jake Doyle-Hayes and Chris Clements. Under-18s defender Toby Lawrence features while there's also more with Michael Duff, Dan Bowry, Ben Tozer and all the usual bits and pieces to enjoy. 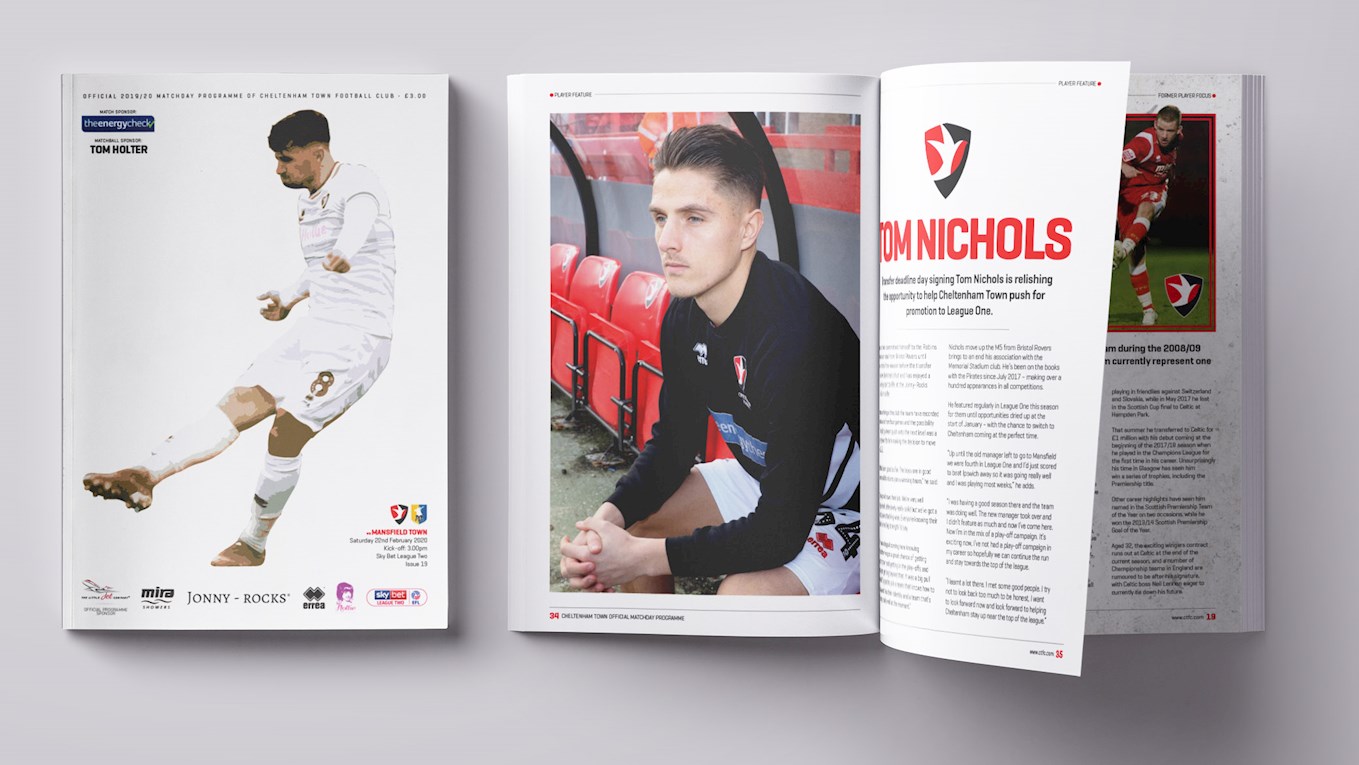 Keep up to date with everything on matchday by following @CTFCofficial on Twitter. Facebook users can also visit the club's official page to see goal updates.

Listen in to full match commentary by purchasing an audio match pass and listen in on iFollow.

Post-match visit the club website to read a match report and to hear from Michael Duff's press conference.

Match highlights will be available to view on the club website and iFollow a few hours after the game.

Cheltenham secured yet another home victory after a narrow 1-0 triumph over Mansfield Town in League Two.

The hosts secured a first league double over their opponents for the first time since 2004/05 and had Reuben Reid to thank once again, after he came off the bench to score a third goal in his last three games.

The visitors almost made the best possible start when within a minute of kick off, Harry Charsley volleyed powerfully from the edge of the box only to be thwarted by a Ben Tozer block.

But the Robins sprung into life moments later when Nichols thread a nice through ball to Alfie May, before the front man spread it out to Broom whose cross almost met the toe of Luke Varney.

May has had a great start to life at the Jonny-Rocks - netting four in his first four home games - and volleyed wide inside the area on four minutes. 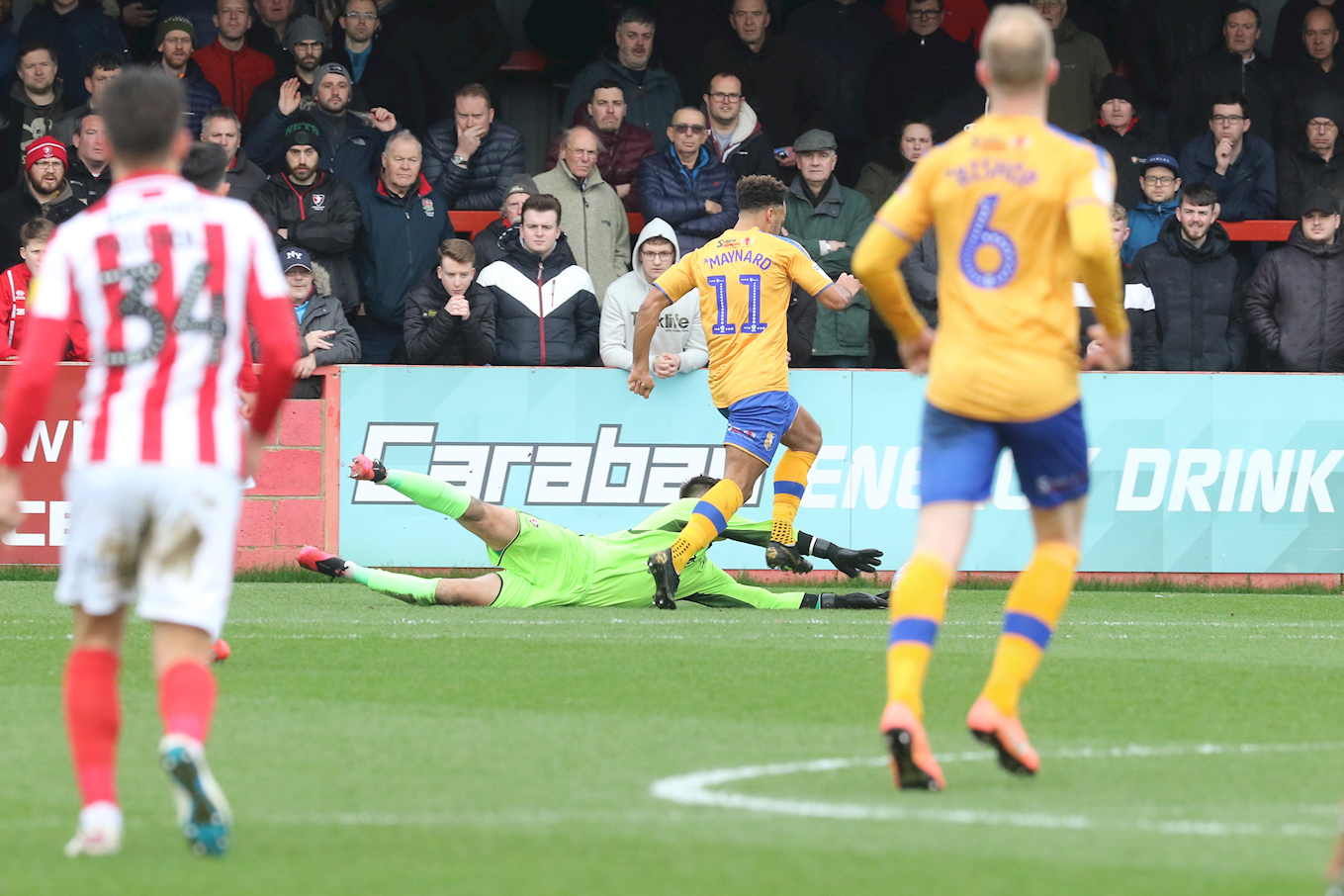 He went close again inside the first ten minutes after receiving a short pass from Jake Doyle-Hayes, he cut inside on his left and hit a powerful shot just over the bar.

Nicky Maynard had the best chance of the game in the 14th minute, one-on-one with goalkeeper Owen Evans, he tried to round the Wigan loanee but was denied on the stretch as he clawed it away from the striker’s feet.

Varney was next to go close, after receiving a headed pass from Chris Clements outside the area, he struck it well on the volley only to see it drop onto the roof of the net.

Maynard thought he had broken the deadlock just past the half-hour mark, with the ball landing at his feet deep inside the area, but his left footed shot hit the side netting as the home fans held their breath.

The home side should have taken the lead just before the interval, Doyle-Hayes put in a delicious cross but May failed to connect with the goal gaping. 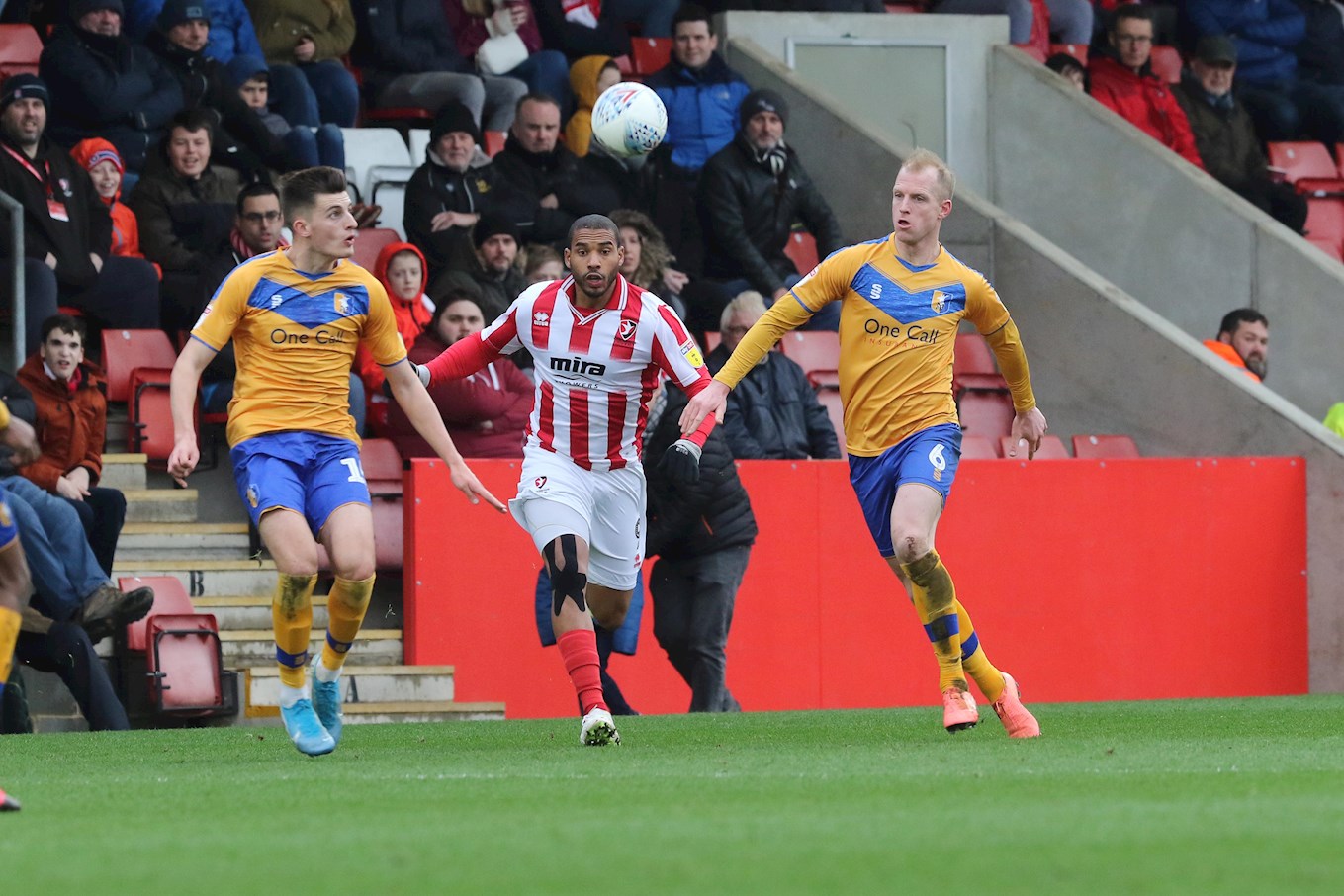 Mansfield had another guilt-edged chance to take the lead early in the second half, Chris Clements lost it in a dangerous area but luckily for the Robins, Evans stood tall and denied Will Tomlinson.

Cheltenham responded when Will Boyle’s cross found May at the far post but unmarked he could only direct it high and wide.

Finally, the deadlock was broken on the hour mark, with substitute Reid powering home a header from a delightful Ryan Broom cross.

May thought he had got his goal not long after, smashing home Boyle’s cross only to be denied by the linesman’s flag.

It would not matter though as the Robins held on for a vital victory.

Mansfield Town are the visitors to the Jonny-Rocks Stadium on Saturday as the push to maintain the team's position in League Two's top seven continues.

Last Saturday's 2-1 victory over Leyton Orient has seen the Robins move up to fifth in the division and this weekend a side that reached last season's play-off semi-finals come to town.

Kick-off is 3pm against a Stags outfit who were last opponents back in December when an excellent away performance brought with it a 3-0 win.

With only eight home fixtures remaining this season it's hoped the Robins fans will continue to help push the team on by boosting the attendance at the Jonny-Rocks Stadium.

You can buy tickets in advance of Saturday's fixture from the ticket office this week on Tuesday, Thursday and Friday between 10am and 3pm by buying in person or on the phone by ringing 01242 573558 (option 1).

Tickets are also available to purchase online at any time.

Keep an eye on the club website throughout the week for build up to Saturday's game.

The ticket office is also selling tickets for other upcoming home fixtures against Northampton Town (Tuesday 25 February) and Port Vale (Saturday 7 March), while tickets for the away fixture at Colchester United on Saturday 29 February are also available.