Cheltenham Town go in search of a first away win of the season on Saturday with a trip to the Globe Arena to take on Morecambe (kick-off: 3pm).

A first League Two victory of the season over Scunthorpe United brought with it an emphatic 4-1 win last weekend to ensure the Robins travel north to Lancashire with points already on the board.

The midweek loss to League One Bristol Rovers in the Carabao Cup is now behind Michael Duff's side as they look to make good early season progress in the League.

Morecambe themselves secured safe passage through in the Carabao Cup in midweek in an all League Two tie and will provide stern opponents on home soil this weekend.

Injury will rule out Will Boyle and Reuben Reid, however Ryan Broom and Max Sheaf are both expected to return after missing Tuesday's Carabao Cup defeat.

Striker Gavin Reilly is also available for selection after he was unavailable in midweek.

Rohan Ince's suspension means he misses out for a third game in a row.

Morecambe have started the season with a loss on the opening day to Grimsby, an away draw at Mansfield, plus a Carabao Cup win once again over Mansfield on penalty kicks.

Jim Bentley's side are entering into their 13th season at this level following their promotion from the old Conference National in 2007.

Their squad features a number of long-term servants such as goalkeeper Barry Roche and the entertaining 40-year-old Kevin Ellison. 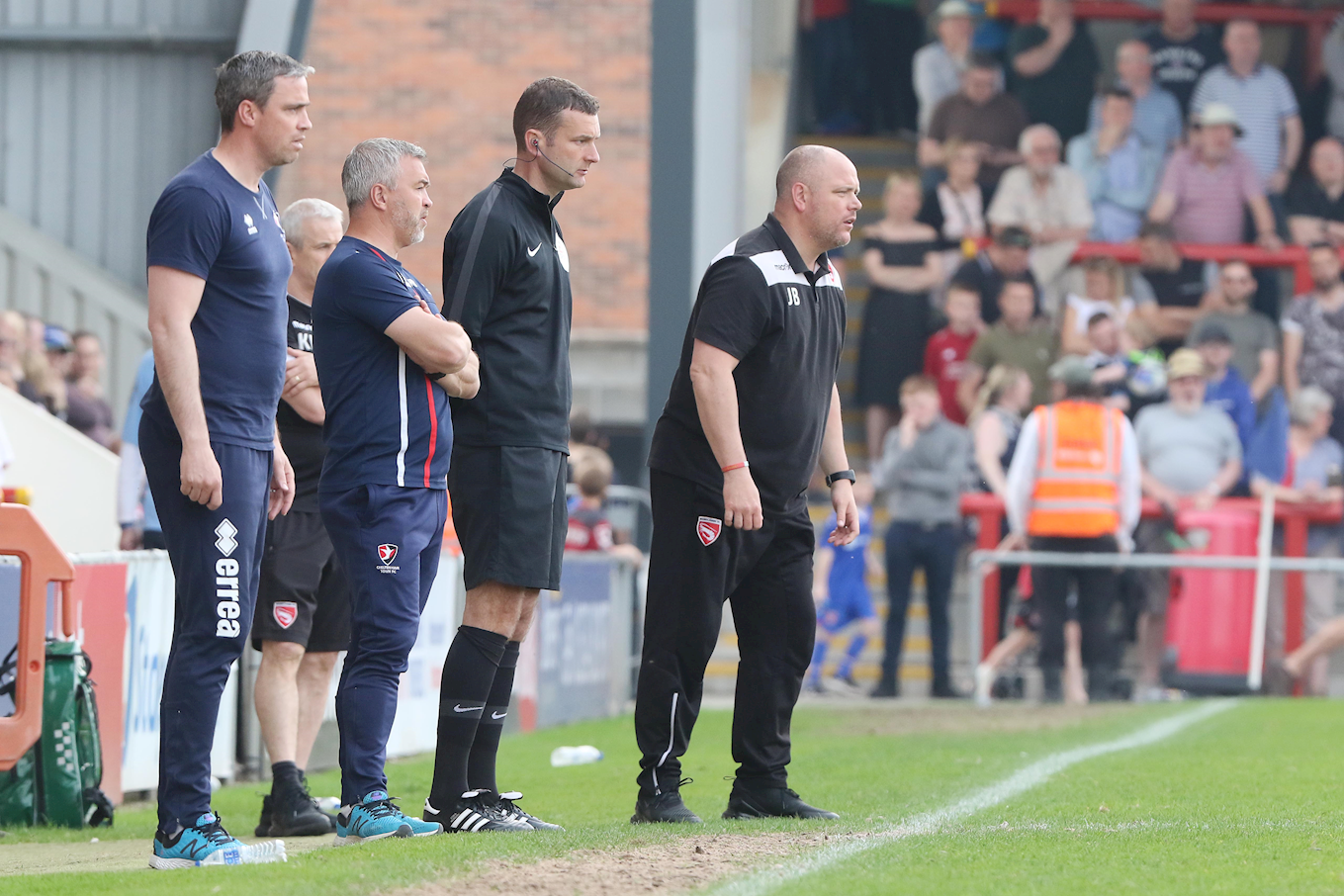 The spine of their team is built on the likes of former Cardiff City man Aaron Wildig in midfield, while at the back Steven Old, former Burnley man Luke Conlan and Scotland youth international Sam Lavelle provide the solid platform that has seen them become an effective side at this level for many seasons.

In attack the Robins back line will have to keep a watchful eye over the likes of summer arrival Lewis Alessandra, ex-Tranmere Rovers target man Cole Stockton and AJ Leitch-Smith - a former teammate of Chris Clements at Crewe Alexandra.

They include one former Cheltenham man in the shape of Jordan Cranston in their ranks. He signed a new two-year deal to stay with the Lancashire side in June, while this week they've brought in Manchester United youngster George Tanner on loan. The 19-year-old left back has agreed a season-long move.

In the Football League the two clubs have been familiar opponents in League Two. Since 2008, except for two FA Cup meetings, all of the teams clashes have been in the fourth tier.

Cheltenham boast the better record having won on nine occasions, while Morecambe have come out on top five times. There have also been six draws between the two.

The club's last two visits to the Shrimps have ended in defeats. Last season it was a disappointing 4-0 loss. The last Cheltenham victory there was in December 2016 when goals from Billy Waters and Harry Pell sealed a 2-1 win - watch the highlights from that game below.

The Robins biggest win over Saturday's opponents in the Football League is a 3-0 score-line, achieved twice, in October 2013 and April 2018.

Tickets are available to buy on the day. They must be bought from Morecambe's ticket office and can no longer be purchased on the turnstiles. They can also be bought in advance online here up to 2.30pm on matchday.

Fans who have booked on the Travel Club coach travelling to the fixture are advised that it leaves from the Jonny-Rocks Stadium at 9am.

Stay up to date with all that goes on by following @CTFCofficial on Twitter. Updates will also be available to keep an eye on via the club's Facebook page.

Post-match you'll be able to visit the club website to read a match report and hear from manager Michael Duff give his views on the performance.

Cheltenham Town produced a much improved performance on their travels to pick up a share of the spoils in Morecambe this afternoon.

They more than matched their opponents at the Globe Arena but despite their promising play throughout, they couldn't force veteran goalkeeper Barry Roche into a meaningful save in a game of few chances.

Morecambe hit the woodwork before the break while the Robins had half a claim for a penalty in the second half but that was about it on a windy afternoon on the Lancashire coast.

This was an infinitely better performance than the one we saw here at Easter, by a relatively young Robins side against a typically well chiselled outfit under Jim Bentley.

It leaves the Robins with a full gamut of results after three League Two games with Carlisle United in town on Tuesday night.

Duff made three changes to the side that were well beaten by Bristol Rovers on Tuesday. Ryan Broom (for Conor Thomas), Max Sheaf (Chris Clements) and Gavin Reilly (Alex Addai) came into the starting line-up with Tahvon Campbell dropping to the bench while young players Tom Chamberlain and Archie Brennan retained their places amongst the substitutes.

There was a sight of goal for seasoned campaigner Kevin Ellison around the 20-minute mark, seizing on some hesitation between Charlie Raglan and Ben Tozer but Scott Flinders did enough to see off the danger and by the half-hour mark, very little had had transpired in terms of goalmouth action.

But each side had a fantastic chance to break the deadlock as the opening 45 minutes drew to a close. First Gavin Reilly wasted a great chance to open his account for the Robins, spurning a chance at the far post before Lewis Alessandra, at the end, watched an angled drive come back off the angle of the goal.

Reilly almost caught Roche off guard with a looping cross in the opening moments of the second period. The hosts had changed formation to match Duff's men which was testament to his young side's effort before the break.

Duff made a couple of changes, replacing Sheaf (with Conor Thomas) and Reilly (George Lloyd) after the hour but the next chance fell to Stockton, who wrapped his foot around an Adam Buxton cross from the right but it flew a foot over.

Broom tried his luck from distance but it travelled well wide of the target during a spell of promising possession in the final quarter of the match which culminated in the midfielder being hauled down just outside the box by Roche, racing from his line.

The Morecambe number one was carded for the indiscretion but Doyle-Hayes' subsequent free-kick was cleared. Five minutes from time Sean Long lifted a clever effort onto the roof of the net after Lloyd had won a throw in out of nothing on the far side.

The young striker really put himself about during his cameo and won a corner as the game drew to a close, leading to two more but his side couldn't force a clear chance. Morecambe threatened in injury time but Flinders wasn't tested and the spoils were shared.

Tickets and away travel for Cheltenham Town's next League Two away trip are on sale at the ticket office at the Jonny-Rocks Stadium.

Michael Duff's side head to Morecambe's Globe Arena on Saturday 17 August in the search for points on the road.

Ticket prices for the game have been confirmed:

Prices increase by £2 on a matchday and visitng supporters can no longer pay cash on the gate.

As well as buying from the ticket office you can also purchase online here.

The Travel Club coach heading to Lancashire departs the Jonny-Rocks Stadium at 9am.

The ticket office is open on a Tuesday, Thursday and Friday between 10am and 3pm, as well as before kick-off on Saturday against Scunthorpe United.