After back-to-back home matches it's back on the road for Cheltenham Town on Saturday with a trip to west Sussex to take on Crawley Town (kick-off: 3pm).

A win and a draw in consecutive home fixtures against Carlisle United and Swindon Town have set Michael Duff's side up nicely for this weekend's clash at the People's Pension Stadium against a team flying high after their Premier League giant-killing of Norwich City in the Carabao Cup on Tuesday night.

Crawley made it into the third round of this year's Carabao Cup competition with a single first half goal victory over the Canaries in midweek and will take on Stoke City at the next stage.

The Robins will make the trip looking to build on the recent goalless away draw at Morecambe, with Duff's side no doubt eager to end the opening month of the season on a high.

Injury rules Luke Varney, Reuben Reid, Will Boyle and Max Sheaf out of the game, however Rohan Ince's return after a five match ban is a welcome sight for Robins fans.

Alex Addai has been training ahead of a potential return to the team too.

Twelfth after their opening five League Two fixtures and coming into Saturday's game on the back of a Carabao Cup giant-killing of Premier League Norwich City, Crawley have enjoyed an ideal start to the new campaign.

Netting 14 goals in the process, they've found the back of the net in all seven games they've faced this season, and in Bez Lubala also possess one of the highest early goal scorers in the division so far this season.

Italian Gabriele Cioffi (pictured below) is now in place for his first full season in charge of the Red Devils in what is only his second managerial job and his first in England having only previously managed U.S. Gavorrano previously. He has however worked on the coaching staff at Birmingham City too, as well as spending time coaching in Australia.

Birmingham links are present in his side with goal scorer Lubala not just a former Blues product, but goalkeeper Michael Luyambula on loan from the St Andrews outfit too, though Glenn Morris is the usual man to don the gloves in league games. 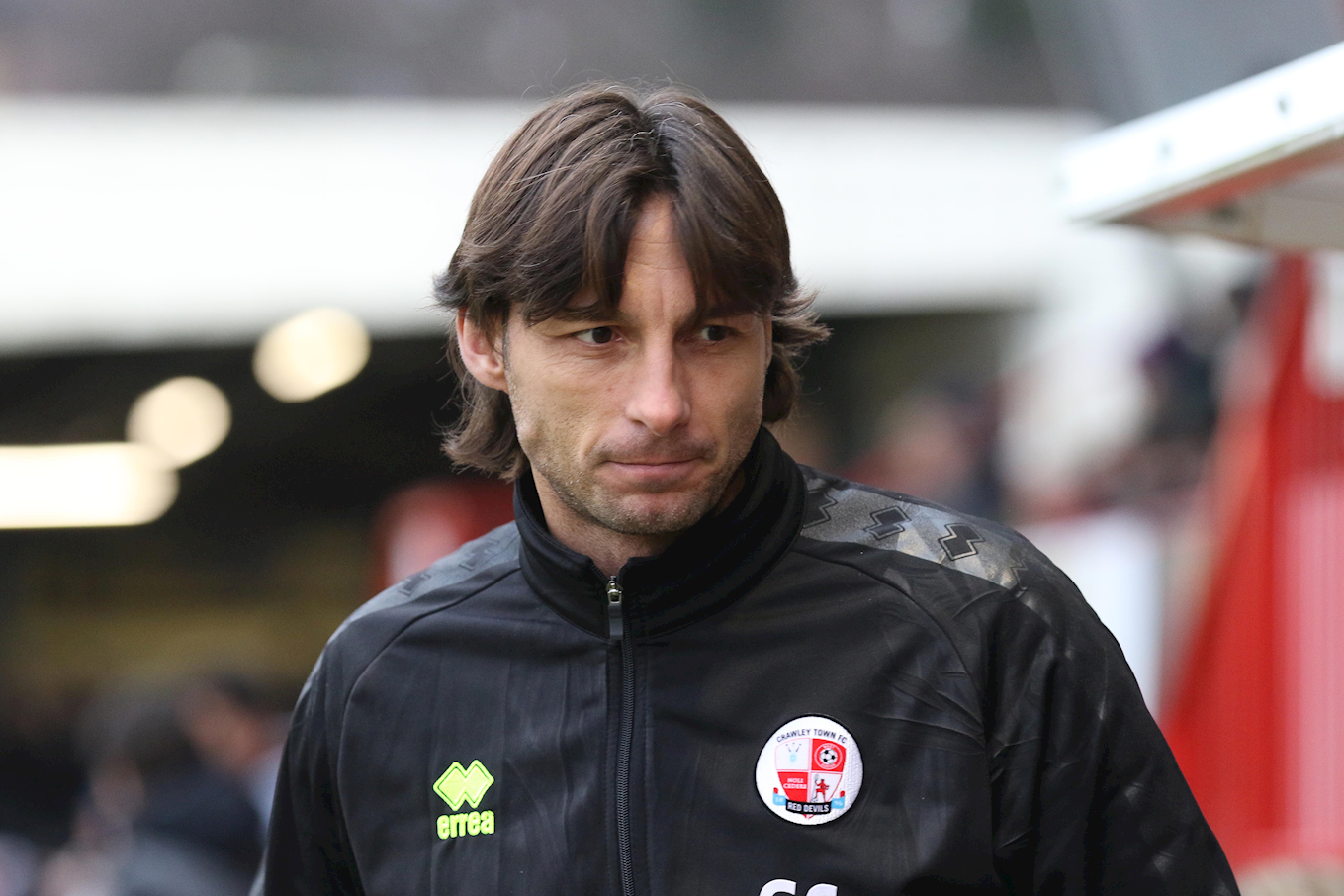 Their squad also includes options such as Ollie Palmer and Ashley Nadesan in their attacking department, while in midfield the ever present Dannie Bulman can still be relied upon at the age of 40. Filipe Morais, previously of Hibernian, is another midfield body many will be familiar with.

Defensively they brought in Jordan Tunnicliffe from AFC Fylde in the summer, while Tom Dallison and Lewis Young, younger brother of Manchester United's Ashley, are options along their back line too.

From their two home league matches so far they have beaten new boys Salford City 2-0 and also lost 2-1 to Crewe.

Saturday's game will be the ninth League Two game between the two clubs and the tenth in all competitions, with Cheltenham having won a League Cup contest in an August 2013 meeting.

Crawley did the double over the Robins for the first time last season. The only other defeat against the west Sussex outfit came in February 2012.

The Robins boast the better record between the two having won five, drawn one, and lost three times.

Tickets are available on the day at the game for fans who haven't bought in advance.

The Travel Club coach for fans who have booked on-board leaves the Jonny-Rocks Stadium at 10.15am.

Stay up to date with events at the People's Pension Stadium by following @CTFCofficial on Twitter. You can also check out team news and goal updates on the CTFC Facebook page too.

Post-match visit the club website for full reaction from the management and players, and to read the match report.

You can listen to commentary on iFollow online.

For the second season in succession, a solitary goal by Ollie Palmer handed Crawley Town all the points at the People's Pension Stadium.

The Robins were far from their best but for 90 minutes it looked as if they had done just enough to return home with a point before the big striker had his say, leaving the travelling contingent left to once again rue their side's travel sickness.

In fairness Michael Duff's side didn't create much but they had their chances, the best falling to George Lloyd who was inches from pinching a goal shortly after the break.

But on the stroke of time Palmer, his side's outstanding performer, took full advantage of some sloppy defending after a hopeful diagonal ball into the box to skip around Charlie Raglan and smash home the winner from 12 yards.

Up to that point the Robins had defended well enough and had they held out, another point away from home would have been another step in the right direction but it's all about the fine margins and the Robins were made to pay for their late lapse in concentration.

Rohan Ince was due to make a welcome return following his five-match suspension, replacing Chris Clements but the midfielder was injured during the warm-up and withdrew minutes before kick-off.

That meant Clements joined Jake Doyle-Hayes in midfield behind Ryan Broom while in attack, Lloyd was handed his first start of the campaign in place of Luke Varney. The evergreen striker picked up a hamstring injury in the first half of the match against Swindon Town last weekend and will be absent for a fortnight.

Alex Addai took his place on the bench fter recovering from a groin injury to take his place among the substitutes. Josh Debayo missed out through injury.

The home side made all the early running and forced the Robins into plenty of defending during the first half although Scott Flinders was untested.

There were a handful of chances, albeit for Crawley. Bez Lubala had cut inside and tried one from the edge of the box but watched his deflected shot fizz wide of the right post. Tom Dallison headed over from the subsequent corner and Ferguson missed the target with a low free-kick from 20 yards.

Cheltenham defended resolutely and Charlie Raglan found himself in the wars, receiving treatment for a couple of heavy knocks before the break after tangling with Reece Grego-Cox and then Filipe Morais. However they struggled to create any meaningful forward play.

Duff's side were much brighter after the interval and fashioned a great opening eight minutes after the restart, Doyle-Hayes playing in Sean Long down the right who cut one back across the goal into the path of Lloyd. Unfortunately from a Cheltenham perspective, the young striker was a matter of inches from connecting for a certain goal.

At the other end, Palmer called Finders into a low stop with an angled drive.

Broom went close after he had capitalised on some hesitant defending to lift one under the crossbar, but Tom Dallison was calm and cleared the danger with Lloyd lurking. Fourteen minutes from time the midfielder blasted one well over from distance after some promising play down the middle.

There was an audacious late effort by Lubala from inside his own half after Flinders had made a poor clearance four minutes from time, but in the end it drifted well wide. The Robins number one made amends with a smart double save moments later to keep his side in it before the late drama.

Tickets and away travel for the final match of August at Crawley Town's The People's Pension Stadium are on sale from the ticket office.

The Robins head to west Sussex to take on the Red Devils on Saturday 31 August. Kick-off is at 3pm.

The Travel Club coach heading to the game will leave the Jonny-Rocks Stadium at 10.15am.

The ticket office at Cheltenham is open on Tuesday and Thursday between 10am and 3pm and up to 2.15pm on Friday.