It's a huge West Country encounter between Cheltenham Town and Swindon Town at the Jonny-Rocks Stadium on Saturday (kick-off: 3pm).

The season may still be only a few weeks old but it is a 5th and against 7th meeting for two clubs only 32 miles apart in League Two.

Both teams are locked on seven points from the opening four games of the season, and Swindon will travel in good voice looking to make an impact on a fantastic home record Michael Duff's men have continued to build following Tuesday's strong home win against Carlisle United.

Tickets are available to buy for Saturday's game at the turnstiles. You can also purchase online here.

Midfielder Rohan Ince misses out against his former club as he sits out the last game of his suspension.

Reuben Reid and Max Sheaf have injuries that rule them out. Alex Addai and Chris Hussey are in contention after recent fitness concerns.

Conor Thomas is another who could line up against his old side, as well as Ben Tozer who started his senior career at the County Ground.

Watch Michael Duff's press conference this week looking ahead to the game:

With Richie Wellens now set for his first full season in charge at the County Ground the former Doncaster Rovers midfielder will be hoping to be the man responsible for guiding Swindon back to the third tier.

He will not be in the dugout for Saturday's clash though. He is serving a two game ban after being served an improper conduct charge by the Football Association.

His team have though made a decent start to the new campaign. They've got seven points on the board so far from their first four outings, losing for the first time on Tuesday night in controversial circumstances in a tight home game with Northampton.

The Robins back line will be well aware of the threat the Wiltshire side have on the attack. Michael Duff has already highlighted Swindon's counter-attacking qualities, and with the likes of Kaiyne Woolery and his pace, and recent signing Eoin Doyle they will be a dangerous team up top.

They may be missing Wales international Lloyd Isgrove through injury, while former Manchester United full back Zeki Fryer is definitely out.

Nevertheless they've built a quality squad that has strength in all areas, from the experience of shot-stopper Luke McCormick, to the style of central midfield man Michael Doughty - it will certainly be the team's toughest test so far this season.

It was the final home outing at the Jonny-Rocks Stadium last season when both teams previously met.

That day Cheltenham boasted a 3-0 lead for much of the game, but had a late scare when Swindon bagged two late goals.

Luke Woolfenden's own goal put the Robins in front and it was 2-0 four minutes later when Billy Waters struck. 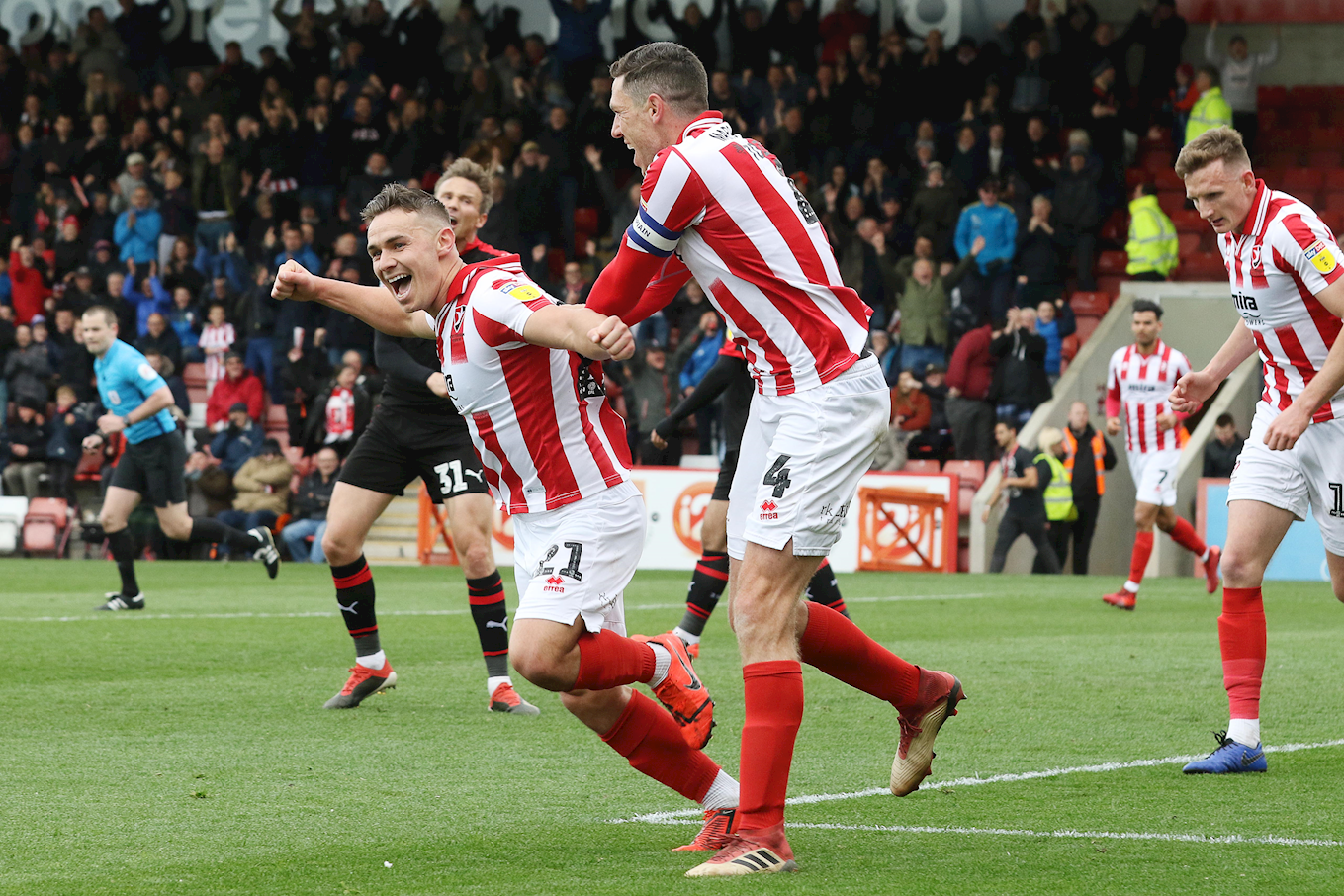 Kevin Dawson then found the net for the last time in a Cheltenham shirt to complete a first half rout.

The visitors almost earned a late draw in the second half though. Firstly on 84 minutes striker Theo Robinson found the net and then in stoppage time Marc Richards also scored.

Cheltenham held on to the three points though to end last season at the Jonny-Rocks on a winning note.

Watch the highlights from that game here:

Tickets in home areas for Saturday's match can be purchased from the turnstiles.

Fans with season tickets for Block 7 of the Completely Motoring Colin Farmer Stand will not be able to access this area of the stadium for this game. Supporters in this section will be able to use their season tickets in the Speedy Skips Stand.

The ticket office is open before the match from midday for fans wanting to buy tickets for the upcoming away match at Crawley or for Junior Robins membership and season tickets.

The club shop will also be open in the lead up to the game for supporters wanting to buy CTFC merchandise.

Be sure to pick up a copy of the club's new look match programme from outlets around the stadium, including the club shop.

Priced at £3, Saturday's issue includes a big interview with midfield man Conor Thomas as he gets to take on his old side, as well as further interviews with Gavin Reilly and Jacob Greaves.

There are also features with Ben Tozer and Scott Flinders, plus more from the chairman, Michael Duff, a look back at days gone by and plenty of other great reads to enjoy before the big kick-off. 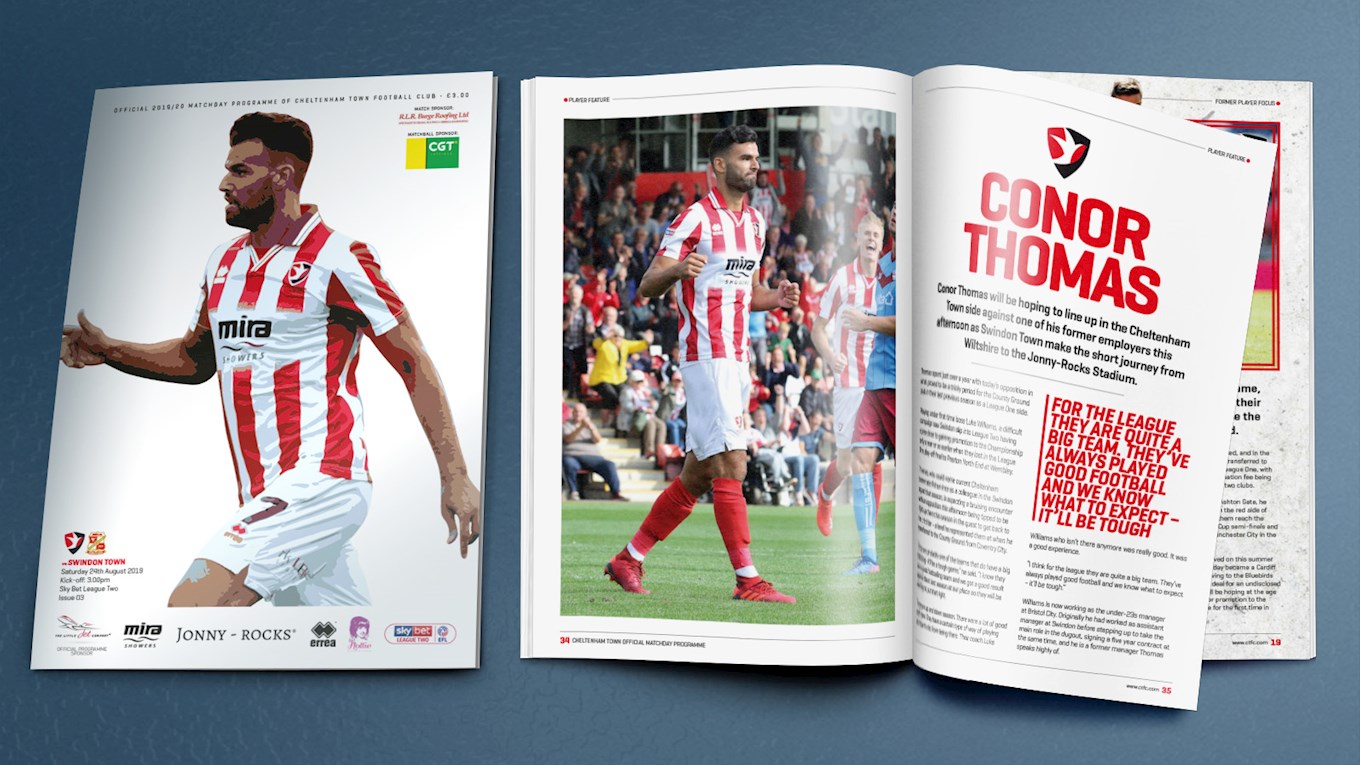 Stay up to date as events unfold by following @CTFCofficial on Twitter for match updates, team news, pictures and videos from the Jonny-Rocks. There are also goal updates available on Facebook during the game too.

Afterwards visit the club website to check out the match report and reaction from the manager and a member of the playing squad.

Listen in to match commentary on iFollow here.

An exhilarating first half at the Jonny-Rocks Stadium saw all four goals scored in the first 45 minutes in a West Country derby with Swindon Town that finished in a draw.

Twice behind, Cheltenham fought back to keep up their fine unbeaten home record against a good Swindon side who had Eoin Doyle to thank for both their strikes.

The Bradford City loanee put them in front early on, only for Chris Hussey to level for Cheltenham.

And after the Swindon front man had notched again on the stroke of half time Luke Varney popped up to crown an entertaining first half, with neither side able to find the winner in a second 45 minutes that saw Swindon reduced to ten men.

The large travelling Swindon support were given the start they were after when they saw their side nose in front after just six minutes.

Doyle got on the end of Lloyd Isgrove's cross and managed to beat Scott Flinders from close range to put his team a goal up.

Despite the early setback, Cheltenham quickly came into the game. Gavin Reilly, Ryan Broom and Varney combined well for the former to test Luke McCormick, while at the other end Keshi Anderson tested Flinders, who made a good save.

Hussey would draw the teams level though against his former club. A Charlie Raglan cross from the right missed everyone except the flying wing back, who fired a sweet strike into the bottom corner across goal to draw parity.

Now well settled in the game, McCormick was forced to deny Varney again with a good stop at his near post after the wily forward had got on the end of a Broom through ball.

The match was very much end to end though and on the half hour mark Kaiyne Woolery should have done better with a Tyler Reid delivery for the visitors that he headed off target.

Swindon would reclaim the lead though when Doyle claimed his second, and it was more or less a mirror image of the first. Isgrove crossed from the right and Doyle finished inside the six-yard box to put his team back in front.

Doyle should have scored his and Swindon's third not long after, but he got his finish horribly wrong when put through on goal, and the game would swing again when Cheltenham levelled.

Hussey did brilliantly down the left and crossed low for Varney who somehow managed to squeeze the ball in at the near post four minutes before the break.

The second Robins goal scorer was substituted at the break due to injury, and his replacement George Lloyd was the first to try his luck in the second half, only to see his low hit saved by McCormick.

Michael Doughty's free kick not long after went close as Swindon tried to go in front again, and they thought they had on 59 minutes when Mathieu Baudry's header found the net, only to be ruled out for an offside.

Within seconds though it was almost Cheltenham who had the ball in the net. Playing forward quickly after reacting well to the disallowed goal, only a last ditch McCormick claw away of the ball ensured it stayed 2-2.

A more settled affair in the second half saw Broom work an opportunity for Jake Doyle-Hayes to shoot wide from distance in a spell midway through the half that saw the away side reduced to ten men.

Unlike the opening hour, there was little drama in the final quarter of an hour, as both teams looked to find another key winning goal.

Jacob Greaves couldn't quite get on the end of a free kick delivery from substitute Josh Debayo, while Ellis Iandolo similarly struggled to connect with a driven Dion Conroy free kick towards the end for the visitors, with both sides sharing a point in a lively encounter at the Jonny-Rocks.

Secure your space for three of Cheltenham Town's huge League Two home fixtures this season with a special one-off ticket package for home matches against the Robins West Country counterparts.

Fans can buy a special package that guarantees their seat or terrace ticket for the home fixtures against Swindon Town, Forest Green and Plymouth Argyle.

The package offers supporters the chance to get their hands on tickets for three big home matches that are ahead for Michael Duff's side when the League Two campaign gets underway on Saturday.

Swindon are the visitors to the Jonny-Rocks on Saturday 24 August, and then fellow Gloucestershire side Forest Green are in town on Saturday 2 November.

Finally, the last game in the package is for when Plymouth visit on Boxing Day.

Prices for the package are:

This package offer is available until Monday morning when it will go off sale and tickets for the Swindon Town fixture on Saturday 24 August will then go on general sale.

To purchase the package click here online or visit the ticket office on Thursday or Friday between 10am and 3pm to purchase in person.