Having lost only once in 16 outings at home, the Robins have made home advantage count in recent months. 12 points clear from the relegation zone after Tuesday’s 1-1 draw with high flying Bury, Michael Duff’s sides noteworthy home form will be tested once again on Saturday.

Notts County, fighting for their lives at the foot of the table come to town, and are desperately looking for the performances and points that will see them edge away from the divisions bottom two.

Having already recorded wins over the likes of Mansfield and Forest Green recently, and taken more points off Lincoln and Colchester too, Saturday’s opposition are a team that have the ability to turn it on in the big games and the Robins players will be well aware of that risk this weekend.

Tickets for the game are available to buy online in advance here or on the turnstiles on the day.

Chris Hussey is facing a fight to be fit having pulled up with an injury that ruled him out of Tuesday’s game. Bristol City loanee Cameron Pring may therefore continue to deputise in his position.

Nigel Atangana and Alex Addai continue to miss out through injury, while back-up goalkeeper Rhys Lovett is back fit again having recently been nursing a groin issue.

Having recorded only six league victories all season, Notts County find themselves at the foot of the League Two table, less than a year after they reached the play-off semi-finals in the division, only to be denied a place at Wembley by the team that eventually gained promotion to League One, Coventry City.

Three of those six league victories have come against sides currently situated in the automatic promotion or play-off positions – Mansfield Town, Tranmere Rovers and Forest Green – but they’ve underachieved so far as they look to claw themselves back into safety, as the world’s oldest professional football club.

The man looking to guide them to safety is boss Neal Ardley. Appointed in November, he’s helped them to half of their league wins and has 11 games in which to try and keep the Magpies out of the bottom two.

He has plenty of options to choose from with the likes of experienced strike duo Craig Mackail-Smith and Jon Stead, as well as Dutch attacker Enzio Boldewijn, providing a threat in the top end of the pitch.

With January arrivals from Coventry City and Grimsby Town, Michael Doyle and Mitch Rose, they have recruited much needed knowhow of the division, while they can also turn to some of their loan additions in the shape of Ben Barclay, from Brighton & Hove Albion, Virgil Gomis of Nottingham Forest and 19-year-old goalkeeper Ryan Schofield from Huddersfield, to add to a squad who are five points adrift of safety.

They have only taken ten points on the road so far this season and have the worst away record in the division ahead of their trip to Gloucestershire.

A vital away win at Notts in mid-November kick-started a run of good form before Christmas under Michael Duff that helped the Robins drag themselves away from League Two’s bottom two.

Having not won in the league since early September, a 3-0 win at Meadow Lane was very welcoming for the Robins.

Luke Varney grabbed a brace to help Duff’s side put on an eyecatching away performance. The experienced front man headed in a Ryan Broom cross early on, and then finished off a cleverly worked corner kick to double the advantage in the second half. 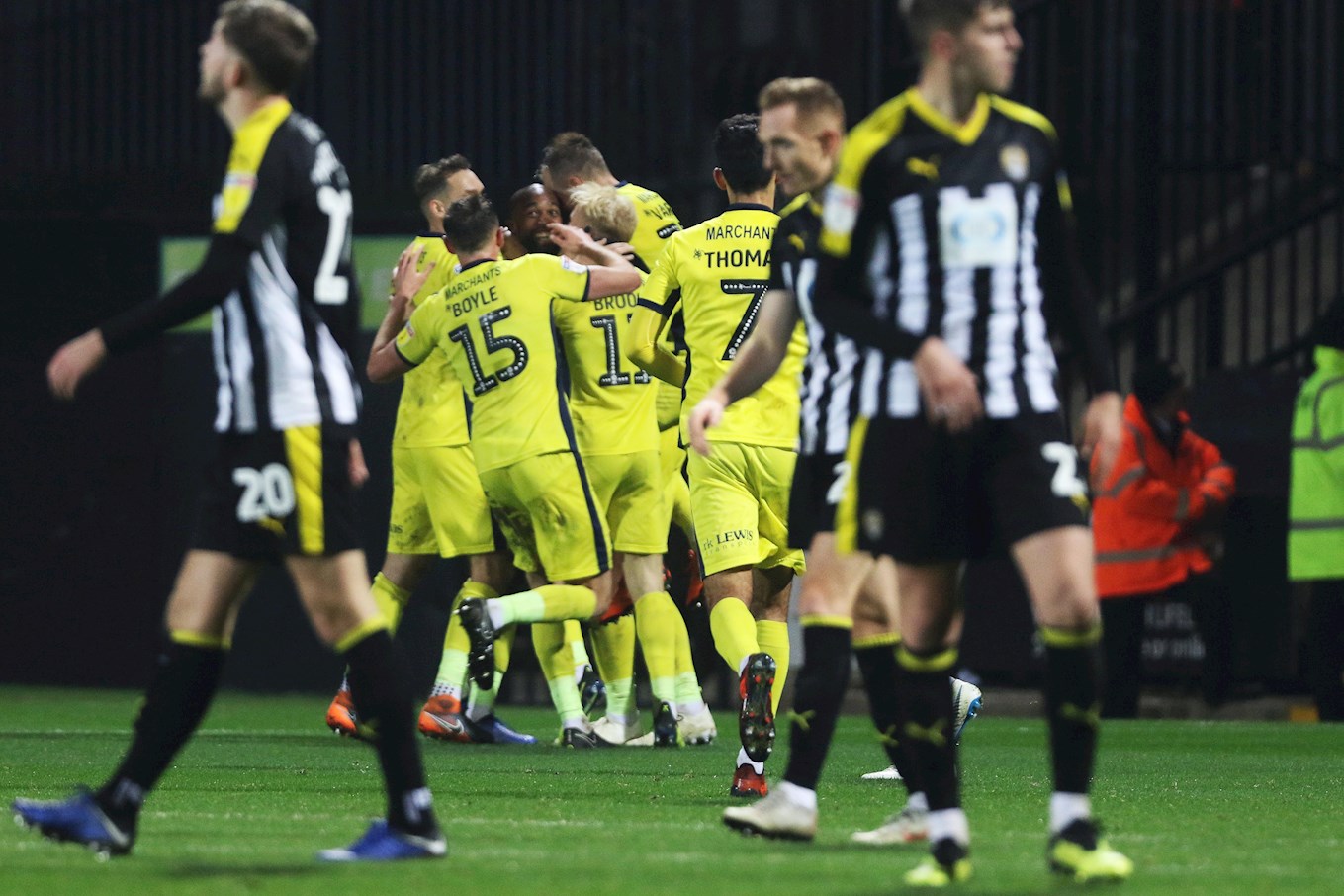 To cap the win off Tyrone Barnett finished well from another Broom assist to seal victory, which formed part of a four match consecutive winning run in both league and cup.

Revisit the highlights from that afternoon at Notts County earlier in the season:

You can buy online ahead of Saturday online here. Tickets are also available to buy at the turnstiles for all parts of the stadium.

The ticket office will be open before the match and after the full time whistle for a short while for fans who want to purchase tickets for upcoming home and away fixtures, including the trip to Newport County on Friday 15 March.

You can buy merchandise at the club shop too before the match.

Stay up to date with the action by following @CTFCofficial on Twitter. You can check out the team news, match updates and photos from the game by following the Twitter updates, while you can also view goal updates on the club’s Facebook page.

After the match visit the club website to check out a match report and for reaction from boss Michael Duff and a member of the playing squad.

Listen to full match commentary on iFollow or on BBC Radio Gloucestershire.

Leading scorer Luke Varney took his goal tally to 11 for the season as Cheltenham Town extended their unbeaten run at home to six matches against bottom side Notts County.

The Robins went into half time with a two-goal lead thanks to a Will Boyle header and a Varney penalty.

Billy Waters made it two goals in two as he comfortably slotted the ball past the Notts County keeper after a one-on-one, and substitute Tyrone Barnett poached a fourth after the visitors had scored a consolation through a Kane Hemmings.

Boss Michael Duff made two changes to the side that drew with Bury on Tuesday night, as top scorer Varney and the ever-present Chris Hussey returned to the side.

After a slow start to the game, Cheltenham had the first real sight of goal in the opening quarter when a tempting Charlie Raglan cross was begging to be turned in after Notts County keeper found himself in disarray coming to collect the ball, but the returning Hussey couldn’t direct his header on target.

Cheltenham were given the chance to utilise Ben Tozer’s long throw-in shortly after, and it certainly had the desired effect as defender Will Boyle was allowed a free run onto the ball, but a Notts County defender deflected Boyle’s header behind.

There was no stopping Boyle on the second attempt, however, as all three centre-backs were involved in a fine team move that gave the Robins the lead.

Captain Tozer poked the ball through the legs of Michael Doyle, before pulling the ball back to Raglan on the edge of the box, and his lofted delivery was thumped in off the head of Boyle.

It got even better for the Robins when striker Billy Waters was awarded a penalty after being clumsily brought down by a visiting defender. Varney took his tally to 11 goals for the season with ease, as he smashed the spot-kick in to send the Robins in 2-0 up at the break.

Cheltenham maintained a good level of tempo at the start of the second half; crosses and throw-ins were a common theme in County’s penalty area, as visiting keeper Schofield continued to look nervous collecting aerial balls.

Duff’s side all but put the contest out of County’s reach after Kevin Dawson played a splitting ball through to the onrushing Waters, and the striker confidently rolled the ball past the keeper to net Cheltenham’s third.

The third goal definitely shifted momentum in Cheltenham’s favour, although a tangle in the penalty area between Will Boyle and a Notts County player earned the visitors a penalty of their own, which substitute Kane Hemmings slotted past Robins keeper Scott Flinders to pull a goal back for the away side.

County did force Cheltenham to put in a solid defensive shift despite the comfortable lead, and an important interception by Raglan stopped a potential fightback from the visitors as he denied a certain shot on goal following a counter-attack from Neal Ardley’s men.

Despite a quiet period towards the final 15 minutes of the game, the Robins restored their three-goal advantage and scored their fourth to guarantee all three points after a corner in the box caused havoc, and substitute Tyrone Barnett was on hand to prod the ball home.