Northampton Town are the visitors to the Jonny-Rocks Stadium on Saturday as Cheltenham look to make it seven games unbeaten at home (kick-off: 3pm).

The Robins have taken 16 from a possible 18 points from their most recent home outings but face a stern test against a Northampton side flying up the league table this weekend.

It’ll be just over a week since the 1-0 loss at Newport County denied Michael Duff’s men a point on the road in south Wales, and the squad will be focused on getting more points on the board by continuing their fantastic home record.

Tickets for the match are available to buy online in advance and from the turnstiles on matchday.

Billy Waters misses out as the on loan forward can’t play against his parent club, while Alex Addai and Nigel Atangana are the only other players unavailable due to injuries.

For Ben Tozer, Saturday’s game will see him line up against a club he represented over 150 times in three separate spells, which included two loans while registered with Newcastle United.

Unbeaten since the start of February, Northampton have won five and drawn three of their last eight games and head to the Jonny-Rocks Stadium at the top of the current form table. Their last game involved a trip to Grimsby last week that ended in a 0-0 draw.

Before that they had registered four consecutive wins and currently have 52 points after 38 games – meaning they’re just six points off the play-off places with eight games to go.

A late surge for the play-offs would represent a tremendous achievement for a team that started the campaign slowly under former manager Dean Austin. He was replaced by Bristolian ex-England defender Keith Curle in October and he’s helped a team relegated from League One last season force themselves into the play-off reckoning.

They’ve done so with a former Cheltenham youngster in Andy Williams who is their leading goal scorer this season with nine goals, and with a squad that features the likes of former Watford midfielder John Joe-O’Toole and ex-Aberdeen centre back Ashley Taylor.

At the back former Wales under-21 international goalkeeper David Cornell has established himself as a number one, while in front of him the likes of David Buchanan brings knowhow of League football from lengthy spells at Bury and Preston North End.

The Cobblers away record is ninth best in the division and their last trip to the Jonny-Rocks Stadium, in October 2014, saw them beaten by the Robins who earned three points with a 3-2 win. Terry Gornell snatched a double, while John Marquis also hit the back of the net.

The Robins second win this season came against Northampton at Sixfields back in early September. Caretaker manager Russell Milton helped secure a result that saw the club leapfrog the Cobblers in the league table.

Will Boyle put Cheltenham ahead in the first half after he finished off Jordon Forster’s knockdown, however he was a part of the incident that led to Northampton drawing level from the penalty spot as his short back pass led to a spot kick that was successfully converted by Kevin van Veen.

Another penalty as the game reached 77 minutes proved crucial though. Conor Thomas was cool from the spot to fire in, and Kelsey Mooney added a third in the final ten minutes when the young Aston Villa loanee knocked in from close range.

Watch the highlights back from that game earlier in the season:

Buy online in advance by clicking here for the game. You can also buy on the day at the turnstiles, while the ticket office will be open for fans wanting to buy tickets and away travel for upcoming home and away fixtures.

The club shop will also be open before the match and after the game for a short while selling merchandise and gifts.

Yeovil Town continue their quest to pull away from danger but face a tricky trip to MK Dons this weekend who are themselves looking to force their way into the top three. There’s an 8th against 5th clash in Essex as Colchester host Tranmere Rovers, while bottom club Notts County welcome play-off positioned Exeter and second from bottom Macclesfield host a Stevenage team looking to get into the play-off positions. Here is the full League Two fixture list this weekend:

Stay up to date throughout the game and with team news before kick-off by following @CTFCofficial on Twitter. You can also catch goal and team updates on the club’s Facebook page, while after the match you’ll be able to read a match report and get the full reaction from Michael Duff on the club website.

Listen to full match commentary through iFollow or by tuning into BBC Radio Gloucestershire’s coverage of the game.

Dean Bowditch scored pulled one back for the away side in the 89th minute, netting a free kick.

The win see’s the Robins stay 17th in the table, just four points behind the Cobblers who drop to 13th - as their fine run of form came to an end.

Both teams started brightly, Cheltenham’s Chris Hussey registering the first shot of the game with a volley that went over the bar, and Jay Williams followed it up for the away side heading a corner straight towards Scott Flinders.

Tyrone Barnett then fired his first shot towards the Northampton goal, after some good hold up play from Luke Varney, Barnett struck his effort well, but it was well saved by David Cornell.

Some good pressure from Kevin Dawson down the right-hand side led to the opening goal of the game, he latched onto a poor touch from a Northampton midfielder, ran down the wing, and crossed to find Luke Varney, the forward made no mistake netting his 12th of the season.

Cheltenham continued to press the Northampton back line, good crosses coming from Ryan Broom on the right.

Cheltenham’s pressure paid off as Tyrone Barnett earned a penalty, Ryan Hughes brought down the forward in the box, the defender was too slow with his challenge and received a yellow card for the late foul.

Varney stepped up and struck the penalty straight down the middle fooling Cornell in goal, doubling the Robins lead.

Cheltenham continued to come forward, another Ryan Broom cross found Barnett at the back post, but his leap and header went wide of the target.

Barnett then turned provider early I the second half. He laid the ball back to Broom who took one touch and struck goalward with his left foot, but the shot went wide of Cornell’s post.

Cheltenham were enjoying their best spells on either wing as the second half went on, Chris Clements back post cross was brought down by Varney, he got the shot away, but it went straight to Cornell in goal.

Tyrone Barnett continued to work hard in the Cheltenham front line, he rolled the ball through to Dawson, who’s shot was parried out for a corner by the Northampton number one.

Chris Clements was next in line to test Cornell, his free-kick was flying in the top corner if the Cobblers goalkeeper didn’t match it with a good stop.

From the resulting corner Tyrone Barnett got a well-deserved goal, he leapt highest to win the header and Cornell couldn’t keep this one out.

The away side offered very little in the first 30 minutes of the second half, so much so that home fans jeered when Scott Flinders got a touch of the ball in the 73rd minute.

In the games dying moments the away fans had something to cheer, as Dean Bowditch stepped up and smashed home a free kick from 25 yards.

Buy in advance today from the ticket office or online for Saturday's League Two encounter with Northampton Town at the Jonny-Rocks Stadium.

The in-form Cobblers make the trip to Cheltenham, six points off the play-off places, for a 3pm kick-off.

Michael Duff's charges are six unbeaten at home and will eye up Saturday's opponents as another side to topple on home turf this season having already taken points off MK Dons, Bury and Forest Green this term.

Tickets can also be bought online here. Those buying in advance of the game are entered into the draw to win a full platter voucher for Nandos, Cheltenham - with the winner being announced at half time on the big screen at the stadium.

Fans can also buy on the turnstiles on the day. Turnstiles open at 1.30pm. 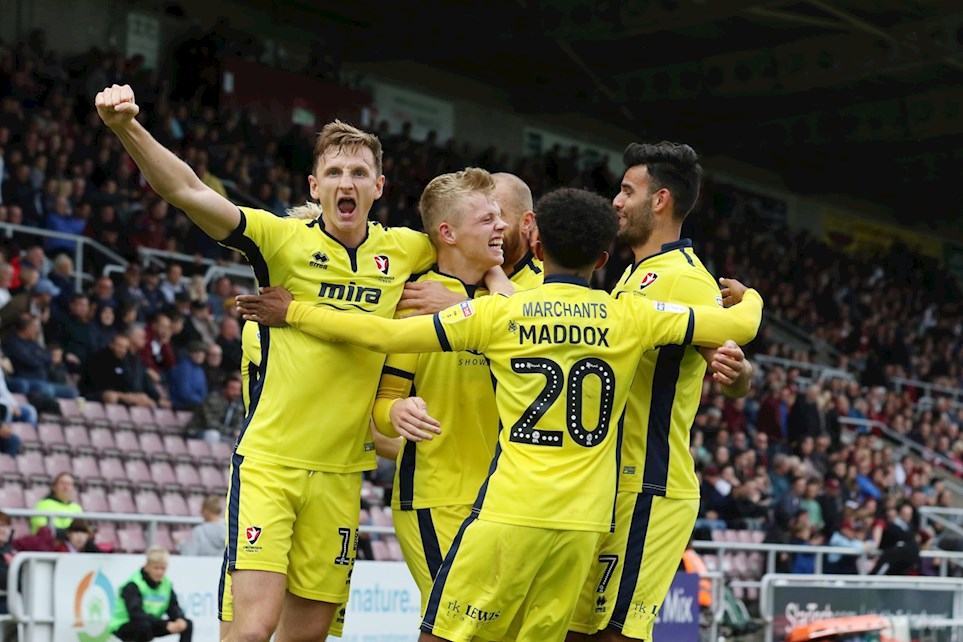 
League Two's most in-form side, Northampton Town, are the visitors to the Jonny-Rocks Stadium on Saturday and tickets for Cheltenham's next game are now on sale.