At the weekend the Robins made the trip to the third place Mansfield Town, and despite a courageous second half comeback, left the One Call Stadium without any points.

This evening's task is again another tricky one against a Bury team who are flying at the top end of League Two.

With Cheltenham having delivered regularly of late on home turf though it's all set to be an intriguing contest under the lights at the Jonny-Rocks.

Tickets are available online for tonight's match here, and will also be on sale at the turnstiles.

There are no fresh injury concerns following Saturday’s game. Rhys Lovett is looking to shake off a groin injury that ruled him out of the match at the One Call Stadium, while Nigel Atangana and Alex Addai are both unavailable with longer term problems.

Michael Duff spoke to the press on Monday morning. Watch his pre-match press conference below:

Riding high in the automatic promotion places, Bury’s first season back in League Two since the 2014-15 campaign looks like it potentially could be only a short stay as long as they maintain their excellent run of form that has seen them win eight and draw two of their last 10 League Two matches.

Manager Ryan Lowe has steered the Bury ship well so far this season since his permanent appointment following the Shakers relegation from League One at the end of last season. It is the 40-year-old’s first permanent managerial role following a lengthy playing career in the Football League with the likes of Shrewsbury, Sheffield Wednesday, Tranmere and three spells with his current employers.

A former striker, it is one of Lowe’s experienced heads up top who has led the line this season. With 17 goals former Bristol City hit man Nicky Maynard has played a key role in a lively attack that the Robins back line will have to contend with.

Attack minded midfield men Jay O’Shea and Danny Mayor provide plenty of creativity and success in front of goal too and are backed up with the likes of Sheffield United loanee Caolan Lavery and former Stoke City youngster Dom Telford.

Experience of life at a higher level is a theme throughout much of their squad with ex-Crystal Palace midfielder Neil Danns their skipper, while Jermaine Beckford and the much travelled Nicky Adams feature on their roster too, as well as January loan signing from Rangers, Jordan Rossiter.

They boast the best home record in the division, and the fifth best away record, having accumulated 25 of their 66 points on the road this season.

With eight wins from 15 previous meetings, it’s the Robins who have the better record between the two sides. In those clashes Bury have registered six wins, while only once, the club’s very first league meeting in September 2003, did both sides share a point.

The meeting between the two teams earlier in the campaign saw Bury blow the Robins away with a 4-1 midweek victory, ending a run of back-to-back three points for Cheltenham from the 2013-14 campaign.

Apart from an April 2010 clash at the Jonny-Rocks Stadium, each of the Robins eight wins has been by a single goal margin. That win in April 2010 saw goals from Justin Richards, Matt Thornhill, Josh Low (2) and Barry Hayles claim maximum points for Cheltenham in a 5-2 win. 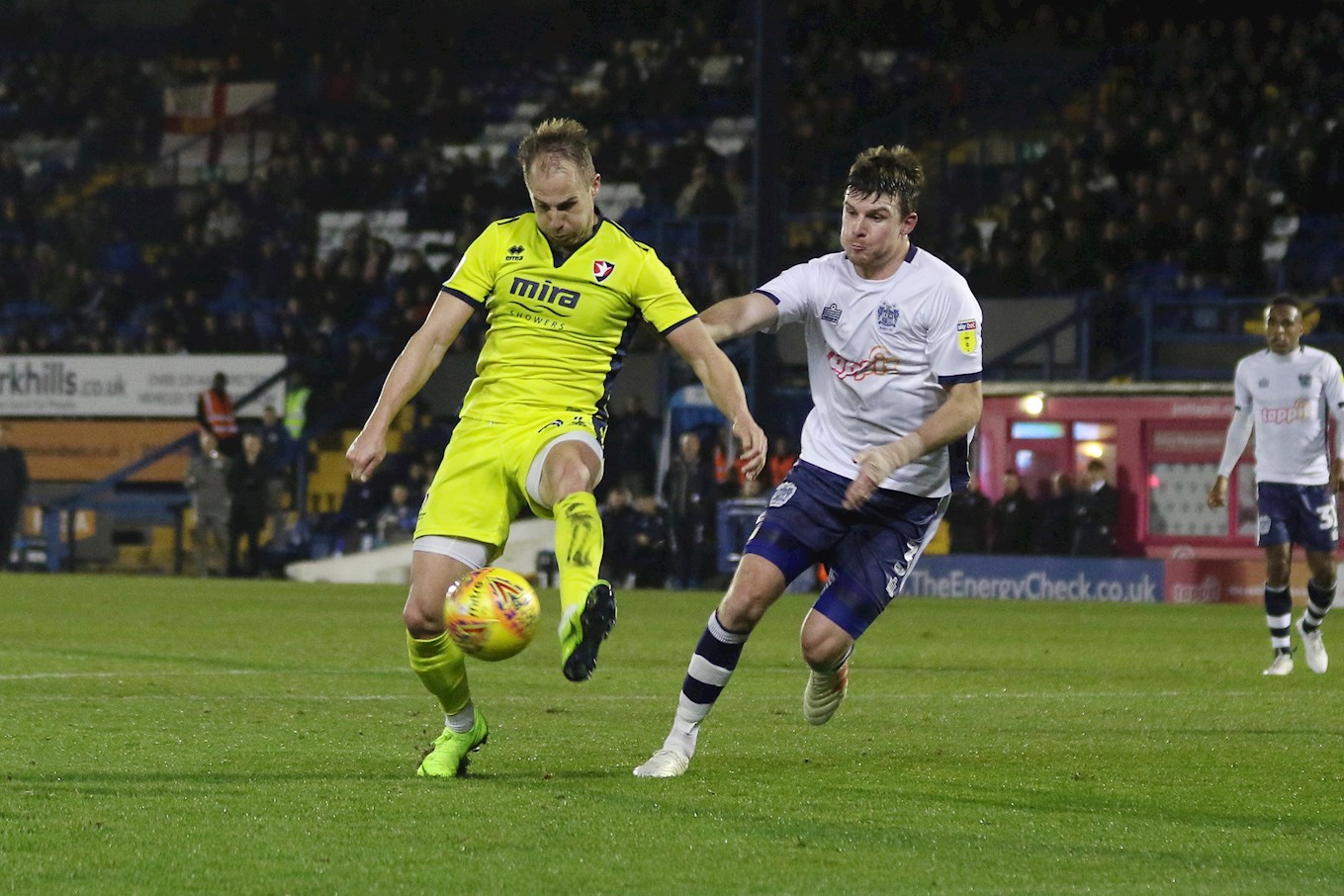 Buy in advance online for Tuesday’s fixture and be in with a chance of winning a Nandos full platter voucher for Nandos, Cheltenham. You can buy online by clicking here.

Tickets are also available from the turnstiles on the night, while the ticket office will be open ahead of kick-off, and after the match, for fans wanting to purchase tickets for upcoming matches and away tickets and travel.

The club shop is also open before for supporters wanting to buy club merchandise.

Check out @CTFCofficial on Twitter for team news, updates and action images throughout the night, while you can also stay up to date with when the goals go in on the club’s Facebook page too. After the match visit the club website to see a match report and reaction to the result.

You can also take in full match coverage by using , as well as listening to commentary on BBC Radio Gloucestershire.

Nicky Maynard thought he gave the away side the lead with 10 minutes to go, but his calm finish was ruled out for offside.

The draw see’s Cheltenham stay in 17th ahead of bottom of the league Notts County’s visit on Saturday.

Cheltenham made four changes to the team that lost 4-2 to Mansfield on Saturday, Cameron Pring, Chris Clements, Waters and Tyrone Barnett came in, whilst Chris Hussey, Connor Thomas, Jacob Maddox and Luke Varney missed out.

Bury were the first team to create a clear chance, good play on the left-hand side from Danny Mayor saw him create a crossing opportunity, he whipped the ball in, and Jay O’Shea’s strike was sent for a corner by Ben Tozer.

Scott Flinders was then called into action again, Byron Moore firing at goal from close range but Flinders kept it out.

From the resulting corner Bury found their first goal, the ball was crossed back in and defender Scott Wharton rose highest to head past Flinders.

Bury had a fair share of the chances early on, Danny Mayor causing havoc on the left wing

Ben Tozer’s throw in posed problems for Bury’ s back line, first a header from a climbing Cheltenham forward struck the bar, before a strike from Kevin Dawson went wide of the target.

Billy Waters was next to test Joe Murphy, he latched onto a through ball and struck it towards goal, but the goalkeeper scrambled to make the save.

It was Waters who pulled Cheltenham level, in the 33rd minute, a scramble in the box and it fell to the forward at the back post, he tapped home with ease to even up the scores.

Ben Tozer struck Cheltenham’s first chance of the second half, the ball came back to him from his throw in, he smashed it towards goal from 30 yards, but it was well over the bar.

Waters then came close to his second, Cameron Pring passed it into him, with his back to goal, he did well to turn and shoot, but it was well met by Murphy in the Bury goal.

Bury came back into the game with a shot from Jay O’Shea, he picked the ball up on the edge of the box and struck it towards the top corner, but despite a frantic dive from Scott Flinders, there was no need to panic as it flew over the bar.

Nicky Maynard then thought he put Bury back in the lead in the 80th minute, but his tap in at the back post was ruled out for offside after a well struck free kick fell at the forwards feet.

Cheltenham worked hard to keep Bury at bay late on, the away side dominated the play, forcing 10 corners in total to Cheltenham’s zero.