It’s a 21st against 23rd battle and the first of three consecutive home games as former England defender Sol Campbell brings his Silkmen side to Gloucestershire.

Boss Michael Duff has called on fans to get behind his team this weekend for what represents a huge opportunity to pull away from the League Two relegation zone.

Tickets are available to purchase in advance for Saturday and from the turnstiles on matchday.

Sean Long, Will Boyle and Nigel Atangana continue to miss out through injury. Despite playing in the Gloucestershire Senior Cup in midweek, it may be too soon for Manny Duku to be involved.

Charlie Raglan is expected to make his home debut since joining on loan from Oxford United until the end of the season.

It had taken Saturday’s opposition until their 19th match in all competitions for them to register their first win this season having struggled on their return to the Football League following their eye-catching National League championship title win last term.

John Askey had led them back into League Two but departed in the summer for Shrewsbury, only to be replaced by former Robins manager Mark Yates, who struggled to make an early season impact.

But Sol Campbell’s appointment at the end of November has reenergised the Silkmen, and they’ve begun to claw themselves back into contention for safety when it appeared they could be cut adrift in the early part of the season. Campbell, a three time FA Cup winner, two time Premier League winner and the possessor of 73 caps for England has been a notable appointment at the foot of League Two, but he’s made an immediate impact in Cheshire.

He has recently appointed former Manchester United and Champions League winner Andy Cole to his coaching staff. Cole will be aiming to bring some attacking guidance to the Macc attackers who include former Hartpury College student Scott Wilson and ex-Torquay front man Tyrone Marsh.

Their midfield presence is aided by the tricky Elliott Durrell, the energy and experience of Danny Whitaker and inclusion of former Barnsley youngster Callum Evans. At the back Nathan Cameron, Fiacre Kelleher and former Forest Green full back Jared Hodgkiss look to keep the goals out in front of Man United loanee goalkeeper Kieran O’Hara.

Three former Robins players feature in their squad. Keith Lowe made over a hundred appearances at the club while Koby Arthur was a loanee from Birmingham City and defender Jamie Grimes spent last season at Cheltenham.

Across the bottom tier of the Football League and one season in the National League, the Robins boast the dominant recover over Macclesfield. In total the Robins have registered 11 wins in previous meetings, while there have also been five draws and five defeats.

During the National League title winning campaign the Robins did the double over the Silkmen, something also achieved in the 2003-04, 2004-05 and 2011-12 seasons. 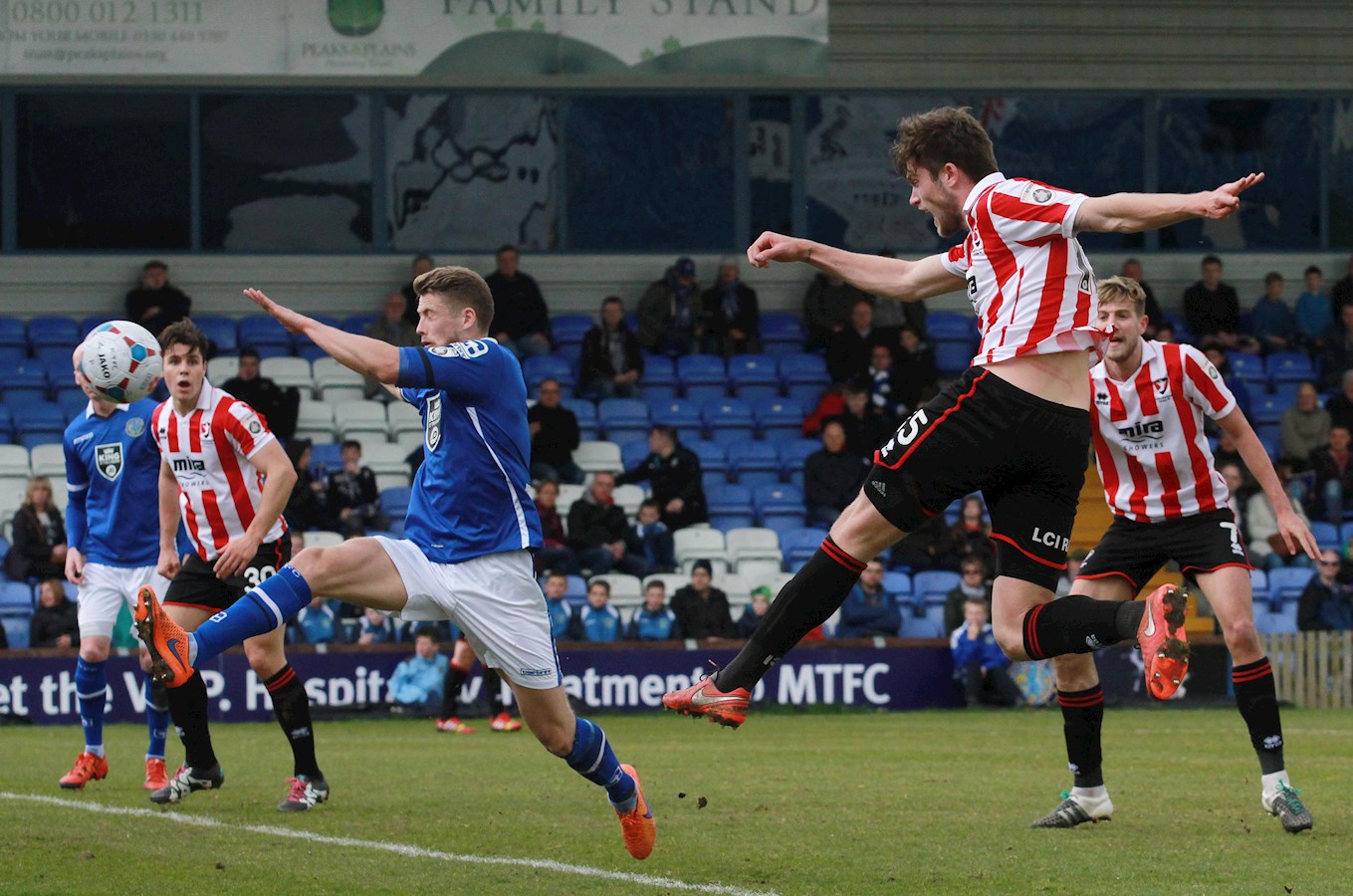 When the two clubs met earlier in the campaign it was in the first month of the season at Moss Rose where a crowd of 1,496 saw Manny Duku’s late equaliser rescue a point after Danny Whitaker had given Macclesfield a first half lead.

Revisit the highlights from that draw below:

Buy in advance online for Saturday by clicking here. Tickets are also available to purchase on the turnstiles in all areas of the stadium.

The ticket office is open from midday, as well as the club shop, for fans wanting to buy tickets for upcoming home and away fixtures and merchandise.

Stay up to date with the action by following @CTFCofficial on Twitter. You can see the team news, view match updates and live photos on the club’s Twitter account, while you can also catch updates on the official Facebook page too. Visit the club website after the game for full reaction to the full time result.

Listen to commentary via iFollow online and on BBC Radio Gloucestershire.

Charlie Raglan netted the winner on his home debut as Cheltenham Town staged a remarkable second half comeback against ten-man Macclesfield to secure three massive points at the Jonny-Rocks Stadium.

The visitors finished the first half two goals to the good after goals from Michael Rose and Scott Wilson but went off a man down after Nathan Cameron prevented Jacob Maddox running in on goal.

But a brilliant second half display saw Luke Varney, Maddox and Raglan get on the scoresheet to win the match for Cheltenham in arguably the most entertaining match of the season so far.

After a cagey opening ten minutes, the visitors opened the contest through Michael Rose who converted from the spot after Robins stopper Scott Flinders had taken out Scott Wilson.

The Robins were handed an advantage just moments later; Macclesfield defender Nathan Cameron threw out an arm to stop the onrushing Maddox latching onto the bouncing ball, which compelled referee Anthony Backhouse to show Cameron a red card.

But it was the visitors who, out of nowhere doubled the lead after a poor pass from Cheltenham keeper Flinders fell to visiting forward Scott Wilson, who chipped the ball over the onrushing stopper to give Macclesfield a two-goal advantage.

Luke Varney tested Kieran O’Hara’s handling with fifteen minutes of the first half remaining after he turned well to produce a stinging effort at goal, but the visiting keeper held onto it well to stop Cheltenham getting back into the game.

A sad moment followed in the match after Jordon Forster fell awkwardly after a collision with a Macclesfield attacker which stopped the flow of the game and consequently meant the Robins defender was stretchered off.

Varney came inches closer to giving Cheltenham a lifeline after a good turn of pace by Alex Addai got him to the byline, but Varney failed to convert his low cross into the six-yard-box.

Substitute Kevin Dawson had the last chance of the half when he stretched to get on the end of a mishit from Chris Clements, but he failed to get a strike on target as the Robins went in at the break two goals down.

Cheltenham came storming into the second half and made a change when forward Billy Waters came on to replace Conor Thomas.

Waters did well to head a throw-in onto the onrushing Dawson, and his fierce drive forced O’Hara to fumble his effort away.

The Robins were back in the game too courtesy of a fabulous effort from Varney. Following some good build-up play down the right from Ryan Broom, the wing-back curled a cross into the area which was met spectacularly by Varney with a scissor kick to put the Robins back in the game.

It was nearly a copy of the Forest Green Rovers game as Cheltenham went on the hunt for an equaliser, but Maddox hit his effort straight at O’Hara – he made no mistake though in levelling the contest just minutes later.

Full-back Chris Hussey put a looping cross to the back post which Varney headed down into the path of Maddox, and the attacking midfielder volleyed the ball into the ground and into back of the net as Cheltenham got a deserved equaliser.

Cheltenham’s push for a winning goal ensued and visiting stopper O’Hara was certainly kept busy as he watched Alex Addai’s stinging effort fly past the post, and he did well to tip over a Clements free-kick which was heading for the top corner.

The brilliant saves continued for O’Hara as he somehow managed to deny Dawson from point-blank range, but he could do nothing to stop the Robins completing the comeback.

After a Cheltenham corner fizzled out to the edge of the area, Addai was waiting to curl the ball back into the danger zone and defender Charlie Raglan managed to scramble the ball over the line to complete the turn around and send the Robins faithful into raptures behind the goal.

The fifth goal of the game turned out to be the last bit of key action and it was a resilient defensive display from the Robins defence between then and the end of the match, but they held on to secure three massive points in their bid to secure safety.