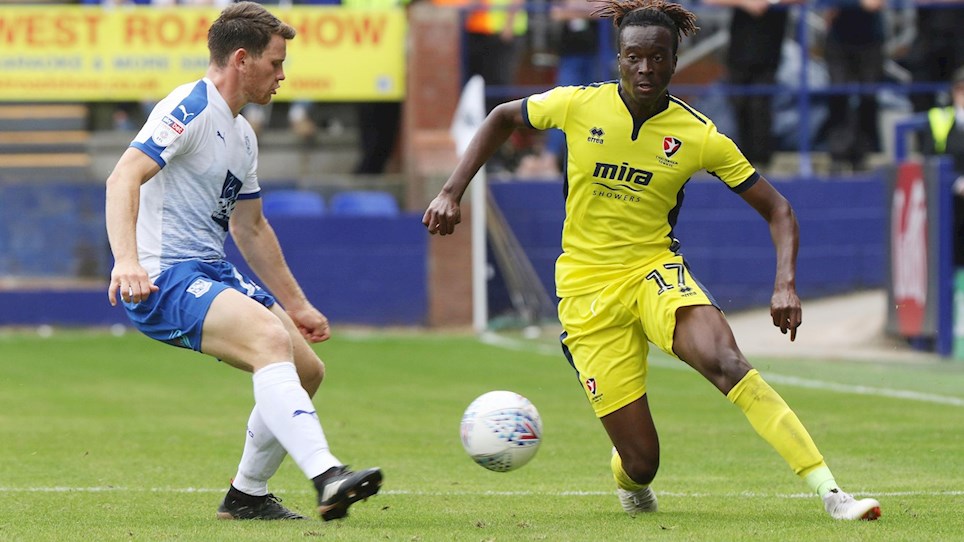 
Hihglights of Cheltenham Town's defeat to Tranmere Rovers at Prenton Park are available NOW on iFollow. Subscribe and click on the link above.

Cheltenham Town fell to a second defeat of the season as James Norwood scored the only goal of the game in an entertaining Sky Bet League Two encounter at Prenton Park.

In-form Norwood smashed home an angled drive from 20 yards out for his third goal in two games to give Rovers the lead early on.

Liam McAlinden and Alex Addai both curled narrowly wide for the Robins in response while Ollie Banks rattled the post late on for Tranmere.

Cheltenham were also dealt a bad injury blow as Dutch striker Manny Duku was carried off at the end of the first half with an arm injury.

Manager Gary Johnson made one change for the fixture as Kevin Dawson came into the starting line-up for Alex Addai, who moved to the bench.

Tranmere, roared on by a vocal and sizeable crowd, flew out of the traps and 40 seconds in created room out wide for Connor Jennings to cross just over the head of Jonny Smith.

Captain Johnny Mullins was at his best to repeatedly turn away crosses and blocks shots before Duku launched a counter, after picking off a poor back pass, before being crowded out as he looks to turn inside and shoot.

Mullins continued to lead from the front, cutting out a cross to the lively Norwood before throwing himself in front of a low drive from Jennings.

But there was nothing he could do about the opener as the in-form Norwood arrowed a first time strike into the net from 20 yards after collecting the loose ball after Boyle and Cole Stockton competed for a long ball.

Rovers kept the pressure on, this time Jonny Smith was denied by Aden Baldwin after he hit a low shot.

A first real chance for the Robins saw Dawson cross and Boyle flick a looped header that was clawed out by a retreating Davies in the Tranmere goal.

Flinders had to be at his very best to deny former Cheltenham man Smith, as he tipped an angled shot inches wide. Then, from the corner, Dawson cleared off the line from Jennings after a scramble in the six yard box.

The Cheltenham stopper, outstanding on the opening day, then denied Stockton from eight yards after he twisted and turned to open up room for a shot.

Cheltenham looked for a response just before the break with Dawson heading across the area dangerously before Maddox won a free kick that McAlinden crossed for Duku to test Davie at the back post.

It would be Duku's last involvement in the game, as he was taken off after a nasty fall over the advertising boards and later stretchered away to a waiting ambulance.

The Robins fashioned an early chance as Maddox was sent to the turf by Jay Harris. But the free kick at an angle from 20 yards from Tozer was charged down.

Tranmere immediately broke up field and Norwood fired wide from the edge of the penalty area as Flinders raced out to cut down the angle.

Maddox looked a real bright spark for the Robins as he won repeated free kicks with his quick feet, one of which was floated to Mullins who headed back across goal.

Cheltenham created their best chance of the game just after the hour when Tozer intelligently rolled in McAlinden and from the angle he curled just inches wide.

Flinders again had to be at his very best to deny Norwood, racing off his line to deflect a shot wide when the Tranmere man was clean through.

Home skipper Stephen McNulty picked up the game's first yellow card for hauling down Kalala when he burst through the middle. However, the resulting free kick from substitute Broom flicked the top of the wall and floated over.

Addai was then close to opening his Cheltenham account with a curled shot just wide from the edge of the box.

Ollie Banks almost settled the game as he struck the left-hand post with a thunderous hit from 25 yards out five minutes from time.


Hihglights of Cheltenham Town's defeat to Tranmere Rovers at Prenton Park are available NOW on iFollow. Subscribe and click on the link above.

Tickets for this match at Prenton Park are on sale NOW from our Ticket Office and will remain so until 1pm on Friday.

Prices from our Ticket Office can be seen below and fans are advised that there will be a £2 price increase if bought on the day at Tranmere.

Supporters are advised that the Young Person category will require ID and Tranmere are very strict on this with home and away supporters. They do not accept student ID - it must have their date of birth on. If supporters cannot provide ID, they will be charged the full adult price.

Tramere’s disabled concession is based on middle or higher care component or PIP letter. Tickets for these can only be purchased on the phone (0151 609 3328) however Tranmere will need proof beforehand. Supporters can scan over one of the above letters to them at tickets@tranmererovers.co.uk.

Tickets are based on the disabled price, however if supporters are Under 18/Under 12 they are charged this age category. All disabled tickets come with a free carer.

Parking is available at Tranmere on the day, costing £5 and is on a first come first serve basis (including disabled bays). The surrounding residential area is all permit holders parking and they are very vigilant on match days. Tranmere would not advise anyone risking it as they will more than likely receive a parking fine!

We also a supporter bus going to Tranmere, that will leave at 10am, with places available now:

For further information call the Ticket Office at the Jonny-Rocks Stadium on 01242 573558 (option 1) or email tickets@ctfc.com