Another League Two season draws to a close for the Robins on home soil with an exciting derby game to end home affairs ahead of next week’s final game of the season at Stevenage.

Michael Duff’s side will be going all out to end the season on a high at home and to keep up their excellent home form in 2019. It’ll be difficult though against a Swindon team who are up there as one of the best teams on the road in the league.

Saturday afternoon’s match is the first of a double-header at the Jonny-Rocks on Saturday. In the evening at 7pm Cheltenham Town Ladies take on Swindon Town Ladies in their final FA Women’s National League Division One South West game – entry to that match is free so it’s hoped that supporters will come along and support both Robins sides this Saturday.

The club’s end of season awards will be made on the pitch before kick-off. The presentations are taking place at 2.30pm and fans are being encouraged to head into the stadium early to find out who this year’s winning players are.

Sean Long, Chris Hussey, Kevin Dawson and Jacob Maddox are all in line for a potential return to the squad after they missed out on Monday.

Tyrone Barnett and Nigel Atangana miss out through injury, while Alex Addai is in contention after he was named as a substitute at Morecambe.

A run of four straight draws has ruled out Swindon’s play-off ambitions. The Wiltshire side looked to be building momentum to claim a late place in the division’s top seven, especially after an eye-catching away win at Bury, however four consecutive draws and defeat at Crewe Alexandra on Monday means they’re set for another campaign in League Two next season.

Boss Richie Wellens has been in position since mid-November and is expecting a revamp of his squad for their 2019/20 campaign where challenging for promotion is once again a priority. For Saturday however he leads a team into battle at the Jonny-Rocks that lies two places above Cheltenham – seven points ahead. 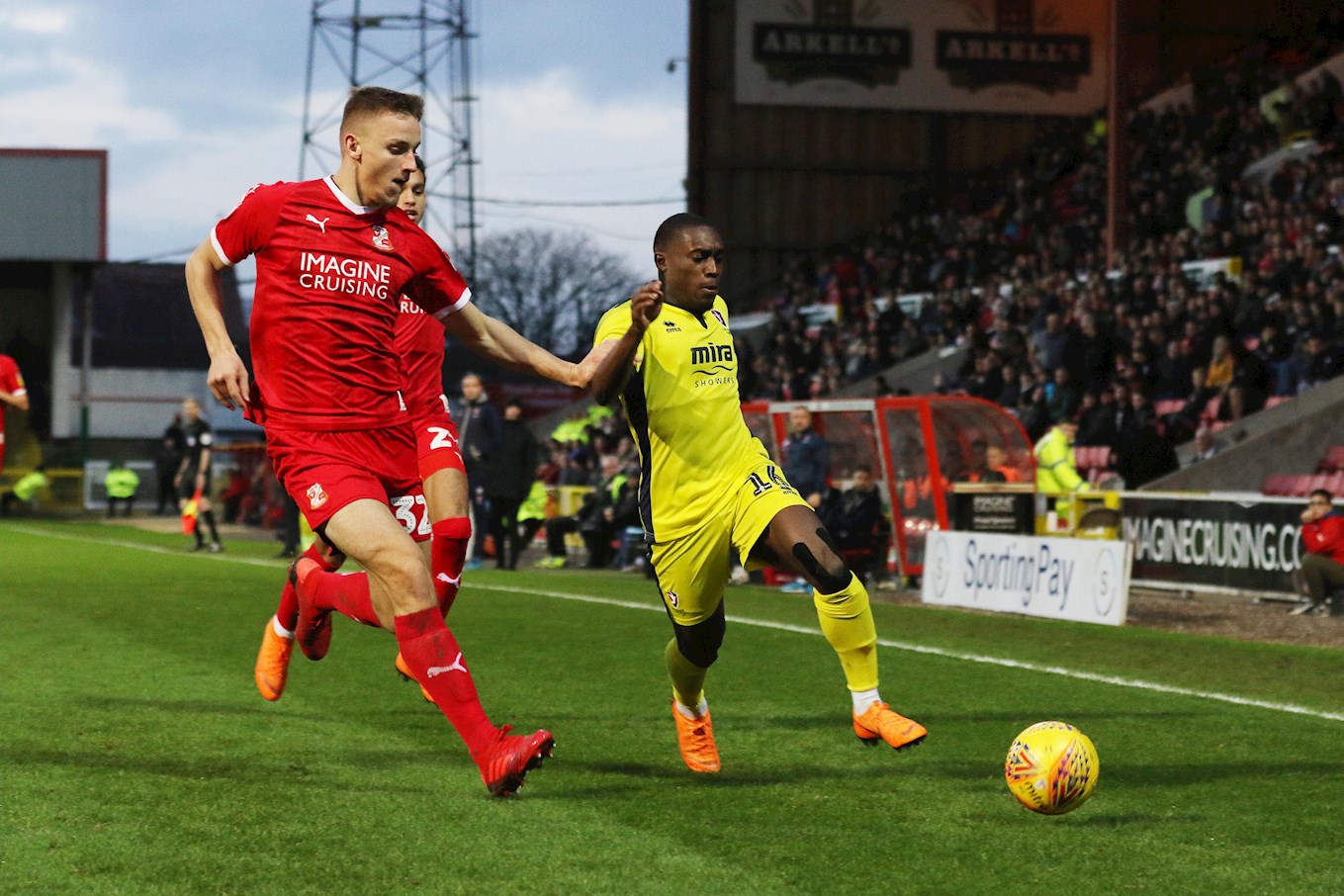 Midfield man Michael Doughty is their leading goal scorer this season, and the 26-year-old is a vital cog in the way they play. He lines up in a midfield that also includes former Exeter City man James Dunne, plus a number of other options including Ollie Lancashire, Danny Rose and ex-Chesterfield man Jak McCourt.

Their front line will offer a threat with their speed and directness. Theo Robinson is well travelled in the Football League and Scotland, while they paid a six-figure fee to land the signature of Kaiyne Woolery, in the summer of 2017. Keshi Anderson and the experienced Marc Richards are other possibilities to lead the line.

Swindon boast one of the best away records in the division having picked up 31 points on the road this season.

In six previous visits to the Jonny-Rocks Stadium in all competitions, Cheltenham have claimed five wins and drawn once when Saturday’s opponents have made the short journey into Gloucestershire.

One memorable clash came in November 2014 when a Swindon side in League One and managed by Mark Cooper visited for an FA Cup first round game against League Two Cheltenham, that saw them smashed 5-0.

Watch the highlights back from that game in November 2014:

Tickets are available to purchase online for Saturday’s match and from the turnstiles on matchday.

The ticket office will be open for collections, with season tickets and away tickets and travel for next weekend’s game at Stevenage also on sale.

The club shop is open before kick-off selling Robins merchandise and match programmes are also available at a price of £3 around the stadium.

Keep up to date on matchday by following @CTFCofficial on Twitter. Goal updates and team news will also be available to view on the club’s Facebook page. Following the full time whistle you can check out the club website to read a match report and see reaction to the result.

Listen to radio commentary online by tuning in on iFollow, or on BBC Radio Gloucestershire.

Season tickets for the Robins 2019/20 campaign are now on sale. Get behind Michael Duff's team for next year's League Two season. Find out more online. 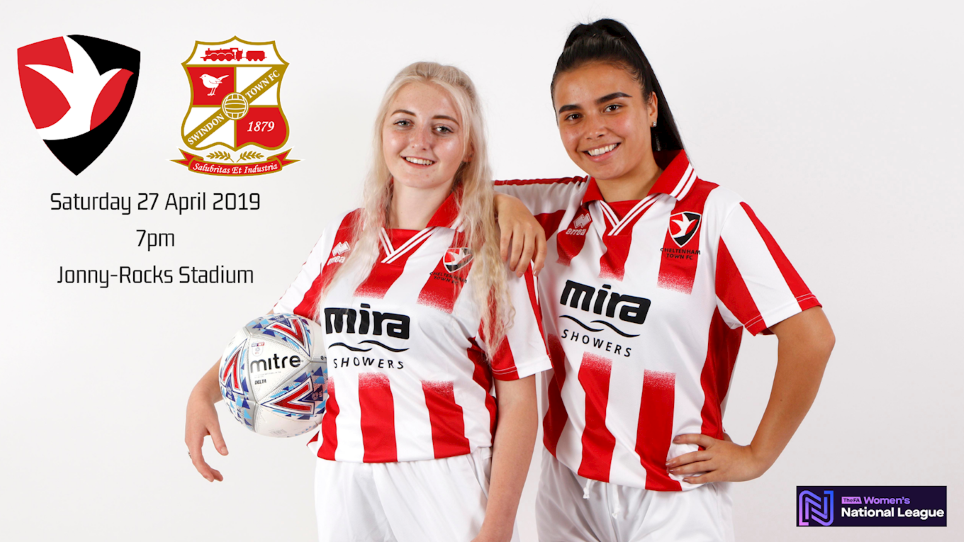 Ladies to take on Swindon Town at the Jonny-Rocks Stadium

An own goal and first half finishes from Kevin Dawson and Billy Waters ensured it was a happy home finale for Cheltenham Town as their goals helped earn hard-fought victory in their local derby against Swindon Town.

Two late strikes from Swindon strikers Theo Robinson and Marc Richards made it a nervy end to the game for the home side, but they held on to continue their fine home form this year in the final home match of the campaign at the Jonny-Rocks Stadium.

The visitors had a very early chance to open the contest when Kyle Bennett danced past a couple of Cheltenham challenges, but the midfielder failed to make the most of the opening as he blasted his effort high over the bar.

In an opening 45 which had few chances and despite seeing less of the ball, the Robins seized the initiative thanks to some bad decision making from the Swindon Town defence.

After working space in the middle of the field, Jacob Maddox spread the ball to right-back Long who had time and space to pick a cross and although no Robins players attacked the cross, Swindon defender Luke Woolfenden didn’t receive a call from his backline and his header fooled Luke McCormick in goal to give the home side the lead.

The Robins found confidence from their opener and doubled their lead just minutes later from a scrappy situation in the Swindon penalty area as both teams failed to head the ball in the desired direction.

However, striker Billy Waters was the last to get his head to the ball as he powered home Cheltenham’s second past the helpless McCormick.

It got even better for Duff’s men when Irishman midfielder Dawson got in on the scoring act to score his fifth of the campaign.

Conor Thomas’ deliveries were causing trouble before for the away side, but Cheltenham finally capitalised on the danger when captain Ben Tozer nodded Thomas’ delivery across goal, and the onrushing Dawson beat McCormick to the ball to put Cheltenham in a dominant position going into the second half.

A Swindon fightback in the second half was well dealt with by the Robins defence, who held a firm line and restricted the visitors’ presence in the game, although Michael Doughty did evade Cheltenham’s grasp from a set-piece at the beginning of the half to pull an effort off, but Robins keeper Flinders easily saw the ball fly over his crossbar.

It wasn’t all backs to the wall for the Robins in the second half and after keeping his spot in the team over first-choice left-back Chris Hussey, Cameron Pring enjoyed a mazy run down the wing after beating two Swindon defenders to put the ball on a plate for Waters in the box, and only a last ditch interception denied Cheltenham a fourth goal.

Despite a solid display for large parts of the second period, striker Theo Robinson netted a consolation goal for the visitors which meant the Robins have only kept one clean sheet in their last five home games.

Substitute Marc Richards put Cheltenham on their toes and despite a brilliant save from Flinders to hinder Swindon’s momentum, forward Richards was on hand to poke the ball home to give the Robins a scare going into the final four minutes of stoppage time but the Robins held on.

Ladies to take on Swindon Town at the Jonny-Rocks Stadium