In-form Cheltenham Town are back on the road this Saturday as the Robins travel to Stoke-on-Trent to face Port Vale in Sky Bet League Two (kick-off 3pm).

Cheltenham also won a league game away from the LCI Rail Stadium for the first time since February with their last outing, a convincing 2-0 victory over Chesterfield.

Port Vale, by comparison, have won just once this season in 12 league outings, a 3-1 win on the opening day against Crawley Town, and yet to win on home soil.

Port Vale have endured a difficult start to the season in Sky Bet League Two, with no win in the league since the opening day of the campaign forcing them into the bottom two.

The Stoke-on-Trent side have looked to stem the tide with the recent appointment of former Vale favourite Neil Aspin. He was in charge as the Valiants narrowly lost out 2-1 to Grimsby Town last weekend and insists his side are where they deserve to be on form to date.

He said: “The team are conceding too many goals and not scoring enough. We deserve to be where we are. Football doesn’t change that much; the priority has to be what we do in both boxes.

“On Saturday we started the game well and had a good tempo and we looked like scoring goals, but in the second half we looked vulnerable and for a 20-minute spell we looked like we would concede. So, we must do better in both boxes.

Cheltenham team news: Freddie Hinds will come back into contention, after missing the victory over Swindon through illness. Midfielder Kevin Dawson is also pushing for a return after a knee injury. Jaanai Gordon and Jordon Forster remain long-term injury casualties.

Port Vale team news: The clash at Vale Park is likely to come too soon for winger Cristian Montano. The Colombian, who has been out for the past six weeks with a hamstring injury, stepped up his comeback by playing for the reserves in midweek but he is not yet considered ready for first-team action.

Lancashire official Scott Oldham – who has handed out 22 yellow cards and two red card in nine league and cup games this season - will take charge of the league encounter at Vale Park. A self-employed joiner away football, he handed out 49 yellow cards in 18 games last season without sending a single player off as he was promoted to the EFL referee list. Referee Oldham took charge of Cheltenham’s win over Crawley at the start of the season. He will be assisted by David Plowright, Joe Simpson and fourth official Matthew Parry.

We are taking bookings NOW for a second coach to Port Vale away this Saturday in Sky Bet League Two – and tickets for the clash at Vale Park remain on sale on Friday.

Tickets for this match are on sale until Friday at 2pm from our Ticket Office.

Prices from our office can be seen below and please note that there will be a £2 increase if purchased on the day at the stadium at the away ticket kiosk – please note, this is a cash only kiosk.

A second coach is now travelling to Port Vale – but please act quickly to ensure a place! The bus will at 11am with places available for the following prices:

For further information call the Ticket Office at the LCI Rail Stadium on 01242 573558 (option 1) or email our Ticket Office Manager, Luke James, via tickets@ctfc.com

The home side took a half-time lead in the Sky Bet League Two clash courtesy of Pope who struck with a bullet header.

A clinical second half volley from Ben Whitfield and second from Pope - his fifth in two games against the Robins - wrapped up all three points.

The Robins will now be looking to target back-to-back home games with Grimsby and Lincoln at the LCI Rail Stadium in the coming seven days for an immediate response.

Manager Gary Johnson retained the side that had played in the derby with Swindon last weekend, but welcomed back Dawson and Freddie Hinds to the bench.

To the backdrop of sunny skies, it was the home side that made the early running while the Robins looked to break at pace when possible.

Full back Jordan Cranston started one attack from deep with a neat nutmeg before Brian Graham's through ball saw Mo Eisa tumble on the edge of the box.

Graham was showing some neat touches to try and give Cheltenham an outlet while Vale forward Pope had the game's first real opportunity when he twice had shots blocked in the penalty area.

Midfielder Harry Pell broke the home offside trap down the right wing, but his fizzing ball flew across the six yard box and evaded both Graham and Eisa.

Goalkeeper Scott Flinders had to get down quick to his left to deny a Pope snap shot at the other end at the mid-point of the first half.

But it was to be only a temporary reprieve for the visitors as just minutes later a teasing right wing ball by James Gibbons was met by Pope who powered a header into the right corner of the net.

Vale were inches from doubling that lead when Harness got a shot off, after a scramble in the box, and the deflection beat Flinders but ran wide of the post.

Eisa looked to inject life into the Robins as he drove into the penalty area to win a corner. But Joe Morrell's deep ball was smashed over the bar at the back post by Kyle Storer.

Instead it was Pope who could have grabbed another just before the interval when a shot from Dave Worrall ballooned kindly into his path, but he drilled his shot wide.

Cheltenham made a double half-time change to spark a second half comeback, with Dawson and Danny Wright on for Storer and Graham.

It looked set to pay dividends only for Eisa to be denied by a brilliant point blank save from home stopper Kelle Roos, after Dawson, Sellars and Wright had combined to win a free kick.

The Robins suddenly looked dangerous with Wright glancing a corner wide of the target before nearly connecting with another tempting ball back in from Cranston.

But then, against the run of play, the home side doubled their lead when the ball fell to Whitfied who hit a crunching volley from the edge of the box into the far corner.

Johnson made his final change, as Hinds was introduced, and he nearly had an immediate impression when his angled shot rattled the bar, although the offside flag would have denied him.

However, with Cheltenham committing men upfield, the hosts struck for a third time when Pope stole the ball on the edge of the box and poked it past the onrushing Flinders and then into an empty net.

Dawson struck a late consoltion for the Robins when he smashed in a close range effort, after Hinds and Carl Winchester had been denied.

We are taking bookings for a second coach to Port Vale away this Saturday in Sky Bet League Two – and tickets for the clash at Vale Park remain on sale from the Ticket Office until 2pm on Friday afternoon.

Due to demand from supporters, a second coach will now be travelling to Stoke-on-Trent for the big league encounter!

Tickets for this match are on sale until Friday at 2pm from our Ticket Office.

Prices from our office can be seen below and please note that there will be a £2 increase if purchased on the day at the stadium at the away ticket kiosk – please note, this is a cash only kiosk.

Wheelchair tickets can be bought directly from Port Vale ticket office by calling 01782 655821.

A second coach is now travelling to Port Vale – but please act quickly to ensure a place! The bus will leave at 11am with places available for the following prices:

For further information call the Ticket Office during opening hours at the LCI Rail Stadium on 01242 573558 (option 1) or email our Ticket Office Manager, Luke James, via tickets@ctfc.com 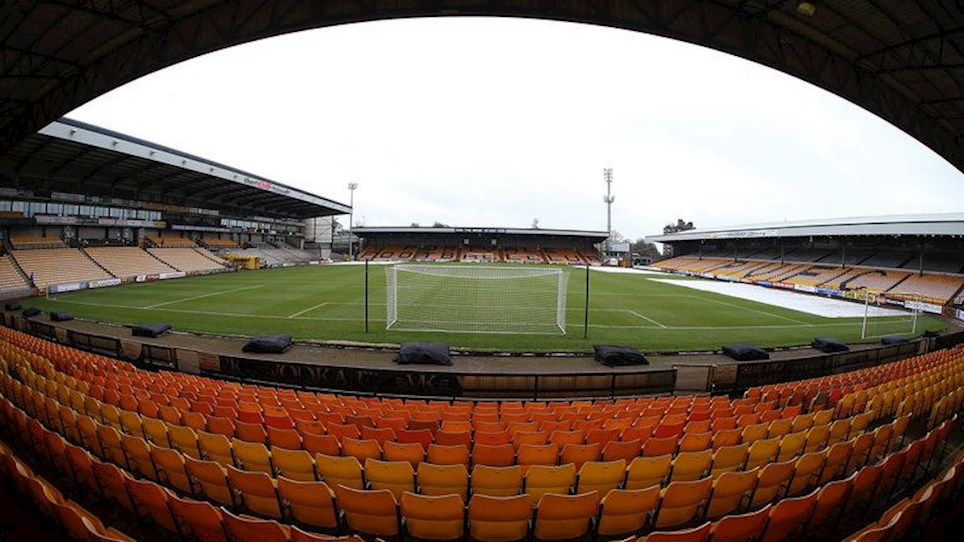 
Cheltenham Town are away from home on Saturday, October 14 when we visit Port Vale in Sky Bet League Two (kick-off 3pm) – and full ticket and travel news is now available.