After the Beast from the East finally subsided, the action returns as Cheltenham Town face Notts County in a big Sky Bet League Two encounter at the LCI Rail Stadium on Tuesday (kick-off 7.45pm).

The original clash was due to be played on Saturday afternoon, but a frozen pitch, adverse weather conditions and spectator safety all meant the game was postponed until in the week.

The Robins secured an impressive draw at league leaders Luton Town last time out at Kenilworth Road – and were minutes from taking all three points.

The Magpies – currently fourth in the standings – won 2-0 at Stevenage last time out with goals from Jorge Grant and Shola Ameobi.

Notts County won 3-1 when the teams last met in November, with Carl Winchester scoring the Cheltenham goal at Meadow Lane.

Notts County manager Kevin Nolan insists the 'the buzz' has returned to his squad ahead of Tuesday's rearranged trip to Cheltenham Town.

The Magpies banished the memories of a 1-0 defeat to Cambridge United by claiming their third home win on the bounce with a solid 2-0 victory against Stevenage.

"You could feel the lads were getting that buzz back this week on the back of a really good, solid performance," Nolan told nottscountyfc.co.uk.

“Cheltenham are a good team - they did OK down at our place and caused us some problems.

"They have had some good results at home and they’ve got Mohamed Eisa, who is one of the leading scorers in the league.

“He scored last week and they will be full of confidence coming away from a draw at Luton.

“Hopefully it will be a good game between two teams intent on winning."

Cheltenham team news: Manager Gary Johnson will be without midfielder Harry Pell as he begins a two-match suspension after picking up ten yellow cards this season.

Notts County team news: The Magpies will be without goalkeeper Ross Fitzsimons after he was involved in a road traffic collision on Monday morning.The stopper sustained no serious injuries but has stayed in Nottingham rather than travel for the fixture.

Referee Graham Horwood – who has taken charge of 19 games this season and handed out 59 yellow cards and one red card - will take charge of the league clash at the LCI Rail Stadium. He has refereed the Robins once this season – the epic 4-3 win over Oxford in the cup in August. He will be assisted by Darren Wilding, Thomas Harty and fourth official Ronald Granfield.

Fans with tickets for the original date on Saturday are reminded that these tickets ARE valid for Tuesday’s game. Please use them to gain entry into the stadium.

Supporters are advised the car park at the LCI Rail Stadium is FULL and no matchday sales will be available. Only those with pre-booked passes should park at the stadium. 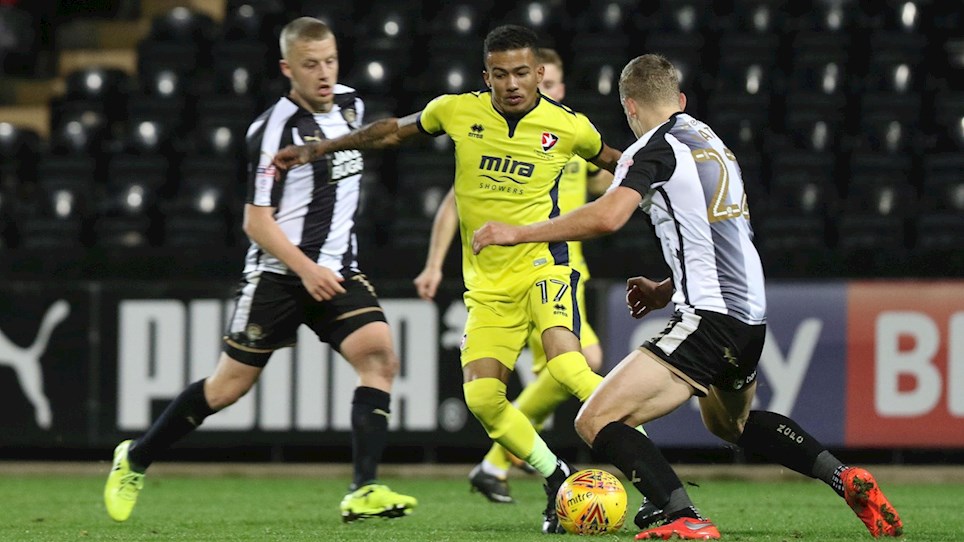 
Supporters are advised that the Sky Bet League Two fixture with Notts County has been officially moved to Tuesday (March 6) with a 7.45pm kick-off. 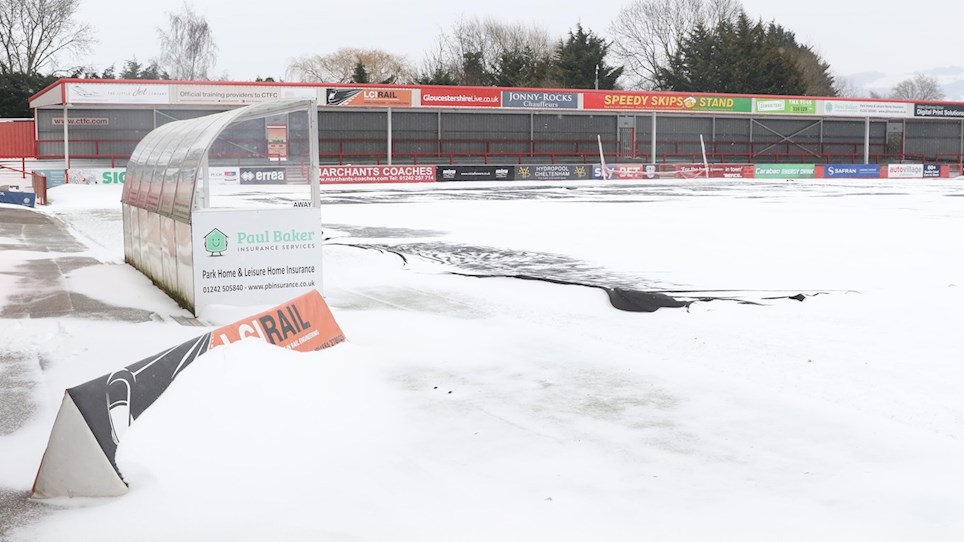 
The Sky Bet League Two fixture against Notts County - due to played on Saturday afternoon - has today been postponed following a pitch inspection.

The visitors were unbeaten in five versus Cheltenham, and that record looked set to be extended when Terry Hawkridge fired in the opener just three minutes before half-time when controlling and then converting Jon Stead’s low driven cross from the left-hand side.

But Morrell’s second goal in two matches brought the Robins level after 66 minutes when he hit a low long-range shot that was deflected into the net past Adam Collin.

Substitute Brian Graham had three chances to win it during the second period, but Collin was equal to all of them and despite a spirited late push for all three points, the hosts had to settle for a draw.

Gary Johnson made one change to the team that drew at table toppers Luton Town, as the suspended Harry Pell was replaced by Jake Andrews.

Bristol City loanee Andrews was making his first start for the Robins after one substitute appearance against Port Vale, coming in for Pell at right midfield in a 4-5-1 formation.

Cheltenham started with plenty of intent as Ilias Chatzitheodoridis and Kevin Dawson combined neatly on the left before the latter crossed for Mo Eisa, but the Robins’ top scorer saw his cut back blocked and cleared.

Dawson then attempted the spectacular when Andrews whipped a cross into the box from the wide right, but the Irishman failed to make a connection with his bicycle-kick.

Stead, who scored twice when the Magpies won 3-2 at Whaddon Road last season, then smashed a powerful cross into the middle but nobody could get onto the end of it.

Some neat play in middle then lead to a chance for Eisa, but despite wriggling clear of his marker, the Sudan-born forward could only flash his effort wide.

The action really started to heat up after 15 minutes, as Taylor Moore’s soft header back to Scott Flinders was intercepted by Stead, who fell over after trying to turn the goalkeeper, but no penalty was given.

That prompted wild protests from the visiting bench, and more pressure from Notts County was to follow but to no avail as the Robins held firm at the back.

The lively Stead then ran onto a quick free-kick from Jorge Grant, but Flinders just managed to deflect his shot away from a tight angle as Kevin Nolan’s side started to grow into the game.

With ten minutes to go until the interval, the match settled down with few clear-cut chances until the hosts played their best move of the game.

Dawson played a sublime pass from left to right with Andrews controlling excellently, but Carl Winchester couldn’t turn in his dinked cross to the far post.

Coincidentally, Notts County then enjoyed their best pattern of play, and when Stead busted into the penalty box, his cut-back was slammed into the roof of the net by Hawkridge for his second goal of the campaign to give Nolan’s team a late first half lead.

Johnson made a double substitution at half-time, as Graham and Joe Rodon replaced full-backs Moore and Chatzitheodoridis.

The Robins went about trying to get back into the match straight away, as Andrews crossed to the back post where Daniel Jones managed an important headed interception to concede a corner just as Dawson looked set to get a touch.

As Johnson’s side pushed forward they were nearly caught on the counter attack as Grant broke away and played a one-two with Shola Ameobi, but Grant’s effort on the slide was eventually gathered by Flinders.

Rodon then turned a dangerous cross out for a corner, and the resulting set-piece was volleyed into the side netting by Ameobi as the visitors sought to double their lead just past the hour mark.

But it was the Robins who equalised in the 66th minute, as Joe Morrell, who scored a cracker against Luton last time out, hit a deflected shot from around 25-yards-out to bring Cheltenham back on level terms.

The home crowd started to find their voice as Graham then tested Collin twice, forcing the County stopper to push his shot wide after super play, before rolling another effort into his arms from just inside the box.

The Scottish forward then had a one-on-one shot blocked by the keeper, and Eisa’s follow up was blasted over the crossbar on the half-volley as Cheltenham went all out attack in search of a winner.

Jerell Sellars was fouled right on the edge of the penalty area after 84 minutes and Eisa curled the resulting set-piece inches wide of the top corner as Cheltenham did all they could to net a winner, but had to settle for a point.


Supporters are advised that the Sky Bet League Two fixture with Notts County has been officially moved to Tuesday (March 6) with a 7.45pm kick-off.


The Sky Bet League Two fixture against Notts County - due to played on Saturday afternoon - has today been postponed following a pitch inspection.

Fans are advised that tickets for Tuesday’s Sky Bet League Two encounter with Notts County at the LCI Rail Stadium (kick-off 3pm) will be available from the Ticket Office right up until kick-off.

Fans with tickets for the original date on Saturday are reminded that these tickets ARE valid for Tuesday’s game. Please use them to gain entry into the stadium.

The car park is FULL and no matchday sales will be available.

In order to collect your tickets, please remember you will need to quote your name and postcode at the relevant collection points.

Fans are reminded that access to the Robins Nest bar on matchdays is always on a first come, first served basis and if the bar reaches capacity there will be no further admittance. Please arrive early to avoid any disappointment.